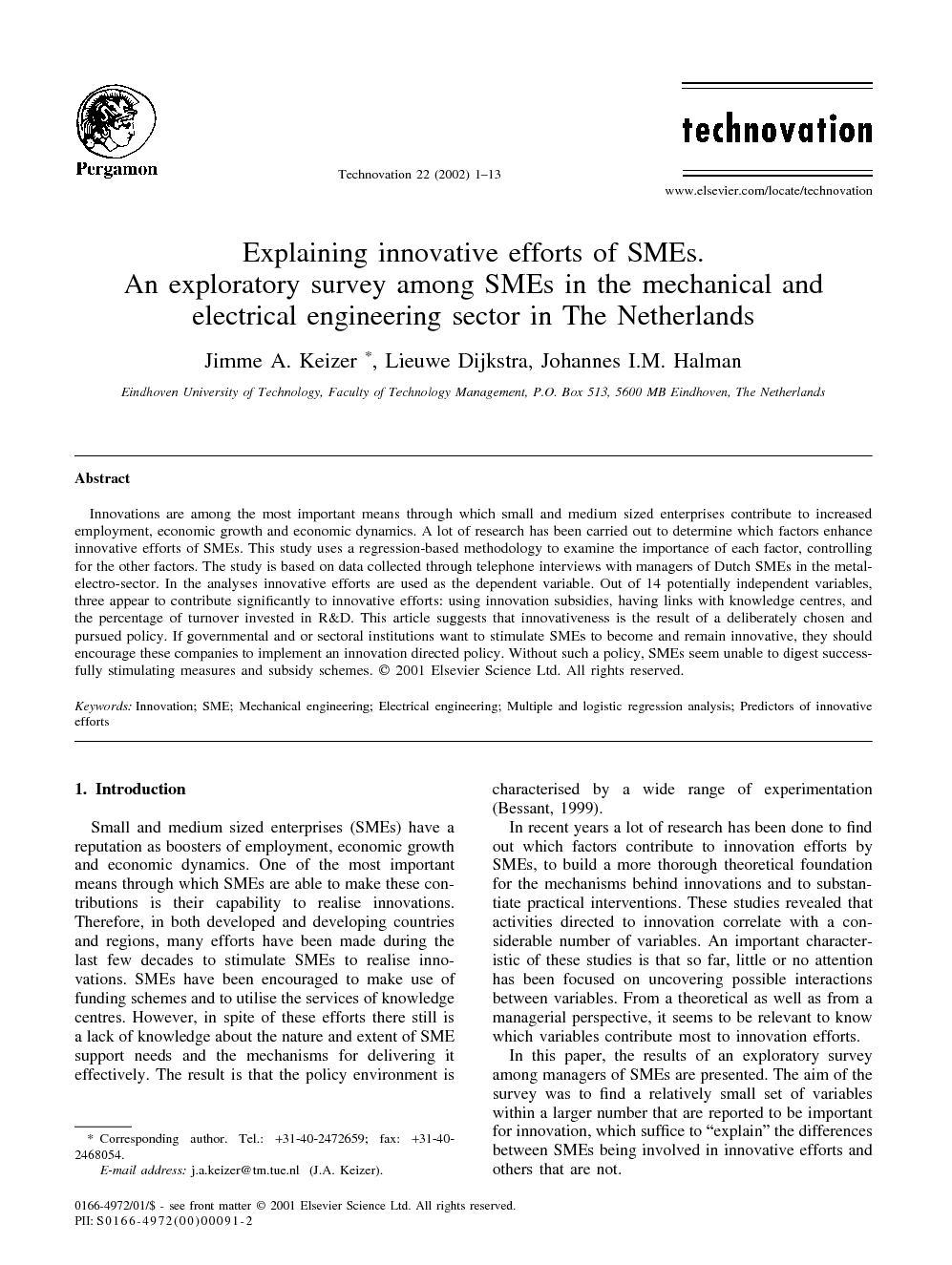 Innovations are among the most important means through which small and medium sized enterprises contribute to increased employment, economic growth and economic dynamics. A lot of research has been carried out to determine which factors enhance innovative efforts of SMEs. This study uses a regression-based methodology to examine the importance of each factor, controlling for the other factors. The study is based on data collected through telephone interviews with managers of Dutch SMEs in the metal-electro-sector. In the analyses innovative efforts are used as the dependent variable. Out of 14 potentially independent variables, three appear to contribute significantly to innovative efforts: using innovation subsidies, having links with knowledge centres, and the percentage of turnover invested in R&D. This article suggests that innovativeness is the result of a deliberately chosen and pursued policy. If governmental and or sectoral institutions want to stimulate SMEs to become and remain innovative, they should encourage these companies to implement an innovation directed policy. Without such a policy, SMEs seem unable to digest successfully stimulating measures and subsidy schemes.

Small and medium sized enterprises (SMEs) have a reputation as boosters of employment, economic growth and economic dynamics. One of the most important means through which SMEs are able to make these contributions is their capability to realise innovations. Therefore, in both developed and developing countries and regions, many efforts have been made during the last few decades to stimulate SMEs to realise innovations. SMEs have been encouraged to make use of funding schemes and to utilise the services of knowledge centres. However, in spite of these efforts there still is a lack of knowledge about the nature and extent of SME support needs and the mechanisms for delivering it effectively. The result is that the policy environment is characterised by a wide range of experimentation (Bessant, 1999). In recent years a lot of research has been done to find out which factors contribute to innovation efforts by SMEs, to build a more thorough theoretical foundation for the mechanisms behind innovations and to substantiate practical interventions. These studies revealed that activities directed to innovation correlate with a considerable number of variables. An important characteristic of these studies is that so far, little or no attention has been focused on uncovering possible interactions between variables. From a theoretical as well as from a managerial perspective, it seems to be relevant to know which variables contribute most to innovation efforts. In this paper, the results of an exploratory survey among managers of SMEs are presented. The aim of the survey was to find a relatively small set of variables within a larger number that are reported to be important for innovation, which suffice to “explain” the differences between SMEs being involved in innovative efforts and others that are not. First, the conceptual background will be described. It includes a literature review of recent publications about variables contributing to innovation efforts of SMEs. Next the survey's design and methodological set-up are explained. After that, the results of the statistical analysis and the interpretation of the results are presented. Finally, we discuss the major findings.