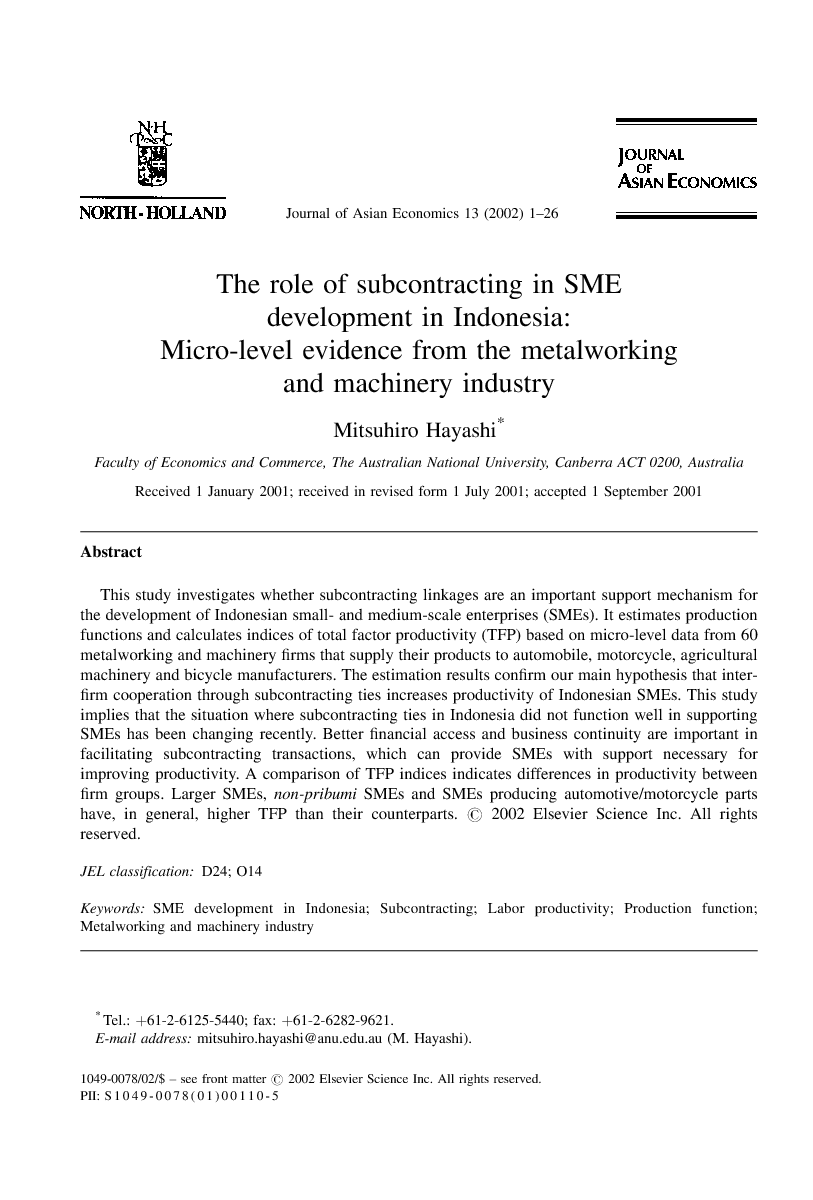 This study investigates whether subcontracting linkages are an important support mechanism for the development of Indonesian small- and medium-scale enterprises (SMEs). It estimates production functions and calculates indices of total factor productivity (TFP) based on micro-level data from 60 metalworking and machinery firms that supply their products to automobile, motorcycle, agricultural machinery and bicycle manufacturers. The estimation results confirm our main hypothesis that inter-firm cooperation through subcontracting ties increases productivity of Indonesian SMEs. This study implies that the situation where subcontracting ties in Indonesia did not function well in supporting SMEs has been changing recently. Better financial access and business continuity are important in facilitating subcontracting transactions, which can provide SMEs with support necessary for improving productivity. A comparison of TFP indices indicates differences in productivity between firm groups. Larger SMEs, non-pribumi SMEs and SMEs producing automotive/motorcycle parts have, in general, higher TFP than their counterparts.

As illustrated in the above, due to measurement errors in capital stock, the production elasticity of capital may be underestimated in this study, and this results in biases in the estimated production functions. Besides, the sample size was relatively small and some of the data obtained from our field survey were affected by the crisis.25 Despite these shortcomings, our micro-level evidence from the metalworking and machinery industry yields the following findings, which answer the three questions set forth in the introduction. With regard to the first question, this study found that the role of subcontracting linkages in improving labor productivity of SMEs is pivotal. According to the estimated production functions, the subcontracting ratio is the dominant variable in explaining variation in labor productivity. Also, indices of TFP vary in line with contribution of subcontracting to TFP. These findings confirm our hypothesis that inter-firm cooperation through subcontracting ties can increase productivity in small–medium metalworking and machinery firms in Indonesia. Earlier research represented by Thee (1985) and his colleagues argued that subcontracting networks in the Indonesian machinery industry were weak and did not provide SMEs with opportunities to sufficiently improve technical and other capabilities. However, our findings point to a different conclusion, indicating that subcontracting linkages are strengthening and are beneficial to SMEs in improving their productivity. This quantitatively supports recent studies by, for instance, Berry and Levy (1999), Harianto (1996), Hayashi (2000) and Sato (1998), which observed the development of subcontracting networks and the provision of support to SMEs through such linkages in the process of industrialization in Indonesia. The difference between Thee’s findings in the 1980s and ours in the 1990s would be attributed to the progress of industrialization in Indonesia and changes in industrial organizations during the last 10–20 years. Also, there is a possibility that such different pictures appeared because the two parties analyzed different SME groups. Thee and his colleagues focused on smaller SMEs in the diesel machinery subsector, while this study covered not only smaller SMEs in the agricultural machinery subsector but also larger SMEs in the automobile and motorcycle subsectors. This point is what we discuss in our third question and answer described below. The estimated production functions provided additional findings in relation to factors for increasing labor productivity. Higher levels of formal education and better financial access are positively related with labor productivity of SMEs. Concerning our second question, the estimation of subcontracting ratio functions reveals that better financial access and business continuity are important in facilitating subcontracting transactions, which can provide SMEs with support necessary for improving productivity. These findings imply that financial capabilities and creditworthiness are required to expand subcontracting transactions. Parent firms are likely to prefer supplier firms that are reliable, are able to maintain production stable and have reasonably modern production facilities. On the last question, the estimated subcontracting ratio functions illustrate that non-pribumi owners expand subcontracting businesses more easily than their counterparts. While different firm groups in other firm categories (i.e., firm size and subsector) did not significantly affect the levels of labor productivity and subcontracting transactions, most of the signs of the coefficients related to such firm categories were consistent with the initial expectations. Based on the comparison of TFP indices, larger SMEs, non-pribumi SMEs and SMEs supplying automotive and motorcycle parts have, in general, higher TFP than smaller SMEs, pribumi SMEs and SMEs producing agricultural machinery and bicycle parts. The results indicate that there are differences in the level of total factor productivity between the former and the latter SME group in each firm category of firm size, ethnic affiliation of entrepreneurs and subsector. These differences are consistent with the conclusions of previous studies by Berry and Levy (1999, p. 70) and Hayashi (2000, p. 282). They pointed out that, compared with their counterparts, larger SMEs and non-pribumi SMEs have better access to support mechanisms, in particular subcontracting linkages, in the private sector, which provide SMEs with low transaction costs. Different SME groups have uneven access to subcontracting networks and this may be one of the key factors that explain differences in the efficiency of production.