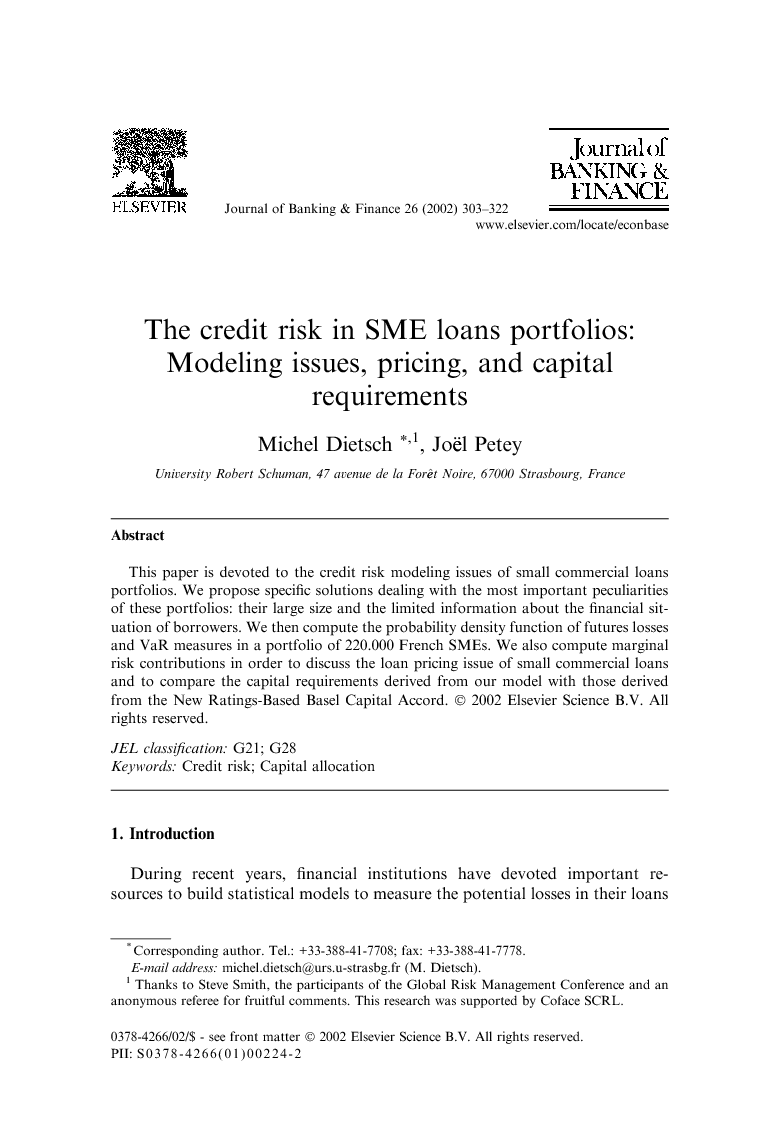 This paper is devoted to the credit risk modeling issues of small commercial loans portfolios. We propose specific solutions dealing with the most important peculiarities of these portfolios: their large size and the limited information about the financial situation of borrowers. We then compute the probability density function of futures losses and VaR measures in a portfolio of 220.000 French SMEs. We also compute marginal risk contributions in order to discuss the loan pricing issue of small commercial loans and to compare the capital requirements derived from our model with those derived from the New Ratings-Based Basel Capital Accord.

During recent years, financial institutions have devoted important resources to build statistical models to measure the potential losses in their loans portfolios. Supervisors have recognized such efforts. The New Basel Capital Accord allows banks to compute the minimum capital requirements using an internal ratings based (IRB) approach which is founded on the most sophisticated credit risk internal models. However, most of the current models have considered the credit risk in wholesale commercial loans portfolios. Few attempts have been devoted to small commercial loans credit risk, despite the relatively high share of SME exposures in the banks loans portfolios, especially in Europe. The first objective of this paper is to present a Value at Risk model of the SME credit risk dealing with the specific methodological problems which arise in the modeling of small commercial loans portfolios. Several factors distinguish credit risk in small and wholesale commercial loans portfolios. First, the primary credit risk of small business loans is that they will not be repaid. The SME credits are not traded in organized financial markets and their value does not change until maturity, except if the borrower defaults. This restricts the modeling choice to the default mode paradigm (Jones, 1998), while wholesale commercial loans credit risk models are “multi-state” or “Marked-To-Market” models which incorporate transition probabilities between non-default rating classes. Second, the size of a small commercial loans portfolio is larger than that of a large corporate loans portfolio. While the latter contains hundreds of loans, the former contains thousands of loans. Consequently, it is very difficult to adopt the methodological choices which are used in the models dealing with large corporate exposures, like CreditMetrics, CreditRisk+ or KMV. In particular, it would consume too much time to simulate directly potential losses at the individual level, as it is the case in the CreditMetrics model (Bathia et al., 1997), for example. Methodological choices are restricted by time constraints. Consequently, a retail credit risk model should proceed in two separate steps: the first step should be devoted to the simulation of the number of defaults into each risk class, the second step to the simulation of the amount of individual losses given default (LGD). Third, data limitations also restrict the modeling choices. The wholesale commercial loans models use a rich information concerning companies financial health which comes from rating agencies and financial markets prices. In general, this information is available in the form of time series. It allows to assess the long run stability of the main building blocks of any credit risk model (default probabilities (PDs), loans losses given default, and correlations). It also allows to derive analytically the probability distribution of potential losses or to proceed to historical simulations. In the small business case, the relevant information is reduced to default scores. This is the reason why the credit risk model should build the loss density function by using the information given by the volatility of scores. The final objective of any credit risk model is to build the probability density function (PDF) of future losses in a loans portfolio. In the case of small commercial loans portfolios, this implies to find specific solutions to the two main problems of the modeling process: the modeling of the PD, and the construction of the joint distribution of losses taking into account correlations between default in the portfolio. Concerning the first problem, we present two alternative frameworks to model PD, a probit model and a model using a gamma distribution. Concerning the second problem, we propose specific solutions to compute the PDF in large commercial loans portfolios. We applied these solutions by using a panel of more than 220.000 French SME provided by a large French credit insurance company (Coface SCRL). For each small business, this panel gives two types of information. First information is a default score. This allows to rank borrowers in risk classes and to compute the PDs. The second is the balance sheet amount of the firm bank debt. This panel contains more than two thirds of all incorporated French SME. Consequently, it is as if we had measured the credit risk exposure of a large single bank which would own nearly all the French small commercial loans. The paper is organized as follows: Section 2 presents the general structure of a small commercial loans credit risk model and the methodological solutions dealing with the peculiarities of small commercial loans portfolios. Section 3 presents measures of the PDF of losses in a large portfolio of French SME loans, and it derives VaR measures for credit risk. Section 4 is devoted to the calculation of marginal risk contributions and to the issue of economic capital allocation. Section 5 compares the bank capital requirements derived from our internal SME model with those derived from the new IRB “advanced” approach proposed by the Basel Committee (Basel Committee on Banking Supervision, 2001). Section 6 discusses the loan pricing issue of SME commercial loans and Section 7 concludes the paper.

In this paper, we proposed an internal credit risk model for SME loans. This model allowed us to compute the Value-at-Risk of any large portfolio of small commercial loans and to derive the allocation of capital and loans pricing schemes for this kind of loans. The methodology was applied to a very large sample of French SME data base. Given the size of the data base, we were able to measure the global risk of all the French SME sector, as if one single bank would own all the small and medium businesses loans in its portfolio. Some conclusions can be drawn from our applications. First, the capital requirements derived from an internal model are significantly lower than those derived by the standard capital ratio and the new IRB approach as well. These differences between the capital requirements could be partially explained as a consequence of the low values of the default correlations in our SME sample over the 1995–1999 period we considered (during this period, the state of the economy was rather good). Over a longer time period, one likely would have observed larger values of the default volatilities, what could have increased the correlation values. These differences could also be the consequence of the choice of a short – one year – planning horizon. Over a longer horizon, losses would accumulate, which would make it necessary to increase the capital requirements level. These differences could also be the consequence of the diversification effects stemming from the large size of the sample. In smaller loan portfolios, the diversification would be lower, which would induce higher capital requirements. Moreover, our results demonstrate the interest of internal credit risk models explicitly taking into account the correlation among the exposures, even in the case of retail portfolios. Secondly, the results verify that one of the main advantages of an internal credit risk model is to lead to a better allocation of capital and to better loan pricing.