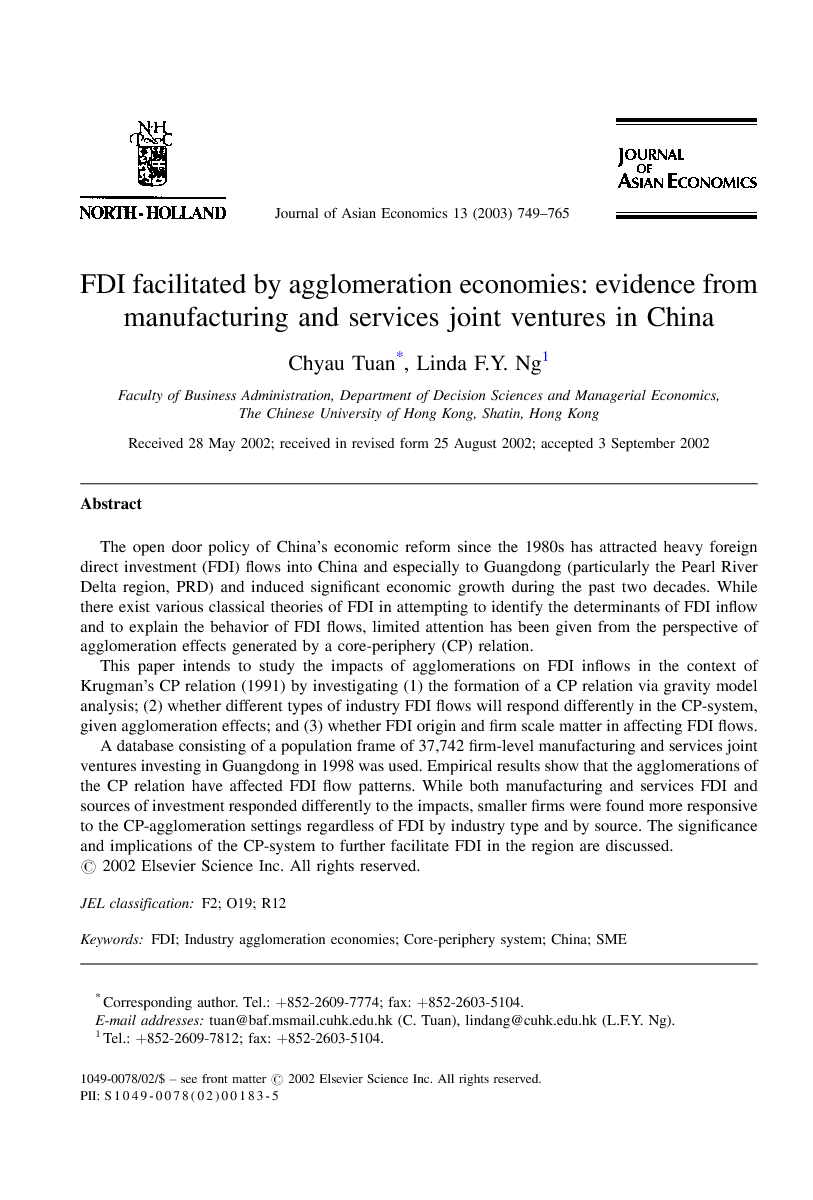 The open door policy of China’s economic reform since the 1980s has attracted heavy foreign direct investment (FDI) flows into China and especially to Guangdong (particularly the Pearl River Delta region, PRD) and induced significant economic growth during the past two decades. While there exist various classical theories of FDI in attempting to identify the determinants of FDI inflow and to explain the behavior of FDI flows, limited attention has been given from the perspective of agglomeration effects generated by a core-periphery (CP) relation. This paper intends to study the impacts of agglomerations on FDI inflows in the context of Krugman’s CP relation (1991) by investigating (1) the formation of a CP relation via gravity model analysis; (2) whether different types of industry FDI flows will respond differently in the CP-system, given agglomeration effects; and (3) whether FDI origin and firm scale matter in affecting FDI flows. A database consisting of a population frame of 37,742 firm-level manufacturing and services joint ventures investing in Guangdong in 1998 was used. Empirical results show that the agglomerations of the CP relation have affected FDI flow patterns. While both manufacturing and services FDI and sources of investment responded differently to the impacts, smaller firms were found more responsive to the CP-agglomeration settings regardless of FDI by industry type and by source. The significance and implications of the CP-system to further facilitate FDI in the region are discussed.

With the huge influx of immigrants, technology, and capital from China after World War II, Hong Kong (HK) has attained her remarkable export-led economic growth via industrialization. GDP growth in real terms recorded 10.1% and 9.8%, on the average, during the periods of 1960–1970 and 1970–1980, respectively. As one of the Asian Newly Industrialized Economies (NIEs), HK’s manufacturing together with the growing service sector, in particular in banking and finance, had transformed HK to become a successful city economy in many aspects ever since the 1970s. On the other hand, HK’s “passive” industry policy also made the private business sector to initiate industry upgrade less viable for manufacturing which is mainly dominated by small, labor intensive firms (Tuan & Ng, 1995c). The situation was even more critical in the late 1970s when considering her eroding competitive edge, given the facts that HK’s World market competitors and the other Asian NIEs had been seriously adopting more proactive policy to push for the development of high technology industries such as industrial electronics, information, and communications (Tuan & Ng, 1995a). The economic opening of China in about the same time provided HK an alternative to achieve sustained economic growth. Given China’s preferential FDI policies and establishments of the four Special Economic Zones (SEZs) with three of which located in the proximate Guangdong province,1 HK’s manufacturing FDI first started in Guangdong in the form of sub-contracting and subsequently other various forms of cross-border operations including plant relocations so as to reduce manufacturing production costs and maintain its competitive edge in the World market (Tuan & Ng, 1994). With such an outward processing production, HK continued to enjoy her export and re-export led economic growth until the late 1990s (Tuan & Ng, 1998). Before the contagion effect of the 1997 Asian financial crisis finally hit HK in 1998, the real growth rate during the 1981–1997 period, on the average, was 5.8%. At the same time, Guangdong also earned the world’s attention with her accelerated economic growth via merchandize export-led growth by the continuous influx of inward FDI (Vogel, 1989). The outward investment activities from HK to Guangdong during the 1980–1990 period can be easily explained by low input costs and advantage of early economic opening of Guangdong province. However, the successful experience during the following decade of 1990s would find difficulties to rely on the same explanation given the soaring input costs in Pearl River Delta (PRD) than other newly opened regions and more favorable FDI policies and implementations in other coastal areas and inland provinces in China. Despite of the vigorous competitions from other regions in China, Guangdong is still the largest recipient of inward FDI in China to attain profound record in sustained economic growth. HK’s share declined from 95% ($0.6 billion) of all inward FDI to Guangdong in 1986 to around 60% ($7.3 billion) in 1999. At the same time, Guangdong remained the top ranked host location to accommodate HK outward direct investment. By the end of 1998, 53% of HK’s total outward direct investment went out of China of which 65% was hosted by Guangdong (HK Government FDI Survey, 1999). It is highly interesting to explore why Guangdong has been able to continuously attract and mobilize the largest share of FDI flows from HK and other sources into China and especially to Guangdong’s PRD region during this latter period. To follow, a critical question to ask might be “what is the most appropriate or satisfactory approach to explain the economic growth experience in HK during the past two decades?” or “how should one appreciate what had happened in the region (HK–Guangdong and particularly PRD) with regard to the FDI inflows since China’s economic opening in 1979?” Besides the conventional views rooted from FDI theories, this paper attempts to investigate the solution from another perspective of the crucial effects of agglomeration economies provided by a core (HK with its proximate PRD as periphery) and the economic impacts and contributions arising from the formation of a CP-system. The objectives of this paper thus intend to study the impacts of agglomerations on FDI inflows in the CP-system. In specific, the specific aims include (1) to investigate and confirm the formation of a CP relation in Guangdong via gravity model analysis; (2) to investigate whether different types of industry (manufacturing versus services) FDI flows will respond differently in the CP-system, given the agglomeration effects; and (3) to further explore if the FDI origin and firm scale matter in determining the behavior of FDI flow patterns within the CP-system.

The past two decades of FDI flows of the case of HK–PRD region since the 1980s should have well demonstrated Krugman’s (1991) idea of a core-periphery system in which HK served as the city core to facilitate FDI in Guangdong and in particular, in the peripheral region of PRD. Agglomeration economies provided by the HK–PRD region contributed significantly to such a process. China’s accession into WTO in the late 2001 will bring in ample business opportunities which should further enhance the crucial role of the whole HK–PRD region with HK as a service-trading core and the growth of the CP-system as an enormous potential local market for foreign firms and investments. In explaining FDI especially in Guangdong, conventional FDI theories and agglomeration economies/diseconomies derived from urban spatial economics should be complementary. From the aspect of agglomeration economies, major lessons were established for better explanations of the contemporary FDI spatial flows in this region: (1) In the HK–PRD CP-system, both the core and peripheral region have offered complementary and non-separable dynamism for creating various kinds of agglomeration economies.14 In specific, superior infrastructural development, completeness of the tertiary industry, cost-(inputs) sharing, and transaction cost advantages, have facilitating such an “agglomeration”. (2) HK has a half-century history of the tradition of entrepreneurial, small-firm dominated business sector. The critical effects of agglomeration economies of the CP-system in FDI facilitation are particularly favorable to SMEs other than to large JVs. Other than the core being served as the stations or headquarters of multinationals, the HK–PRD CP-system offers an environment with comparative (agglomeration) advantages for entrepreneurial activities, especially for SMEs, to exploit the agglomeration economies of the system, such as external benefits of production networkings and linkages.15 (3) During the two decades of outward processing in the PRD peripheral region, both the production techniques and scale of industries had remained quite unchanged. However, the huge influx of FDI to Guangdong especially in the 1990s was rather difficult to be explained alone by the conventional FDI theories, given the excellent industrial foundation and supply of expertise provided by the Shanghai-Jiangsu region at that time as a keen competitor. The various forms of economies arising from agglomeration provided by the PRD region together with the gravity center (HK) as the service core should be another critical factor to attract continuous FDI flows from HK, Taiwan, and other sources into the HK–PRD CP-system and further fuel its sustained growth. (4) Whenever drawing lessons on stimulating regional development via FDI flows, such an agglomeration perspective will serve as an excellent demonstration for any future promotion of FDI into China especially the Shanghai–Jiangsu area and particularly, future considerations of regional growth in China via FDI facilitation. It is the authors’ reflection that only the Shanghai-Jiangsu region can possibly replicate the same degree of success being experienced by the HK–PRD region. (5) To promote sustained FDI inflows within this context, the building of a favorable investment environment to further develop and enhance the agglomeration economies generated within the system should be an immediate critical concern. More efforts in the building up a better investment environment in terms of a better government/government administration, less bureaucracy and restrictions on business operations, infrastructural supports and facilities, and favorable macroeconomic/FDI policies are crucial in this regard.16 Agglomeration economies have significantly facilitated FDI flows in the HK–PRD CP-system especially during the 1990s. However, the exact forms of agglomeration economies and the mechanisms through which it works to continue enhance sustained FDI inflows into the system remain crucial to be explored. In meeting the constant challenges arising from other economies or regions such as Singapore and the recent uprising keen competition from the Shanghai–Jiangsu region in China, the HK (core)–PRD (periphery) system functioning as an economic integral entity to leverage on the synergies arising from agglomerations and to expand the economic base is definitely a key solution for future success. In considering any future regional economic growth in other parts of China via FDI promotion, FDI facilitation via agglomeration economies attained by a CP-relation is essential for accomplishing growth.