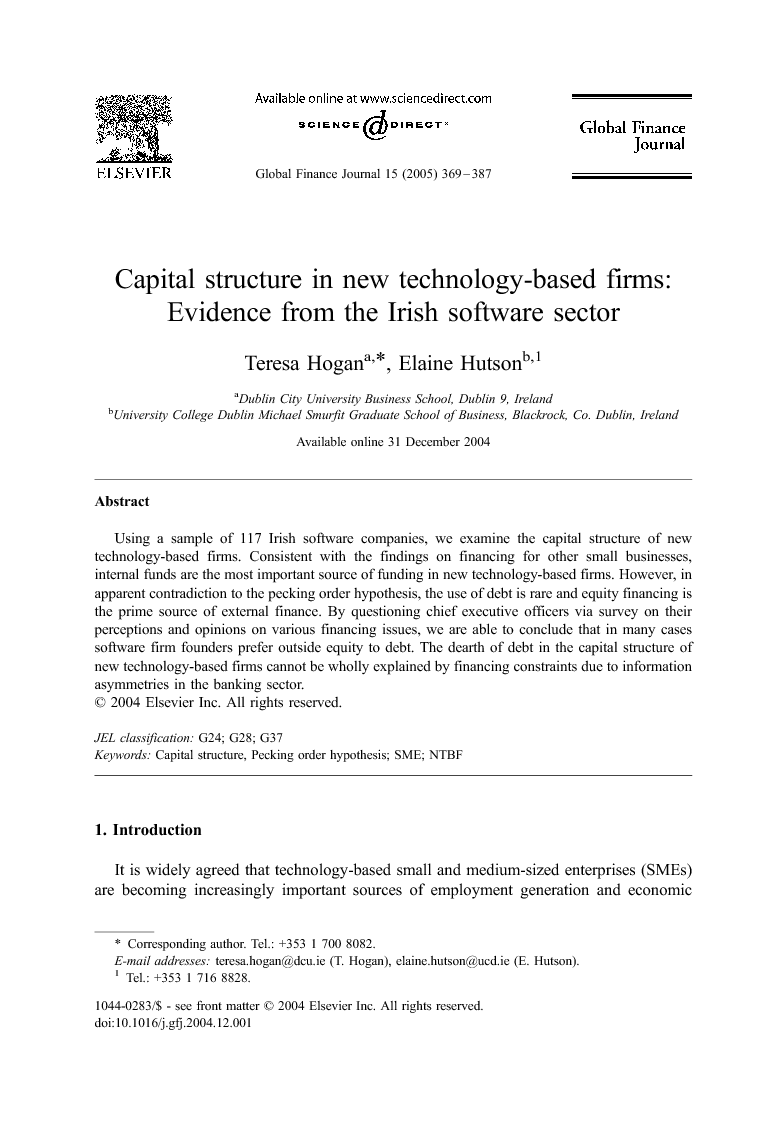 Using a sample of 117 Irish software companies, we examine the capital structure of new technology-based firms. Consistent with the findings on financing for other small businesses, internal funds are the most important source of funding in new technology-based firms. However, in apparent contradiction to the pecking order hypothesis, the use of debt is rare and equity financing is the prime source of external finance. By questioning chief executive officers via survey on their perceptions and opinions on various financing issues, we are able to conclude that in many cases software firm founders prefer outside equity to debt. The dearth of debt in the capital structure of new technology-based firms cannot be wholly explained by financing constraints due to information asymmetries in the banking sector.

It is widely agreed that technology-based small and medium-sized enterprises (SMEs) are becoming increasingly important sources of employment generation and economic growth. These so-called new technology-based firms (NTBFs)2 are important conduits for translating scientific knowledge into commercial products and processes, and play a vital role in the development and diffusion of innovation. Some of the world's largest technology companies—such as Apple, Dell, Gateway, Intel and Microsoft—all began as NTBFs in the United States less than 30 years ago. Although such ‘super-successful’ firms are less in evidence in Europe, the European Commission (2002) notes that European NTBFs generate significant employment, productivity and economic growth. The financing of NTBFs has consequently become an important issue around the world. A central concern has been that NTBFs may experience financing constraints, especially at start-up, that could impede their ability to grow and develop. Recent interest by policymakers, however, has not been matched by academic research on financing. This is primarily because financial data on NTBFs are not widely available, and owner-managers of SMEs are often reluctant to reveal private information on the financing of their firms. In this study we examine the financing of NTBFs using a sample of 117 privately held Irish software companies. Ireland is one of the top two producers of software products in the world.3 Irish-based manufacturers produce over 40 percent of all packaged software and 60 percent of all business software sold in Europe, and Ireland is the world's largest exporter of software services, generating over €8.5 billion in export revenue in 2000 (National Informatics Directorate, 2001). This remarkable performance is largely attributable to a number of multinational companies that have made Ireland their centre for European manufacturing and distribution. Over the past three decades, a robust indigenous software industry has grown up alongside the multinationals, engaged primarily in the development of highly specialised software products for export markets. It is these indigenous NTBFs that are the focus of our study. Our survey approach allowed us to source information directly from the founders of these firms on issues such as their motives for being in business, their financial goals, their preferred sources of finance, and their perceptions of asymmetries in debt and venture capital markets. We begin by presenting the essential features of our sample of indigenous Irish NTBFs—age, size by annual turnover and employment, and sources of finance. We show that, consistent with the pecking order hypothesis (POH) of Myers (1984) and Myers and Majluf (1984), internal funds are the most important source of finance. We also find that these NTBFs use outside equity in preference to debt. While this finding appears to contradict the predictions of the POH, which tends to hold for SMEs in general, it corroborates the findings of Oakey (1984) and Roberts, 1990 and Roberts, 1991 for US NTBFs, Moore (1994) for NTBFs in the UK, and more recently Hyytinen and Pajarinen (2002) for Finnish high-tech firms. Does this near-absence of debt in the capital structure of Irish NTBFs result from financing constraints? It is well understood that bank lending to SMEs and NTBFs is associated with information asymmetries that give rise to adverse selection and moral hazard (Stiglitz & Weiss, 1981). We find that owner-managers of Irish software firms perceive information asymmetries in the banking sector but not in venture capital markets, confirming that NTBF owner-managers recognise that venture capitalists are able to overcome information asymmetry problems. An alternate explanation for the preference for outside equity over debt in NTBFs is that it is the result of personal preference. It is well understood that the motivations and goals of SME owner-managers influence the financing decision. We argue that the key to understanding the difference in capital structure between NTBFs and SMEs in general is in owner-managers' motivations and goals. One of the strongest stylised facts from the small business literature is that the primary goal of small business owner-managers is independence and control. In our sample of indigenous Irish software firms the pursuit of innovation is the most important reason for being in business, and the main financial motivation of their owner-managers is to maximise the potential future selling value of their firm. We argue that the pursuit of innovation, which is an expensive goal in NTBFs because of their large capital requirements, coupled with the value maximisation goal, moderates the desire for control and independence. In essence, the founders of these firms are willing to forfeit independence and control in order to obtain the finance needed to create innovative, viable and potentially valuable businesses. The remainder of our paper is structured as follows. In the next section, we review previous work on the capital structure of SMEs and NTBFs. In Section 3, we describe our sample and survey methodology. Our results are presented and discussed in Section 4. Section 5 summarises our main findings and draws together our policy conclusions.

Financial constraints are commonly blamed for Europe's poor performance in nurturing high-technology business. In this paper we question whether the observed capital structure in NTBFs results from financing constraints, and propose that owner-manager preferences may also explain financing patterns. We report survey responses relating to the financing of 117 indigenous firms in the software product sector in Ireland. Consistent with the pecking order hypothesis (POH) of Myers (1984); Myers and Majluf (1984), we find that internal sources of funding dominate, both at start-up and on a continuing basis. In apparent contradiction to the POH, however, we provide evidence that equity rather than debt is the primary source of external financing. The split between inside and outside finance for our sample firms is close to 50/50, but the proportion of inside finance for start-up firms (those less than 2 years old) is considerably higher at 73 percent. Debt finance in the form of bank loans comprises a mere 4 percent of total financing for our sample firms, or 8 percent of outside finance. The majority of outside equity comprises participation from venture capitalists and angel investors. Consistent with the POH, our findings confirm that founders perceive severe information asymmetries between themselves and banks. Banks are viewed as being reluctant to provide funds to software product firms and require fixed assets as collateral. In contrast, most sample founders agreed that venture capitalists understood their businesses. While our evidence on capital structure in NTBFs is not consistent with an important prediction of the POH—that debt will be preferred to outside equity—we argue that it does not contradict the spirit of the POH. Myers' (1984) and Myers and Majluf's (1984) hypothesis is that firms will prefer sources of finance associated with least information asymmetry. Venture capital and angel finance is designed to overcome the severe information asymmetries that high-technology ventures commonly face in debt markets. The fact that outside equity dominates debt is not simply the result of financing constraints in debt markets. We argue that the motivations and goals of NTBF founders inform the financing decision, and that their objectives are quite different from those of other SME owner-managers. We find that the desire for independence is not as important to NTBFs as it is for SMEs in general; only 15 percent of founders claimed independence as the primary motive for being in business, and the most popular response to the question of most important motivation is the pursuit of innovation. This is an important finding, confirming that NTBF founders are less averse to the loss of control than SME owner-managers generally, for whom the independence motive has consistently been found to be paramount. It also confirms that because founders of high-technology ventures usually need large quantities of start-up capital, the goal of independence may be moderated by the goal of innovation. We also find that NTBF owner-managers would prefer to own a small proportion of a large company rather than own the whole of a much smaller business. Selling an equity stake in the business provides the necessary capital to allow the business to grow, possibly into a substantial firm. By asking the founders directly we confirm that NTBF founders actually prefer outside equity to debt. This evidence on founders' preferences shows that in general the financing outcomes of NTBFs—the dominance of internal sources, the dearth of long-term debt, and the popularity of external equity—is not simply a result of external financing constraints, but it is also the preferred outcome of decision-makers within the firm. Our findings have significant policy implications. This study provides evidence that equity is the preferred funding choice for founders in new technology-based industries. Ireland has well-developed venture capital and informal equity markets.7 In the absence of effective and efficient markets for private and venture capital, NTBFs will face severe funding restrictions. The result may be under- or sub-optimal investment, which constrains growth and may lead to firm failure. Under-investment at start-up has been linked to lower levels of growth in new technology-based firms in a number of studies (Lumme et al., 1994, Moore, 1994 and Roberts, 1991). The European Commission (1999) concluded that, in comparison with the US, the lack of a well-developed risk capital market is the key obstacle to the development of innovative firms in Europe. The clear message to policymakers is that new technology-based industries are funded by equity and not by debt. Governments that support formal venture capital markets and informal investment markets will be facilitating increased participation in the development and commercialisation of knowledge-based, high-potential business ideas.