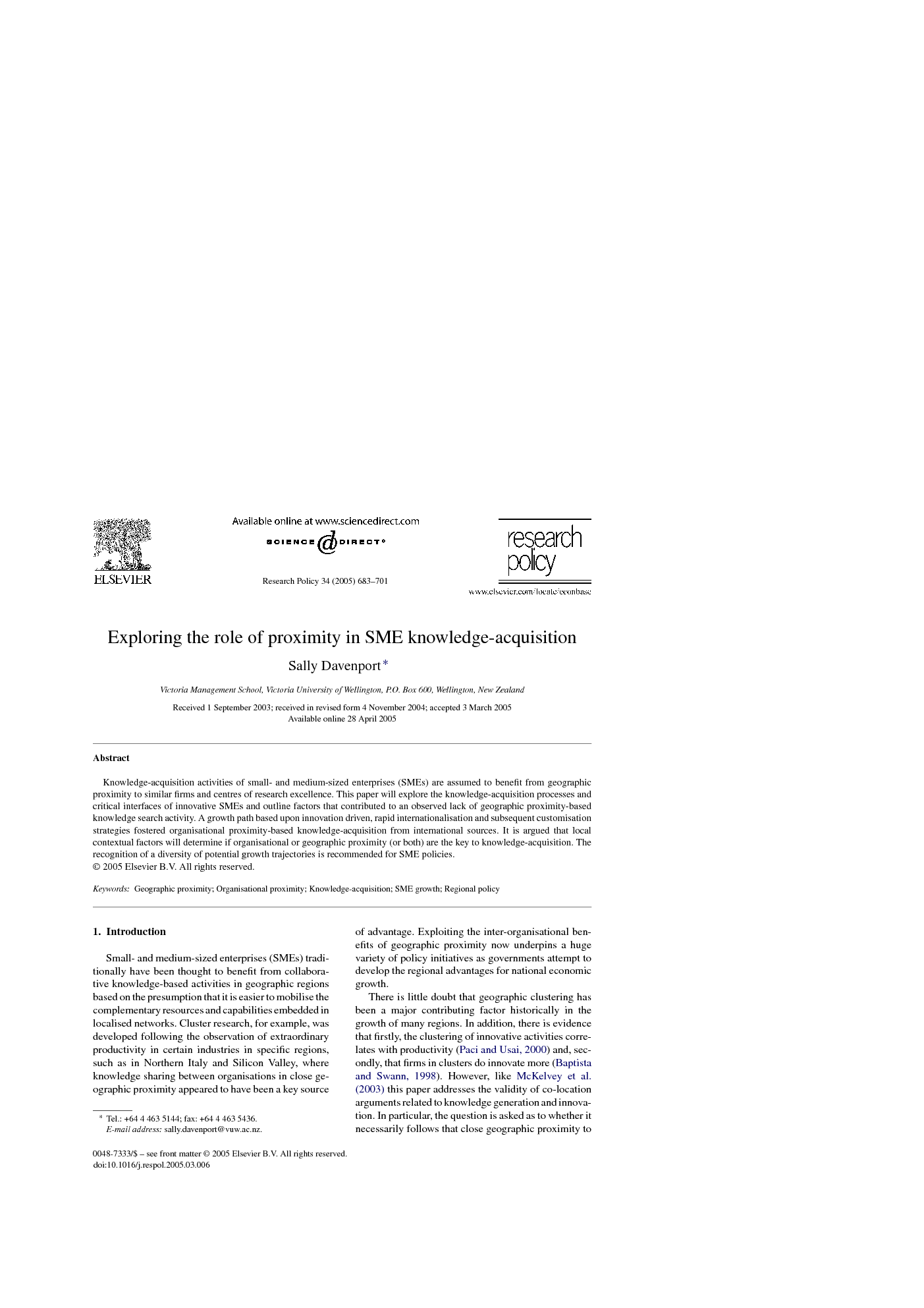 Small- and medium-sized enterprises (SMEs) traditionally have been thought to benefit from collaborative knowledge-based activities in geographic regions based on the presumption that it is easier to mobilise the complementary resources and capabilities embedded in localised networks. Cluster research, for example, was developed following the observation of extraordinary productivity in certain industries in specific regions, such as in Northern Italy and Silicon Valley, where knowledge sharing between organisations in close geographic proximity appeared to have been a key source of advantage. Exploiting the inter-organisational benefits of geographic proximity now underpins a huge variety of policy initiatives as governments attempt to develop the regional advantages for national economic growth. There is little doubt that geographic clustering has been a major contributing factor historically in the growth of many regions. In addition, there is evidence that firstly, the clustering of innovative activities correlates with productivity (Paci and Usai, 2000) and, secondly, that firms in clusters do innovate more (Baptista and Swann, 1998). However, like McKelvey et al. (2003) this paper addresses the validity of co-location arguments related to knowledge generation and innovation. In particular, the question is asked as to whether it necessarily follows that close geographic proximity to complementary knowledge and capabilities plays a part in SME innovation in all situations. If geographic proximity is not always fundamental to SME innovation, what factors might indicate the suitability of, or drive the development of, alternative knowledge-acquisition strategies? The objective of the paper is to explore the way in which a sample of innovative manufacturing and service SMEs based in New Zealand accessed the knowledge that was key (as described by the SME managers) to continued innovation. All the firms studied grew on the back of a significant innovation and most are now ‘international’ in character in that they export virtually all of their production. Although most of the firms worked with local New Zealand suppliers, very few of these were described as key knowledge sources. In order to understand better the role of proximity, the knowledge-acquisition processes will be described according to the critical interfaces employed to access and develop crucial knowledge bases. Whether these interfaces were reliant on geographic or organisational proximity provides the basis for a discussion of the impact of proximity and potential factors that might explain the observed lack of geographic proximity-based knowledge-acquisition activity. Whilst the size of the sample used in this research can only result in the development of exploratory insights into this apparently non-localised knowledge-acquisition behaviour, particularly with respect to small-firms in small countries, the paper will attempt to develop some propositions regarding SME growth and innovation, which take into account factors that might trigger a growth trajectory that does not exploit geographic proximity to knowledge sources.