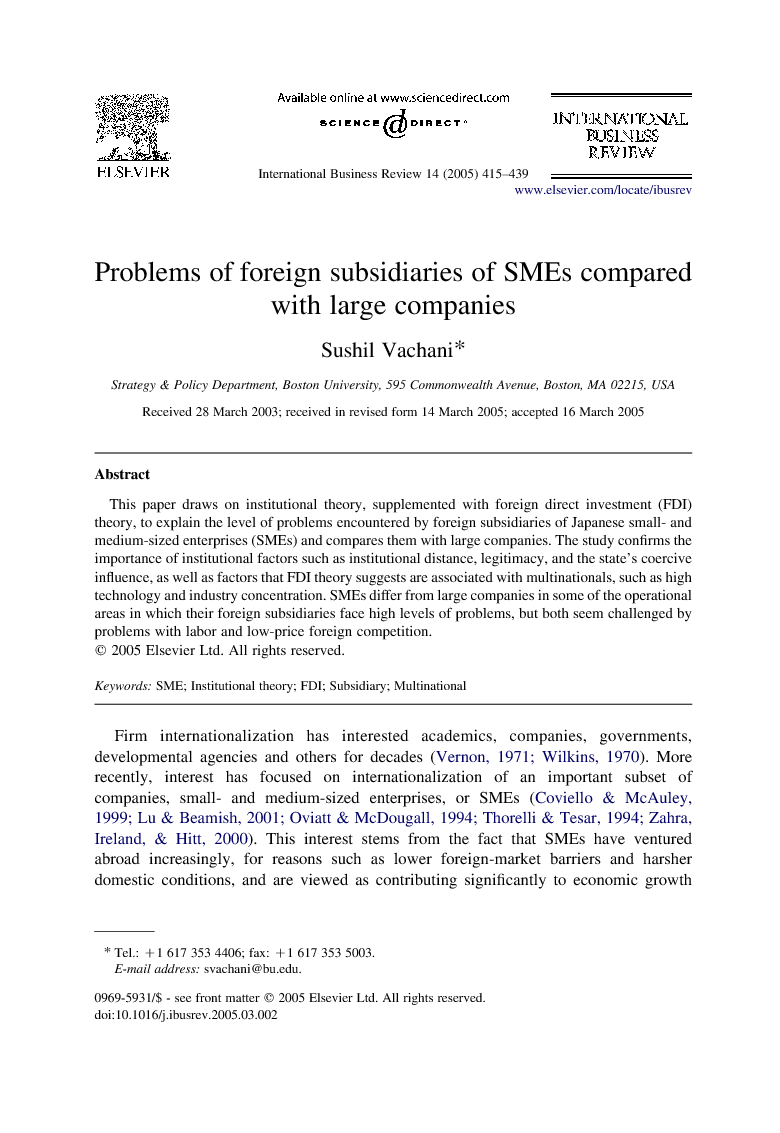 This paper draws on institutional theory, supplemented with foreign direct investment (FDI) theory, to explain the level of problems encountered by foreign subsidiaries of Japanese small- and medium-sized enterprises (SMEs) and compares them with large companies. The study confirms the importance of institutional factors such as institutional distance, legitimacy, and the state's coercive influence, as well as factors that FDI theory suggests are associated with multinationals, such as high technology and industry concentration. SMEs differ from large companies in some of the operational areas in which their foreign subsidiaries face high levels of problems, but both seem challenged by problems with labor and low-price foreign competition.

Firm internationalization has interested academics, companies, governments, developmental agencies and others for decades (Vernon, 1971 and Wilkins, 1970). More recently, interest has focused on internationalization of an important subset of companies, small- and medium-sized enterprises, or SMEs (Coviello and McAuley, 1999, Lu and Beamish, 2001, Oviatt and McDougall, 1994, Thorelli and Tesar, 1994 and Zahra et al., 2000). This interest stems from the fact that SMEs have ventured abroad increasingly, for reasons such as lower foreign-market barriers and harsher domestic conditions, and are viewed as contributing significantly to economic growth and employment (Acs et al., 1997, Chen and Martin, 2001, Japan Small Business Research Institute, 1996 and Reynolds, 1997). As SMEs invest abroad, some encounter severe problems (Vachani, 1998). The challenges faced by subsidiaries of small and large companies are not always similar since SMEs differ from large companies in important ways, such as experience with foreign environments, ability to withstand demands of host governments, and level of resources available to manage foreign operations. Hence, it is important to study the problems encountered specifically by SMEs' foreign subsidiaries. This research focuses on the problems of Japanese SMEs' subsidiaries because the rise in the yen and Japanese wages in the 1980s, and the severe recession of the 1990s (Aggarwal, 1999), have motivated Japanese SMEs to invest abroad in large numbers (Japan Small Business Research Institute, 1996 and Lu and Beamish, 2001). Research on SME internationalization falls into two streams, new ventures becoming international, and the international activities of established SMEs (McDougall & Oviatt, 2000). The first has examined the antecedents and effects of internationalization (Oviatt and McDougall, 1994 and Zahra et al., 2000). However, the link between internationalization and performance has not been adequately explored (McDougall & Oviatt, 1996). The second stream includes extensive research on export behavior and performance (Beamish et al., 1993 and Westhead et al., 2001). It also includes some research on antecedents and processes of foreign direct investment (FDI) (see Coviello & McAuley, 1999, for a review). However, research on effects of established SMEs' FDI is sparse. Lu and Beamish (2001) contend, “… more attention should be devoted to exploring whether and how value is created in the internationalization of SMEs.” Chen and Martin (2001) also stress the need to study established SMEs' FDI. Recent research has stressed the importance of the context in determining the strategies and success of multinational enterprises1 (see for example, Andersson, 2004). This research draws on Granovetter's (1985) ‘embeddedness’ perspective, recognizing that multinationals operate in complex contexts, different aspects of which can create problems for their subsidiaries' operations and affect their performance. Researchers have recommended an inter-disciplinary and multilevel approach for understanding complex organizational phenomena such as the operations of multinationals (see for example, Kostova, 1999 and Thorelli and Tesar, 1994). The theoretical model attempts to capture some of the complexity of the context in which SMEs' foreign subsidiaries are embedded, by drawing on institutional theory (North, 1990 and Scott, 2001), and supplementing it with foreign direct investment theory (Buckley and Casson, 1985, Dunning, 1988 and Hymer, 1976), to help identify factors at the country, industry and company level that help explain the problems encountered by Japanese SMEs' subsidiaries. One reason for sparse research on effect of SMEs' FDI is the unavailability of financial performance data, which limits the samples and variables researchers can use. For example, Lu and Beamish (2001) could not study the smallest Japanese SMEs because they were not listed on the Tokyo Stock Exchange. Coviello, Ghauri, and Martin (1998) suggest using other measures for studying SMEs' international competitiveness. Research indicates that SMEs investing abroad encounter severe problems that detract from value created (Tsang, 2002). So this research focuses on studying the level of problems encountered by SMEs' subsidiaries, rather than financial performance, which makes it possible to examine a broader set of companies by including companies smaller than is usually possible. Schiffer and Weder (2001) provide a valuable example of research that focuses on SMEs' problems to develop a better understanding of their operations.

This research contributes by demonstrating the relevance of Institutional and FDI theories for the operations of the smallest multinationals, for which financial performance data are usually not available and that have previously been excluded in statistical studies. It develops hypotheses about factors that explain problems encountered by SMEs' subsidiaries and tests those factors on a sample of Japanese SMEs and compares them with large companies. The study found that both theories provide significant explanatory power. However, there were some counter-intuitive findings which require drawing on the Obsolescing Bargain theory (Eden and Lenway, 2001, Vachani, 1995 and Vernon, 1971), which is not inconsistent with either institutional theory or FDI theory since it stresses the importance of the power of the state and that of certain factors (such as industry concentration) from which multinationals draw bargaining power. The study provides valuable insights relevant for development of managerial strategies and government policies to help alleviate problems encountered by SMEs' subsidiaries. Formulation of such strategies and policies must begin with an understanding of the nature of problems and this study highlights what destinations, market strategies and operational areas are associated with higher problem levels. The study underlines the importance of distinguishing between SMEs and slightly larger companies. It pinpoints specific areas in which the two types of companies face the greatest challenges. It cautions against assuming that certain strategies (e.g. export), which are viewed as beneficial for large multinationals, are trouble-free for SMEs. It underscores the problems associated with strategies based on trading, rather than manufacturing. Limitations and future research opportunities. Since Japan is unique in some respects it is difficult to generalize the findings to other countries. Replication of the study in other home countries, both developed and developing, would add value. Another limitation relates to the use of problem level as dependent variable. Future research could try and measure the effect of independent variables on financial performance. However, the smallest firms would be difficult to include in such a study owing to lack of data. Researchers could broaden the scope of the inquiry into the effect of the institutional context on SMEs. They could examine how institutional theory helps identify factors that influence the strategies of SMEs in their international ventures; for example strategies to counter challenges arising from institutional voids, or to reduce contextual uncertainty. Researchers could contribute by demonstrating how the evolution of organizational arrangements of SMEs is affected by institutional contexts. In examining the strategies used by SMEs, researchers could also focus on how they organize and manage their multinational network. Research on such questions would supplement valuable research that has been conducted by previous researchers on some of these important questions (see for example, Hills, Muzyka, Omura, & Knight, 1994). From a policy perspective it would also help to explore where SMEs seek assistance in the face of adversity. Some might seek assistance from the (home or host) government while others might rely on large Japanese trading companies (Yoshino & Lifson, 1986).