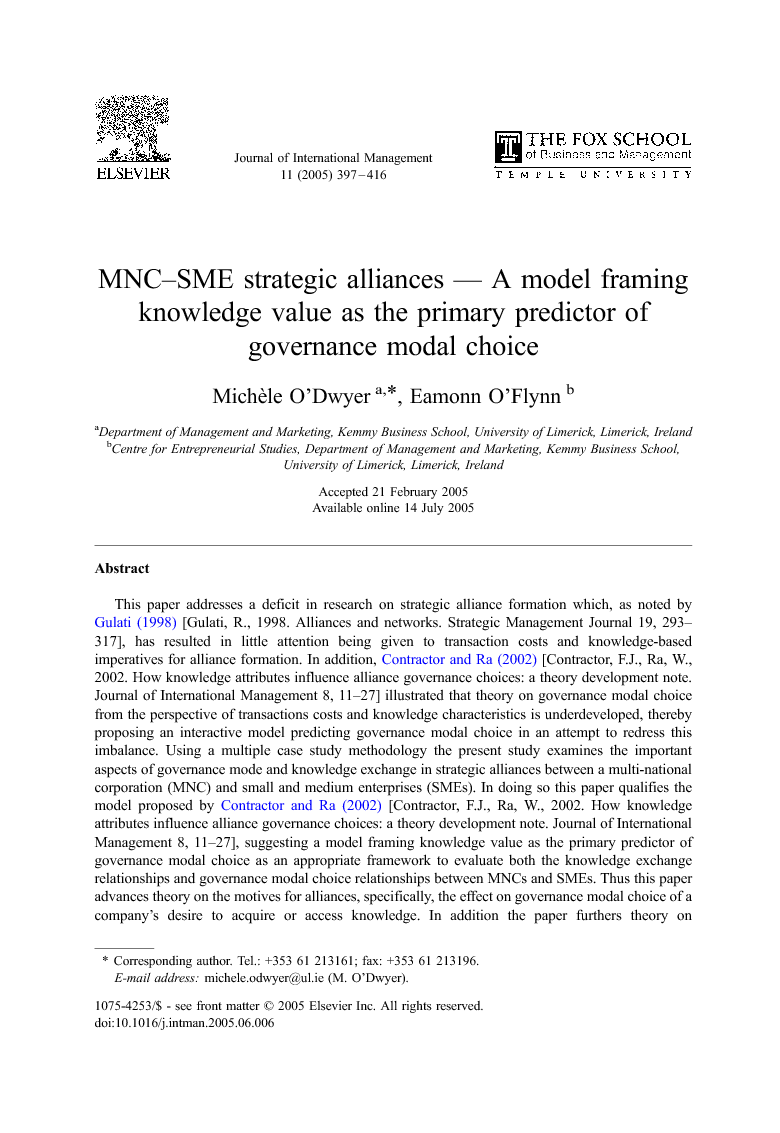 A notable characteristic of strategic alliances in the last two decades has been their increasing diversity and the associated multiplicity of formal governance structures (Gulati, 1998). In many instances governance modes imitate the control and co-ordination features associated with organisations. This is illustrated by Gulati's (1998) continuum, which positions joint ventures at one end and strategic alliances at the other. In recent years research on strategic alliance formation has concerned itself with transaction cost economics, with firm and industry level factors receiving considerable attention; however, in order to gain a comprehensive understanding of alliance formation, interacting variables such as organisational capability and knowledge exchange must be understood. Within this context, this paper examines five issues around MNC's and SME's strategic alliances; first, the strategic value of the alliance to both the MNC and SME; second, the identification of the predominant knowledge supplier; third, the motivation of both the MNC and the SME to enter strategic alliances; fourth, the learning or absorptive capacity of MNC's and SME's; and finally the knowledge appropriation concerns of partnering firms. The paper commences with a brief introduction to the topic, followed by a literature review which presents an exploration of knowledge-based influences of an SME/MNC's choice of governance mode in a strategic technology partnership, based on theory developed by Contractor and Ra (2002). The literature review continues with an overview of pertinent literature regarding appropriation concerns and alliance governance, organisational learning, knowledge transfer, and governance modes. This is followed by the research methodology, which illustrates that the selection of the case companies was based on the propensity of precision engineering companies to enter strategic alliances, and that four such SMEs identified had a common alliance partner in Molex. This presented an opportunity for a multiple case study with a generic MNC (similar to study of Nokia Mobile Phones and five of its partners conducted by Vilkamo and Keil in 2001, which was used to develop theoretical arguments regarding the choice of strategic alliance governance mode) the results of which are presented in the main findings, discussion and implications, and conclusions.

While the literature has shown that the two major variables directing the choice of governance mode are absorptive capacity (Cohen and Levinthal, 1990, Mowery et al., 1996 and Contractor and Ra, 2002) and supplier appropriation concerns (Williamson, 1985, Dyer, 1997 and Contractor and Ra, 2002) the present study illustrates that the variables are dependent on a significant number of factors. In particular, the present study found that a knowledge recipient's absorptive capacity is not determined by its ability to acquire knowledge but by its intention to acquire knowledge, which broadly agrees with the research of Tsang (1999). In other words, it is not a case of whether a knowledge recipient can copy the knowledge, but whether it wants to or not, as is exemplified by the case finding where Molex is a knowledge recipient. In addition this paper demonstrates that in general, the MNC partner in an alliance tends to have knowledge superiority both in qualitative and quantitative terms, a position that leads the MNC partner to seek the governance mode which best meets its strategic goals. However, although the governance modal choice was based on satisfying the strategic goal of the alliance as determined by the MNC's commercial needs, it should be noted that the symbiotic relationship of the MNC and SMEs is based on a complex interdependency benefiting both parties, and therefore not solely dependent on the MNC alone. The results also concur with Oxley (1997) in that the structure and content of alliances are jointly determined, and that equity joint venture as an alliance structure outperforms alternatives in supporting inter-firm learning. This can be seen particularly in the case studies involving MTS Shannon and Molex. These case studies also demonstrate that alliances between MNCs and SMEs tend to cast the smaller organisation in the role of a component supplier and whilst MNCs or closely related partners (for example companies linked to MNCs by equity joint ventures) tend to have a more sophisticated approach to their long-term development. In contrast, SMEs generally are more concerned with the short-term profitability of operations as is exemplified by the SME case studies that exhibited an absence of a coherent strategic plan for future growth. This is congruent with Gulati's (1998) finding that governance modal choice is not necessarily dominated by appropriation concerns. In specifically addressing the five issues initially raised in this paper regarding Multi-National Corporation's (MNC's) – Small and Medium Enterprise's (SME's) strategic alliances, first, the research found that the strategic value of the alliance to both the MNC and SME was significant in both instances. Second, in identifying the predominant knowledge supplier the research ascertained that the MNC dominates. Third, in assessing the motivation of both the MNC and the SME in entering strategic alliances, the MNC was found to have strategic motivations whereas SMEs had short run amicable commercial motivations. Fourth, in exploring the learning or absorptive capacity of MNCs and SMEs, the MNC demonstrated high absorptive capacity in contrast to the SMEs where absorptive capacity was found to be both predominantly low and initiated by an external force. Finally, in evaluating the knowledge appropriation concerns of partner firms, the concerns were not found to be directly related to the type of knowledge being exchanged and that other factors such as co-ordination considerations need to be addressed. In conclusion, while Contractor and Ra's (2002) model is predicated on the assumption that explicit knowledge is congruent with a high supplier appropriation concern, and vice versa for tacit knowledge, this paper illustrates that this invariant does not hold in all cases. In some alliances the exchange of tacit knowledge leads to high supplier appropriation concerns, while the exchange of explicit knowledge leads to low supplier appropriation concerns. Based on these results this paper has suggested a qualified model which accounts for the nature of the knowledge supplied, in terms of its value to the knowledge supplier, thus providing a basis for further research into the area of strategic alliance governance mode.