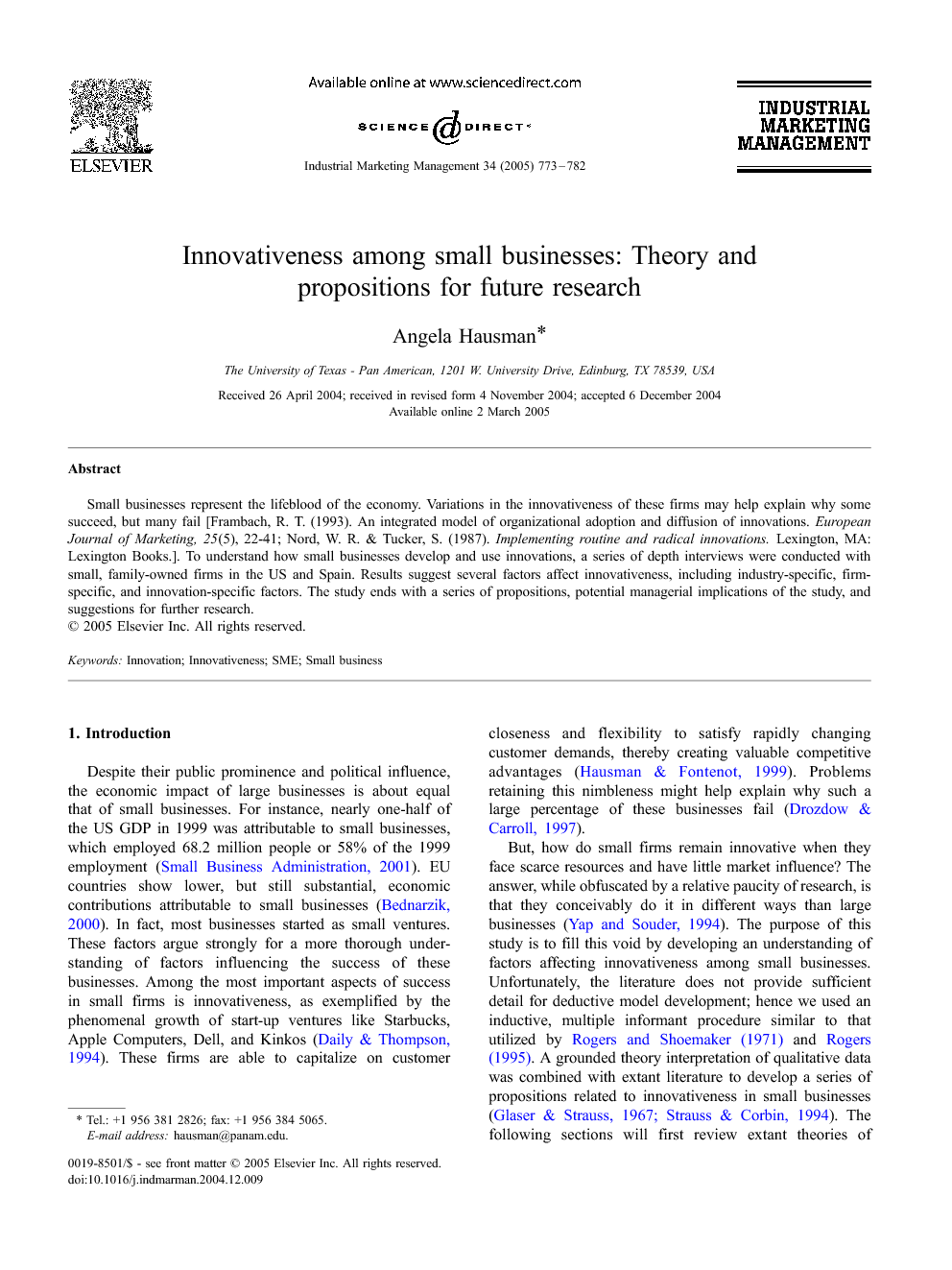 Small businesses represent the lifeblood of the economy. Variations in the innovativeness of these firms may help explain why some succeed, but many fail [Frambach, R. T. (1993). An integrated model of organizational adoption and diffusion of innovations. European Journal of Marketing, 25(5), 22-41; Nord, W. R. & Tucker, S. (1987). Implementing routine and radical innovations. Lexington, MA: Lexington Books.]. To understand how small businesses develop and use innovations, a series of depth interviews were conducted with small, family-owned firms in the US and Spain. Results suggest several factors affect innovativeness, including industry-specific, firm-specific, and innovation-specific factors. The study ends with a series of propositions, potential managerial implications of the study, and suggestions for further research.

Despite their public prominence and political influence, the economic impact of large businesses is about equal that of small businesses. For instance, nearly one-half of the US GDP in 1999 was attributable to small businesses, which employed 68.2 million people or 58% of the 1999 employment (Small Business Administration, 2001). EU countries show lower, but still substantial, economic contributions attributable to small businesses (Bednarzik, 2000). In fact, most businesses started as small ventures. These factors argue strongly for a more thorough understanding of factors influencing the success of these businesses. Among the most important aspects of success in small firms is innovativeness, as exemplified by the phenomenal growth of start-up ventures like Starbucks, Apple Computers, Dell, and Kinkos (Daily & Thompson, 1994). These firms are able to capitalize on customer closeness and flexibility to satisfy rapidly changing customer demands, thereby creating valuable competitive advantages (Hausman & Fontenot, 1999). Problems retaining this nimbleness might help explain why such a large percentage of these businesses fail (Drozdow & Carroll, 1997). But, how do small firms remain innovative when they face scarce resources and have little market influence? The answer, while obfuscated by a relative paucity of research, is that they conceivably do it in different ways than large businesses (Yap and Souder, 1994). The purpose of this study is to fill this void by developing an understanding of factors affecting innovativeness among small businesses. Unfortunately, the literature does not provide sufficient detail for deductive model development; hence we used an inductive, multiple informant procedure similar to that utilized by Rogers and Shoemaker (1971) and Rogers (1995). A grounded theory interpretation of qualitative data was combined with extant literature to develop a series of propositions related to innovativeness in small businesses (Glaser & Strauss, 1967 and Strauss & Corbin, 1994). The following sections will first review extant theories of innovativeness, then develop a series of propositions with suggestions for future research.

This study used a multi-method, multi-informant process to identify more innovative small firms. By comparing more innovative firms with less innovative ones we proposed elements affecting the degree of innovativeness in small businesses. The most important impact of the study is the fertile groundwork laid here to guide future studies. As highlighted in this study, simply applying knowledge applicable to innovativeness in large firms provides incomplete or inaccurate understandings of innovativeness in small businesses. For instance, industry competitiveness appears to function in the opposite direction in small businesses and individual characteristics of small businesses owners have an exaggerated impact on their innovativeness compared to those identified in studies of large businesses. Wholesale application of consumer innovativeness theory also appears to inaccurately reflect the situation in small businesses, since factors, such as age appear to have little impact and other factors, such as the effect of partners, have not been studied among consumers. In addition, the study takes isolated theoretical support for individual propositions and builds a cogent model to reflect innovativeness in small business reflecting the contributions of individual, market, and channel level factors as potential moderators in the process. The study questions the role of national culture in firm innovativeness. These variables appeared to have an important impact on firm adoption decisions in other studies (Gatignon, Eliashberg, & Robertson, 1989), while in this study; culture did not appear to play a significant role. By comparing firms across cultures, the study uncovers not expected differences based on culture, but a great degree of similarity across cultures. The major difference in the degree of innovativeness observed between firms in the two cultures was the effect of outside forces on adoption. However, more research is needed to identify cultural variables that impact adoption decisions, due to the limited number of firms and innovations included in this study. Questions remain regarding whether there is a cultural level of innovativeness that influences firm adoption decisions. Do culturally accepted management styles affect adoption? Do prior adoption decisions affect future decisions? Do Hofstede's cultural dimensions affect adoption decisions? A broader sample and more concrete hypotheses are necessary to effectively test the impact of culture or other salient national variables on adoption and innovativeness. The individual level propositions developed are not surprising given prior findings summarized by Rogers and Shoemaker (1971), although the impact of these variables with respect to firm adoption has never been systematically studied. From this study, it appears that some variables affecting consumer adoption also hold in small business innovativeness, due to the centralization of control of strategic decisions in the owner. Among the individual variables proposed here are education and experiences of the owners and their willingness to accept conflict. Other variables from consumer adoption do not appear to impact firm innovativeness, specifically age. Moreover, the potential impact of the competitive environment within the industry represents a new and interesting avenue for further testing, since these issues have not been studied in this context previously and the effects appear to be opposite those expected from studies of large firms. Another important area for future research is the moderating effect proposed for type of innovation. Much of the existing research on innovation has focused on product innovations, rather then ideological innovations, such as new management practices. Rogers (1995) is one of the few researchers to look more broadly at ideological innovations. This study furthers that work, proposing areas for future studies.