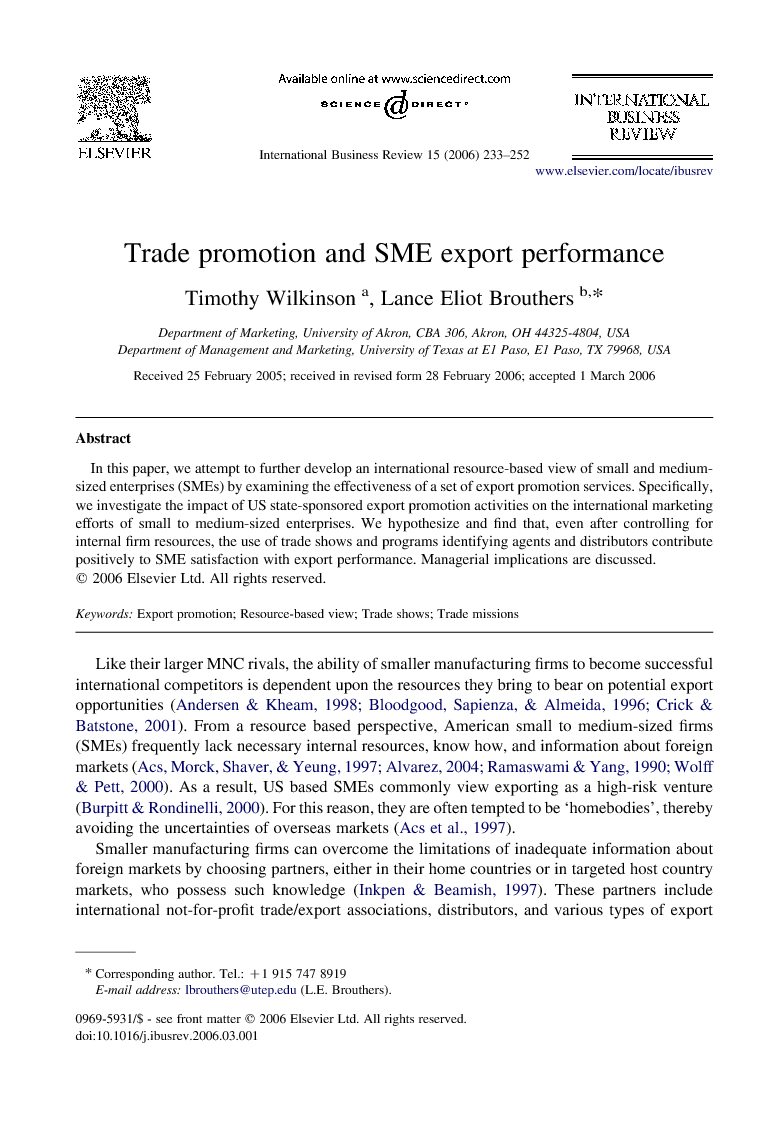 In this paper, we attempt to further develop an international resource-based view of small and medium-sized enterprises (SMEs) by examining the effectiveness of a set of export promotion services. Specifically, we investigate the impact of US state-sponsored export promotion activities on the international marketing efforts of small to medium-sized enterprises. We hypothesize and find that, even after controlling for internal firm resources, the use of trade shows and programs identifying agents and distributors contribute positively to SME satisfaction with export performance. Managerial implications are discussed.

Like their larger MNC rivals, the ability of smaller manufacturing firms to become successful international competitors is dependent upon the resources they bring to bear on potential export opportunities (Andersen and Kheam, 1998, Bloodgood et al., 1996 and Crick et al., 2001). From a resource based perspective, American small to medium-sized firms (SMEs) frequently lack necessary internal resources, know how, and information about foreign markets (Acs et al., 1997, Alvarez, 2004, Ramaswami and Yang, 1990 and Wolff and Pett, 2000). As a result, US based SMEs commonly view exporting as a high-risk venture (Burpitt & Rondinelli, 2000). For this reason, they are often tempted to be ‘homebodies’, thereby avoiding the uncertainties of overseas markets (Acs et al., 1997). Smaller manufacturing firms can overcome the limitations of inadequate information about foreign markets by choosing partners, either in their home countries or in targeted host country markets, who possess such knowledge (Inkpen & Beamish, 1997). These partners include international not-for-profit trade/export associations, distributors, and various types of export intermediaries. In addition, they may access the services of governments, an often aggressive player in the field of export promotion. In the US, government promotional activities are largely sponsored by individual states. The economic justification for this activity is the inability of many American SMEs to successfully export their products into overseas markets. This inability may be viewed as a condition of market failure, thereby providing an economic justification for government involvement in export promotion (Singer, 1990). State policymakers encourage small to medium-sized manufacturers to sell overseas as a means of achieving increased employment, expanded tax bases, and consistent capital formation (Eisinger, 1988). Government officials have become adept at using a wide array of marketing tools to directly assist SMEs. These tools range from computerized trade lead-matching programs to trade missions and trade shows. Such activities can be used to complement the internal resources and capabilities of SMEs by providing what is, essentially, a subsidization of international marketing efforts.1 Lages and Montgomery (2001) point out that much of the research on export promotion is of little relevance to policymakers and mangers because it focuses on tangential issues (i.e. program awareness) rather than on specific promotion activities. The present study fills a gap in the literature by analyzing the impact of programs (trade missions, trade shows, and the identification of agents and distributors) sponsored by state government EPOs on the export performance of firms. While previous research has examined trade shows and trade missions, the context has been (1) aggregate levels of state or national exports (e.g. Coughlin & Cartwright, 1987), or (2) firm level export performance as influenced by the private sector or by national governments. In contrast, we analyze the effectiveness of state-sponsored export promotion activities using the firm as the unit of analysis. In addition, no previous study has examined the impact of state-sponsored programs identifying agents and distributors at the firm level. The paper proceeds as follows: first, past studies on export promotion are discussed. Second, the literature on export barriers is summarized. A theory section follows in which it is hypothesized that both specified internal firm resources and export promotion programs are positively associated with export performance. Finally, implications for policy makers and managers are discussed.

This paper has several limitations. First, it is cross-sectional in design. While time-series data is desirable when examining a dynamic process such as exporting, such data simply does not exist. Neither firms nor governmental entities keep records according to the dictates of academic researchers. Second, the sample came from a single state. While we believe that this sample is representative, the only realistic corrective to this limitation is a replication conducted with data from other states. Third, the survey used a reflexive instrument to measure export performance. Although this is the most common approach used in marketing studies, it has been challenged as potentially unreliable in terms of internal consistency and construct-validity (Bagozzi, 1994 and Diamantopoulos, 1999). In this paper, the scores of the four dependent items were summed up thereby transforming the reflective instrument into a formative instrument. Reflective instruments should be used with structural equation modeling in order to preserve their psychometric properties. In future studies, researchers may wish to employ alternative approaches to measurement and analysis. Fourth, Katsikeas et al. (2000) have criticized the performance measures used in export studies as problematic in terms of difficulties measuring, conceptualizing, and operationalizing the export performance construct. It is hoped that researchers will eventually produce a readily agreed upon set of performance indicators. Fifth, although similar to previous studies, a response rate of 14% is low. Surveys of SMEs tend to have lower response rates than those of large firms. Fewer slack resources and the concentration of firm knowledge in CEOs (who tend to be too busy to fill out surveys and who may not delegate the task as readily as a CEO of a big firm), lead to lower response rates for smaller companies (Bartholomew & Smith, 2006). Lower response rates are problematic because, ‘low response rate can lead to serious bias (non-response bias) because whether a person responds to a mail survey is related to his or her interest in the topic’ (Malhotra, 1996, p. 210). Finally, we analyzed a limited number of export promotion activities. Others doubtless need to be considered, such as the influence of trade associations and world trade centers. Moreover, the analysis did not control for the possibility that some firms participated in independently sponsored trade shows and non-government supported international venture assistance. Future research could examine the role of other resources that firms might access in host countries. While a great deal of literature has focused on strategic alliances, little has been written about other capabilities that might be tapped into, including, host country governments, networks accessed through formal and informal associations, and state operated foreign trade offices. Based on our hypotheses and results we recommend that SMEs consider using effective export promotion programs as a means of supplementing their firm specific resources. In an intensively competitive world the ability to access resources external to the firm represents one way that smaller businesses can increase sales, expand into new markets, locate new partners, and create competitive advantage. Locating and examining the usefulness of other resources external to the firm could be productive for future research and may prove beneficial to smaller exporting firms. Such research endeavors eventually may result in a model that contributes both to academic knowledge and provides guidance for small firms in determining how to create greater export success.