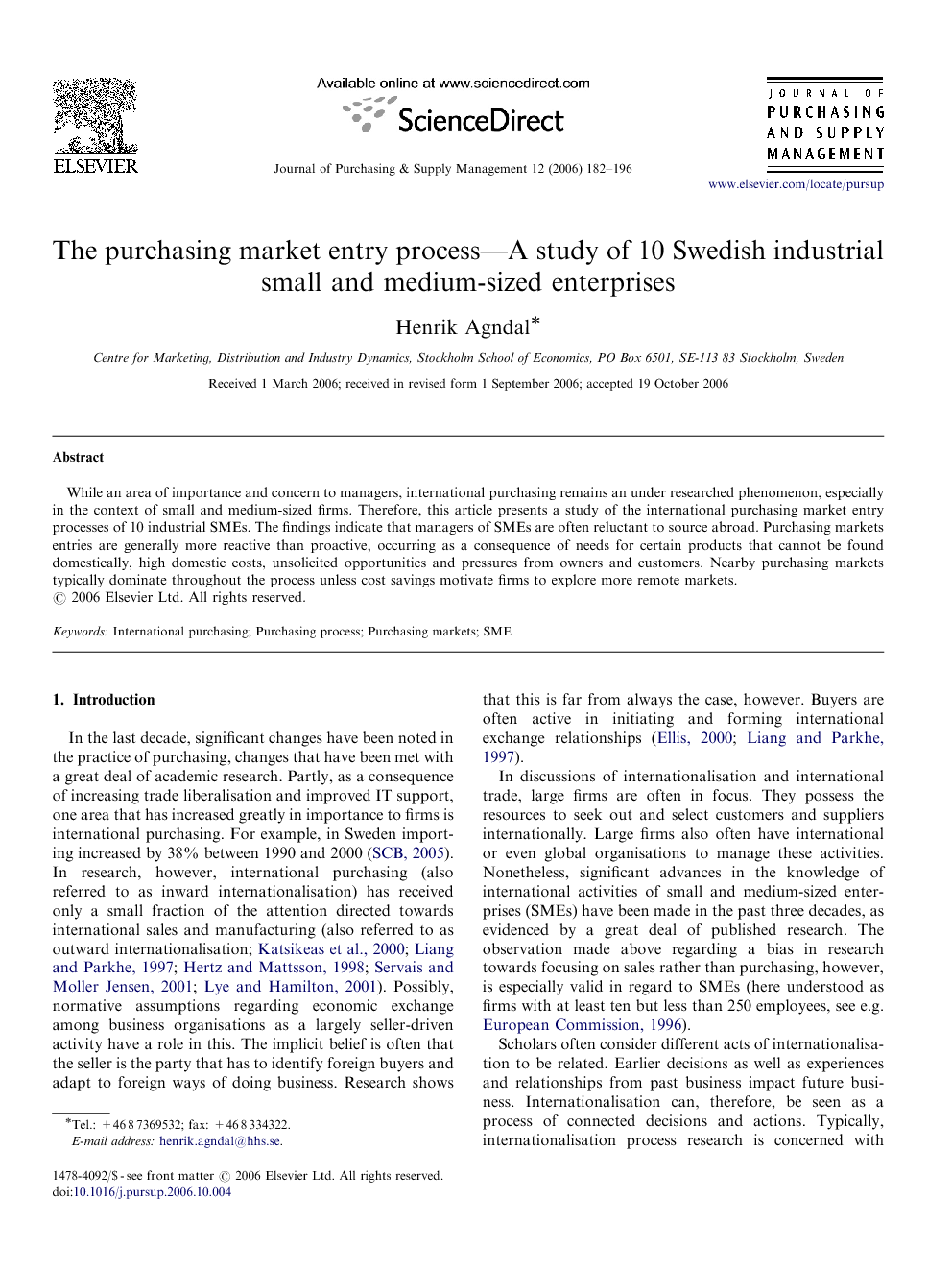 While an area of importance and concern to managers, international purchasing remains an under researched phenomenon, especially in the context of small and medium-sized firms. Therefore, this article presents a study of the international purchasing market entry processes of 10 industrial SMEs. The findings indicate that managers of SMEs are often reluctant to source abroad. Purchasing markets entries are generally more reactive than proactive, occurring as a consequence of needs for certain products that cannot be found domestically, high domestic costs, unsolicited opportunities and pressures from owners and customers. Nearby purchasing markets typically dominate throughout the process unless cost savings motivate firms to explore more remote markets.

In the last decade, significant changes have been noted in the practice of purchasing, changes that have been met with a great deal of academic research. Partly, as a consequence of increasing trade liberalisation and improved IT support, one area that has increased greatly in importance to firms is international purchasing. For example, in Sweden importing increased by 38% between 1990 and 2000 (SCB, 2005). In research, however, international purchasing (also referred to as inward internationalisation) has received only a small fraction of the attention directed towards international sales and manufacturing (also referred to as outward internationalisation; Katsikeas et al., 2000; Liang and Parkhe, 1997; Hertz and Mattsson, 1998; Servais and Moller Jensen, 2001; Lye and Hamilton, 2001). Possibly, normative assumptions regarding economic exchange among business organisations as a largely seller-driven activity have a role in this. The implicit belief is often that the seller is the party that has to identify foreign buyers and adapt to foreign ways of doing business. Research shows that this is far from always the case, however. Buyers are often active in initiating and forming international exchange relationships (Ellis, 2000; Liang and Parkhe, 1997). In discussions of internationalisation and international trade, large firms are often in focus. They possess the resources to seek out and select customers and suppliers internationally. Large firms also often have international or even global organisations to manage these activities. Nonetheless, significant advances in the knowledge of international activities of small and medium-sized enterprises (SMEs) have been made in the past three decades, as evidenced by a great deal of published research. The observation made above regarding a bias in research towards focusing on sales rather than purchasing, however, is especially valid in regard to SMEs (here understood as firms with at least ten but less than 250 employees, see e.g. European Commission, 1996). Scholars often consider different acts of internationalisation to be related. Earlier decisions as well as experiences and relationships from past business impact future business. Internationalisation can, therefore, be seen as a process of connected decisions and actions. Typically, internationalisation process research is concerned with trying to establish patterns in which markets are entered over time and how they are entered. It also focuses on finding explanations for these patterns (Bjorkman and Kock, 1997). Internationalisation process research is relatively plentiful, although less so in the case of SMEs (Coviello and McAuley, 1999). Common to nearly all this research, though, is that it focuses on international sales or international manufacturing. Although observations have been made to the effect that SMEs are increasingly becoming involved in diverse international activities (Apfelthaler, 2000; Julien, 1996), little is known about SMEs’ international purchasing processes (Zeng, 2003). Nonetheless, some insights about SMEs’ international purchasing have been made, typically without focusing on processes. Mainly, extant research stresses motives for, problems in, and extent of international purchasing, often with a focus on North American firms (Servais and Moller Jensen, 2001). For example, Deng and Wortzel (1995) studied US importers (although not just SMEs), concluding that geographic location of suppliers mattered little. Rather, price, quality and promptness of delivery were highly rated criteria. There are also some European studies. In a Survey of 139 small Danish importing manufacturers, it was found that international purchasing was widespread, although largely limited to nearby countries (Servais and Moller Jensen, 2001). Absence of local alternatives prompted firms to buy internationally and it was found that the buying firms were much less likely than in domestic purchasing to be approach by the seller. Along the same lines, in a multiple-case study Quintens et al. (2005) found that smaller firms often preferred indirect international purchasing, and were generally reactive. Like Servais and Moller Jensen (2001), Quintens et al. (2005) also found that SMEs primarily bought from foreign suppliers when there were no domestic alternatives. Similarly, in a study comparing purchasing activities of large and small US firms, Scully and Fawcett (1994) found that small firms’ foreign purchasing was more likely to be reactive and unplanned. They found that the decision to source internationally was largely a response to a specific opportunity that presented itself or was taken as a specific need arose inside the firm. Such studies, thus, provide some insights into managerial thinking and practices regarding international purchasing. Extant studies, however, do not generally focus on how international purchasing processes form over time, clearly a poorly developed research area (Zeng, 2003; Quintens et al., 2005), especially where the process of establishing purchasing relationships and entering international purchasing markets is concerned (Zeng, 2003; Matthyssens et al., 2003). In fact, in the research conducted for this article not a single published article specifically on international purchasing market entry processes of SMEs—i.e. the process of SMEs becoming involved in purchasing on new markets over time—has been encountered. The purpose of this article is to address that gap. More specifically, it aims to explore if patterns in purchasing market entries over time can be identified and, if so, how these patterns can be explained. Below, insights from outward internationalisation research are discussed as a guide for this study. The subsequent section outlines a research project aimed at investigating the international purchasing market entry process of SMEs, followed by a presentation and discussion of some findings from this project. The final section of the article presents conclusions and discusses some implications and limitations.