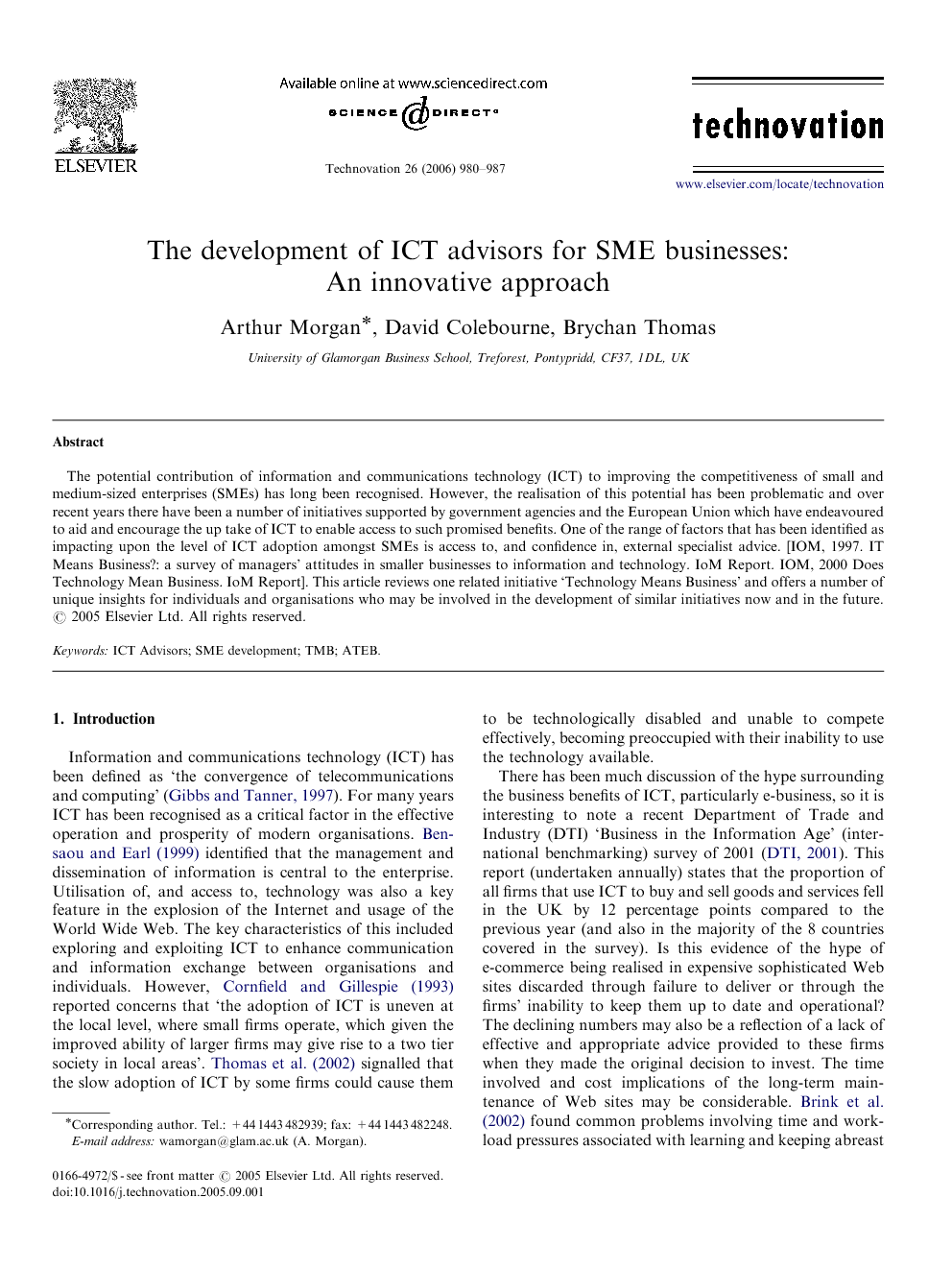 The potential contribution of information and communications technology (ICT) to improving the competitiveness of small and medium-sized enterprises (SMEs) has long been recognised. However, the realisation of this potential has been problematic and over recent years there have been a number of initiatives supported by government agencies and the European Union which have endeavoured to aid and encourage the up take of ICT to enable access to such promised benefits. One of the range of factors that has been identified as impacting upon the level of ICT adoption amongst SMEs is access to, and confidence in, external specialist advice. [IOM, 1997. IT Means Business?: a survey of managers’ attitudes in smaller businesses to information and technology. IoM Report. IOM, 2000 Does Technology Mean Business. IoM Report]. This article reviews one related initiative ‘Technology Means Business’ and offers a number of unique insights for individuals and organisations who may be involved in the development of similar initiatives now and in the future.

Information and communications technology (ICT) has been defined as ‘the convergence of telecommunications and computing’ (Gibbs and Tanner, 1997). For many years ICT has been recognised as a critical factor in the effective operation and prosperity of modern organisations. Bensaou and Earl (1999) identified that the management and dissemination of information is central to the enterprise. Utilisation of, and access to, technology was also a key feature in the explosion of the Internet and usage of the World Wide Web. The key characteristics of this included exploring and exploiting ICT to enhance communication and information exchange between organisations and individuals. However, Cornfield and Gillespie (1993) reported concerns that ‘the adoption of ICT is uneven at the local level, where small firms operate, which given the improved ability of larger firms may give rise to a two tier society in local areas’. Thomas et al. (2002) signalled that the slow adoption of ICT by some firms could cause them to be technologically disabled and unable to compete effectively, becoming preoccupied with their inability to use the technology available. There has been much discussion of the hype surrounding the business benefits of ICT, particularly e-business, so it is interesting to note a recent Department of Trade and Industry (DTI) ‘Business in the Information Age’ (international benchmarking) survey of 2001 (DTI, 2001). This report (undertaken annually) states that the proportion of all firms that use ICT to buy and sell goods and services fell in the UK by 12 percentage points compared to the previous year (and also in the majority of the 8 countries covered in the survey). Is this evidence of the hype of e-commerce being realised in expensive sophisticated Web sites discarded through failure to deliver or through the firms’ inability to keep them up to date and operational? The declining numbers may also be a reflection of a lack of effective and appropriate advice provided to these firms when they made the original decision to invest. The time involved and cost implications of the long-term maintenance of Web sites may be considerable. Brink et al. (2002) found common problems involving time and workload pressures associated with learning and keeping abreast of technology developments for improving productivity and for ensuring the company maintains a competitive edge in the marketplace in SMEs. Following a number of reviews, (for example Graham and Dominy, 1991), it was recognised that for whole economies to flourish, the smaller companies (SMEs), which make up the vast proportion of all businesses in the UK (over 99% in Wales, WDA, 2001), also needed to embrace information technology and the benefits it can bring. In addition the current government has placed great emphasis on the adoption of ICT across all sectors of society and the economy (one government target is to ‘ensure that 1.5 million micro, small and medium-sized businesses are on-line by 2002’), and has recognised the potential for ICT to contribute to the growth and competitive gains of SMEs (Southern and Tilles, 2000). A perception that in peripheral regional areas existing ICT infrastructures were inadequate and usage by SMEs was low was reported by Gibbs and Tanner (1997). They claim this has led to interventionist strategies resulting in fragmented adhoc approaches to implementation. In the same study on local development policies the regional leader in ICT initiatives was identified as Wales (53.8% of respondents had a current ICT initiative). This appears to be due to substantial tele-cottage developments related to funding provided through the WDA particularly, although not wholly dependent, on European Union funding. Part of the problem for SMEs with take up and effective usage was ‘cost of equipment and lack of suitable expertise with which to exploit it’. Thomas et al. (2002) confirmed that technical changes have resulted in impressive increases in productivity (particularly) in ICT manufacturing which, together with falling costs, facilitate rapid diffusion of ICT as a pervasive technology. In order to clarify the role which ICT is able to play for SME development, Miles and Thomas (1990) sub-divided ICT services into three types: (i) information, (ii) communication, and (iii) transactional, to which Thomas and Sparkes (2000) added a fourth type, relational. The benefits that the facilitation and support provided by independent ICT advisers to access the potential of these in a co-ordinated and business-focused manner are enormous, particularly, given the limited time and resources which the SME is able to bring to bear on the issue. This paper considers the management of an innovative government and private sector supported initiative led by the Institute of Management—Technology Means Business (TMB)—which has been stimulated directly by the recognition of the needs of SMEs (particularly smaller firms) for appropriate and high-quality business ICT advice. By developing and confirming the capabilities of the providers of such advice, TMB aimed to contribute to the increased uptake and usage of ICT within UK business. The research question posed in this paper is as follows “Is the TMB accreditation programme an important development and does the model of development adopted address the real development needs of ICT advisers in SME businesses?” The paper describes the TMB initiative and the development of a model of supported development designed for ICT advisors in SME businesses. In particular three aspects are highlighted: • The operation and structure of the initiative • The success of the initiative from a participant's perspective • The introduction of a blended learning model to support and continue development of the programme.

Establishing a system that ensures as far as possible the individuals within whom the responsibility for supporting such development has been vested are competent offers considerable advantages. Both the development process, which this particular form of advisory service to SMEs offers, as well as the opportunity to adopt a quality standard for advisers in which SMEs may have confidence are clear. The programme makes no claim to the benefits which investing in ICT may bring, and there exists little empirical evidence that is able to demonstrate this. Instead, it points out that if an SME is intending to invest in ICT then they would be well advised to seek out an adviser who is also accredited in order to ensure the investment has a clear strategic focus and the business opportunity is enhanced. Involvement in a such process may also encourage a different type of approach within SMEs towards adopting better informed approaches to their business generally. The development of a more systematic approach that involved a review of the business process and strategy could offer a clearer picture where appropriate and related investment might produce the best results which may include a decision not to invest in ICT. Taken on its own it is fair to say there already exists a wide range of these types of support. The point is if the need for investment in ICT has been correctly identified then the intervention of an advisor skilled in its implementation might consequently be more valuable and valued thereby creating its own demand.