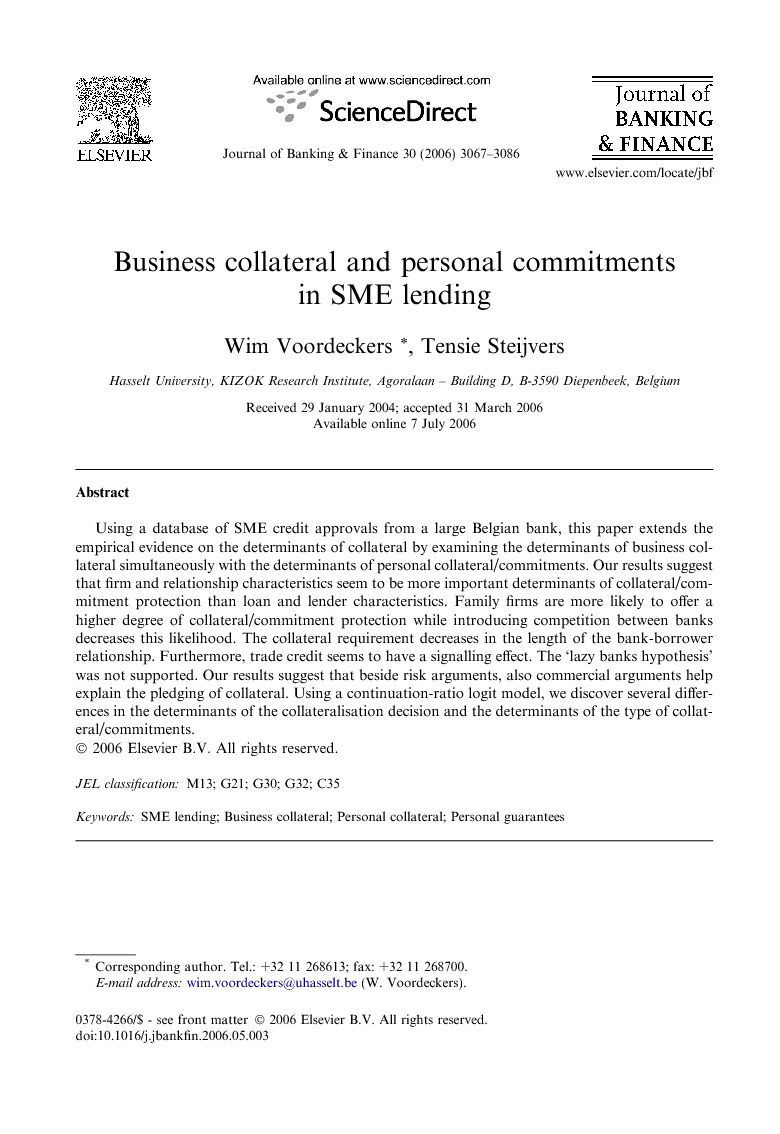 The determinants of collateral have intrigued scholars for decades. Although in reality many SMEs have to pledge personal collateral/commitments, there is barely empirical evidence available about the determinants of these personal collateral/commitments. As far as our knowledge, we are the first that empirically investigate the determinants of personal collateral/commitments simultaneously with the determinants of business collateral for SMEs in a bank-oriented economy. Moreover, we provide empirical evidence about the differences in determinants of the collateralisation choice and the type of collateral decision. Our results suggest that firm and relationship characteristics seem to be more important determinants of collateral/commitment protection than loan and lender characteristics. The results indicate that family firms are more likely to offer a higher degree of collateral/commitment protection while introducing competition between banks decreases this likelihood. Trade credit is negatively related to the degree of collateral/commitment protection, indicative of a possible signalling effect of trade credit. In line with previous studies, we find indications that collateral requirements decrease in the length of the bank-borrower relationship. Furthermore, when a firm introduces more competition between banks for a credit request, it decreases the likelihood of having to offer collateral or in case of collateral pledging, to offer personal commitments. Our results also suggest that beside risk arguments, also commercial arguments determine the pledging of collateral. If a financial institution operates as ‘main bank’ for a firm, this firm is also more likely to offer collateral/commitments. A theoretical explanation for this behaviour is provided by Mann, 1997a and Mann, 1997b. Banks often take collateral because secured credit limits the firms ability to obtain future loans from other lenders and reduces the risk of excessive future borrowing. We add to this a more pragmatic explanation. Formalized interviews with the account managers revealed that banks in Belgium usually act in this way because of commercial reasons. Collateral creates a barrier-to-entry for other competing banks if these banks try to capture the client-firm from the main bank. Lines of credit are more likely to be granted with a higher degree of collateral/commitment protection than other loans. The provocative ‘lazy banks’ proposition of Manove et al. (2001) is not supported by our results: the pledging of collateral does not seem to be a substitute for the screening efforts of the bank as measured by the time needed to approve the credit request. Using a continuation-ratio logit model, we discovered several differences in determinants of the collateralisation decision and determinants of the type of collateral/commitments. The signalling effect of trade credit and the amount of the loan are only significant in the type of collateral choice model while the main banker, lines of credit and the maturity of the loan show only significant effects in the collateralisation decision. Generally, our models seem to explain better the collateralisation decision than the type of collateral decision. One may question if a banking policy of taking more collateral than necessary from a point of view of risk such as suggested by our results, may lead to the phenomenon of ‘discouraged borrowers’ which has been discussed recently in the academic literature (Levenson and Willard, 2000 and Kon and Storey, 2003). Previous research (Binks and Ennew, 1995) indicates that the lenders’ demand for personal commitments augments the perceived credit constraints in SMEs. Future research should scrutinize the correlation between banking policy and the phenomenon of discouraged borrowers and demand side-credit rationing. A possible positive relation would shed a different light on the credit rationing debate. Finally, several issues remain unexplored. We measure collateral protection as an ordinal variable and with dummy variables. Although the majority of current and past empirical studies measure the dependent variable in a similar way, an important dimension of the problem remains unexplored being the amount of collateral/commitments a bank requires. Future research should implement the amount of business collateral and personal commitments as a dependent variable in order to test the robustness of current findings.