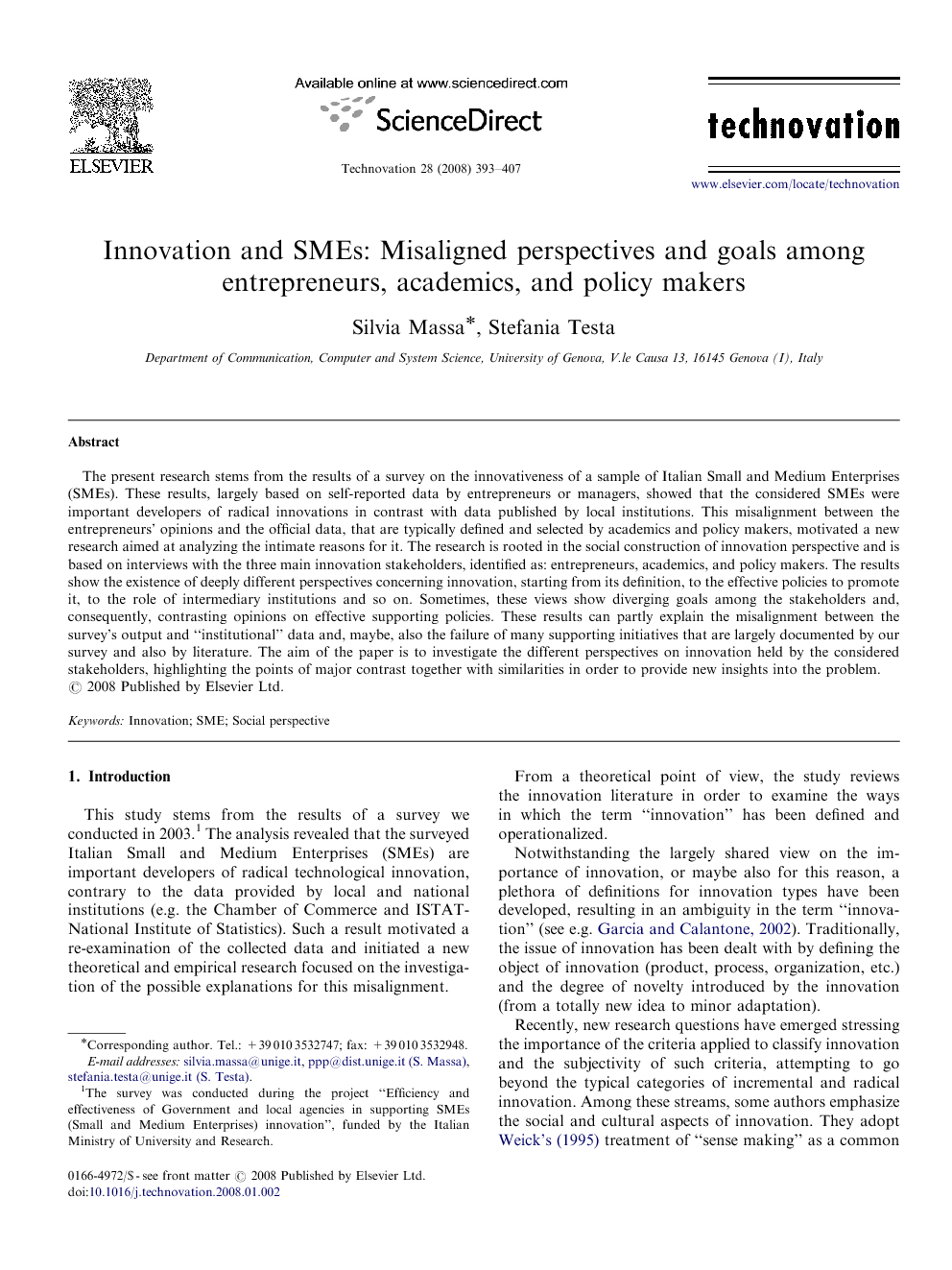 The present research stems from the results of a survey on the innovativeness of a sample of Italian Small and Medium Enterprises (SMEs). These results, largely based on self-reported data by entrepreneurs or managers, showed that the considered SMEs were important developers of radical innovations in contrast with data published by local institutions. This misalignment between the entrepreneurs’ opinions and the official data, that are typically defined and selected by academics and policy makers, motivated a new research aimed at analyzing the intimate reasons for it. The research is rooted in the social construction of innovation perspective and is based on interviews with the three main innovation stakeholders, identified as: entrepreneurs, academics, and policy makers. The results show the existence of deeply different perspectives concerning innovation, starting from its definition, to the effective policies to promote it, to the role of intermediary institutions and so on. Sometimes, these views show diverging goals among the stakeholders and, consequently, contrasting opinions on effective supporting policies. These results can partly explain the misalignment between the survey's output and “institutional” data and, maybe, also the failure of many supporting initiatives that are largely documented by our survey and also by literature. The aim of the paper is to investigate the different perspectives on innovation held by the considered stakeholders, highlighting the points of major contrast together with similarities in order to provide new insights into the problem.

This study stems from the results of a survey we conducted in 2003.1 The analysis revealed that the surveyed Italian Small and Medium Enterprises (SMEs) are important developers of radical technological innovation, contrary to the data provided by local and national institutions (e.g. the Chamber of Commerce and ISTAT-National Institute of Statistics). Such a result motivated a re-examination of the collected data and initiated a new theoretical and empirical research focused on the investigation of the possible explanations for this misalignment. From a theoretical point of view, the study reviews the innovation literature in order to examine the ways in which the term “innovation” has been defined and operationalized. Notwithstanding the largely shared view on the importance of innovation, or maybe also for this reason, a plethora of definitions for innovation types have been developed, resulting in an ambiguity in the term “innovation” (see e.g. Garcia and Calantone, 2002). Traditionally, the issue of innovation has been dealt with by defining the object of innovation (product, process, organization, etc.) and the degree of novelty introduced by the innovation (from a totally new idea to minor adaptation). Recently, new research questions have emerged stressing the importance of the criteria applied to classify innovation and the subjectivity of such criteria, attempting to go beyond the typical categories of incremental and radical innovation. Among these streams, some authors emphasize the social and cultural aspects of innovation. They adopt Weick's (1995) treatment of “sense making” as a common social constructionist framework for interpreting data: “what the situation means is defined by who I become while dealing with it or what and who I represent” (Weick, 1995). The idea that the source of innovation perception is social is deeply rooted in the social construction of innovation (Burns and Stalker, 1961; Zaltman et al., 1973). Avoiding the problem of perception is neither feasible nor desirable. In fact, a broad stream of literature on entrepreneurship/SMEs agrees in recognizing the impact of entrepreneurs’ perceptions on their behaviors and on firm performances (see e.g. Cooper et al., 1988; Stewart and Roth, 2001; Stewart et al., 2003; Lerner and Tamar, 2002; Smith-Doerr et al., 2004). The survey's empirical evidences that contrast with “institutional” data, together with the themes emerging from the literature review, gave light to new research questions. These new questions regard the different perspectives existing on innovation among the several social groups dealing with it and the possible/impossible ways of reconciling them in order to be effective in establishing innovation policies and programs. From an empirical point of view, a new qualitative research, rooted in the social construction of innovation, has been developed. Interviews with people involved in the innovation process have been conducted in order to identify similarities and differences in their perspectives. Delving into details of the different perspectives on innovation is not a mere academic game. In fact, as it will be underlined in the theoretical section, perspectives deeply influence behaviors, in terms of innovation policy making and innovation practices inside companies and universities. The paper is organized as follows. First, the concept of innovation, as it has been treated in literature, is explored and a brief review of the definitions, indicators and methodologies is provided. Second, literature about innovation in SMEs is briefly reviewed in order to extract the most common research questions investigated in the field. Third, the empirical background of the research is described: some details on the first survey are provided and the new research questions are defined. Fourth, the empirical research is introduced, giving details on data collection and analysis. Fifth, the results are discussed in order to answer the proposed research questions. Finally, some conclusions are provided.