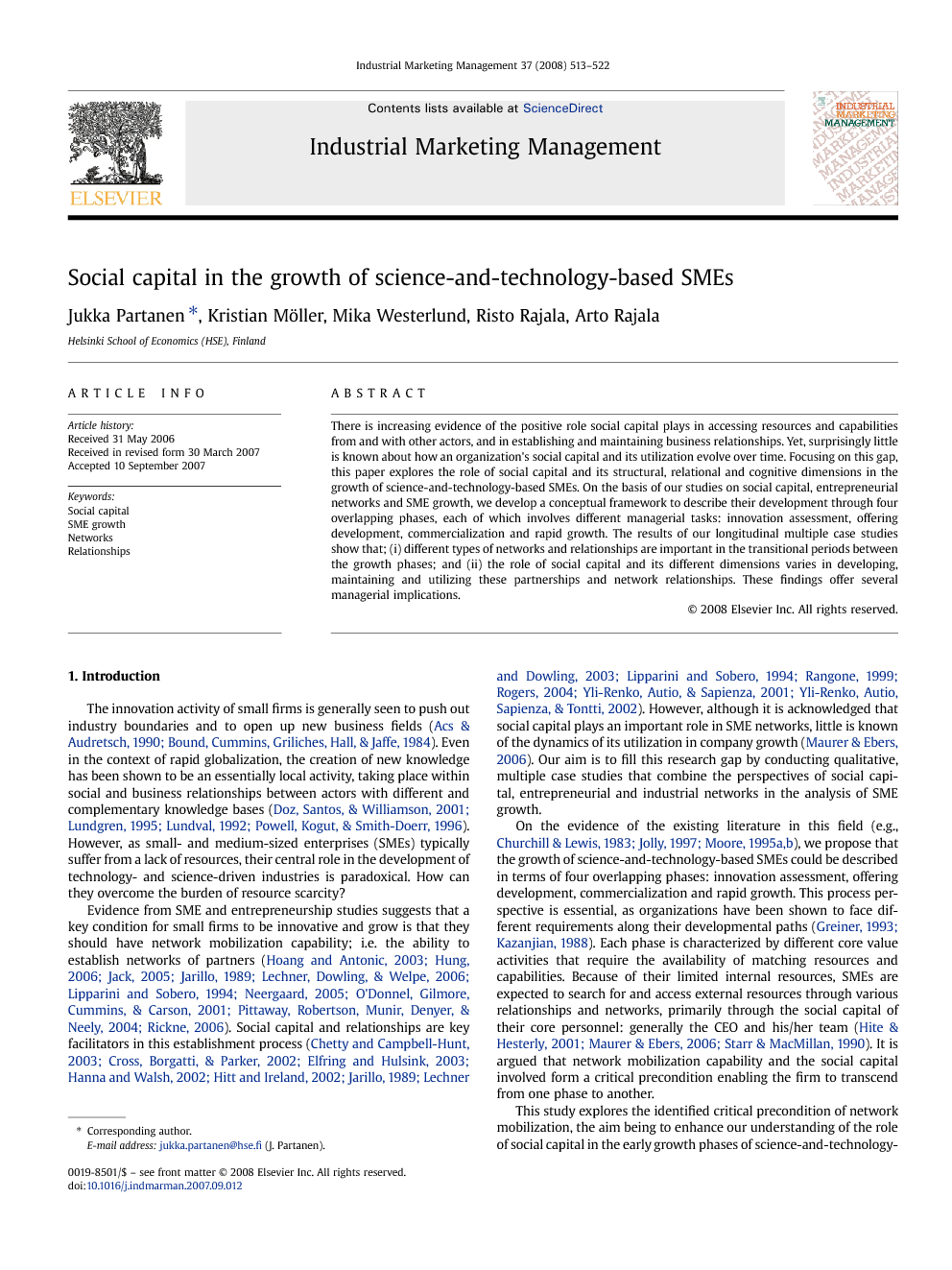 There is increasing evidence of the positive role social capital plays in accessing resources and capabilities from and with other actors, and in establishing and maintaining business relationships. Yet, surprisingly little is known about how an organization's social capital and its utilization evolve over time. Focusing on this gap, this paper explores the role of social capital and its structural, relational and cognitive dimensions in the growth of science-and-technology-based SMEs. On the basis of our studies on social capital, entrepreneurial networks and SME growth, we develop a conceptual framework to describe their development through four overlapping phases, each of which involves different managerial tasks: innovation assessment, offering development, commercialization and rapid growth. The results of our longitudinal multiple case studies show that; (i) different types of networks and relationships are important in the transitional periods between the growth phases; and (ii) the role of social capital and its different dimensions varies in developing, maintaining and utilizing these partnerships and network relationships. These findings offer several managerial implications.

The innovation activity of small firms is generally seen to push out industry boundaries and to open up new business fields (Acs and Audretsch, 1990 and Bound et al., 1984). Even in the context of rapid globalization, the creation of new knowledge has been shown to be an essentially local activity, taking place within social and business relationships between actors with different and complementary knowledge bases (Doz et al., 2001, Lundgren, 1995, Lundval, 1992 and Powell et al., 1996). However, as small- and medium-sized enterprises (SMEs) typically suffer from a lack of resources, their central role in the development of technology- and science-driven industries is paradoxical. How can they overcome the burden of resource scarcity? Evidence from SME and entrepreneurship studies suggests that a key condition for small firms to be innovative and grow is that they should have network mobilization capability; i.e. the ability to establish networks of partners (Hoang and Antonic, 2003, Hung, 2006, Jack, 2005, Jarillo, 1989, Lechner et al., 2006, Lipparini and Sobero, 1994, Neergaard, 2005, O'Donnel et al., 2001, Pittaway et al., 2004 and Rickne, 2006). Social capital and relationships are key facilitators in this establishment process (Chetty and Campbell-Hunt, 2003, Cross et al., 2002, Elfring and Hulsink, 2003, Hanna and Walsh, 2002, Hitt and Ireland, 2002, Jarillo, 1989, Lechner and Dowling, 2003, Lipparini and Sobero, 1994, Rangone, 1999, Rogers, 2004, Yli-Renko et al., 2001 and Yli-Renko et al., 2002). However, although it is acknowledged that social capital plays an important role in SME networks, little is known of the dynamics of its utilization in company growth (Maurer & Ebers, 2006). Our aim is to fill this research gap by conducting qualitative, multiple case studies that combine the perspectives of social capital, entrepreneurial and industrial networks in the analysis of SME growth. On the evidence of the existing literature in this field (e.g., Churchill and Lewis, 1983, Jolly, 1997, Moore, 1995a and Moore, 1995b), we propose that the growth of science-and-technology-based SMEs could be described in terms of four overlapping phases: innovation assessment, offering development, commercialization and rapid growth. This process perspective is essential, as organizations have been shown to face different requirements along their developmental paths (Greiner, 1993 and Kazanjian, 1988). Each phase is characterized by different core value activities that require the availability of matching resources and capabilities. Because of their limited internal resources, SMEs are expected to search for and access external resources through various relationships and networks, primarily through the social capital of their core personnel: generally the CEO and his/her team (Hite and Hesterly, 2001, Maurer and Ebers, 2006 and Starr and MacMillan, 1990). It is argued that network mobilization capability and the social capital involved form a critical precondition enabling the firm to transcend from one phase to another. This study explores the identified critical precondition of network mobilization, the aim being to enhance our understanding of the role of social capital in the early growth phases of science-and-technology-based SMEs. We argue that such a deeper understanding would be valuable as the commercial breakthroughs these firms experience provide important innovative product/service offerings for society. More specifically, the objective is to assess how the role of social capital and its dimensions (Nahapiet & Ghoshal, 1998), vary in the transition between the postulated growth phases. Developing a contingency view makes a significant contribution given that research now demonstrates how the value of social capital depends on a number of contexts and contingencies (Maurer & Ebers, 2006). This paper is organized in six sections. Next we examine the concept of social capital and discuss the industrial and social perspectives on networks in the SME context. We then go on to construct a conceptual framework, which identifies the different growth phases and the key networks that enable an SME to shift from one phase to another. The Section 4 describes the methodology used in the study, which was based on a longitudinal multi-case design, and in Section 5, we present our empirical findings. A discussion on the theoretical and managerial implications, followed by our suggestions for further research, conclude the study.