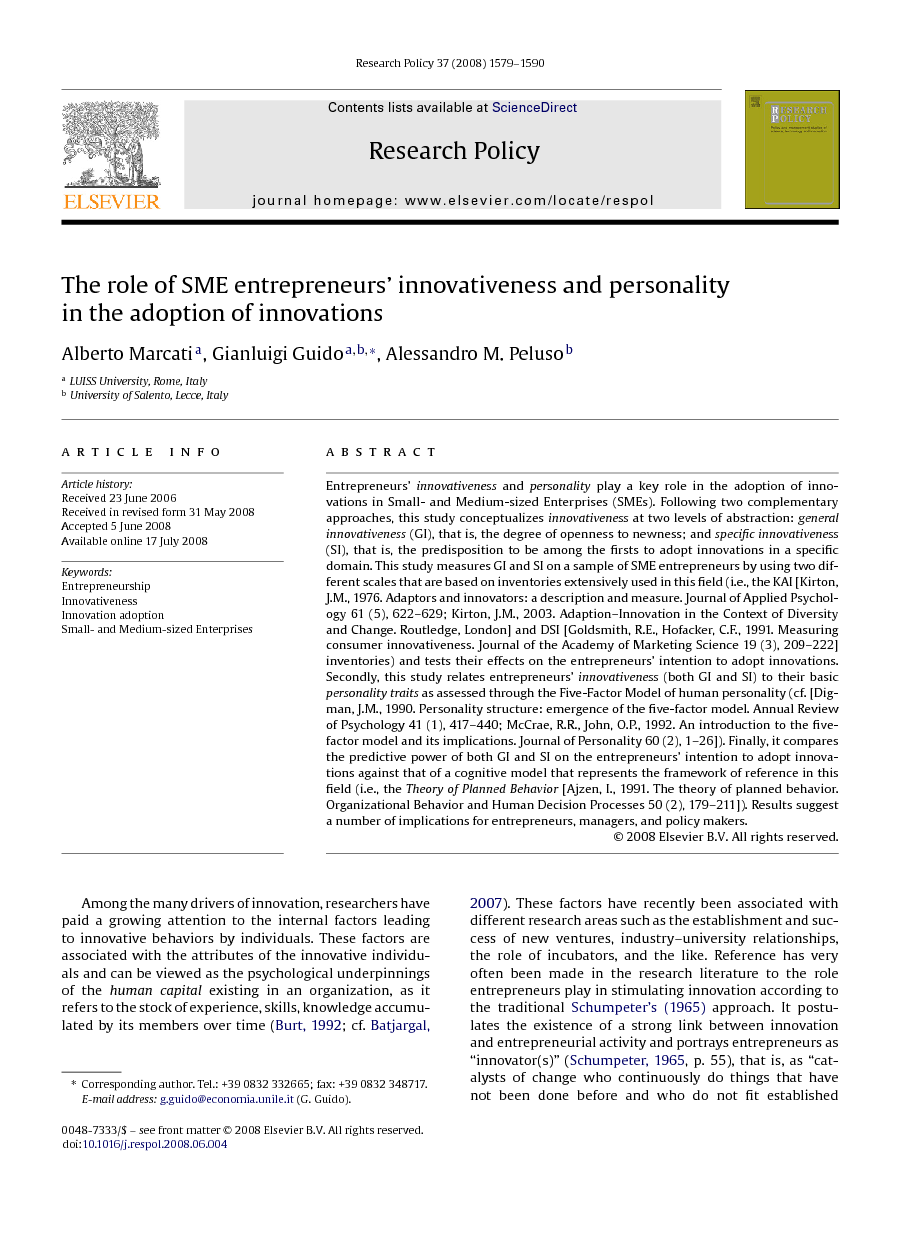 Entrepreneurs’ innovativeness and personality play a key role in the adoption of innovations in Small- and Medium-sized Enterprises (SMEs). Following two complementary approaches, this study conceptualizes innovativeness at two levels of abstraction: general innovativeness (GI), that is, the degree of openness to newness; and specific innovativeness (SI), that is, the predisposition to be among the firsts to adopt innovations in a specific domain. This study measures GI and SI on a sample of SME entrepreneurs by using two different scales that are based on inventories extensively used in this field (i.e., the KAI [Kirton, J.M., 1976. Adaptors and innovators: a description and measure. Journal of Applied Psychology 61 (5), 622–629; Kirton, J.M., 2003. Adaption–Innovation in the Context of Diversity and Change. Routledge, London] and DSI [Goldsmith, R.E., Hofacker, C.F., 1991. Measuring consumer innovativeness. Journal of the Academy of Marketing Science 19 (3), 209–222] inventories) and tests their effects on the entrepreneurs’ intention to adopt innovations. Secondly, this study relates entrepreneurs’ innovativeness (both GI and SI) to their basic personality traits as assessed through the Five-Factor Model of human personality (cf. [Digman, J.M., 1990. Personality structure: emergence of the five-factor model. Annual Review of Psychology 41 (1), 417–440; McCrae, R.R., John, O.P., 1992. An introduction to the five-factor model and its implications. Journal of Personality 60 (2), 1–26]). Finally, it compares the predictive power of both GI and SI on the entrepreneurs’ intention to adopt innovations against that of a cognitive model that represents the framework of reference in this field (i.e., the Theory of Planned Behavior [Ajzen, I., 1991. The theory of planned behavior. Organizational Behavior and Human Decision Processes 50 (2), 179–211]). Results suggest a number of implications for entrepreneurs, managers, and policy makers.

Among the many drivers of innovation, researchers have paid a growing attention to the internal factors leading to innovative behaviors by individuals. These factors are associated with the attributes of the innovative individuals and can be viewed as the psychological underpinnings of the human capital existing in an organization, as it refers to the stock of experience, skills, knowledge accumulated by its members over time ( Burt, 1992; cf. Batjargal, 2007). These factors have recently been associated with different research areas such as the establishment and success of new ventures, industry–university relationships, the role of incubators, and the like. Reference has very often been made in the research literature to the role entrepreneurs play in stimulating innovation according to the traditional Schumpeter's (1965) approach. It postulates the existence of a strong link between innovation and entrepreneurial activity and portrays entrepreneurs as “innovator(s)” ( Schumpeter, 1965, p. 55), that is, as “catalysts of change who continuously do things that have not been done before and who do not fit established patterns” ( Schwartz and Malach-Pines, 2007, p. 2). The focus on entrepreneurs is particularly justified when investigating innovation in the context of Small- and Medium-sized Enterprises (SMEs), where the role of entrepreneurs in fostering innovation is especially important, since the innovation-related research has consistently shown that entrepreneurs are the main locus and driver of innovation. This approach closely matches the traditional analysis of human capital that has focused upon education and experience of individuals (productive skills, capabilities and knowledge, both technical and managerial), that is, all those aspects that may be the object of investment on the part of individuals and that enhance their skills, competences and knowledge. In general, researchers have taken a rather narrow view of the concept by focusing their attention on those elements that are the result of a conscious decision, although at times they have formally endorsed a broader approach. According to an extended view (e.g., Becker, 1992), elements as schooling, a computer training course, expenditures of medical care, and lectures on the virtues of punctuality and honesty also fall in the conceptual domain of human capital, because such elements raise earnings, improve health, or add to a person's good habits over much of his/her lifetime. Although research is increasingly taking into account the social underpinnings of human capital (as exemplified in the notion of social capital), it still eschews its psychological determinants and falls short of fully addressing all the aspects of human capital, thus leaving a gap that needs to be filled. We may get guidance on this analysis from the entrepreneurship literature that has tried to fill this gap by addressing the role of psychological variables in explaining entrepreneurship and in understanding entrepreneurs’ intention to adopt innovations (Buttner and Gryskiewicz, 1993, Foxall and Payne, 1989 and Zhao and Seibert, 2006). Indeed, the importance of psychological determinants in the decision to adopt an innovation is well documented in studies of innovation adoption, as highlighted by Rogers (2003) in his review of the innovation diffusion literature. Consistent with the broader approach suggested by Becker (1992), we maintain that these internal factors dealing with personality traits may be considered as the basic psychological underpinnings of human capital. Based on these research results, this article focuses on SME entrepreneurs’ psychological traits, as these internal factors potentially account for their individual and behavioral differences when facing innovations. Therefore, we aim to • Explore entrepreneurs’ psychological characters, by referring to their propensity to innovate in general or in their professional life and in the specific management domain; • Relate such a propensity to innovate to more basic and general psychological personality traits, by taking an integrated and broad approach to the structure of personality traits; • Set the analysis in a broader framework, by comparing the explanatory power of these both basic and specific psychological traits with the power provided by a cognitive standard approach. More specifically, our study has a threefold objective: (1) to assess the impact of entrepreneurs’ innovative propensity, both general and domain-specific (general innovativeness, GI, and domain-specific innovativeness, SI), on their intention to adopt innovations; (2) to investigate the relationship between entrepreneurs’ general and domain-specific innovativeness and their personality, in order to dress their profile in terms of a widely accepted personality theory that couches personality in terms of five basic factors (Five-Factor Model, or “Big Five” Theory of personality); (3) to compare the predictive power of such an explanation of the intention to adopt innovations against the standard cognitive model in this field, namely, Ajzen's (1991)Theory of Planned Behavior. According to this theory, the intention to adopt innovations is a conscious decision determined by the attitude towards such a behavior and the perception of the factors surrounding it (advantages and disadvantages deriving from the behavior, social pressure towards or against it, and ease or difficulty of engaging in that behavior). We try to verify whether GI and SI could be better predictors of behavioral intention than the variables that are considered by Ajzen (1991) in his theory. This paper is organized as follows. The first section will explore the entrepreneurs’ innovativeness construct in its two aspects: general and specific innovativeness, which refer to one's creative style of thinking and his/her speed in adopting innovations in a specific domain, respectively ( Kirton, 1976, Kirton, 2003 and Goldsmith and Hofacker, 1991). The second section will relate both these aspects of innovativeness to the Five-Factor Model of personality ( Digman, 1990 and McCrae and John, 1992). The third section will introduce the Theory of Planned Behavior ( Ajzen, 1991), as it is widely applied in the analysis of innovative behavior and served as competing model in our research. The fourth and fifth sections will illustrate the research methodology and the obtained results, respectively, while the final section will discuss results and their managerial and policy implications.