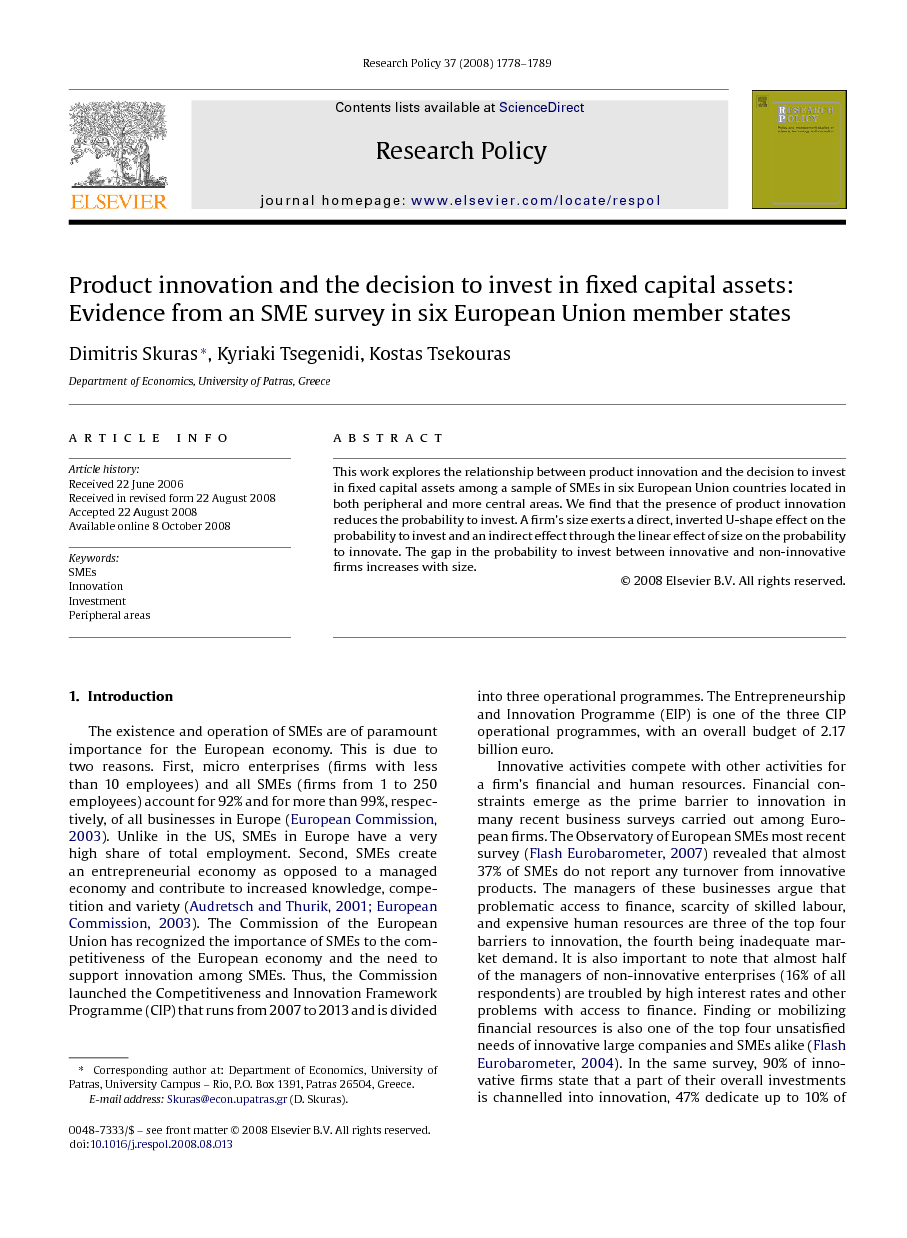 In this work we find strong indications that, among a sample of SMEs in six European Union member states, innovative activity and investments in fixed capital assets are competitive processes, because the presence of innovative activity reduces the probability that investments in fixed capital assets have been undertaken by the same firm and in a time span covering 5 years. Innovation and investments in fixed assets share the common economic characteristics of uncertainty, irreversibility and the opportunity to postpone. Our analysis shows that as scale economies are exploited and the SMEs in our sample reach the size of about 150 employees, the probability to innovate becomes very much weighted on the probability to invest. Thus, the gap in the probability to invest between innovating and non-innovating firms widens. This is also governed by the region’s GDP growth, showing that more peripheral dynamic regions with generally higher GDP growth rates provide for a higher probability to invest. This trade-off between investment and innovation reveals the ambiguity prevailing in the fragmented policies supporting innovation, investment and access to finance in the past. Under the Entrepreneurship and Innovation Operational Programmes of the CIP Framework Programme, presented in Section 1 of this paper, the European Commission consolidates its instruments that provide access to finance for SMEs through venture capital investments and loan guarantee instruments. The SME Guarantee Facility (SMEGF) managed by the European Investment Fund coordinates efforts to increase access to finance for the start-up and growth of SMEs and investment in innovation activities. The approach presented in this paper is only indicative of the specific regions and countries, and thus no strict policy recommendations can be based on the interpretation of our results. However these serve as a starting point for preliminary discussions concerning the relationship between innovation and capital accumulation as well as the effect of firm size on the probability to invest. Our results indicate that the conventional view holding the small firm as a constrained firm may not be entirely correct. When innovation and investments in fixed capital assets are simultaneously considered, the larger firm is more constrained and the probability to invest is lower, in relation to its size. This is due to the fact that larger firms are more likely to innovate, and thus, indirectly, less likely to invest. In another, completely reverse angle, one may argue that since larger firms have already invested above a minimum efficient scale they are able to forgo further investments in favour of innovative activities. Unfortunately, our econometric analysis framework does not allow for a formal causality test that would permit us to test this hypothesis formally. However, Fig. 1 allows us to speculate that even for firms which are below a minimum efficient scale of around 150 employees, and thus in need for further investments, the gap in the probability to invest between innovators and non-innovators increases. The discussion above is concerned with evidence on a micro scale. On a macro scale, Aghion and Howitt (1992) introduced a Schumpeterian-like growth model of creative destruction where firms invest resources in research to introduce a new product that renders the previous product obsolete, with the prospect of monopoly profits. In this model, competition and growth are inversely related. In more recent versions of this model it is shown that a more competitive structure may contribute to economic growth and that capital accumulation and innovation are complementary processes in the growth process (Howitt and Aghion, 1998). If the micro data show competition between capital growth and innovation then the organizations creating the opportunities are not the same organizations that exploit the opportunities, and the entrepreneurial act of starting a new firm serves definitely as a mechanism for knowledge spillovers (Audretsch, 1995). In our case it may be that larger firms create opportunities (innovate) but smaller firms exploit the opportunities (invest). In this perspective, the micro evidence of competition between innovation and capital accumulation does not necessarily contradict the macro evidence of complementarity. On the contrary, our evidence may indicate that an entrepreneurial society allocates resources to capital and innovation by sustaining rivalry between capital accumulation and innovation within a firm and, in turn, this firm-specific rivalry gives rise to economy-wide complementarities of capital and innovation. One way to achieve this is by disentangling the role of the firm-innovator from that of the production-oriented imitator. However, our results do not go so far as to support this argument empirically.