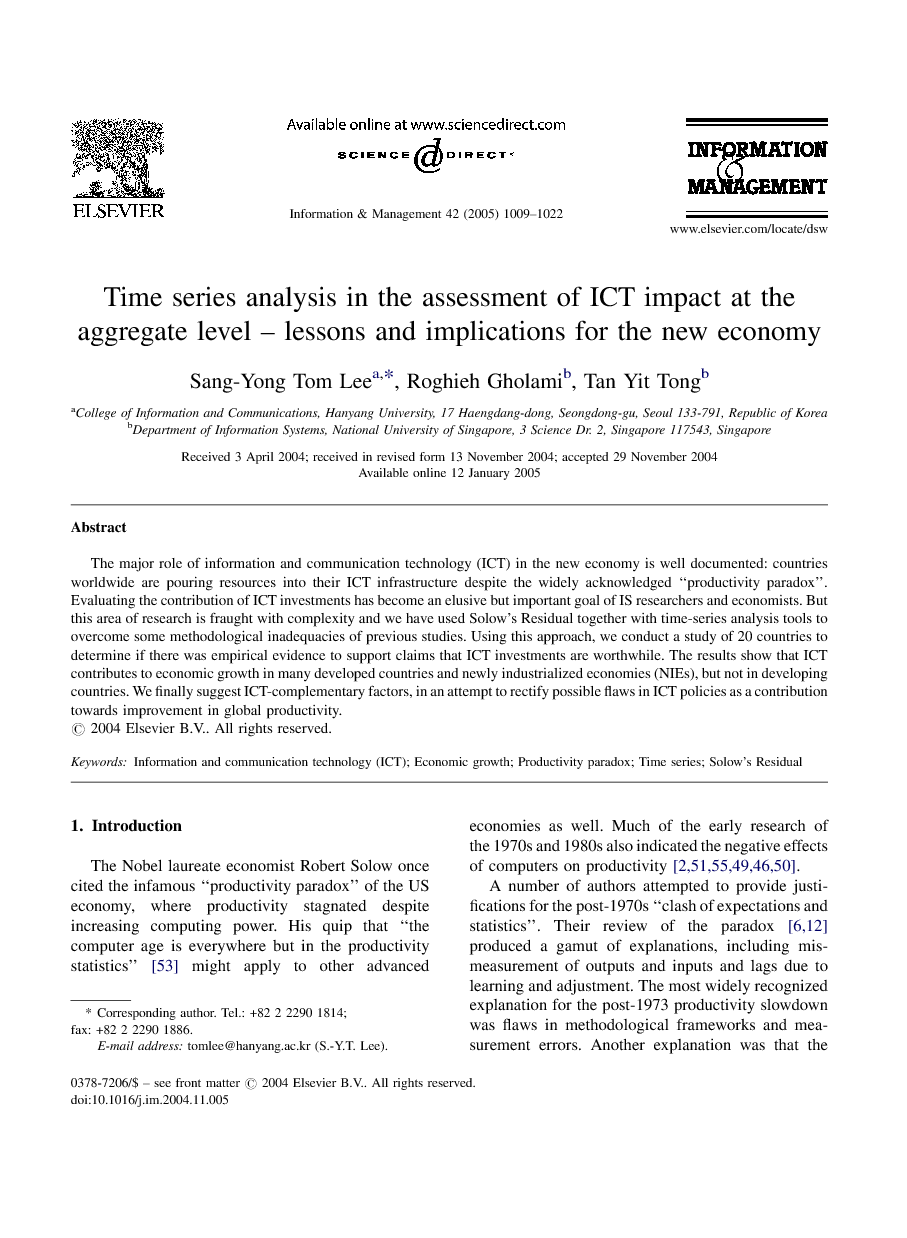 The major role of information and communication technology (ICT) in the new economy is well documented: countries worldwide are pouring resources into their ICT infrastructure despite the widely acknowledged “productivity paradox”. Evaluating the contribution of ICT investments has become an elusive but important goal of IS researchers and economists. But this area of research is fraught with complexity and we have used Solow's Residual together with time-series analysis tools to overcome some methodological inadequacies of previous studies. Using this approach, we conduct a study of 20 countries to determine if there was empirical evidence to support claims that ICT investments are worthwhile. The results show that ICT contributes to economic growth in many developed countries and newly industrialized economies (NIEs), but not in developing countries. We finally suggest ICT-complementary factors, in an attempt to rectify possible flaws in ICT policies as a contribution towards improvement in global productivity.

ICT and productivity have been considered by many scholars. However, our study is among the first to approach the topic employing Solow's Residual instead of tangible outputs and time series analysis tools at the country level. Consistent with previous findings [15], we discovered that ICT investments have been contributing to improvement in the national productivity of several developed countries and newly industrialized economies (NIEs), but not of developing nations. To allow for the limitations in the data sets, the material was obtained from the “best” available – even if only one set of ICT data series provided positive evidence of the relationship, the results from the other ICT data series were discarded. Even though there is no agreement on the minimum number of periods required in time series statistics tests, scholars have tacitly agreed that cointegration testing on small samples still leaves something to be desired [4]. Thus the data period analyzed here may be insufficient to capture long-term effects. In addition, inferences from the Granger causality tests may be unfair for the relatively small sample set of annual values for A and ICT, which could ignore short-run effects. The values of the ICT variable are problematic also: there are no sources that provide these values over a period of more than 10 years. Consequently, telecommunications investments had to be used as a proxy, even though they could prove inadequate in reflecting the full effect of ICT in some countries’ productivity. Nonetheless, we believe that the study has contributed to development literature and provided useful groundwork for time series analyses in ICT and productivity research. In recent years, studies have recommended ICT production-close-to-use, which promotes the interaction between ICT producers and users, and facilitates the development of software and information services. According to Kraemer and Dedrick [32], policies could include: the promotion of small business ICT use, provision of financial support to ICT companies, and encouragement of partnerships between local firms and multinationals. Indeed, countrywide diffusion of technology could deliver increasing returns to investments and competitiveness, given today's global markets and pervasiveness of the Internet and e-commerce. From the consistency between our findings and previous studies, countries may need to put in place ICT-complementary factors in tandem with their ICT investments. The proven existence of a long-term relationship between ICT and growth in several countries would encourage belief that the phenomenon is sustainable, and that nations can rely on ICT investments to attain economic expansion, rather than resort to an increase in the traditional production inputs of human labor and capital.