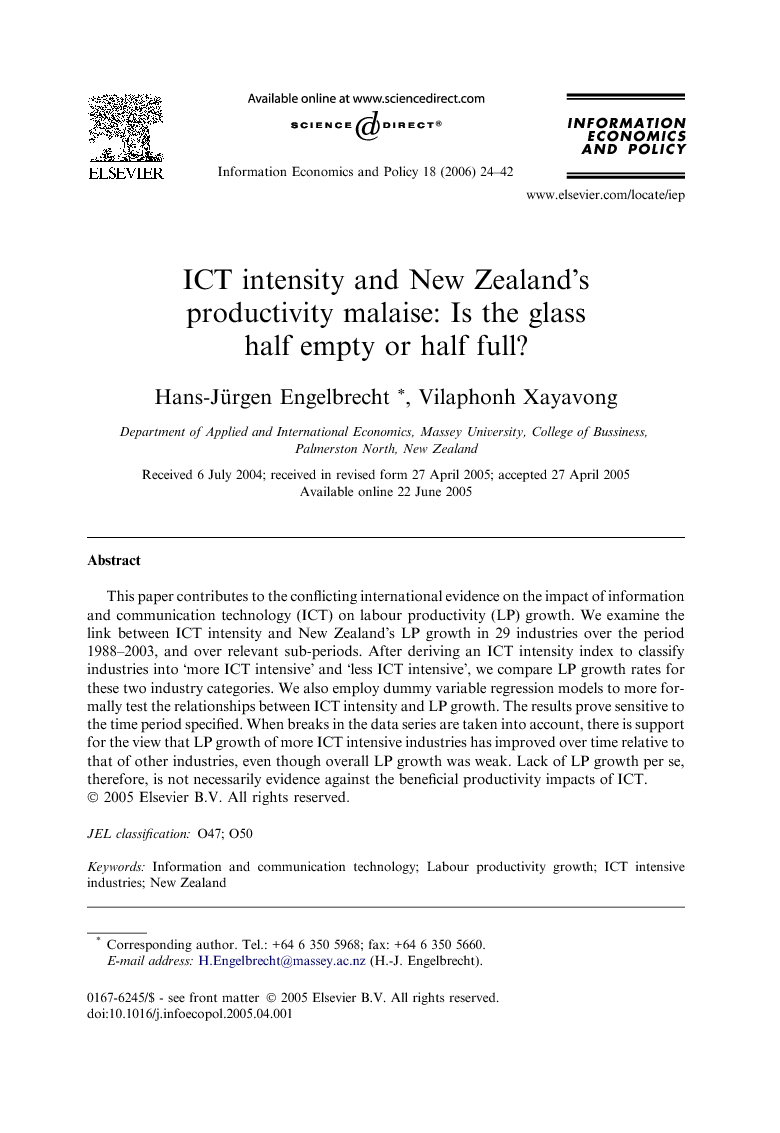 This paper contributes to the conflicting international evidence on the impact of information and communication technology (ICT) on labour productivity (LP) growth. We examine the link between ICT intensity and New Zealand’s LP growth in 29 industries over the period 1988–2003, and over relevant sub-periods. After deriving an ICT intensity index to classify industries into ‘more ICT intensive’ and ‘less ICT intensive’, we compare LP growth rates for these two industry categories. We also employ dummy variable regression models to more formally test the relationships between ICT intensity and LP growth. The results prove sensitive to the time period specified. When breaks in the data series are taken into account, there is support for the view that LP growth of more ICT intensive industries has improved over time relative to that of other industries, even though overall LP growth was weak. Lack of LP growth per se, therefore, is not necessarily evidence against the beneficial productivity impacts of ICT.

The OECD has emphasized that information and communication technology (ICT) has been, and remains to be, an important driver of growth and productivity in its member countries (OECD, 2003a). Recent improvements in growth and productivity performance in the US and many other OECD countries have been linked to the expansion of the production of ICT goods and to the use of ICT to enhance efficiency and innovation (OECD, 2003a). A series of reports by the Australian National Office for the Information Economy (NOIE) also indicates that many industries in Australia seem to have gained substantial productivity benefits from the use of ICT.1 New Zealand (NZ) is in the leading group of countries as measured by ICT uptake indicators (OECD, 2003a, p. 10).2 Moreover, its reforms and policy changes implemented in order to stimulate the development of a knowledge-based economy seem to be heading in the right direction (Frederick and McIlroy, 1999). Indeed, NZ’s recent rate of economic growth has remained strong despite a worldwide downturn starting in early 2001 (Shapiro, 2003).3 However, there are concerns about NZ’s productivity performance. Scarpetta et al. (2000, p. 15) and OECD (2003b, p. 138) report that NZ’s productivity growth has been among the lowest in the OECD during the past two decades. Bar-Shira et al. (2003), comparing the productivity performance of the 25 richest economies, rank NZ at the bottom of that group in 1990. Despite a number of NZ studies indicating that productivity growth improved from 1993 onwards (Razzak, 2003 and Black et al., 2003), Shapiro (2003) argues that it has not accelerated after 1995. Färe et al. (2003) and OECD (2004) also conclude that so far the productivity improvements have not been sufficient to generate the conditions for stronger trend growth in GDP per capita that would lift NZ back into the top half of the OECD, the stated goal of government policy. Has something gone wrong? Have the economic reforms launched in 1984 failed? There are a large number of studies that have attempted to provide answers to these questions, but most of them have little to say about the contribution of ICT.4 This paper begins to fill this gap by examining the impact of ICT on NZ’s productivity performance for the period 1988–2003. Following Stiroh (2002a), our analysis focuses on labour productivity (LP) growth of industries that are classified as either more ICT intensive or less ICT intensive (compared to the average ICT intensity across all industries).5 We find that LP growth of more ICT intensive industries has improved over time relative to that of less ICT intensive industries, but that overall, LP growth has been weak. To put it differently, the restrained NZ LP performance seems to have been due to the decline in LP growth of less ICT intensive industries.6 This emphasizes the point we wish to make, i.e., that in many cases it is not productivity growth per se, but the relative productivity performance of more versus less ICT intensive industries that indicates the beneficial productivity impacts of ICT. In the extreme case, one could imagine a situation where for reasons unrelated to ICT, productivity growth for all industries in an economy is negative, but where the better relative performance of more ICT intensive industries still indicates the beneficial impacts of ICT. The paper is structured as follows. Section 2 introduces the regression models used to assess the impact of ICT on LP growth. The selection of variables and data used to estimate LP is also discussed. Section 3 reports the methodology employed to determine the ICT intensity of the 29 industries included in the analysis. Section 4 presents our empirical findings. This is followed by a concluding section.

We examine the contribution of ICT to NZ’s LP performance over the period 1988–2003. An ICT intensity index measuring the share of ICT inputs in total industry inputs is derived using NZ specific data. That enables us to divide industries into more ICT intensive and less ICT intensive. Some special features of the NZ economy, such as the relatively high ICT intensity of the agricultural industry, are also considered. While many factors are likely to have influenced LP growth, or lack thereof, in NZ, our analysis suggests that LP growth of more ICT intensive industries has improved relative to that of other industries. Like in much of the research on the role of ICT in productivity growth, the meaning of our results lies in the eyes of the beholder. If, as argued by David (1990), it takes as long to realize the potential productivity increases from ICT as it did to realize the ones from electricity (i.e., four decades or more), one may argue that in the case of NZ, the productivity turn-up from large ICT investments is just around the corner, with the differential LP performance of more ICT intensive versus less ICT intensive industries during the period 1993–2003 being an early sign of this. However, it is one thing to show some correlation between LP growth and relative ICT intensity, another to determine how much productivity growth can be attributed to technological, organizational and managerial innovations associated with ICT. Moreover, like in the case of the findings for EU economies reported by Ark et al. (2002), further research is required to assertion whether our results are mainly due to measurement issues, such as the (mis)-measurement of some services industries outputs, as compared to economic factors.19 It is one of the great paradoxes of the knowledge-based and new economy that it has become much more of an unknown economy compared to the industrial economy preceding it (Engelbrecht, 2003). In short, our results cannot be taken as conclusive evidence that ICT is having a positive impact on LP in NZ. Rather, they are suggestive of this and have to be strengthened by further research. This may include the following: (i) Further research on the ICT intensity index: data for more than one year could be used to derive the index, and to determine how it may have changed over time. Moreover, alternative indices should be explored, including use of a ‘total’ ICT intensity index that takes the amount of ICT embodied in non-ICT inputs into account instead of just measuring the direct use of ICT inputs. This would shed further light on the question whether our division of industries into more ICT intensive and less ICT intensive is appropriate. (2) There is a need for more firm-level studies that can complement those at the economy-wide and industry level. In particular, such studies have highlighted the importance of complementary organizational investments, e.g., restructuring of business processes and work practices, as a pre-requisite for unlocking the potential of ICT for productivity improvements (Brynjolfsson and Hitt, 2000). Firm-level studies seem to find stronger ICT impacts on output and productivity growth (Ark, 2002). While some survey-based NZ-specific studies exist (Knuckey et al., 2002, chapter 10), a lack of appropriate ICT investment, intangible investment and capital stock data has hampered research. (3) The relationship between LP and TFP for more ICT intensive versus less ICT intensive industries should be explored. However, NZ data problems are likely to hamper such efforts. For example, Razzak (2003) argues that TFP, in contrast to LP, is an unreliable measure of productivity in the NZ case. (4) Related to (3), there is a need to explicitly estimate ICT-related inter-industry spillovers. However, this would require the availability of industry-level ICT capital stocks. One may speculate to what extent our LP growth estimates are affected by NZ’s low capital–labour ratio.20 Has low physical capital accumulation suppressed LP growth across the economy? Would more ICT intensive industries have shown an acceleration in LP growth in absolute terms had only the capital–labour ratio increased instead of being stagnant? The NZ Treasury view that the best bet for increasing the country’s growth performance in the medium term is through capital deepening that raises LP (Treasury, 2004, p. 48) seems to fit this hypothesis, although a thorough investigation of this question would have to address differences in the type of physical capital accumulation (i.e., ICT capital versus non-ICT capital), human capital accumulation, the role of embodied and disembodied knowledge spillovers, and the possible interactions of these and other growth determinants. It might raise some awkward questions about the productivity impact of the Employment Contracts Act that liberalized the labour market and that was in force during most of the 1990s (see Maloney, 1998), but other explanations of the stagnant capital–labour ratio are also possible. Raising productivity growth is seen as the main economic challenge facing NZ (OECD, 2004). There is already some indication that LP growth accelerated from the first to the second half of the 1990s.21 We would like to interpret our findings as a piece of supporting evidence for the optimistic view that measurable LP improvements are in the pipeline, i.e., that the fruits of past economic reforms, present growth promoting policy settings and intangible organizational capital accumulation related to the use of ICT take time to materialize, but that they will eventually materialize, thereby lifting NZ’s economic performance. Only time will tell whether this view is correct.