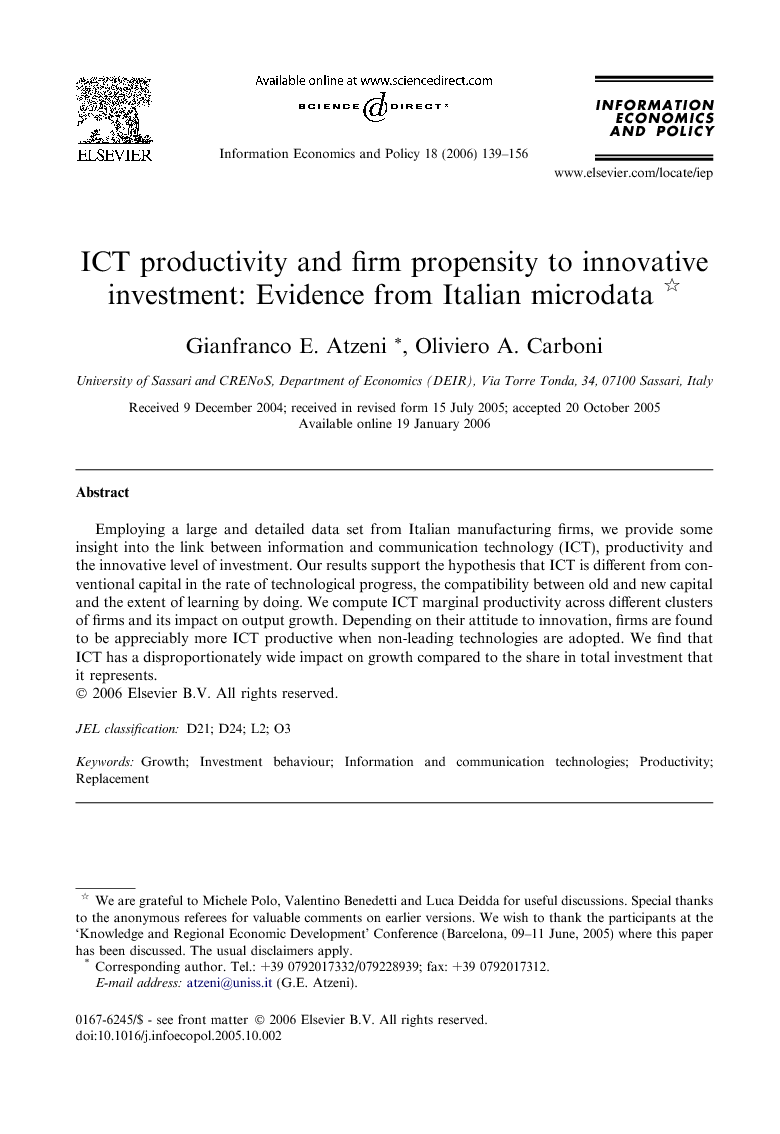 Employing a large and detailed data set from Italian manufacturing firms, we provide some insight into the link between information and communication technology (ICT), productivity and the innovative level of investment. Our results support the hypothesis that ICT is different from conventional capital in the rate of technological progress, the compatibility between old and new capital and the extent of learning by doing. We compute ICT marginal productivity across different clusters of firms and its impact on output growth. Depending on their attitude to innovation, firms are found to be appreciably more ICT productive when non-leading technologies are adopted. We find that ICT has a disproportionately wide impact on growth compared to the share in total investment that it represents.

A number of scholars have explored the link between ICT and productivity growth at firm level. Although some research concludes that ICT has negative or insignificant effects (Loveman, 1994 and Berndt and Morrison, 1995 among others), since the beginning of 1990s there has been growing consensus that there is a strong positive link (Barua and Lee, 1997, Lehr and Lichtenberg, 1999, Brynjolfsson and Hitt, 2000a and Greenan et al., 2001). Research on ICT productivity has been carried out in various ways and can be summarised under three general headings: workplace and labour reorganisation, bias in the estimations, and vintage capital models. According to a wide range of studies ICT requires significant workplace and labour reorganisation at firm level. ICT is only a small component of a complex set of causalities (skill, infrastructure, organisation, diffusion, adoption, adaptation, etc.) which include both tangible and intangible aspects. If such ‘complete cluster of associate complements’ do not improve together, many ICT benefits may be lost and ICT becomes mainly a cause of higher costs rather than improving output (Brynjolfsson and Yang, 1997 and Bresnahan et al., 2002). Several contributions focus on ‘skill-biased’ technological change, according to which investment in ICT is associated with reductions in the workforce and an increase in the demand for highly educated workers as well as in workplace reorganisation (Black and Lynch, 2001, Bresnahan et al., 2002, Caroli and Van Reenen, 2002, Acemoglu, 2002, Piva et al., 2005 and Pini and Santangelo, 2005). Some research argues that low ICT productivity may come from the bias in the econometric estimation, which is a result of the peculiarities of ICT. Siegel (1997) shows that investment in ICT can cause changes in output and labour quality, which are not properly accounted for when estimating the growth of the real output and inputs. Thus it gives rise to a measurement error in the dependent variable and biases ICT productivity estimates. A third line of research reconsiders ICT productivity in the light of vintage capital models. It argues that the characteristics of ICT may exacerbate learning problems when new capital is introduced in the production process (Cooley et al., 1997). Yorukoglu (1998) emphasises that information technology intrinsically differs from conventional capital in the rate of technological advance, the compatibility between old and new capital and the extent of learning by doing. ICT investment is lumpier than conventional capital and requires larger and more frequent learning. Using a model where replacement (i.e. the substitution of expired capital for new and more innovative one) is explicitly considered, he finds large drops in productivity at replacement dates. Since learning-by-doing is implicitly associated with the level of innovation the new capital embodies, he concludes that learning by doing, together with the very nature of information technology, may be at the cause of the downward bias of ICT productivity estimates. In this paper we investigate the link between the innovative level of investment and ICT productivity in a large and detailed sample of Italian firms during the period 1995–97. Focussing on the additional contribution of ICT investment to productivity, we find evidence of such compatibility problems. These appear to be more severe when firms replace traditional with more innovative capital. The introduction of new technology has a twofold effect on productivity. On one hand, the technology embodied in new and more efficient capital has positive effects on productivity. On the other technological improvements brings uncertainty due to learning and re-organisational effects. These negatively affect ICT returns. Following up this idea, we specifically distinguish firm investment behaviour according to the allocation of additional or substitutive capital, on one hand, and innovative or technologically standardised capital, on the other. We explore whether such behaviour, and a firm’s technological investment aptitude, have any role in explaining ICT productivity. In line with the prescriptions of vintage capital models, firms display a far greater ICT productivity if they adopt non-latest technology. In fact, rapid technological improvements in ICT capital exacerbate standardization problems, which implies that there is weak compatibility between different vintages of capital. Conversely, little and non-frequent investment favours the exploitation of apprentisage dynamics, which are not continuously interrupted by changes in the composition of capital quality. We find that ICT has a disproportionately wide impact on growth contribution compared to the share in total investment that it represents. We are unable to distinguish between various types of capital, and neither ICT capital stock nor the dynamic structure of ICT investment are available from the data set. Information about ICT expenditure is displayed at three-year level (1995–1997), preventing us from either deflating ICT prices or constructing the ICT capital stock. Our main methodological concern is thus to look for a measure of ICT productivity which does not depend on ICT capital stock measurement (i.e. hedonic prices and perpetual inventory methods). A Partial Price Change procedure is adopted working at price rather than output level. This method measures the productivity changes through price variations without constructing the capital stock or quantifying its degree of vintage. This makes this work different from the common empirical analyses, in which the discussion on productivity is based on longer time series and on more standardized ways of deflating ICT prices. Exploiting the rich information about firm investment behaviour in the dataset, we estimate the additional contribution of ICT and non-ICT capital, thus advancing our knowledge of the state of ICT productivity in Italy. The paper is organised as follows: Section 2 contains a description of the data set. Section 3 outlines the methodology employed. Section 4 provides the main econometric findings for ICT productivity. Section 5 puts forward some considerations on the contribution of ICT to output growth. Section 6 contains the conclusions and policy implications.

This work is a small contribution towards understanding the link between ICT productivity and firms’ investment behaviour. When investment is mainly guided by replacement, the average firm behaves notably worse than the others. Such firms have much lower ICT productivity than the low-replacing (i.e. high-introducing) ones. For the latter ICT appears particularly efficient. However, such efficiency is linked to the technological level, which is consistently different in the two groups. A similar result is found when the sample is split according to the degree of innovative investment. This is also confirmed across the sub-samples. Within the low-replacing group, the cluster of firms investing in ‘standardised’ technology, has the highest ICT productivity. This strongly suggests that learning by doing processes are present which are linked to the degree of novelty of the technology. Investing in non-leading technologies appears to be both more remunerative and more effective in terms of output growth than investing in ladder technology. This latter statement would be hard to accept without considering further the specifics of ICT investment. ICT requires some adoption time. In the early stage of introduction new technologies need higher levels of skills because of the risks and complexity of the necessary learning processes. Furthermore, rapid technological improvements in ICT capital lead to standardization problems. If replacement occurs along the growing side of the learning curve, old and still accumulating benefits of the already installed ICT might be lost. At the same time, ladder technology causes new frictions in the production process. Continuous capital renewal per se is not necessarily the best solution if it requires a cumulative learning process that cannot be skipped or interrupted. Relatively smaller short-term marginal productivity is to be expected as a signal of ICT integration and the state of learning. New technologies potentially strengthen innovating firms, which enhance their set of ‘eligible choices’ and gain many benefits in term of performance. However, this only appears to be true if the problems of compatibility between old and new investment are properly tackled. This is particularly the case for ICT. While it is relatively easy to over-invest (over-replace) in high levels of technology, the pace of firms’ adaptation does not necessarily follow the same speed, and friction between different vintages of capital are likely to occur. ICT is tacit and firm specific in many aspects, making its transfer and use particularly uncertain. This suggests the requirement of complementarities to make ICT effective, without which it turns mainly into higher cost rather than output improvements. For policy assessment purposes this means that a well-defined set of technological purpose oriented activities, which embrace both tangible and intangible aspects, have to be started. Firms ought to reduce friction and favour the introduction of ICT into the existing structure. A critical part of successful ICT implementation is the firm’s commitment to complementary investment in physical assets, workforce re-skilling and work practices, in order to reap the potential benefits. Firms should be cautious about upgrading their technology too frequently or using very high technology, since it may involve many complementary costs. The risk is that many benefits may be lost and investing in ICT only modestly impacts on performance. This appears particularly relevant, for example, in the designing of programs of ICT subsidies. By failing to consider all the elements necessary for using new technologies effectively, grants might favour over-investment in ICT without improving the firm ICT absorption capacity. Another implication of our findings is that ICT is much more important than non-ICT in determining output growth. In line with Brynjolfsson and Yang, 1997, Brynjolfsson and Hitt, 1996, Brynjolfsson and Hitt, 2000b, Jorgenson and Stiroh, 2000 and Whelan, 2000, we state that rather being under-productive, ICT has an impact on output growth which is disproportionately wide compared to the share in total investment it represents. Again, the importance of implementing an appropriate ICT policy appears to be crucial to the firm’s performance. While the role of the learning process is not definitely clear (data time horizon does not allow any further inquiry), it appears that there are other factors involved in the whole process: reorganization, temporal lag and externalities among others. Complete analysis should be shaped so as to capture those factors in order to cast more light on the ICT black box.