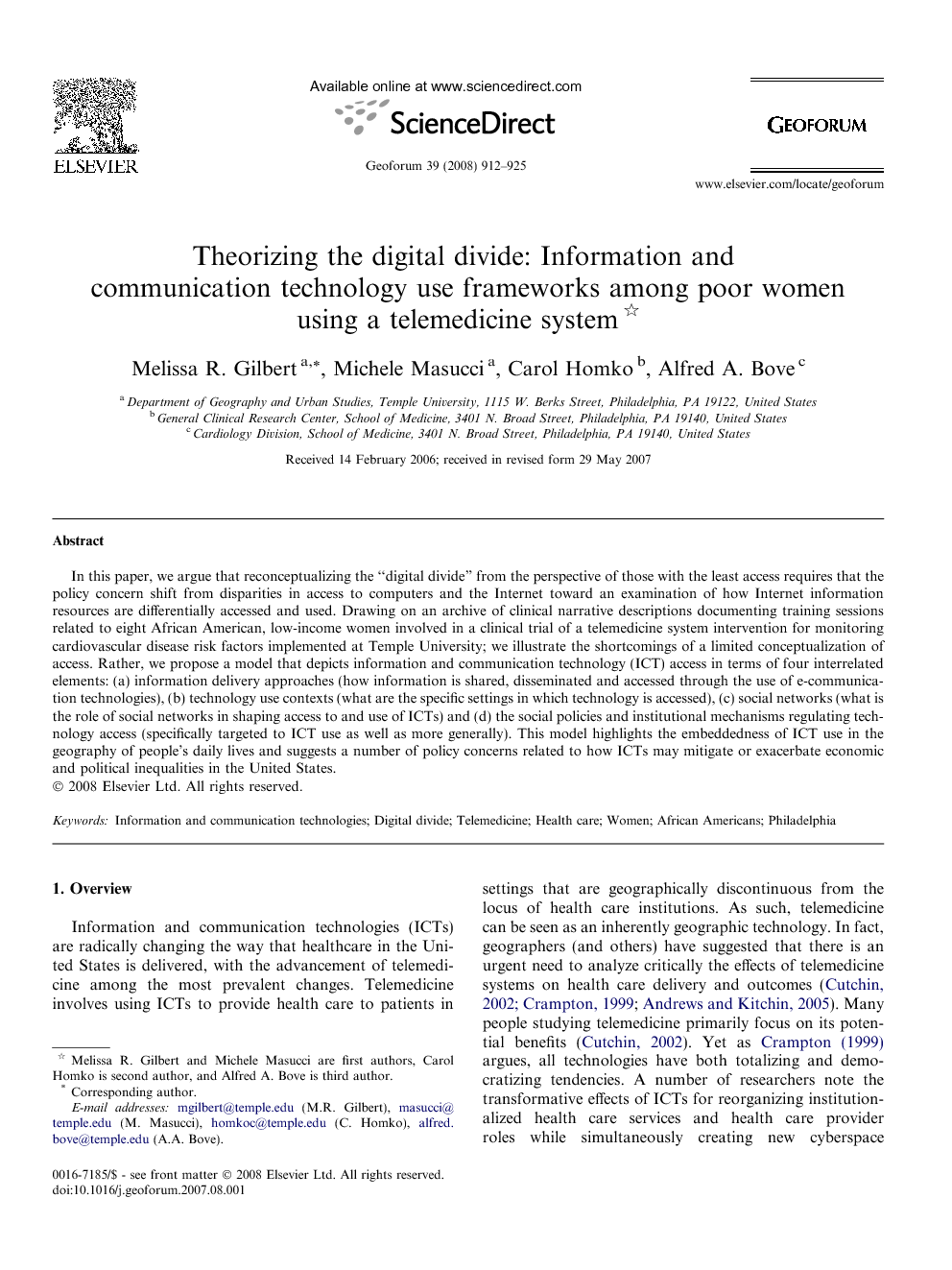 In this paper, we argue that reconceptualizing the “digital divide” from the perspective of those with the least access requires that the policy concern shift from disparities in access to computers and the Internet toward an examination of how Internet information resources are differentially accessed and used. Drawing on an archive of clinical narrative descriptions documenting training sessions related to eight African American, low-income women involved in a clinical trial of a telemedicine system intervention for monitoring cardiovascular disease risk factors implemented at Temple University; we illustrate the shortcomings of a limited conceptualization of access. Rather, we propose a model that depicts information and communication technology (ICT) access in terms of four interrelated elements: (a) information delivery approaches (how information is shared, disseminated and accessed through the use of e-communication technologies), (b) technology use contexts (what are the specific settings in which technology is accessed), (c) social networks (what is the role of social networks in shaping access to and use of ICTs) and (d) the social policies and institutional mechanisms regulating technology access (specifically targeted to ICT use as well as more generally). This model highlights the embeddedness of ICT use in the geography of people’s daily lives and suggests a number of policy concerns related to how ICTs may mitigate or exacerbate economic and political inequalities in the United States.

In conclusion, we argue that our reconceptualization of the digital divide from the perspective of some of the most marginalized people in our society shifts the policy thrust from simply overcoming delivery barriers to understanding what strategies may work to help empower poor people through the use of ICTs in daily life. It requires us to understand the embeddedness of people in place-based communities and social networks as well as the unevenness of ICT resources and information across space. It is important that public policy invests in strategies that will improve access to computers and the Internet such as investing in community technology centers, donating computers to community organizations, providing training programs for supporting workforce development and creating publicly accessible information resources. There is no question that we need to enhance substantially the ICT resources available in poor communities. However, these approaches have not fundamentally altered the landscape of empowerment among marginalized groups nor have they democratized information resources. We suggest that by learning what strategies are being employed successfully by marginalized populations, both at the individual and collective scales, we can gain a better understanding of how ICTs can be a part of improving quality of life. Our observations show that among the strategies used by the women to overcome digital divide barriers were: sharing computers with place-based social networks, particularly family members, accessing educational programs at local community centers and libraries, and coupling ICT training with engagement of needed services. These experiences provided enough ICT background for nearly all of the women to master the use of the telemedicine system in the digital divide sub-study. This demonstrates that a reconceptualized policy framework for addressing ICT approaches that reflects the perspectives of marginalized populations might link investments in community information needs to the specific challenges faced. For the women in the digital divide sub-study, it is clear that health information needs should be central to policy-making efforts. A number of policy concerns need to be addressed in order to ensure that poor people are not marginalized further by linking community information needs to specific challenges such as health care. First, we need a broader discussion of who has the right to decide what information should be made available in the public domain. Clearly, the implications for privacy are far reaching for everyone. Yet, poor people are monitored extensively through their participation in the social welfare system; and their privacy concerns could be greatly exacerbated as health care delivery is increasingly integrated with the use of ICTs. Second, a re-evaluation of public policies related to the intertwining of technological and basic literacies as prerequisites to accessing health, education, jobs and decision making processes. The use of ICTs has the potential to exacerbate inequalities in the United States so we need to think carefully about how we embed ICT use in public policy. Thirdly, an examination of the costs and benefits of improving information accessibility towards the goals of decreasing health gaps for racialized minority populations and women in the United States. Clearly providing infrastructure is not enough, however costly. But finding better ways to empower marginalized people in relation to their health is likely to have long-term benefits to society in terms of decreased medical costs.