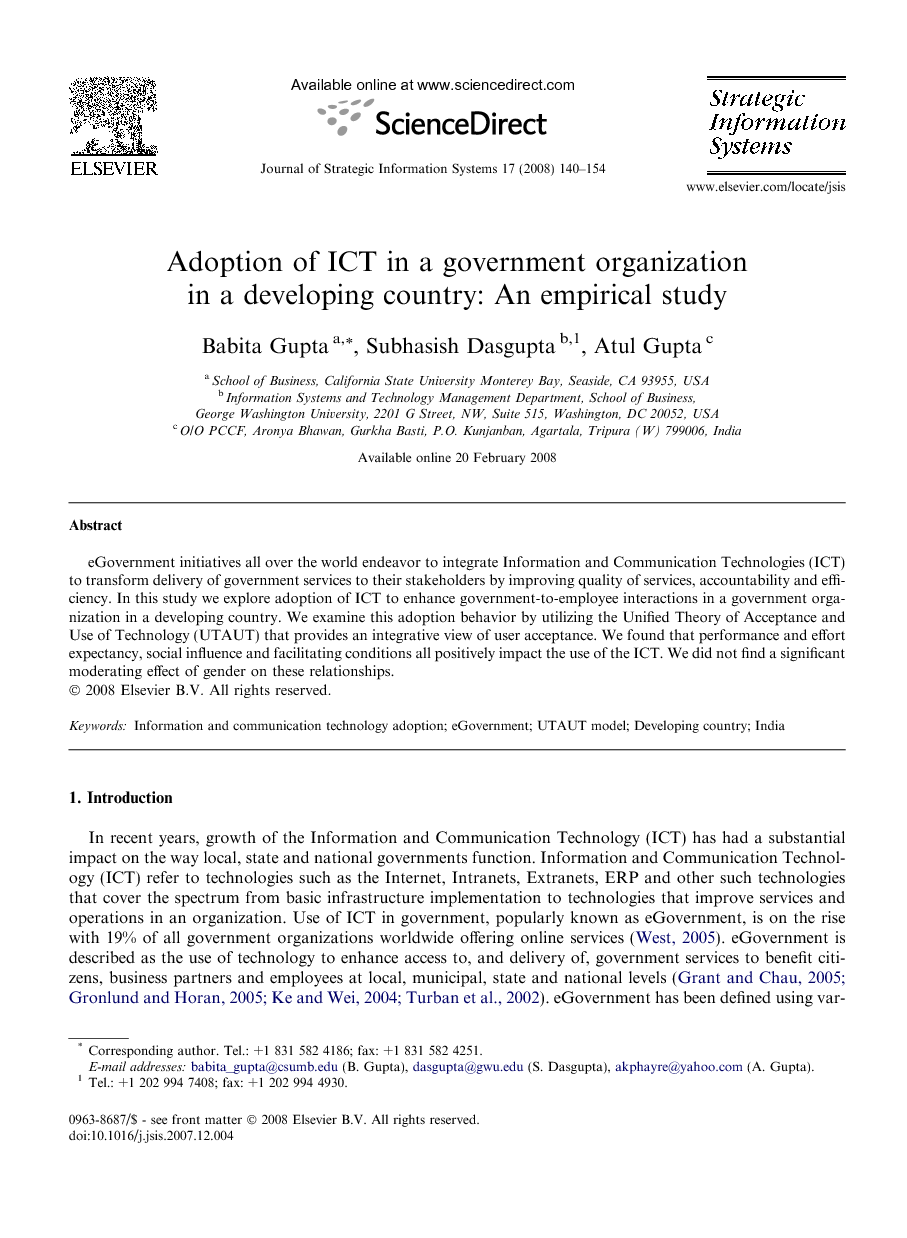 eGovernment initiatives all over the world endeavor to integrate Information and Communication Technologies (ICT) to transform delivery of government services to their stakeholders by improving quality of services, accountability and efficiency. In this study we explore adoption of ICT to enhance government-to-employee interactions in a government organization in a developing country. We examine this adoption behavior by utilizing the Unified Theory of Acceptance and Use of Technology (UTAUT) that provides an integrative view of user acceptance. We found that performance and effort expectancy, social influence and facilitating conditions all positively impact the use of the ICT. We did not find a significant moderating effect of gender on these relationships

Our results show that UTAUT is a valid model to understand the adoption and successful use of ICT in government organizations in developing countries. Information systems analysts and designers should design ICT that are easy to use and directly impact individual and organizational performance. Government organizations also need to pay special attention to providing adequate training and support during implementation and use of such systems. Managers need to provide a facilitating environment where employees are encouraged to use new technologies by clarifying expectations and possible impact on employee job description and workload. This study has its limitations. In this research we investigated the adoption of ICT in a government organization. While eGovernment can include a number of technologies and services, our study is restricted to use of Internet and to one setting – government-to-employee (G2E). We do not explore those services in eGovernment that come under the umbrella of government-to-citizen services. We also did not consider the role of other exogenous factors that could impact the behavioral intention to use and actual use of the system. Despite some of these limitations, we believe this study makes a significant contribution to knowledge in the areas of eGovernment and technology acceptance and adds to the understanding of enabling factors in these areas in developing countries. We can identify some areas of future research. Additional research in government and non-government organizations in different developing countries is required to further examine acceptance and use of Internet technologies. Future research can extend our study to other sectors of governments and see if the factors that we found to be significant in our study are important determinants of Internet technology use in other government organizations. Future research can also examine role of ICT in government-to-citizen (G2C), government-to-business (G2B), and government-to-government (G2G) environments.