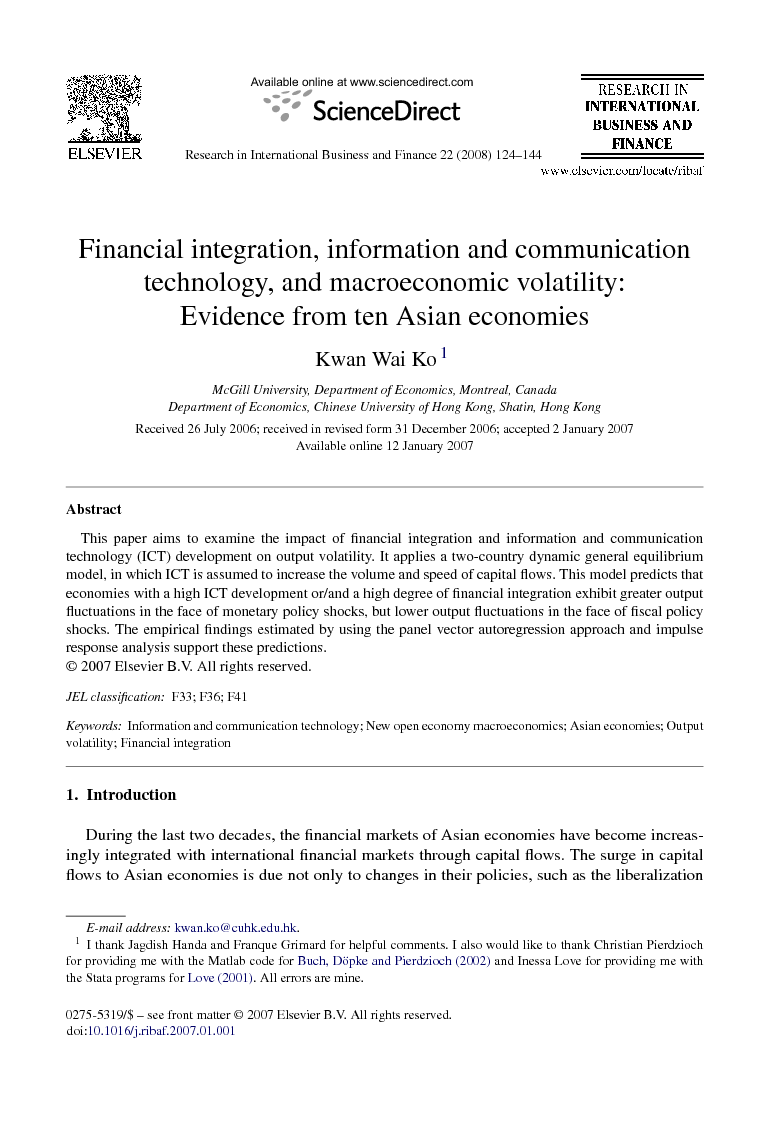 This paper aims to examine the impact of financial integration and information and communication technology (ICT) development on output volatility. It applies a two-country dynamic general equilibrium model, in which ICT is assumed to increase the volume and speed of capital flows. This model predicts that economies with a high ICT development or/and a high degree of financial integration exhibit greater output fluctuations in the face of monetary policy shocks, but lower output fluctuations in the face of fiscal policy shocks. The empirical findings estimated by using the panel vector autoregression approach and impulse response analysis support these predictions.

During the last two decades, the financial markets of Asian economies have become increasingly integrated with international financial markets through capital flows. The surge in capital flows to Asian economies is due not only to changes in their policies, such as the liberalization of these flows and opening up of stock markets, but also to the developments in information and communication technology (ICT). In the present study, financial integration refers to cross-border capital flows, and output volatility refers to short-term output fluctuations. As shown in Fig. 1, gross foreign direct investment (FDI) flows increase for 10 Asian economies – China, Hong Kong, India, Korea, Malaysia, Pakistan, the Philippines, Singapore, Taiwan, and Thailand – from 1980 to 2000. This trend is accompanied by an increase in trade in telecommunication equipment or telecommunication investment, both of which reflect an advance in ICT. Within the same period, the average annual growth rate of gross FDI flows, trade in telecommunication equipment and telecommunication investment are 19, 17, and 16%, respectively.This question is important for three reasons. First, financial liberalization is widely believed to be an underlying source of the banking and currency crises in the 1990s (i.e., Stiglitz, 2002, p. 99). It follows that financial integration is expected to increase short-term output fluctuations. Recent empirical studies, such as Easterly et al. (2001), Buch et al. (2002), and Bekaert et al. (2004), do not find a statistically significant link of this relationship, whereas O’Donnell (as cited in Kose et al., 2003b) finds that a higher degree of financial integration is associated with lower (higher) output volatility in OECD (non-OECD) countries. However, the empirical evidence of the impact of financial integration on macroeconomic volatility is rather sparse and inconclusive, as noted in Kose et al. (2003b). Second, many authors, such as Eichengreen et al. (1998) and Dailami and ul Haque (1999) acknowledge the extraordinary effect of ICT on the volume of international financial transactions. With ICT, financial institutions not only expand their financial services worldwide, but also provide them at low costs. Claessens et al. (2002) point out that many new trading systems and electronic communication networks have been set up in industrial and emerging markets, allowing global securities trading. The costs of delivering bank services are further reduced through the use of online transactions, and the costs of online brokerage are just 25% of traditional costs. Despite the important role of ICT development in financial integration, studies related to this topic are limited. Third, policymakers are concerned with the benefits and the risks of financial integration, since it brings potentially large gains such as portfolio risk diversification, consumption smoothing through borrowing, and economic growth through improving the efficiency of financial intermediaries. Potentially significant costs exist as well, in particular, macroeconomic instability, which is detrimental to economic growth (Ramey and Ramey, 1995) and human capital accumulation (Easterly et al., 2001). The objective of this paper is to study the combined impact of ICT development and financial integration on output volatility in the sample of 10 Asian economies from 1980 to 2003. This study contributes to recent studies on the linkage between financial integration and output volatility in two aspects. First, it highlights the role of ICT development in enhancing financial integration. This paper adopts Sutherland's (1996) theoretical model, in which an advance in ICT implies a decline in transaction costs for trading foreign bonds, and thus a greater degree of financial integration. Also, this paper is the only empirical study to have examined the combined effects of ICT development and financial integration on output volatility. The second way this study contributes to recent studies on the linkage between financial integration and output volatility is to highlight the effects of policy shocks on output volatility, as in Buch et al. (2002). Unlike Buch et al. (2002) who use Granger causality test and panel regression, this study employs panel vector autoregression (PVAR) approach and impulse response analysis. In sum, at the theoretical level, this study extends Sutherland's (1996) two-country dynamic general equilibrium model by introducing physical capital into the production function and budget constraint. However, these modifications do not affect Sutherland's (1996) predictions that increasing financial market integration tends to increase output volatility in the case of a monetary shock, and decrease output volatility in the case of a government spending shock. Further, ICT is assumed to promote the volume and speed of capital flows in this study's model. Empirically, this study provides evidence that economies with high (low) ICT development exhibit higher (lower) output fluctuations in the face of a monetary shock and lower (higher) output fluctuations in the face of a fiscal shock. This paper is organized as follows. This section reviews selected theoretical and empirical studies that are related to this study. Section 2 presents the two-country dynamic general equilibrium model and the simulation results. Section 3 discusses the data and the estimation results. Section 4 concludes. This paper draws heavily on Ko (2006).

This study applies a two-country dynamic general equilibrium model, in which an advance in ICT or the financial liberalization lowers the transaction costs of trading international financial assets and so promotes capital flows. This model predicts that financial market integration tends to magnify or dampen output volatility depending on the nature of policy shocks. The panel VAR evidence reported in Table 3 supports this model's predictions, suggesting that the group of economies with an advanced ICT or/and the financial liberalization experience higher output volatility in the face of a monetary policy shock, and lower output volatility in the face of a fiscal policy shock. For robustness checks, the ICT index is explicitly introduced into the regression model. The finding of the combined impact of ICT and monetary shocks on output volatility [column (4) of Table 4] is robust, while the interaction term between ICT and fiscal shocks [column (6) of Table 4] does not have the expected negative sign, but statistically insignificant. The latter result weakly supports the simulation finding [panel (a) of Fig. 3], which suggests a very small difference in output volatility between more and less financially integrated economies in the case of a government spending shock. Moreover, the findings reported in Table 3 and Table 4 confirm the results of Buch et al. (2002) who suggest that policy shocks are relevant in determining the relationship between financial integration and output volatility, even though the present study differs from theirs in terms of explanatory variables, sample countries, sample periods, and estimation methodology. The present study's analysis, which includes ICT, extends the work of Buch et al. (2002), and Kose et al. (2003a) who report that the direct effect of financial openness on output volatility is positive but statistically insignificant. Our finding shows that the effect of financial openness on output volatility depends on ICT development. As shown in column 2 of Table 4, the positive effect of financial openness on output volatility is associated with high ICT development. A more detailed examination in the future research is deserved to assess the robustness of this result. In sum, the theoretical and empirical results of this study have two policy implications. First, for those countries which adjust their monetary policy actively, their short-term output fluctuation would be exacerbated by the high financial integration [Table 3 and columns (4) and (5) of Table 4]. Second, the findings in columns (4) and (5) of Table 4 suggest that the financial liberalization and an advance in ICT have similar impacts on output. These findings, together with the results in column (2) of Table 4, imply that an advance in ICT could render capital control less effective.