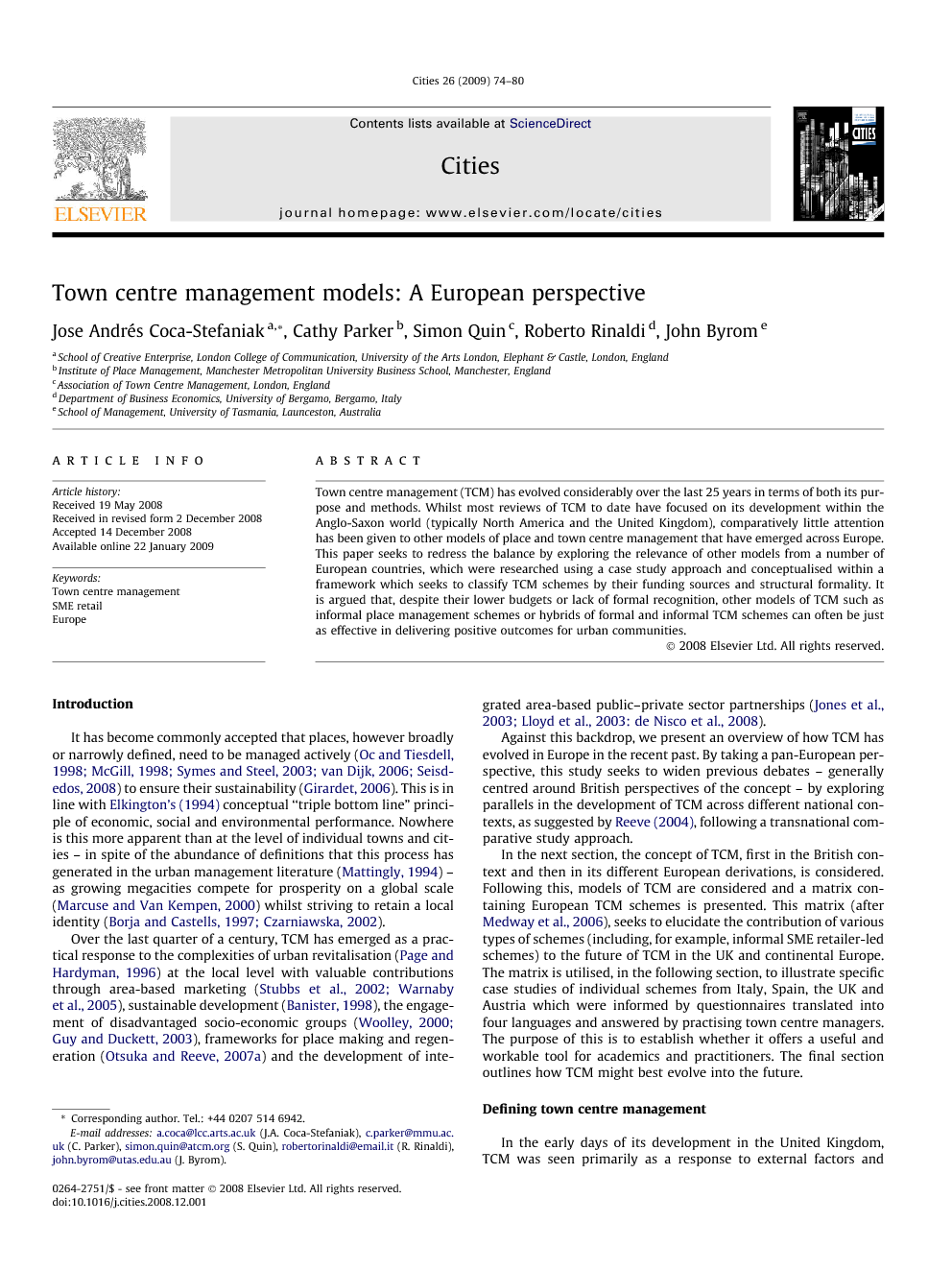 Town centre management (TCM) has evolved considerably over the last 25 years in terms of both its purpose and methods. Whilst most reviews of TCM to date have focused on its development within the Anglo-Saxon world (typically North America and the United Kingdom), comparatively little attention has been given to other models of place and town centre management that have emerged across Europe. This paper seeks to redress the balance by exploring the relevance of other models from a number of European countries, which were researched using a case study approach and conceptualised within a framework which seeks to classify TCM schemes by their funding sources and structural formality. It is argued that, despite their lower budgets or lack of formal recognition, other models of TCM such as informal place management schemes or hybrids of formal and informal TCM schemes can often be just as effective in delivering positive outcomes for urban communities.

It has become commonly accepted that places, however broadly or narrowly defined, need to be managed actively (Oc and Tiesdell, 1998, McGill, 1998, Symes and Steel, 2003, van Dijk, 2006 and Seisdedos, 2008) to ensure their sustainability (Girardet, 2006). This is in line with Elkington’s (1994) conceptual “triple bottom line” principle of economic, social and environmental performance. Nowhere is this more apparent than at the level of individual towns and cities – in spite of the abundance of definitions that this process has generated in the urban management literature (Mattingly, 1994) – as growing megacities compete for prosperity on a global scale (Marcuse and Van Kempen, 2000) whilst striving to retain a local identity (Borja and Castells, 1997 and Czarniawska, 2002). Over the last quarter of a century, TCM has emerged as a practical response to the complexities of urban revitalisation (Page and Hardyman, 1996) at the local level with valuable contributions through area-based marketing (Stubbs et al., 2002 and Warnaby et al., 2005), sustainable development (Banister, 1998), the engagement of disadvantaged socio-economic groups (Woolley, 2000 and Guy and Duckett, 2003), frameworks for place making and regeneration (Otsuka and Reeve, 2007a) and the development of integrated area-based public–private sector partnerships (Jones et al., 2003, Lloyd et al., 2003 and de Nisco et al., 2008). Against this backdrop, we present an overview of how TCM has evolved in Europe in the recent past. By taking a pan-European perspective, this study seeks to widen previous debates – generally centred around British perspectives of the concept – by exploring parallels in the development of TCM across different national contexts, as suggested by Reeve (2004), following a transnational comparative study approach. In the next section, the concept of TCM, first in the British context and then in its different European derivations, is considered. Following this, models of TCM are considered and a matrix containing European TCM schemes is presented. This matrix (after Medway et al., 2006), seeks to elucidate the contribution of various types of schemes (including, for example, informal SME retailer-led schemes) to the future of TCM in the UK and continental Europe. The matrix is utilised, in the following section, to illustrate specific case studies of individual schemes from Italy, Spain, the UK and Austria which were informed by questionnaires translated into four languages and answered by practising town centre managers. The purpose of this is to establish whether it offers a useful and workable tool for academics and practitioners. The final section outlines how TCM might best evolve into the future.