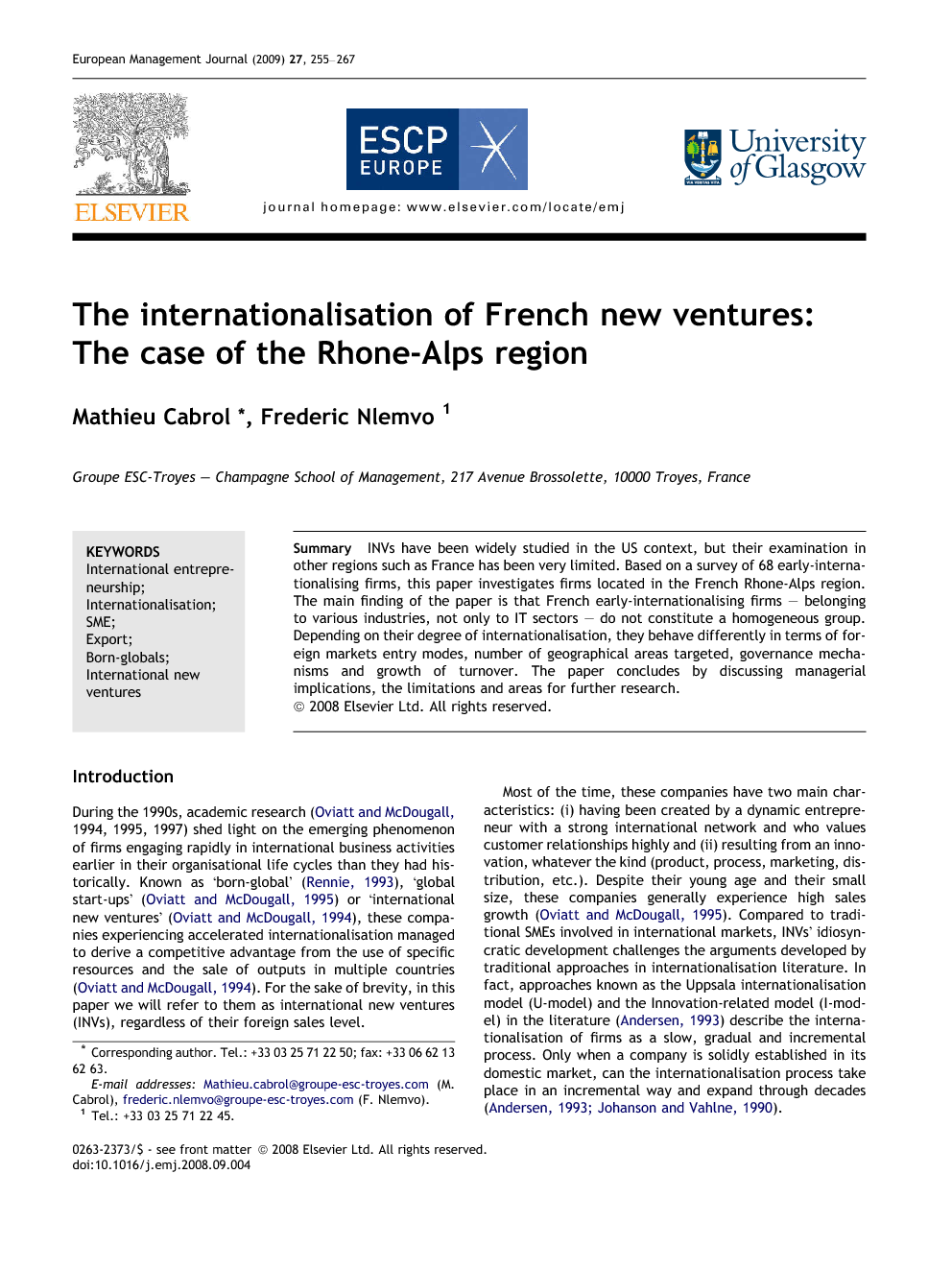 INVs have been widely studied in the US context, but their examination in other regions such as France has been very limited. Based on a survey of 68 early-internationalising firms, this paper investigates firms located in the French Rhone-Alps region. The main finding of the paper is that French early-internationalising firms – belonging to various industries, not only to IT sectors – do not constitute a homogeneous group. Depending on their degree of internationalisation, they behave differently in terms of foreign markets entry modes, number of geographical areas targeted, governance mechanisms and growth of turnover. The paper concludes by discussing managerial implications, the limitations and areas for further research.

During the 1990s, academic research (Oviatt and McDougall, 1994, Oviatt and McDougall, 1995 and Oviatt and McDougall, 1997) shed light on the emerging phenomenon of firms engaging rapidly in international business activities earlier in their organisational life cycles than they had historically. Known as ‘born-global’ (Rennie, 1993), ‘global start-ups’ (Oviatt and McDougall, 1995) or ‘international new ventures’ (Oviatt and McDougall, 1994), these companies experiencing accelerated internationalisation managed to derive a competitive advantage from the use of specific resources and the sale of outputs in multiple countries (Oviatt and McDougall, 1994). For the sake of brevity, in this paper we will refer to them as international new ventures (INVs), regardless of their foreign sales level. Most of the time, these companies have two main characteristics: (i) having been created by a dynamic entrepreneur with a strong international network and who values customer relationships highly and (ii) resulting from an innovation, whatever the kind (product, process, marketing, distribution, etc.). Despite their young age and their small size, these companies generally experience high sales growth (Oviatt and McDougall, 1995). Compared to traditional SMEs involved in international markets, INVs’ idiosyncratic development challenges the arguments developed by traditional approaches in internationalisation literature. In fact, approaches known as the Uppsala internationalisation model (U-model) and the Innovation-related model (I-model) in the literature (Andersen, 1993) describe the internationalisation of firms as a slow, gradual and incremental process. Only when a company is solidly established in its domestic market, can the internationalisation process take place in an incremental way and expand through decades (Andersen, 1993 and Johanson and Vahlne, 1990). While INVs have been subject to extensive research in the Anglo-Saxon context, such studies devoted to the French context are rare2 (e.g. Moen, 2002 and Moen and Servais, 2002). This may be partly explained by the fact that data available on French exports make the identification of INVs hard (Mesure and Klappers, 2008). The objective of this exploratory research is to study early internationalisation of a sample of 68 French companies extracted from a population of 2274 firms, all registered in the Rhone-Alps region, the second largest economic region in France after Paris.3 The analyses conducted focused on industrial firms created ex-nihilo and that developed international sales soon after they were founded, that is less than six years. In so doing, the challenge is to analyse the internationalisation of new ventures more deeply and thus to highlight the main characteristics and behaviour of such firms in France. When appropriate, we also compare their development process to that described in the literature, namely by the Uppsala School (Johanson and Vahlne, 1977 and Johanson and Vahlne, 1990) and various export models. In summary, we will examine two research questions: (i) What are the main characteristics of French early-internationalising firms?4; (ii) Do they constitute a homogeneous group? To address these questions, the paper is structured as follows. The first section is a literature review focused on different approaches of the internationalisation process while in the second we introduce the methodology adopted. In the third section, we present the results of statistical analyses based on an exploratory survey conducted in 2003. In the last section, we discuss the results and managerial implications of our findings, as well as the limitations of the paper, before suggesting some avenues for future research.

The purpose of this paper was to highlight the main characteristics of French early-internationalising firms and to check whether they constitute a homogeneous group. The statistical evidence shows that in the French Rhone-Alps region, a large number of companies proactively choose to have international sales early in their lives. These INVs belong not only to ICT sectors but also to a large number of industries. This result is consistent with Oviatt and McDougall (1994) according to whom ‘international new ventures may appear in a wide range of industries’. In fact, INVs can be found in various industries even non technological such as management services (Oviatt and McDougall, 1995) or manufacturing (Rennie, 1993). One potential managerial implication is that executive education as well as any programme devoted to potential entrepreneurs should develop the audience’s awareness on the relevance of considering early internationalisation of activities while screening opportunities for new ventures. In fact, for some kinds of products or services, persisting in dealing only in the domestic market initially, before tackling foreign markets may be a misleading strategy and a potential cause of failure. The prevailing model of companies surveyed consists of an entrepreneur creating a new venture with the pre-existing idea of going international. Generally, they start their first international activities on their own initiative and direct their companies towards foreign markets immediately and they personally head the international activities, regardless of the existence of a dedicated department. While ‘direct export and/or the use of agent’ is the dominant entry mode whatever the level of internationalisation, the most internationalised firms – who are also the earliest in starting the process of internationalisation – recorded the highest figures in turnover, the number of employees, the number of areas reached and the use of complex entry modes. The empirical evidence also revealed that the first steps of the internationalisation of new ventures challenge the process theory of internationalisation, since their international activity is concomitant to their domestic activity. This behaviour may be explained by the fact that the majority of founders of French early-internationalising firms surveyed had the idea of internationalisation before the inception of the company. Another finding concerns the non-homogeneity of French INVs surveyed, depending on their degree of internationalisation. Our study conveys some managerial implications. One managerial implication may be that more involvement in internationalisation is a route for growth, so nascent growth oriented companies might consider expanding their activities abroad much earlier. In that respect, the industry they are active in should not deter them, since INVs appear in various industries, not only in high-tech sectors. Another lesson is that the most internationalised firms are also those targeting a great number of geographical areas. Thus, those companies wishing to grow rapidly might consider not restricting their activities to neighbouring EU countries but also areas further away, given they have conducted relevant office and field market research. The main contribution of the study to the existing literature is twofold. First, it provides the empirical evidence necessary to address the question of whether early-internationalising firms can be considered as a homogeneous group. In addition, there is very limited research on INVs in the French context. This paper has tried to fill the gap, even if only Rhone-Alps region firms were analysed. Second, the results suggest, on the one hand, that a higher level of international sales comes with a higher turnover, an increase in the number of geographical areas reached and the use of complex entry modes and, on the other hand, that INVs surveyed tend to pursue a strategy of expanding their geographical presence all over the world rather than focusing on particular geographical areas. The main caution in interpreting the aforementioned results is that they probably cannot be generalized to all SMEs in France because we have only analysed INVs in the Rhone-Alps region. However, it is worth mentioning that due to the structure of its economy characterised by a lack of focus on one particular industry and also by the absence of a unique attractive city (there are three main big cities Lyon, Grenoble and Saint-Etienne), the Rhone-Alps region is somewhat representative of the French economic landscape. Moreover, given that the paper has examined a large number of industries, similarities observed may probably be generalized for other French INVs. However, this point needs to be addressed by future research insofar as we did not control for the variable ‘industry’. In that respect, this may include research focused on specific industries such as Autio et al. (2000) in electronics and the one conducted recently by Gassmann and Keup (2007) on the bio-tech industry. As in this paper we focus mainly on sales activities, the study may be deepened for instance by taking into account the internationalisation of the value chain activities as suggested by Oviatt and McDougall (1994). Also, even if INV theory is recent, rapidly and early-internationalising companies have existed for decades (Zahra and George, 2002). Thus, it may be interesting to learn more by studying such firms in the long term. This may bring more insights into INVs, bearing in mind that as the world is increasingly becoming a ‘global village’ INVs will no longer be the exception but the rule, as seems to be the case in France. Much is needed for a better understanding of ‘accelerated internationalisation’ of companies.