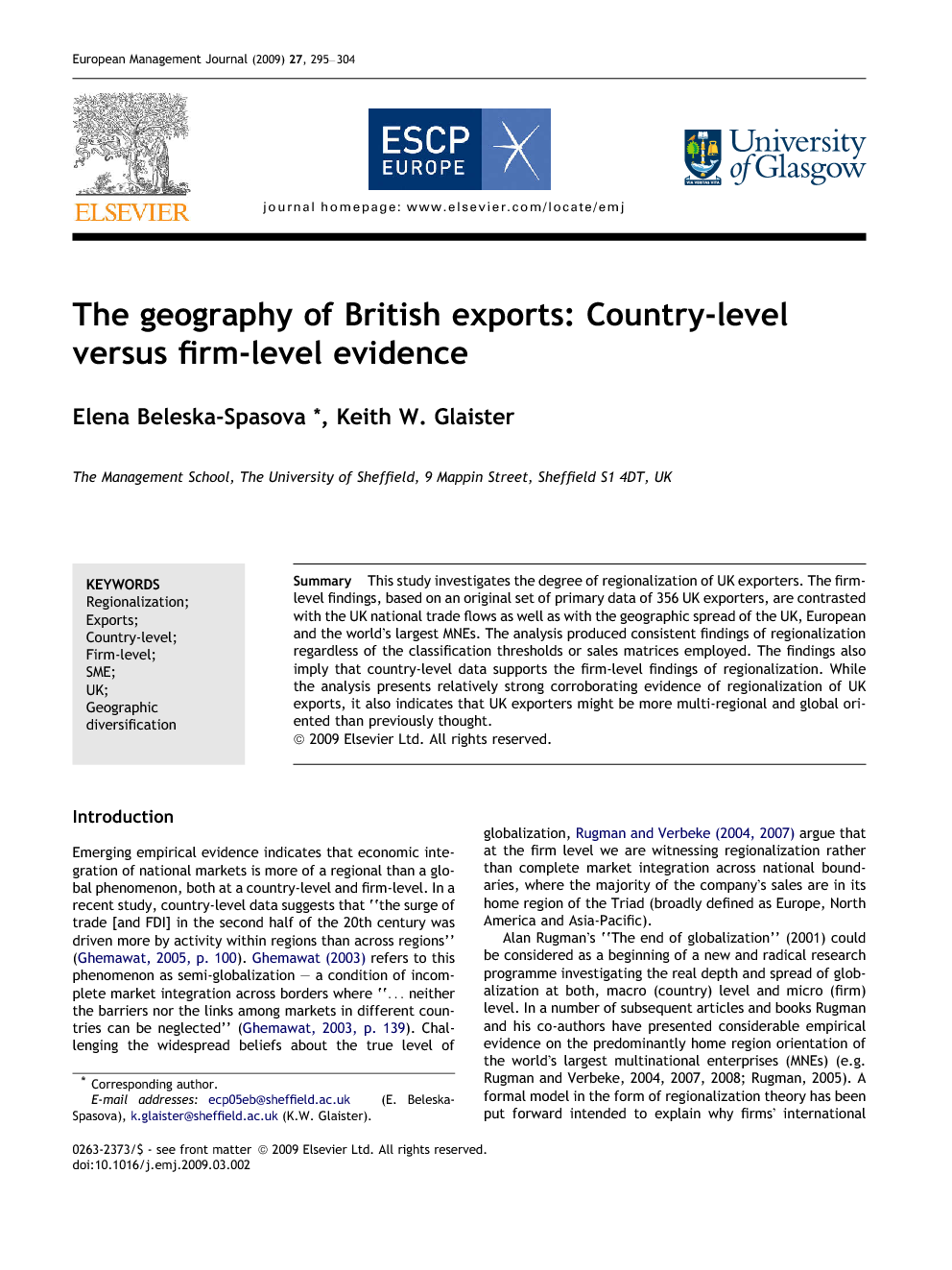 Emerging empirical evidence indicates that economic integration of national markets is more of a regional than a global phenomenon, both at a country-level and firm-level. In a recent study, country-level data suggests that “the surge of trade [and FDI] in the second half of the 20th century was driven more by activity within regions than across regions” (Ghemawat, 2005, p. 100). Ghemawat (2003) refers to this phenomenon as semi-globalization – a condition of incomplete market integration across borders where “… neither the barriers nor the links among markets in different countries can be neglected” (Ghemawat, 2003, p. 139). Challenging the widespread beliefs about the true level of globalization, Rugman and Verbeke, 2004 and Rugman and Verbeke, 2007 argue that at the firm level we are witnessing regionalization rather than complete market integration across national boundaries, where the majority of the company’s sales are in its home region of the Triad (broadly defined as Europe, North America and Asia-Pacific). Alan Rugman’s “The end of globalization” (2001) could be considered as a beginning of a new and radical research programme investigating the real depth and spread of globalization at both, macro (country) level and micro (firm) level. In a number of subsequent articles and books Rugman and his co-authors have presented considerable empirical evidence on the predominantly home region orientation of the world’s largest multinational enterprises (MNEs) (e.g. Rugman and Verbeke, 2004, Rugman and Verbeke, 2007, Rugman and Verbeke, 2008 and Rugman, 2005). A formal model in the form of regionalization theory has been put forward intended to explain why firms’ international activities are significantly constrained to the home region. The essence of Rugman and Verbeke’s regionalization theory is that the evident inability of the MNEs to deploy and exploit their firm-specific advantages (FSAs), even the non-location bound, indiscriminately across the world is due to the (home-)region boundedness of FSAs – i.e. the highly restricted transferability and acceptability of the firm’s FSAs beyond the home region ( Rugman and Verbeke, 2004). The restricted transferability and acceptance of FSAs beyond the home region is explained by the significant difference in expansion costs: “the liability of intra-regional expansion appears to be much lower than the liability of inter-regional expansion” ( Rugman and Verbeke, 2007, p. 201, original emphasis). It is argued that the higher liability of inter-regional expansion stems from the higher costs of product/service adaptation to host region markets (especially at the downstream side of the value chain), management constraints in managing operations in host regions (incremental costs associated with cultural, administrative, geographic and economic differences), and costs associated with higher risk due to significant (one-sided) resource commitment in the host region (especially in the case of downstream FDIs). In light of these recent regionalization debates, this study is intended to make an empirical contribution by investigating the degree of regionalization of UK exporters and assessing the extent to which country-level data supports or contradicts the firm-level findings of regionalization. The study makes several novel contributions. First, previous research has focused predominantly on examining the regional nature of the world’s largest MNEs. The decision of MNEs as to where to locate their investments is one of the most extensively researched areas of international business (Aharoni, 1966, Green and Smith, 1972, Dunning, 1980, Nigh, 1985 and Loree and Guisinger, 1995). Even though financial transactions, such as direct and portfolio investments, and international technology transfers have become increasingly important, traditionally international trade in goods and services has been regarded as the principal channel for economic integration. Given this critical role of exporting and the increasingly active role played by small and medium-size enterprises (SMEs) in international markets, the focus of this study is on SMEs engaged primarily in exporting activities. In view of the recent evidence on the predominantly regional nature of the MNEs, the general perception is that the SMEs would have even less internationally diversified operations. By examining a sample of 356 UK exporters we determine the degree of SME regionalization following Rugman and Verbeke’s (2004) classification of regional and global firms. Our analysis indicates that SMEs might be less regional in their geographic orientation than previously thought. Second, the majority of prior empirical findings relating to regionalization are based on analysis of secondary firm-level data, constraining researchers in employing different regionalization concepts and metrics or limiting their focus on a specific region where more detailed data is available making their findings country/region specific and hard to validate. Hejazi (2007), for example, examines the global, regional and national concentration of US MNE activity and reports inability to obtain such data on MNE activity for any of the OECD countries. We bridged this gap by using primary data on 356 UK exporters collected by an electronic survey technique. The primary data enable us to derive and compare different measures of regionalization. Furthermore, we contrast the firm-level data of our sample of UK exporters with the firm-level data from the UK, European and world’s largest MNEs and determine if there are significant differences in the regional orientation between large international companies and the smaller exporting firms. In order to achieve these objectives the paper is organized as follows. We start with an analysis of the regional distribution of UK trade flows. Next, the evidence of the regional nature of UK exports at country level is related to the regional scope of other country-level empirical evidence. We proceed with firm-level data by analysing the geographic spread of the exports of a sample of 356 UK exporters over the broad Triad regions of Europe, North America and Asia-Pacific and contrast these findings with the geographic dispersion of international activities of the UK, European and world’s largest MNEs. We further relate the regional nature of the UK exporters in the sample to their organizational characteristics. Conclusions and implications conclude the paper.

This study provides a contribution to the growing body of regionalization research in four areas: (i) the country-level data support for the firm-level findings of regionalization, (ii) the debate on the regional versus global nature of international firms, (iii) the use of different classification thresholds and sales matrices in assessing the firm’s degree of regionalization, and (iv) the focus on the smaller international firms. The analysis of the intra-regional sales of the countries in the broad Triad regions of Europe, North America and Asia-Pacific and the rest of the world, provide clear evidence of the high degree of regionalization of the trade flows worldwide. The study’s findings also present relatively strong corroborating evidence of regionalization at firm-level. The UK exporters in our sample appear to be more regional than global, with intra-regional sales accounting for over 75% of their total foreign sales, supporting the view of the (home) regional boundness of FSAs. When compared to the UK, European and the world’s largest MNEs, our findings imply that smaller international firms are relatively less regional and more multi-regional and global. We have also provided evidence that the firm’s size, industry sector and international experience have a deterministic role in the degree of the geographic spread of the firm’s operations. The comparative analysis based on the R/T versus F/T sales ratios together with three other sales matrices: domestic market sales (HOME), rest of the home region sales (ROR) and rest of the world (ROW), produced the following observations. First, there is clear empirical evidence of the predominant home region orientation across all four samples of international firms (UK exporters, and UK, European and the world’s largest MNEs) regardless of whether the R/T or F/T ratios are employed. Second, the analysis shows that the regional concentration at firm level is driven by the national dimension of the firm’s sales activities, i.e. the national dimension figures (HOME) are considerably higher than the rest of the home region figures (ROR). The degree of national and home region concentration is an indication of the transferability and deployability of the FSAs and the firm’s ability to overcome the liability of inter-regional foreignness, implying that regional/global strategy decisions cannot be made in isolation and separate from the national strategy. This study also contributes to the regionalization debate by focusing on the smaller international firms – i.e. exporters. The initial findings show that the regional nature of the smaller international firms does indeed differ from the larger MNEs, indicating a need for further investigation into the potential causes and implications of these differences. There are several caveats associated with this study. The study investigates the regional nature of UK exporting firms, and the findings may not be generisable due to country specific effects. Sample heterogeneity in terms of industry mix, while beneficial to a degree, impedes the analysis from taking into account industry specifics. Also, the perception of what constitutes a home or host region may differ among the international firms, as well as the perception of distance. The main contribution of this study is in exploring the exporting (spread) strategy of UK exporters. The findings imply that 80% of the surveyed UK exporters are single-region focused, either home (49%) or host (31%) region oriented, and generate over 70% of their foreign revenues in a single region of the Triad. The predominantly single-region orientation entails a clear need for a supporting regional strategy and organisational structure. Further investigation is required in order to determine whether this single-region orientation is actually the result of a well-defined and deliberate regional strategy or the product of an ad hoc and emergent strategy process. While the firms in the sample of UK exporters are predominantly regional in their geographic spread, they might be more multi-regional and global oriented than previously thought. It would be fruitful to investigate further whether this study’s findings are due to country-or region-specific effects by conducting similar studies in other countries. The considerable host region orientation among exporters is another area that warrants further investigation.