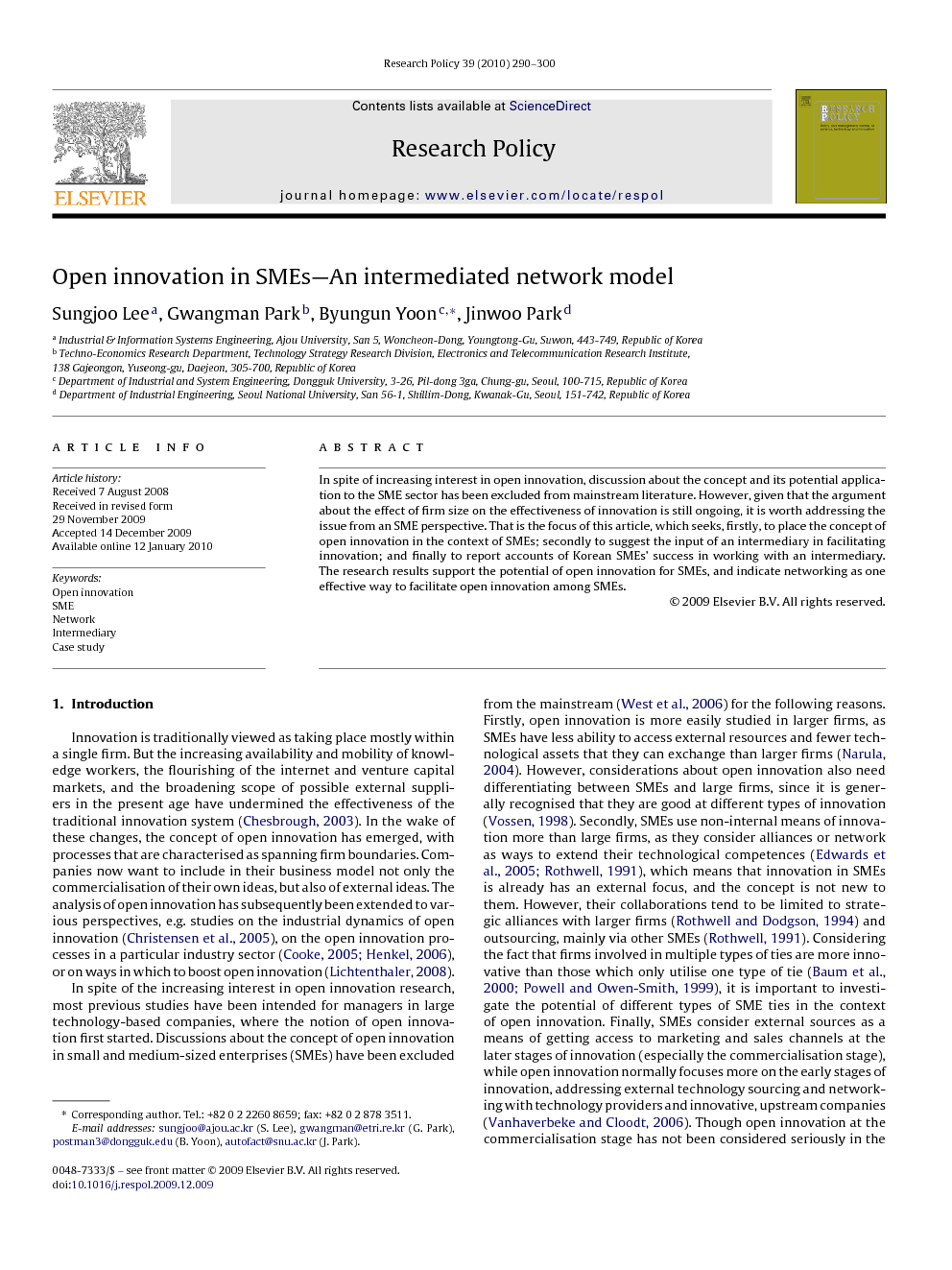 In spite of increasing interest in open innovation, discussion about the concept and its potential application to the SME sector has been excluded from mainstream literature. However, given that the argument about the effect of firm size on the effectiveness of innovation is still ongoing, it is worth addressing the issue from an SME perspective. That is the focus of this article, which seeks, firstly, to place the concept of open innovation in the context of SMEs; secondly to suggest the input of an intermediary in facilitating innovation; and finally to report accounts of Korean SMEs’ success in working with an intermediary. The research results support the potential of open innovation for SMEs, and indicate networking as one effective way to facilitate open innovation among SMEs.

Innovation is traditionally viewed as taking place mostly within a single firm. But the increasing availability and mobility of knowledge workers, the flourishing of the internet and venture capital markets, and the broadening scope of possible external suppliers in the present age have undermined the effectiveness of the traditional innovation system (Chesbrough, 2003). In the wake of these changes, the concept of open innovation has emerged, with processes that are characterised as spanning firm boundaries. Companies now want to include in their business model not only the commercialisation of their own ideas, but also of external ideas. The analysis of open innovation has subsequently been extended to various perspectives, e.g. studies on the industrial dynamics of open innovation (Christensen et al., 2005), on the open innovation processes in a particular industry sector (Cooke, 2005 and Henkel, 2006), or on ways in which to boost open innovation (Lichtenthaler, 2008). In spite of the increasing interest in open innovation research, most previous studies have been intended for managers in large technology-based companies, where the notion of open innovation first started. Discussions about the concept of open innovation in small and medium-sized enterprises (SMEs) have been excluded from the mainstream (West et al., 2006) for the following reasons. Firstly, open innovation is more easily studied in larger firms, as SMEs have less ability to access external resources and fewer technological assets that they can exchange than larger firms (Narula, 2004). However, considerations about open innovation also need differentiating between SMEs and large firms, since it is generally recognised that they are good at different types of innovation (Vossen, 1998). Secondly, SMEs use non-internal means of innovation more than large firms, as they consider alliances or network as ways to extend their technological competences (Edwards et al., 2005 and Rothwell, 1991), which means that innovation in SMEs is already has an external focus, and the concept is not new to them. However, their collaborations tend to be limited to strategic alliances with larger firms (Rothwell and Dodgson, 1994) and outsourcing, mainly via other SMEs (Rothwell, 1991). Considering the fact that firms involved in multiple types of ties are more innovative than those which only utilise one type of tie (Baum et al., 2000 and Powell and Owen-Smith, 1999), it is important to investigate the potential of different types of SME ties in the context of open innovation. Finally, SMEs consider external sources as a means of getting access to marketing and sales channels at the later stages of innovation (especially the commercialisation stage), while open innovation normally focuses more on the early stages of innovation, addressing external technology sourcing and networking with technology providers and innovative, upstream companies (Vanhaverbeke and Cloodt, 2006). Though open innovation at the commercialisation stage has not been considered seriously in the existing literature, it can be an important topic, since economic values of innovation at the commercialisation stage are to a large extent towards other downstream players. While the argument on the effect of firm size on the effectiveness of innovation is still ongoing, it is worth addressing the particularities of open innovation from the perspective of SMEs which are nevertheless major actors in innovation (Maula et al., 2006). This article therefore focuses on open innovation strategies in SMEs, firstly seeking to place the concept of open innovation in the context of SME, and secondly to encourage innovation by suggesting a network model that emphasises the role of intermediaries in linking SMEs. Finally, it introduces some stories of open innovation success in Korean SMEs that have flowed from the intermediary activities of the Korean Integrated Contract Manufacturing Service (KICMS), which was established to facilitate innovation in Korean SMEs. The research results support the notion of open innovation in SMEs, by proposing intermediation as one way of facilitating this strategy, and by suggesting an intermediated network as an effective model to enable their collaboration and specialisation. The rest of this paper consists of four parts. The following section briefly reviews the characteristics of innovation in SMEs, while Section 3 discusses how those characteristics can be reflected and facilitated by proposing an open innovation model for SMEs. To verify this discussion, open innovation efforts among Korean SMEs are introduced in Section 4. For this purpose, we analysed the report, Korea's Technology Innovation completed in 2005 and published by the Survey Science and Technology Policy Institute (STEPI) to understand the nature of innovation activities in Korean SMEs, and conducted a case study of KICMS activities. The final section presents some conclusions and notes on limitations.

At the stage that a movement from a relatively closed business model to a very open one has posed challenges for SMEs, it is important to address their innovatory capabilities in the context of open innovation. This paper attempts to identify the potential of open innovation for SMEs, and to develop collaboration models to enhance this potential. These models are classified into several modes, according to the actors in the models, and each actor's role is defined. On the premise that commercialisation after invention is essential for innovation, and that SMEs are good at inventions but lack adequate resources for commercialisation, we suggest that one possibility to boost open innovation in SMEs lies in collaboration with other firms at the commercialisation stage. Of various collaboration modes, an intermediated network model is investigated, which reflects the open innovation concept, and the role of an intermediary in organising the network is examined, which takes account of SMEs’ limited ability in searching for partners and contributes to building trust between network members. We also analysed technology innovation survey data to understand the current condition of innovation activities among Korean SMEs. From this analysis, we explored the role of external actors in their innovation process, and also identified the barriers to innovation, based on which a network model is suggested and the necessity of an intermediary is highlighted. To verify the feasibility of the model, we introduce the case of KICMS, which was established to support the virtual organisation of Korean SMEs and has encouraged them to establish cross-functional collaborative networks. With the help of KICMS a number of consortiums (called CF2s) have been organised to compete against large firms. KICMS has introduced the collaboration models actively to the SMEs and provided the information that they need together with the basis of trust, helping to organise their collaboration networks effectively. This research supports the concept of open innovation in SMEs by indicating effective networking as one possible way to facilitate their innovation capabilities. Nevertheless, future research is still needed to improve our current understanding of open innovation in SMEs as a whole. Firstly, we have indicated several possibilities of facilitating innovation in SMEs, and then restricted our focus to the collaboration network model. However, other possibilities could be fruitfully examined through a framework encompassing the concept of open innovation and using quantitative data. Secondly, the several terms used to describe this collaboration mode, such as strategic alliance, collaboration, co-operation, networking, etc. – which are used together to point the same or different patterns and thus are quite confusing – need to be clearly defined. Finally, based on the literature review and the KICMS case, this paper tries to define the role of intermediary and more research using survey or interview methods will statistically support the findings of this paper. For example, future research can focus on analysing more CF2 cases in terms of their ratios of success and failure and the factors behind these outcomes, and investigating how to improve the role of intermediary in terms of the matching algorithms and policy support. Also, the future research is needed to find the characteristics of SMEs that are more likely to benefit from collaboration and collaboration via an intermediary in particular.