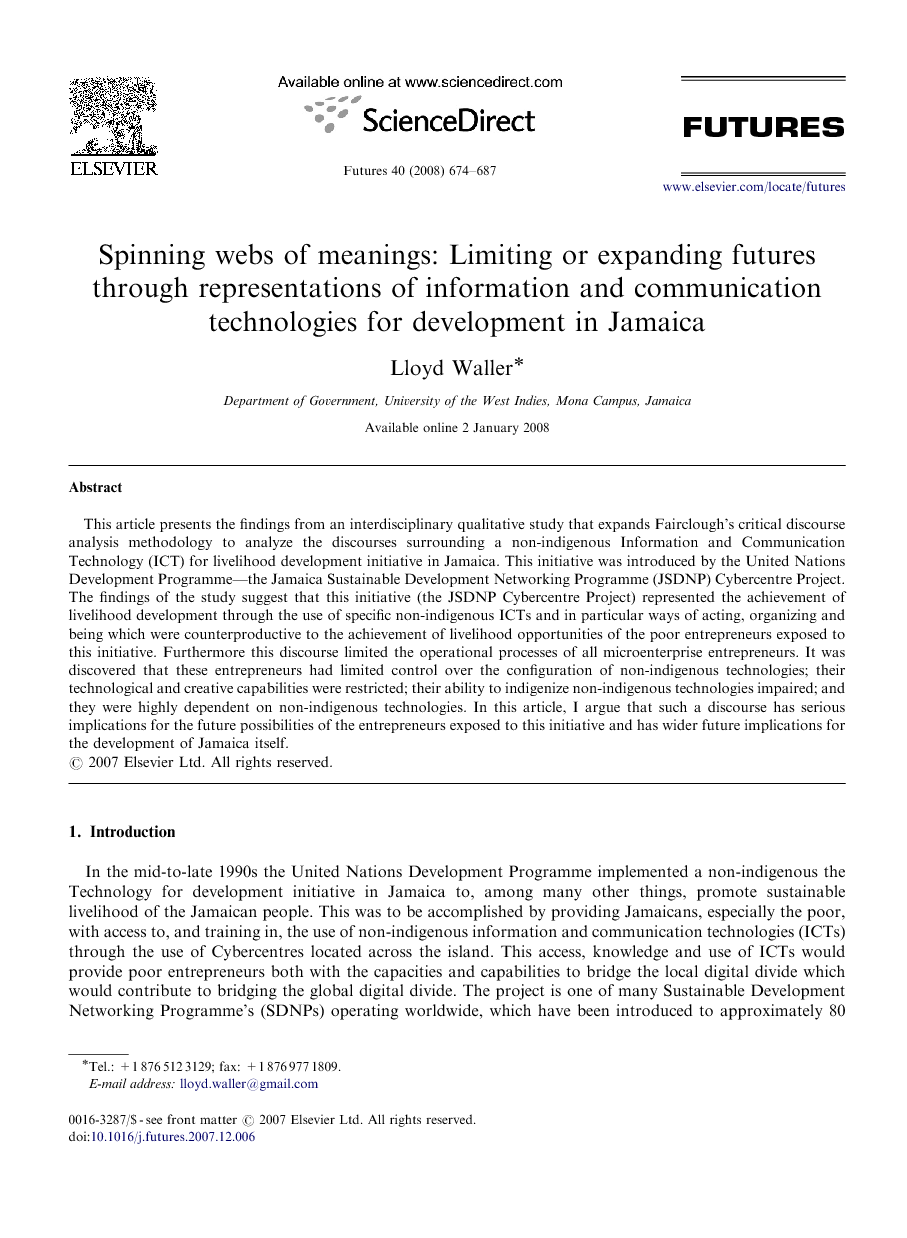 This article presents the findings from an interdisciplinary qualitative study that expands Fairclough's critical discourse analysis methodology to analyze the discourses surrounding a non-indigenous Information and Communication Technology (ICT) for livelihood development initiative in Jamaica. This initiative was introduced by the United Nations Development Programme—the Jamaica Sustainable Development Networking Programme (JSDNP) Cybercentre Project. The findings of the study suggest that this initiative (the JSDNP Cybercentre Project) represented the achievement of livelihood development through the use of specific non-indigenous ICTs and in particular ways of acting, organizing and being which were counterproductive to the achievement of livelihood opportunities of the poor entrepreneurs exposed to this initiative. Furthermore this discourse limited the operational processes of all microenterprise entrepreneurs. It was discovered that these entrepreneurs had limited control over the configuration of non-indigenous technologies; their technological and creative capabilities were restricted; their ability to indigenize non-indigenous technologies impaired; and they were highly dependent on non-indigenous technologies. In this article, I argue that such a discourse has serious implications for the future possibilities of the entrepreneurs exposed to this initiative and has wider future implications for the development of Jamaica itself.

In the mid-to-late 1990s the United Nations Development Programme implemented a non-indigenous the Technology for development initiative in Jamaica to, among many other things, promote sustainable livelihood of the Jamaican people. This was to be accomplished by providing Jamaicans, especially the poor, with access to, and training in, the use of non-indigenous information and communication technologies (ICTs) through the use of Cybercentres located across the island. This access, knowledge and use of ICTs would provide poor entrepreneurs both with the capacities and capabilities to bridge the local digital divide which would contribute to bridging the global digital divide. The project is one of many Sustainable Development Networking Programme's (SDNPs) operating worldwide, which have been introduced to approximately 80 developing countries as a sustainable livelihood expansion model to contribute to the expansion of the future possibilities of the poor in these countries, and is believed to be a development exemplar for ‘the Rest’. For the most part, this development project has been uncritically received by the government, academia, corporate Jamaica and civil society in the developing world. Based on their strategies of inculcation, embracement, romanticism, ‘normative-speak’ and in some instances ‘silent-speak’, this project is perceived, fundamentally and enduringly, so it would seem, as a development opportunity—a development Panacea. From a global perspective, these ways of acting, organizing and being are certainly not an uncommon phenomenon as they are representative of the dominant ICT for development discourse around the world today. However from a local perspective, the perspective of the other, I problemize this discourse. This problematic comes from my own knowledge of Jamaica's history with such technology-for-development projects as well as the current concerns of many skeptics regarding the global ICT for development project, both of which, as is illustrated in the two paragraphs below, may have implications for the possible future of Jamaica. Jamaica's history with previous technology-for-development projects and policies especially those based on non-indigenous technologies, have, for the most part, promoted widespread inequality, poverty and unemployment for many [1], [2], [3], [4], [5], [6], [7] and [8]. In addition to this, these projects and policies, have also contributed to the country's state of technological underdevelopment (in terms of skills and innovation), technological dependency (being dependent on Western Technologies for development) and technological dysfunctionality (the in ability to appropriately utilize and apply technologies for the purposes of development) [1], [5] and [6]. Such a situation has been identified as one of the problems, which have contributed to the overall underdevelopment or relatively slow development of Jamaica. More recently, there have been emerging articulations among scholars in both the, West, [Henceforth used interchangeable with ‘the North’ and ‘the First World’] and the ‘Rest’ [Henceforth used interchangeable with ‘the South’ and ‘the Third or Developing World’] that the current ICT for development project (which has seen the implementation of various initiatives around the world), may in fact be inhibiting the advancement of developing countries generally, and livelihood development for the poor in these countries specifically (see, for example, the works of Luyt, Wade, and Oja [9], [10] and [11]). There has even been claims (albeit from non-empirical research projects and based on anecdotal evidence) that the current ICT for development discourse in its present form (the ways in which ICTs are represented, what is represented, what is not, and who is doing the representations) is problematic. Consequently, many have come to the conclusion that development through an the use of ICT's, may never be a reality for many people in the developing world, especially the poor and disadvantaged [9], [10] and [11]. There has emerged a concern that such initiatives will lead to the widening of the already problematic digital divide. In addition to this, and even more alarming are also claims that in some cases these technologies may even contribute to the very same poverty, inequality and underdevelopment they claim to address. Certainly, given the track record of non-indigenous technologies for development in some developing countries a dismal future may indeed be expected. Given these outcomes, how past events have impacted negatively on Jamaica's present condition and, the possible expected gloomy future expected from present events, some of which are occurring in Jamaica, I argue that there exists a genuine need for a cautiously optimistic approach to this current technology-for-development trend now being regulated by communication consultants and information systems specialists of the West and some spaces of the Rest. I further argue that there is a need to, this time, carefully analyze the possible implications of such initiatives- to be able to better negotiate some form of progressive and stable future. To this end, I attempted to undertake a rigorous qualitative study of one of these initiatives, the JDSNP Cybercentre Project, to ascertain the future possibilities for a handful of microenterprise entrepreneurs operating in the Jamaican tourism sector who have been exposed to the discourses of this initiative. This article reports on the findings of this study.

The current situation is reminiscent of a past when learning how to use other types of technologies such as tractors and communication technologies such as radios were represented as tools which engender a development nirvana—a form of discourse-of-use. This is some 30–40 years ago. Like then, many developing countries in Africa, Latin America and the Caribbean were only shown how to ‘use’ these technologies through several modernization policies. And the promised leapfrog and takeoff which would come from this, never came to fruition. Many developmentalists, however, still remember stories of how other countries in Asia such as Singapore, Japan and Korea had promoted a discourse-of-modification strategy, which played a role in contributing to their current status of ‘Newly-Industrialized Country’. This article is a source of empowerment for those planning ICT for development initiatives—the future of many developing countries. It is hoped that these development planners understand how what may be believed to be simple discourses (representations)—the discourse-of-use vs the discourse-of-modification can affect development outcomes. These are the communication and information systems guru's, many of who know about the complexities of these technologies but have little or no knowledge of development planning and the history of development. It is hoped that this research, this output, will raise their sense of awareness about the complexities of development so that they can make knowledge-based decisions and do not repeat the mistakes of the past while planning for the future.