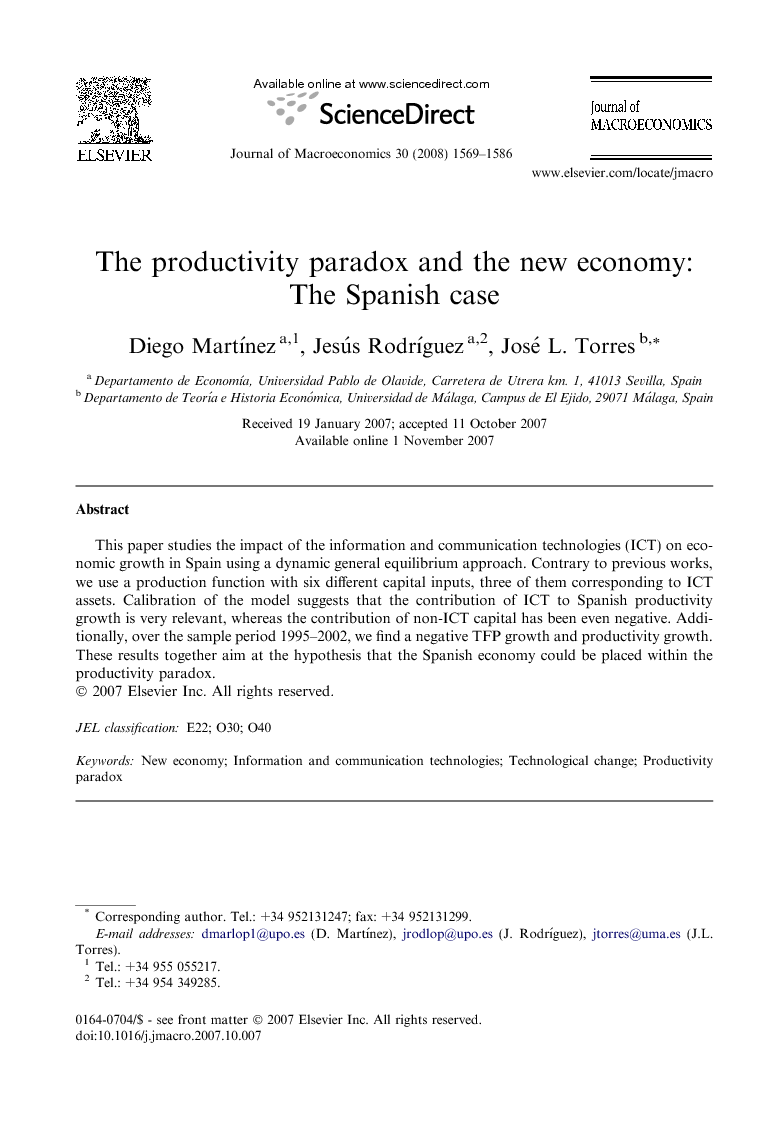 This paper studies the impact of the information and communication technologies (ICT) on economic growth in Spain using a dynamic general equilibrium approach. Contrary to previous works, we use a production function with six different capital inputs, three of them corresponding to ICT assets. Calibration of the model suggests that the contribution of ICT to Spanish productivity growth is very relevant, whereas the contribution of non-ICT capital has been even negative. Additionally, over the sample period 1995–2002, we find a negative TFP growth and productivity growth. These results together aim at the hypothesis that the Spanish economy could be placed within the productivity paradox.

An easy beginning for this paper could highlight the impact of information and communications technologies (ICT) on economic growth. Indeed, the US has experienced a robust acceleration in its productivity growth rate during the 1990s, compared to that of EU. This episode has taken place in a context in which the US investment in ICT has been much higher than that of the EU. Particularly, Jorgenson and Stiroh, 2000 and Jorgenson, 2001 have related the increase in the US productivity growth since the mid-1990s to the growth rate of investment in ICT and the rise in total factor productivity (TFP) growth, mainly in IT production. Oliner and Sichel, 2000 and Baily and Lawrence, 2001 have extended these positive effects to the non-IT production sector of the US economy. By contrast, investment in ICT appears to be less growth-enhancing in a number of countries where the levels of ICT investment are smaller (Colecchia and Schreyer, 2002, Daveri, 2002 and Vijselaar and Albers, 2002). But things are more complex than a first sight might guess. The measured impact of ICT on aggregate productivity has been very limited so far and their effects take long to become visible in the macro-economic aggregates. Even for the successful cases, a number of papers have found that the positive impact of ICT on growth is not so straightforward as expected, but a set of issues appear as necessary conditions to be hold (Wolff, 1996 and Samaniego, 2006). In this regard, the statement by Robert Solow is probably one of the most categorical: “You can see the computer age everywhere these days, except in the productivity statistics” (New York Times Book Review, July 12th 1987). Henceforth, we will refer to the case where investment in ICT does not seem to be reflected in productivity as the productivity (or Solow) paradox. In this context, Spain is an interesting case to be studied. Its high growth rates of output since 1995 (above 3.5% a year as average) contrast to the small contribution of ICT to growth and labor productivity (the smallest within the EU-15). Moreover, this situation is compatible with higher rates of growth in ICT capital assets than in non-ICT capital and a negative growth rate of the TFP. Mas and Quesada (2006) detect that the behavior of ICT intensive sectors in terms of growth rates of output is better as relative to the non-intensive ICT sectors. However, they also find negative TFP growth rates even in the ICT intensive sectors. This paper tries to shed light on the effect of ICT expansion on output and labor productivity growth in Spain. With this aim, we have used a computable dynamic general equilibrium (DGE) model. Papers by Greenwood et al., 1997, Greenwood et al., 2000, Kiley, 2001, Pakko, 2002a and Pakko, 2005 – all of them calibrated to the US economy – Carlaw and Kosempel (2004) for the Canadian economy and Bakhshi and Larsen (2005) for the UK economy, provide examples of this methodology applied to technological changes. To the best of our knowledge, this is the first paper dealing with a DGE model for capturing the impact of ICT on Spanish economy and the first paper calibrating a DGE model with six types of capital and considering the technological change specific to each type of capital. Moreover, regarding the data used in the calibration, we follow the main branch of recent literature of growth accounting and the recommendations of OECD, 2001a and OECD, 2001b; (Mas and Schreyer, 2006), which focus on the concept of capital services, instead of gross or net capital stocks. On the basis of model calibration over the period 1995–2002, our main results show that Spain may be placed in the productivity paradox. Despite the relatively high growth rates of ICT investment, we find a negligible impact on productivity of the traditional capital assets while the ICT capital inputs have a positive influence on productivity. The growth of the TFP has a negative dominant effect on this dynamics. Though striking, these results are consistent with the evidence found by other papers for the US economy (Hornstein and Krusell, 1996, Greenwood and Yorukoglu, 1997, Pakko, 2002a, Pakko, 2002b and Samaniego, 2006) or the Canadian economy (Carlaw and Kosempel, 2004) and highlight the relevance of changes in the organizational capital, training of labor forces and efficiency or markets to capture the full benefits of new technologies. Spain still has a way to walk in the direction of improving these conditions. The paper is organized as follows. Section 2 presents a conventional growth accounting exercise in the EU-15 countries and the US economy, as an attempt to place the Spanish economy in an international and historical perspective. Section 3 presents the theoretical model, in which six types of capital are considered, with the characterization of its balanced growth path. Section 4 shows the calibration exercise. Section 5 presents the results and makes an interpretation using the related literature. Finally, Section 6 concludes.

This paper has tried to shed some light on a difficult issue to be explained: to what extent have the ICT influenced labor productivity and TFP dynamics over the recent years in Spain? This question is a non-trivial one and has been labeled as the productivity paradox. The case of US is the most useful one to illustrate this point. Since the mid of 90s, the US economy has experienced an acceleration in its productivity and TFP growth rates, which many authors attribute to the substantial efforts made in ICT investment. But things have not been always so clear. In fact, during at least a couple of decades, US productivity remained below its long-run value precisely when the “New Economy” revolution began and several organizational challenges had to be faced to adapt the new equipment. Spain is an interesting case to be studied. The dynamics of its productivity has showed a negative pattern since the mid of 90s until now. TFP presents a worse behavior. This has occurred in a context where the investment in ICT assets is increasing at high growth rates. Given these coordinates, the productivity paradox arises as long as the bigger resources devoted to new technologies do not lead to higher growth rates of productivity. In this context, we have carried out a growth accounting exercise in an attempt to make clearer the forces driving the labor productivity growth, particularly those related to ICT inputs. We have built a dynamic general equilibrium model which has been calibrated for the Spanish economy over the period 1995–2002. This approach allows us to gain some insights about the long-run growth pattern which Spain would follow in the case of using the conditions of the late 90s as a starting point towards the steady-state. Hence, our research has to be seen as a tentative exercise aimed at assessing the role played by the ICT in a dynamic context. We provide an alternative framework to study the sources of growth, beyond the conventional growth-accounting exercises, and based on the standard ideas of dynamic equilibrium. In addition, we have defined a production function with six different capital inputs, three of them corresponding to non-ICT inputs (constructions, machinery and transport equipment) whereas the other three correspond to hardware, software and communications equipment. Additionally, we have used series of capital assets based on the concept of capital services, following recent recommendations of OECD. To the best of our knowledge, this paper is the first one which employs this new data methodology in this context. The results provide revealing indications. On the basis of the model calibration over the period 1995–2002, the steady-state of Spanish economy is characterized by a negative productivity growth rate, despite an increasing effort in ICT investment. When the dynamics of productivity is decomposed into implicit and neutral technological progress, the former exerts a positive impact while the latter has a clear negative dominant effect. Behind the small contribution of implicit technological change, we find a modest negative impact coming from the traditional capital inputs, while communications and mainly hardware equipment appear as significant growth-enhancing assets. These results remain even when different subperiods are taken as basis of model calibration. As happened in other past technological revolutions, it seems to be clear that the relevant (but potential) benefits of ICT need time to come true. Adjustments costs and inefficiencies derived from inappropriate qualifications in labor force lead to a transitional dynamics in which productivity suffers low and even negative growth rates. New organizational forms at level-plant and a renewal of labor training and human capital accumulation adapted to the new equipment have to be carried out. Moreover, as the US case shows, the existence of competitive factors, services and goods markets also appears as a necessary condition for the optimal development of ICT because this environment minimizes the adjustments costs. Precisely, the experiences of other countries can make easier and less time-consuming the adoption of ICT in Spain.