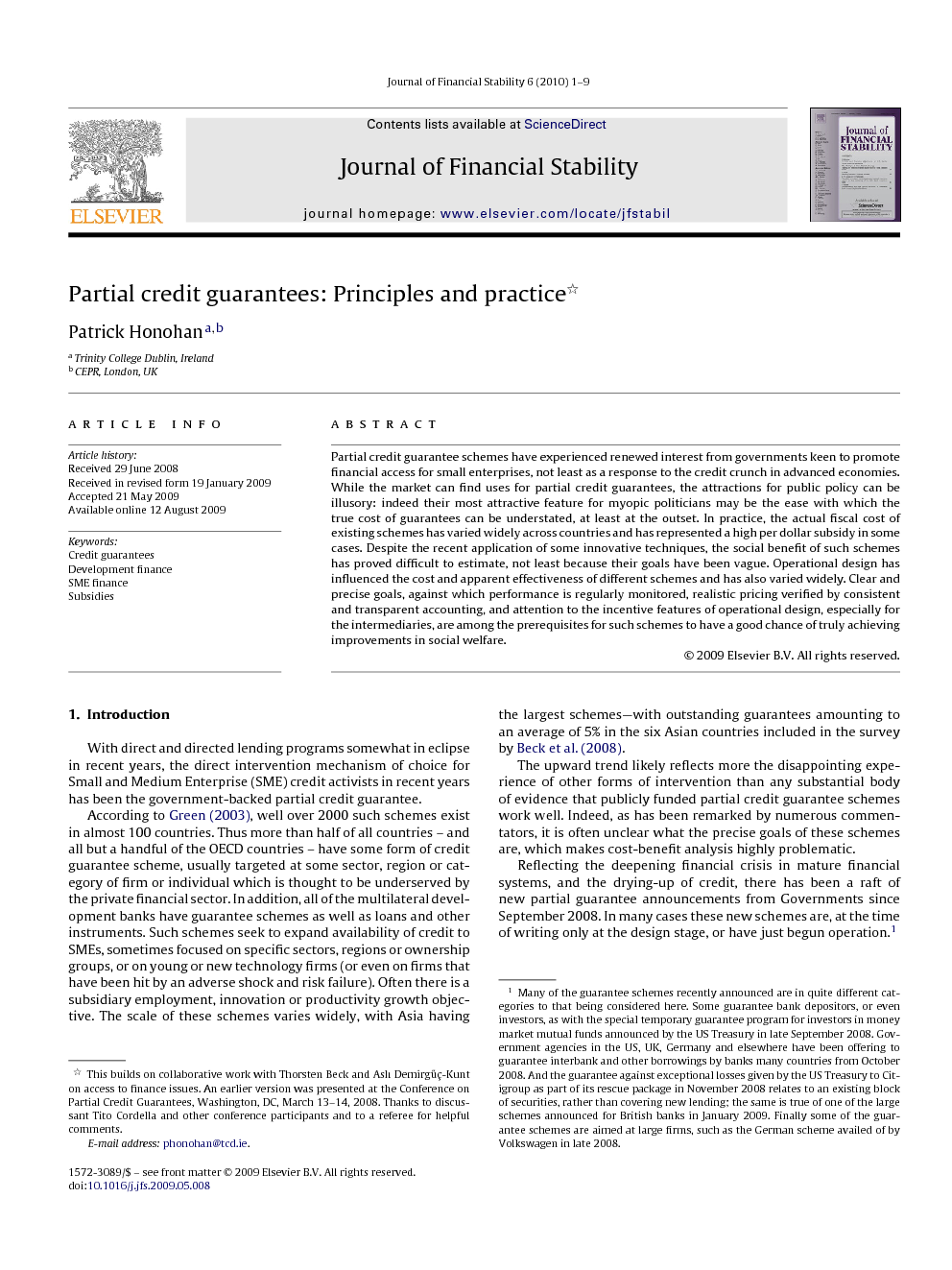 Partial credit guarantee schemes have experienced renewed interest from governments keen to promote financial access for small enterprises, not least as a response to the credit crunch in advanced economies. While the market can find uses for partial credit guarantees, the attractions for public policy can be illusory: indeed their most attractive feature for myopic politicians may be the ease with which the true cost of guarantees can be understated, at least at the outset. In practice, the actual fiscal cost of existing schemes has varied widely across countries and has represented a high per dollar subsidy in some cases. Despite the recent application of some innovative techniques, the social benefit of such schemes has proved difficult to estimate, not least because their goals have been vague. Operational design has influenced the cost and apparent effectiveness of different schemes and has also varied widely. Clear and precise goals, against which performance is regularly monitored, realistic pricing verified by consistent and transparent accounting, and attention to the incentive features of operational design, especially for the intermediaries, are among the prerequisites for such schemes to have a good chance of truly achieving improvements in social welfare.

With direct and directed lending programs somewhat in eclipse in recent years, the direct intervention mechanism of choice for Small and Medium Enterprise (SME) credit activists in recent years has been the government-backed partial credit guarantee. According to Green (2003), well over 2000 such schemes exist in almost 100 countries. Thus more than half of all countries – and all but a handful of the OECD countries – have some form of credit guarantee scheme, usually targeted at some sector, region or category of firm or individual which is thought to be underserved by the private financial sector. In addition, all of the multilateral development banks have guarantee schemes as well as loans and other instruments. Such schemes seek to expand availability of credit to SMEs, sometimes focused on specific sectors, regions or ownership groups, or on young or new technology firms (or even on firms that have been hit by an adverse shock and risk failure). Often there is a subsidiary employment, innovation or productivity growth objective. The scale of these schemes varies widely, with Asia having the largest schemes—with outstanding guarantees amounting to an average of 5% in the six Asian countries included in the survey by Beck et al. (2008). The upward trend likely reflects more the disappointing experience of other forms of intervention than any substantial body of evidence that publicly funded partial credit guarantee schemes work well. Indeed, as has been remarked by numerous commentators, it is often unclear what the precise goals of these schemes are, which makes cost-benefit analysis highly problematic. Reflecting the deepening financial crisis in mature financial systems, and the drying-up of credit, there has been a raft of new partial guarantee announcements from Governments since September 2008. In many cases these new schemes are, at the time of writing only at the design stage, or have just begun operation.1 Setting the scene for this special issue on partial credit guarantees, this paper argues that guarantee schemes offer several features that are seductive for politicians and administrators. The family resemblance that they bear to market-based institutions gives them an unwarranted public legitimacy, as do the evident market failures that exist in small business finance. Overoptimistic pricing and blurred accounting can conceal the true fiscal cost of schemes for a politically sufficient duration. Relatively small cash outlays (at least initially) can leverage large numbers of loans and volumes of lending for which the political system can take credit. In all of these dimensions guarantee schemes politically outperform direct government lending programs. Despite this heightened vulnerability of credit guarantee schemes to opportunistic or self-serving politicians, they can offer genuine advantages over direct government lending. The risk-sharing element with profit-oriented intermediary banks generates an independent creditworthiness hurdle for borrowers, and can also help bring transparency inasmuch as the intermediaries are aware of the loan-loss experience. By outsourcing the origination and servicing of the loan to a for-profit intermediary, operational efficiency may be improved. Besides, it is clear that market failure exists for SME lending and a well-designed and well-targeted policy intervention might improve welfare. Against that background, we begin (Section 2) by asking what the point of a loan guarantee is, pointing to the potential roles of differential information, risk-spreading and regulatory arbitrage in inducing the emergence of for-profit provision of such guarantees in the market. Section 3 turns to the diverse motivations for having government-sponsored schemes, considering both social welfare goals and the private interest of policymakers (public choice theory). We proceed to review evidence on the costs of existing schemes (Section 4), noting the very wide range of outcomes that have been experienced worldwide. The literature has begun to respond to earlier complaints about the paucity and lack of robustness of most cost-benefit studies in this area. The challenge of obtaining good benefit estimates remains, however, as we discuss in Section 5. The effectiveness of guarantee schemes in mobilizing the resources and skills of market intermediaries, and the likely benefit outcomes are considerably dependent on operational design (Section 6). Concluding remarks are in Section 7. We focus on guarantees for small business/small enterprise lending and in particular say little about programmes focused on guaranteeing exports credits against purchaser default.2

Credit guarantees have a natural place in the market and, where they are not sufficiently forthcoming, there may be scope for well-designed government-sponsored schemes as part of a welfare-improving policy of government intervention to improve the performance of financial intermediation with respect to SMEs. Such schemes will, however, never substitute for reform of the underlying institutional requirements of an effective credit system. The best schemes can probably survive and add value even without ongoing government subsidies, especially if carefully targeted on SME entrepreneurs currently excluded from credit for lack of collateral, and designed to provide dynamic incentives for market-based lenders to acquire skills in efficient and reliable appraisal of under-collateralized SME borrowers. But given the chequered record of such schemes in the advanced economies – and this is true of many other types of direct government intervention in the financial market – it is not just a question of avoiding unthinking transplantation of success stories; it is more a matter of pausing to consider whether, if success is unlikely in a favorable governance and general institutional environment, how likely is an adaptation to work in the more difficult environment of the developing world? Indeed, there is a clear danger that guarantee schemes are introduced because of their political attractions rather than because of likely welfare improvements. Experience shows that schemes can be quite costly, and these costs not widely known. The benefits too are often vague and little studied. Scheme design has varied widely and few schemes build in promising and readily available incentive structures. To overcome the hazards of short-termist policy, some simple good practice standards can be proposed. Thus, those introducing a loan guarantee scheme should ensure (i) clearly defined precise and coherent welfare improvement goals; (ii) a reliable and realistic approach to accounting so that costs can become clear early; (iii) built-in data collection that allows prompt evaluation of outcomes; (iv) attention to scheme design that maximizes the chance of successful goal achievement, limits the extent of the guaranteed loans as a percentage of total credit and places an affordable ceiling on total budgetary exposure; (v) transparency in operation and reporting: let daylight shine in!