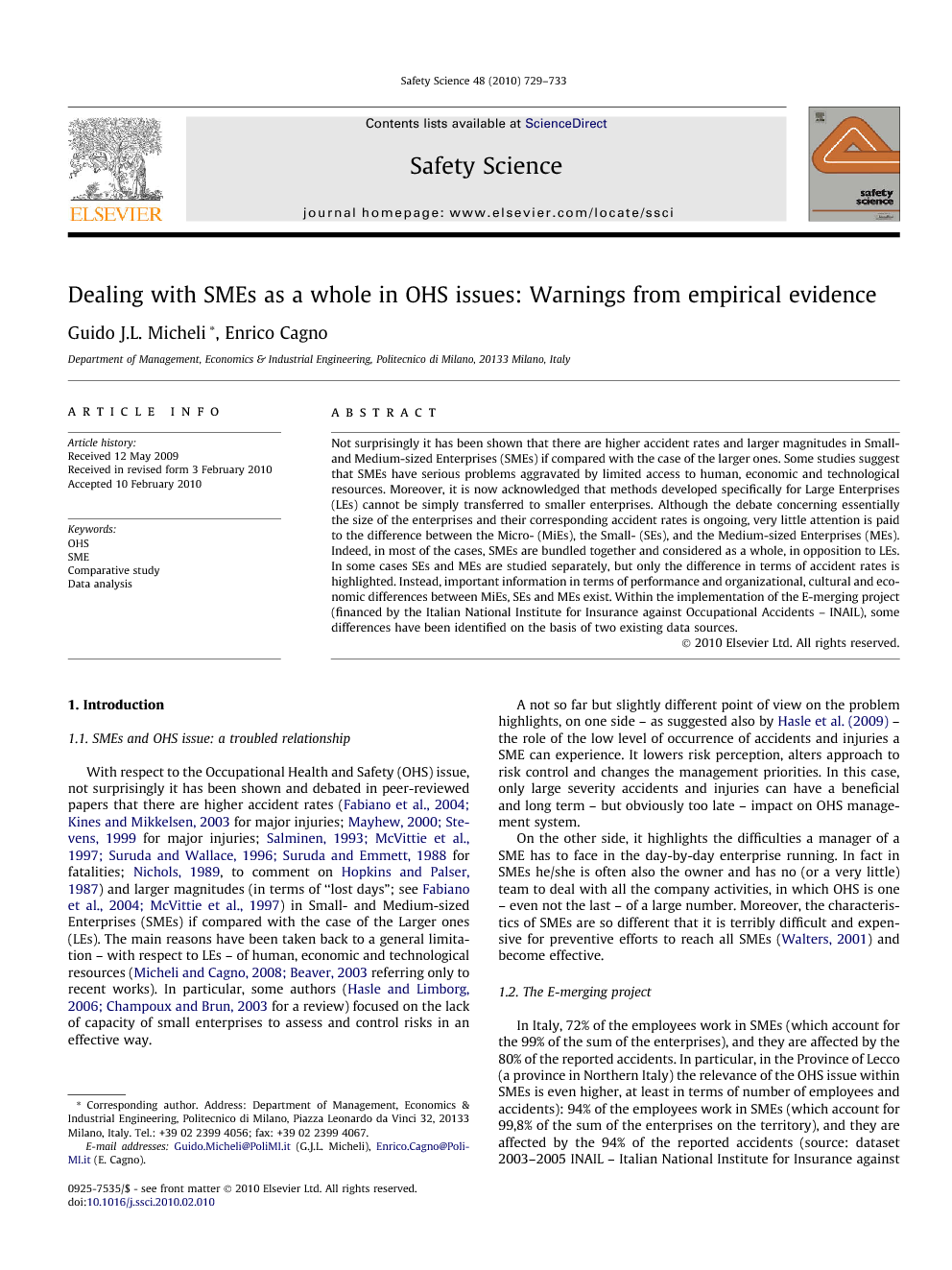 Not surprisingly it has been shown that there are higher accident rates and larger magnitudes in Small- and Medium-sized Enterprises (SMEs) if compared with the case of the larger ones. Some studies suggest that SMEs have serious problems aggravated by limited access to human, economic and technological resources. Moreover, it is now acknowledged that methods developed specifically for Large Enterprises (LEs) cannot be simply transferred to smaller enterprises. Although the debate concerning essentially the size of the enterprises and their corresponding accident rates is ongoing, very little attention is paid to the difference between the Micro- (MiEs), the Small- (SEs), and the Medium-sized Enterprises (MEs). Indeed, in most of the cases, SMEs are bundled together and considered as a whole, in opposition to LEs. In some cases SEs and MEs are studied separately, but only the difference in terms of accident rates is highlighted. Instead, important information in terms of performance and organizational, cultural and economic differences between MiEs, SEs and MEs exist. Within the implementation of the E-merging project (financed by the Italian National Institute for Insurance against Occupational Accidents – INAIL), some differences have been identified on the basis of two existing data sources.

Summing up, some warnings can be given to avoid bundling together Micro-, Small-, and Medium-sized Enterprises when it is not correct. This is an important contribution to the literature, which tends to consider those three different kinds of enterprises as a whole. As for the frequency and the magnitude, the existing literature has been overcome. In fact, a different performance can be expected from the Micro-sized Enterprise rather than from the Small- and the Medium-sized ones. In addition, the magnitude of the Small- and of the Medium-sized Enterprises is similar to the one of the LEs. On the other hand, as for the OHS-factors the Medium enterprises are quite different from the Micro- and Small-sized ones. This makes the size of the enterprise particularly relevant when an Organizational Safety and Health Management System has to be designed and implemented, as in the E-merging project is expected to be. As for the limitations, not all the results are currently fully generalizable. In fact, some of proposed results (i.e., the ones stemming from the survey data) have a limitation in the usage of dataset not specifically arranged for the investigation scope. Finally, many other OHS-factors could be investigated in terms of relation with the size of the Enterprise, as for example the ones identified for the E-merging project (Cagno and Micheli, 2008). For example: employment contract, kind of task, working time, quality of procedures, presence of non-EU workers, they all could affect the company performance, depending on its size. Further research is ongoing, in order to implement and use the database of E-merging, even to further validate the results of this paper.