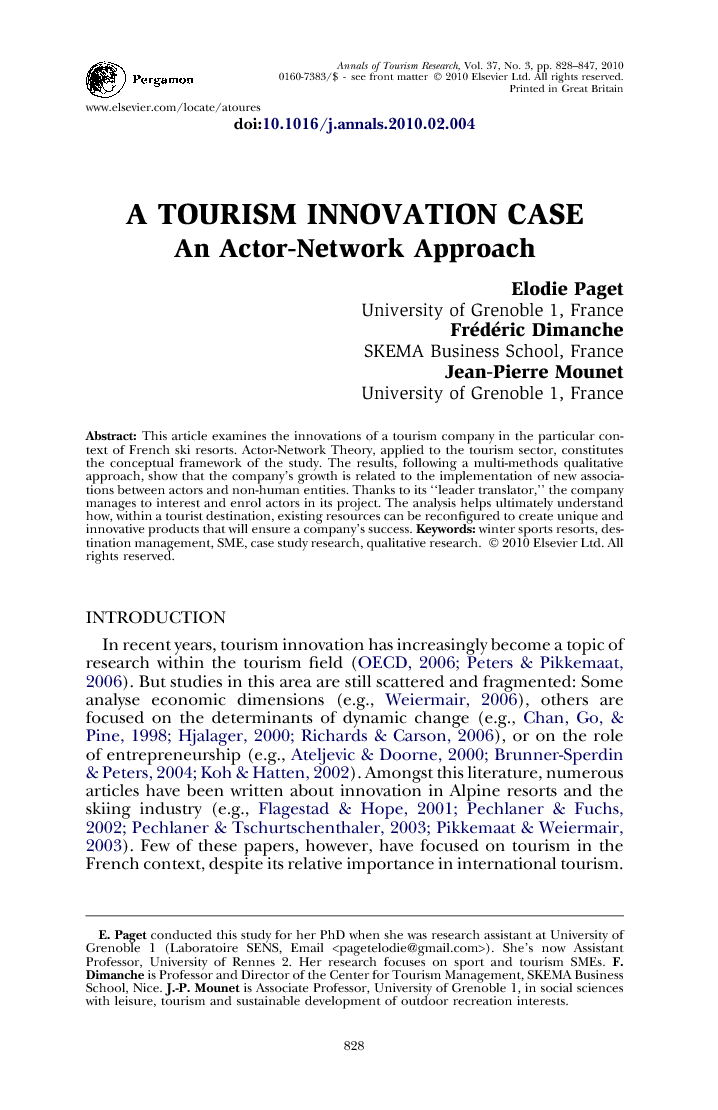 This article examines the innovations of a tourism company in the particular context of French ski resorts. Actor-Network Theory, applied to the tourism sector, constitutes the conceptual framework of the study. The results, following a multi-methods qualitative approach, show that the company’s growth is related to the implementation of new associations between actors and non-human entities. Thanks to its “leader translator,” the company manages to interest and enrol actors in its project. The analysis helps ultimately understand how, within a tourist destination, existing resources can be reconfigured to create unique and innovative products that will ensure a company’s success.

In recent years, tourism innovation has increasingly become a topic of research within the tourism field (OECD, 2006 and Peters and Pikkemaat, 2006). But studies in this area are still scattered and fragmented: Some analyse economic dimensions (e.g., Weiermair, 2006), others are focused on the determinants of dynamic change (e.g., Chan et al., 1998, Hjalager, 2000 and Richards and Carson, 2006), or on the role of entrepreneurship (e.g., Ateljevic and Doorne, 2000, Brunner-Sperdin and Peters, 2004 and Koh and Hatten, 2002). Amongst this literature, numerous articles have been written about innovation in Alpine resorts and the skiing industry (e.g., Flagestad and Hope, 2001, Pechlaner and Fuchs, 2002, Pechlaner and Tschurtschenthaler, 2003 and Pikkemaat and Weiermair, 2003). Few of these papers, however, have focused on tourism in the French context, despite its relative importance in international tourism. France’s position in international tourism is significant: According to the World Tourism Organisation (2007), it ranks first in terms of international tourist arrivals and third in terms of tourism revenues. Furthermore, it is a leader regarding winter sports with its 357 resorts out of the 4000 recorded worldwide (Ministère délégué au Tourisme, 2005). In France, the winter sports resorts market accounts for a large share of the tourism economy (Ministère délégué au Tourisme, 2008). However, winter sports are at a turning point here. The economic results are still favourable in major resorts but a number of cyclical and structural problems call into question their prosperity (Agrawala, 2007 and SEATM, 1993). These problems have led to a slower growth for the vast majority of the resorts, and this trend affects all market segments and all activity sectors of these tourist sites. Amongst French winter sports, skiing reigns supreme. The activity has been for a long time the “cash cow” that anchored the success of these tourist areas. French ski resorts have thus never really felt the need to diversify and therefore, resort activities essentially revolve around skiing. All product development and packaging are conceived around this activity. However, the necessary diversification of ski resorts is a problem that has repeatedly been raised in France since the beginning of the 1990s by various actors (FACIM, 2004, SEATM, 1993 and SEATM–BIPE, 1991). Expansion into new areas is presented as an imperative to address problems that are both cyclical (lack of snow, school holiday schedules) and structural (inadequate product offerings in response to evolving customer expectations). Although one could note some elements of product diversification in the resorts, these result from haphazard evolution rather than from a concerted planning approach. Moreover, these new products all appear to complement and add to the skiing activity. It is therefore difficult to really talk about innovation in French winter sports resorts: These are essentially tourist areas with a singular focus on skiing. In addition, French winter sports resorts represent a complex system involving a wide variety of actors. Most major stations are integrated resorts (e.g., Les Arcs 1950) created by a single operator who operates all resort activities. But French law (the so-called Mountain Law of 1985) now gives the municipality on which the resort stands the responsibility to manage and develop tourism in each resort. It then has the opportunity to take up management duties on its own (direct management) or to delegate it to a private sector operator. In the latter case, the delegation may involve only the operation of lifts (partial delegation) or both the operation of lifts and management of ski slopes (total delegation). Most major ski resorts in France operate under the latter model (Marcelpoil & Boudières, 2006). In addition, in a winter sports resort, a whole network of economic (independent tourism enterprises) and social (non governmental) actors revolve around these central actors (organizing authority and private operator). A French winter sports resort is thus characterized by a conglomerate of actors composed of tourist operators, local elected officials, and civil society. Winter sports resorts in France are therefore a complex system of action with specific operating logics, composed of a multitude of actors and strong corporatism. But among these actors, some companies manage to experience strong growth. Their success begs questions because these companies are paradoxically operating in an unfavourable context. Indeed, the tourism destinations in which they operate are no longer growing. Most of them are still profitable, but they represent a mature market with few prospects for development; their ability to innovate is questionable (we explained earlier that French winter sports resorts are essentially designed for the ski product). The purpose of this article is thus to understand how companies can succeed in this complex and unfavourable environment.

Various authors have studied tourism development, innovation, and entrepreneurship in Alpine regions (e.g., Flagestad and Hope, 2001, Pechlaner and Fuchs, 2002, Pechlaner and Tschurtschenthaler, 2003 and Pikkemaat and Weiermair, 2003). However, to our knowledge, none have previously considered business innovation with a qualitative approach centred on a specific business. The objective of this research was to better understand how an incoming tourism business, in a winter sports resort, succeeds in an environment that focuses on the skiing product. To answer the research question, the authors relied on qualitative methods and conducted a single case-study of a small destination management company named Delta. Actor-network theory applied to the tourism sector constituted the conceptual framework of the research. In this theoretical perspective, a winter sports resort can be considered as a hybrid network (Latour, 2005 and Van Der Duim, 2007), specifically designed for the skiing product, in which each of the involved actors (local elected officials, tourist operators, tourists, etc.) finds an interest. Nevertheless, in this stagnant environment—an irreversible network (Callon, 1986)—Delta has managed to market something other than skiing, and as a result experiences strong growth. The analysis shows that this corporate success stems from the fact that Delta is implementing a socio-technical innovation: The company has produced new associations of humans and non-humans, thereby moving the existing network by transforming it. A number of conditions are met so that an innovation can exist: External resources must be available and mobilized (resort actors, the ski area, the ski lifts, etc.) and an innovative leader should be capable of identifying market expectations and developing an appropriate service (original and secure). However, these conditions, although necessary, are not sufficient to ensure the success of the innovation. Actor-network theory highlights that innovation is not a linear process with “key success factors” but rather a whirling process. The innovation can only succeed if it is carried by a “collective” (Latour, 2005). But, to get the necessary support from the various stakeholders, the project has to be the subject of a translation with each of them. The case study of Delta shows how an innovation can emerge in a complex and unfavourable environment thanks to a translator who manages to recombine and to reinterpret actors and non-humans by an “interessement” (this French word is used by Akrich et al., 2002) and enrolment device. Latour (1996) showed that Aramis, a robotic transit system for Paris, which represented a technological innovation, died “for lack of love.” In the case of Delta, the opposite occurs. The exchanges are not necessarily completely win-win for all involved actors, and in addition, they require specific technical assemblies from those actors. Nevertheless, the actors adhere to Delta’s project and give it their support thanks to the many translations implemented by the entrepreneur, and this enables innovation to take place. This case study helps better understand the characteristics of a translator, which no empirical study has previously achieved in the tourism sector. In addition, few articles have focused on understanding innovation processes in tourism and even fewer have used actor-network theory to do so. Yet, this approach is particularly relevant, as we have seen, to the study of innovations and the tourism phenomenon because it conceives the society as an on-going process and not as an “already made society.” It therefore allows focus on the new associations and networks being formed. Apart from its contribution to knowledge and theory, this research could also serve as a source of inspiration for practitioners: It shows that, contrary to most current claims, it is the concatenation that can be novel, and not necessarily the actors or the non-human entities themselves. The innovation here relates to a different way of creating associations. This study helps understand how, within a tourist destination, it is possible to produce an innovation with existing resources, and how existing resources can be reconfigured to create a unique and innovative product that will ensure a company’s success.