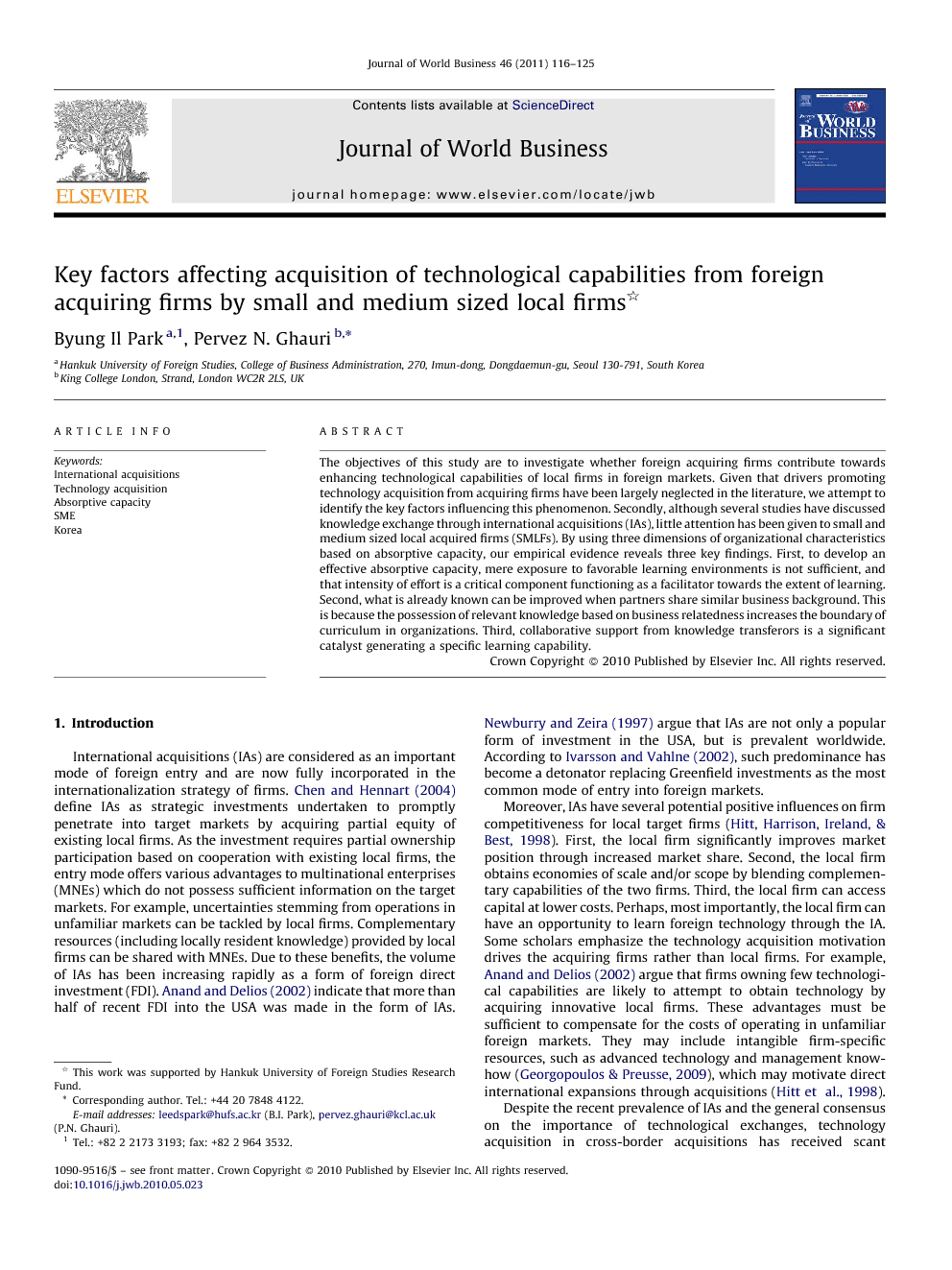 The objectives of this study are to investigate whether foreign acquiring firms contribute towards enhancing technological capabilities of local firms in foreign markets. Given that drivers promoting technology acquisition from acquiring firms have been largely neglected in the literature, we attempt to identify the key factors influencing this phenomenon. Secondly, although several studies have discussed knowledge exchange through international acquisitions (IAs), little attention has been given to small and medium sized local acquired firms (SMLFs). By using three dimensions of organizational characteristics based on absorptive capacity, our empirical evidence reveals three key findings. First, to develop an effective absorptive capacity, mere exposure to favorable learning environments is not sufficient, and that intensity of effort is a critical component functioning as a facilitator towards the extent of learning. Second, what is already known can be improved when partners share similar business background. This is because the possession of relevant knowledge based on business relatedness increases the boundary of curriculum in organizations. Third, collaborative support from knowledge transferors is a significant catalyst generating a specific learning capability.

International acquisitions (IAs) are considered as an important mode of foreign entry and are now fully incorporated in the internationalization strategy of firms. Chen and Hennart (2004) define IAs as strategic investments undertaken to promptly penetrate into target markets by acquiring partial equity of existing local firms. As the investment requires partial ownership participation based on cooperation with existing local firms, the entry mode offers various advantages to multinational enterprises (MNEs) which do not possess sufficient information on the target markets. For example, uncertainties stemming from operations in unfamiliar markets can be tackled by local firms. Complementary resources (including locally resident knowledge) provided by local firms can be shared with MNEs. Due to these benefits, the volume of IAs has been increasing rapidly as a form of foreign direct investment (FDI). Anand and Delios (2002) indicate that more than half of recent FDI into the USA was made in the form of IAs. Newburry and Zeira (1997) argue that IAs are not only a popular form of investment in the USA, but is prevalent worldwide. According to Ivarsson and Vahlne (2002), such predominance has become a detonator replacing Greenfield investments as the most common mode of entry into foreign markets. Moreover, IAs have several potential positive influences on firm competitiveness for local target firms (Hitt, Harrison, Ireland, & Best, 1998). First, the local firm significantly improves market position through increased market share. Second, the local firm obtains economies of scale and/or scope by blending complementary capabilities of the two firms. Third, the local firm can access capital at lower costs. Perhaps, most importantly, the local firm can have an opportunity to learn foreign technology through the IA. Some scholars emphasize the technology acquisition motivation drives the acquiring firms rather than local firms. For example, Anand and Delios (2002) argue that firms owning few technological capabilities are likely to attempt to obtain technology by acquiring innovative local firms. These advantages must be sufficient to compensate for the costs of operating in unfamiliar foreign markets. They may include intangible firm-specific resources, such as advanced technology and management know-how (Georgopoulos & Preusse, 2009), which may motivate direct international expansions through acquisitions (Hitt et al., 1998). Despite the recent prevalence of IAs and the general consensus on the importance of technological exchanges, technology acquisition in cross-border acquisitions has received scant attention. Although there are some exceptions that view that technological knowledge is shared between partners in IAs (e.g., Vermeulen and Barkema, 2001, Very and Schweiger, 2001 and Zou and Ghauri, 2008), we approach this issue from a different angle (i.e., knowledge acquisition from acquiring firms by local firms). The work of Bresman, Birkinshaw, and Nobel (1999) being a special case, but their examination refers to an international merger. Tsai (2001) argues that large subsidiaries usually have some advantages in gaining the parents’ support for their business activities and innovative operations, which often functions as a stimulant enhancing organizational absorptive capacity. Similarly, Simonin (1997) finds that firm size is a critical element significantly influencing collaborative sharing of experience between partners. For these reasons, Shenkar and Li (1999) suggest that the large subsidiaries should have more relevance to the knowledge acquired from the foreign firms than the smaller ones. According to Minbaeva, Pedersen, Bjorkman, Fey, and Park (2003), firm size represents the level of strategic position, and thus a stronger strategic position allows better access to knowledge and other resources. These discussions imply that large organizations usually own high level of absorptive capacity or organizational capabilities to develop it. On the other hand, small and medium sized enterprises (SMEs) may not have such a competence. We believe that it is worth identifying mechanisms and illuminating key factors affecting absorptive capacity particularly in these firms. However, it is hard to find empirical examinations focusing on absorptive capacity in SMLFs. The objectives of this study are twofold. First, this study considers the role of foreign acquiring firms in contributing technological capabilities to IAs in target markets. Second, this study identifies factors influencing the phenomenon.

This study reports three key findings. First, the mere possession of high quality human capital and international experience is not a sufficient condition for SMLFs to absorb new technology from foreign firms. The intensity of efforts is a critical foundation for effective learning. Second, among compatible characteristics between acquiring and acquired firms, similar business background is the most important element in that it can be the primary base for knowledge acquisition. When managers have prior related knowledge, they may not need to exercise experimental ways to acquire knowledge and thus it plays a pivotal role in learning new skills. Third, collaborative support from knowledge transferors is a prerequisite to help organizations to absorb technological capabilities. In addition, such a support is particularly crucial for SMEs, as they may not own sufficient capacities to acquire new knowledge, compared to larger firms. From theoretical point of view, Kim (1998) attempts to explain the absorptive capacity theory with two dimensions, prior knowledge base and intensity of effort to learn, and argues that absorptive capacity is significantly enhanced by rapid increase in both dimensions. Similar to his proposal, the results of this study suggest that knowledge acquirer's potential absorptive capacity to recognize and develop routines and commercially apply new external knowledge should be heightened rapidly when both dimensions are high. In addition, our findings highlight that small and medium sized firms in newly developing economies seek complementary knowledge and attempt to grasp learning opportunities, but they may not possess sufficient capacity to absorb invaluable new technology, compared to firms in developed economies. In this case, collaborative support by knowledge transferors plays a pivotal role in improving knowledge receiver's capacity to absorb new information. In short, Kim (1998) proposes that efficient knowledge acquisition requires two major elements that are prior knowledge base and intent to learn. On the other hand, we suggest that collaborative support by knowledge transferors contributes significantly to absorptive capacity in SMLFs. Although our findings contribute to the current literature and suggest practical implications, limitations should be acknowledged. We focus on only one geographical area, which offers a useful future research avenue. That is, the same research framework can be used to identify key factors affecting technology acquisition in different geographical contexts (i.e., would the results also be a template for SMLFs in other regions such as China, India, elsewhere?). Additional results found in other contexts will clearly illuminate the conditions for technology acquisition by SMLFs. We tackle only one specific type of knowledge (i.e., technological capabilities). Thus, if future studies investigate the association between key factors and different information (e.g., marketing and human resource practices), the findings will enhance the precision of our knowledge. Finally, the dependent variable was measured only by respondents’ perceptual judgments. Although we found the minimum presence of common method bias through factor analysis, given the nature of the respondents and the type of measurements, we acknowledge it as another limitation in this study.