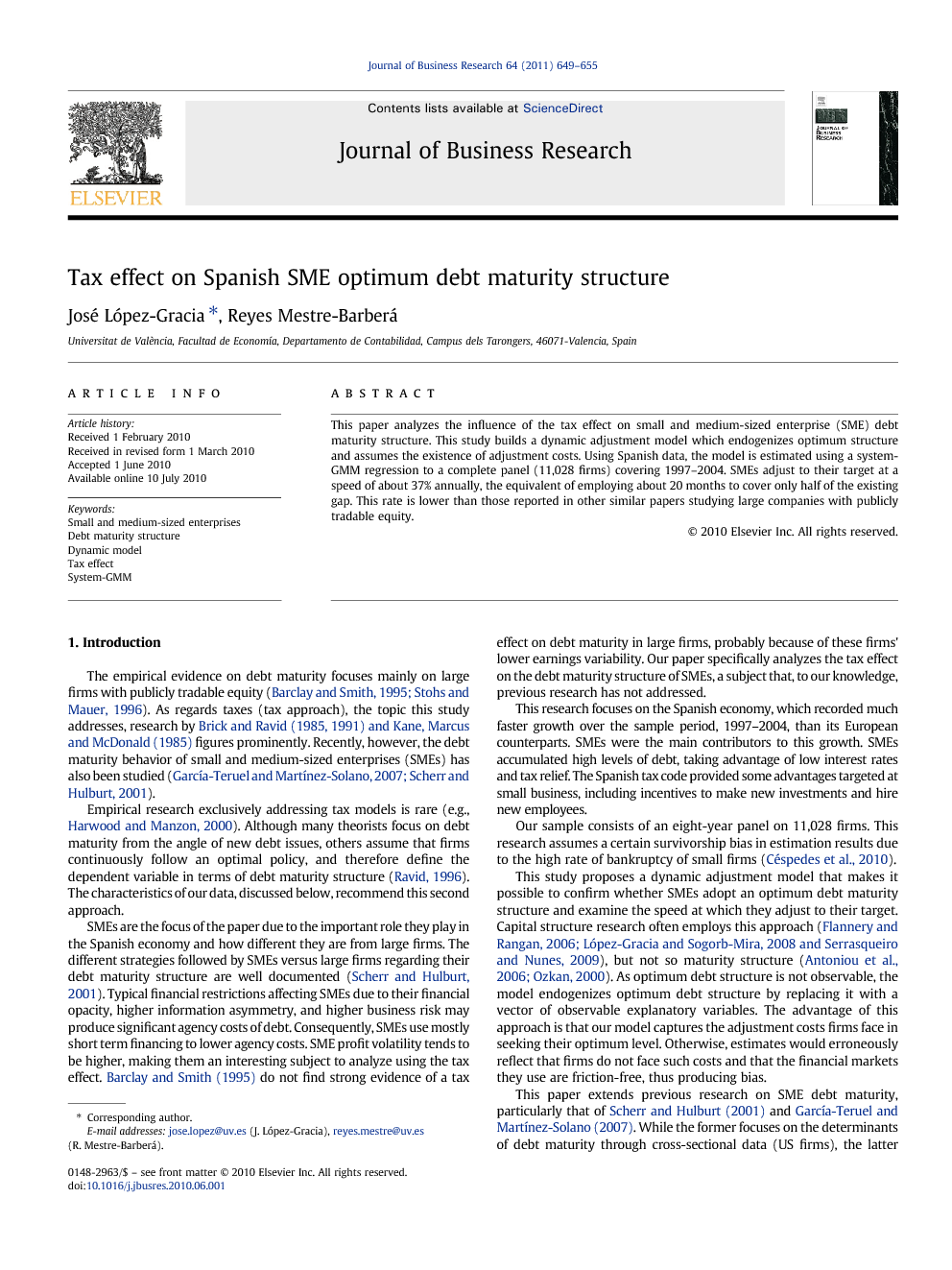 This paper analyzes the influence of the tax effect on small and medium-sized enterprise (SME) debt maturity structure. This study builds a dynamic adjustment model which endogenizes optimum structure and assumes the existence of adjustment costs. Using Spanish data, the model is estimated using a system-GMM regression to a complete panel (11,028 firms) covering 1997–2004. SMEs adjust to their target at a speed of about 37% annually, the equivalent of employing about 20 months to cover only half of the existing gap. This rate is lower than those reported in other similar papers studying large companies with publicly tradable equity.

The empirical evidence on debt maturity focuses mainly on large firms with publicly tradable equity (Barclay and Smith, 1995 and Stohs and Mauer, 1996). As regards taxes (tax approach), the topic this study addresses, research by Brick and Ravid, 1985, Brick and Ravid, 1991 and Kane et al., 1985 figures prominently. Recently, however, the debt maturity behavior of small and medium-sized enterprises (SMEs) has also been studied (García-Teruel and Martínez-Solano, 2007 and Scherr and Hulburt, 2001). Empirical research exclusively addressing tax models is rare (e.g., Harwood and Manzon, 2000). Although many theorists focus on debt maturity from the angle of new debt issues, others assume that firms continuously follow an optimal policy, and therefore define the dependent variable in terms of debt maturity structure (Ravid, 1996). The characteristics of our data, discussed below, recommend this second approach. SMEs are the focus of the paper due to the important role they play in the Spanish economy and how different they are from large firms. The different strategies followed by SMEs versus large firms regarding their debt maturity structure are well documented (Scherr and Hulburt, 2001). Typical financial restrictions affecting SMEs due to their financial opacity, higher information asymmetry, and higher business risk may produce significant agency costs of debt. Consequently, SMEs use mostly short term financing to lower agency costs. SME profit volatility tends to be higher, making them an interesting subject to analyze using the tax effect. Barclay and Smith (1995) do not find strong evidence of a tax effect on debt maturity in large firms, probably because of these firms' lower earnings variability. Our paper specifically analyzes the tax effect on the debt maturity structure of SMEs, a subject that, to our knowledge, previous research has not addressed. This research focuses on the Spanish economy, which recorded much faster growth over the sample period, 1997–2004, than its European counterparts. SMEs were the main contributors to this growth. SMEs accumulated high levels of debt, taking advantage of low interest rates and tax relief. The Spanish tax code provided some advantages targeted at small business, including incentives to make new investments and hire new employees. Our sample consists of an eight-year panel on 11,028 firms. This research assumes a certain survivorship bias in estimation results due to the high rate of bankruptcy of small firms (Céspedes et al., 2010). This study proposes a dynamic adjustment model that makes it possible to confirm whether SMEs adopt an optimum debt maturity structure and examine the speed at which they adjust to their target. Capital structure research often employs this approach (Flannery and Rangan, 2006, López-Gracia and Sogorb-Mira, 2008 and Serrasqueiro and Nunes, 2009), but not so maturity structure (Antoniou et al., 2006 and Ozkan, 2000). As optimum debt structure is not observable, the model endogenizes optimum debt structure by replacing it with a vector of observable explanatory variables. The advantage of this approach is that our model captures the adjustment costs firms face in seeking their optimum level. Otherwise, estimates would erroneously reflect that firms do not face such costs and that the financial markets they use are friction-free, thus producing bias. This paper extends previous research on SME debt maturity, particularly that of Scherr and Hulburt (2001) and García-Teruel and Martínez-Solano (2007). While the former focuses on the determinants of debt maturity through cross-sectional data (US firms), the latter analyzes a data panel of Spanish manufacturing firms and considers a trade-off between risk and return as per Jun and Jen (2003). In contrast, this paper focuses on the tax effect on debt maturity and uses a dynamic analysis approach. This research contributes to the current literature in several specific ways. First, our sample includes all SMEs from a relatively new database. Second, this research focuses on the tax effect on debt maturity, which has been seldom applied to SMEs. Third, our empirical methodology consists of estimating a dynamic adjustment model, which is also uncommon in the debt maturity literature. Finally, the research applies a novel estimation technique, system-GMM regression, which improves the efficiency of estimates, makes it possible to estimate the speed of adjustment to optimal debt maturity, and incorporates industry effects. The main results indicate that the model fits the data well and that SMEs seem to adopt an optimum debt maturity structure, which they converge to slowly due to the high adjustment costs they face. Average adjustment speed is estimated at around 37%, the equivalent of taking some 20 months to cover half the existing gap. This adjustment rate is slower than the 50% estimated for large firms with publicly tradable debt (Antoniou et al., 2006 and Ozkan, 2000). The effective tax rate is highly significant and both the interest rate gap and interest rate volatility also have a significant impact on debt maturity.

This paper provides empirical evidence on the determinants of Spanish SME debt maturity structure and the speed at which these firms adjust to their optimum structure. Results show that SMEs sought out optimum debt maturity structure throughout 1997–2004. A dynamic adjustment model fits the data well and confirms its suitability for SMEs. The two system-GMM estimates indicate a speed-of-adjustment score of 30% and 37%, respectively, the equivalent of a firm taking 20 months to cover half the distance between its beginning-of-year structure and the optimum structure. This result is lower than the case of large companies with publicly tradable equity, where the few extant studies report figures of about 50%. Thus, SMEs may prefer to remain unbalanced, rather than reach their targets at top speed due to the high adjustment costs they face. The results also indicate that such high adjustment costs could be a consequence of the financial restrictions afflicting SMEs. As regards the factors that determine optimum debt maturity structure from the perspective of the tax approach, the evidence from the system-GMM estimation is robust and indicates a strong positive relationship with the term structure of interest rates and interest rate volatility, as expected. Debt maturity is strongly related to the effective tax rate, particularly when firms have few alternative tax exemptions. The debt ratio, firm size, growth opportunities and asset maturity significantly affect debt maturity. These results are in line with both Scherr and Hulburt (2001) and García-Teruel and Martínez-Solano (2007) on SMEs and offer a new perspective based on tax rationale and the advantages of a dynamic model. Nevertheless, some care must be taken when comparing the results of this research, as they have two possible limitations stemming from (i) the fact that hypotheses are formulated under a general tax approach commonly used on large (traded) firms and (ii) possible survivorship bias caused by the use of a complete data panel.