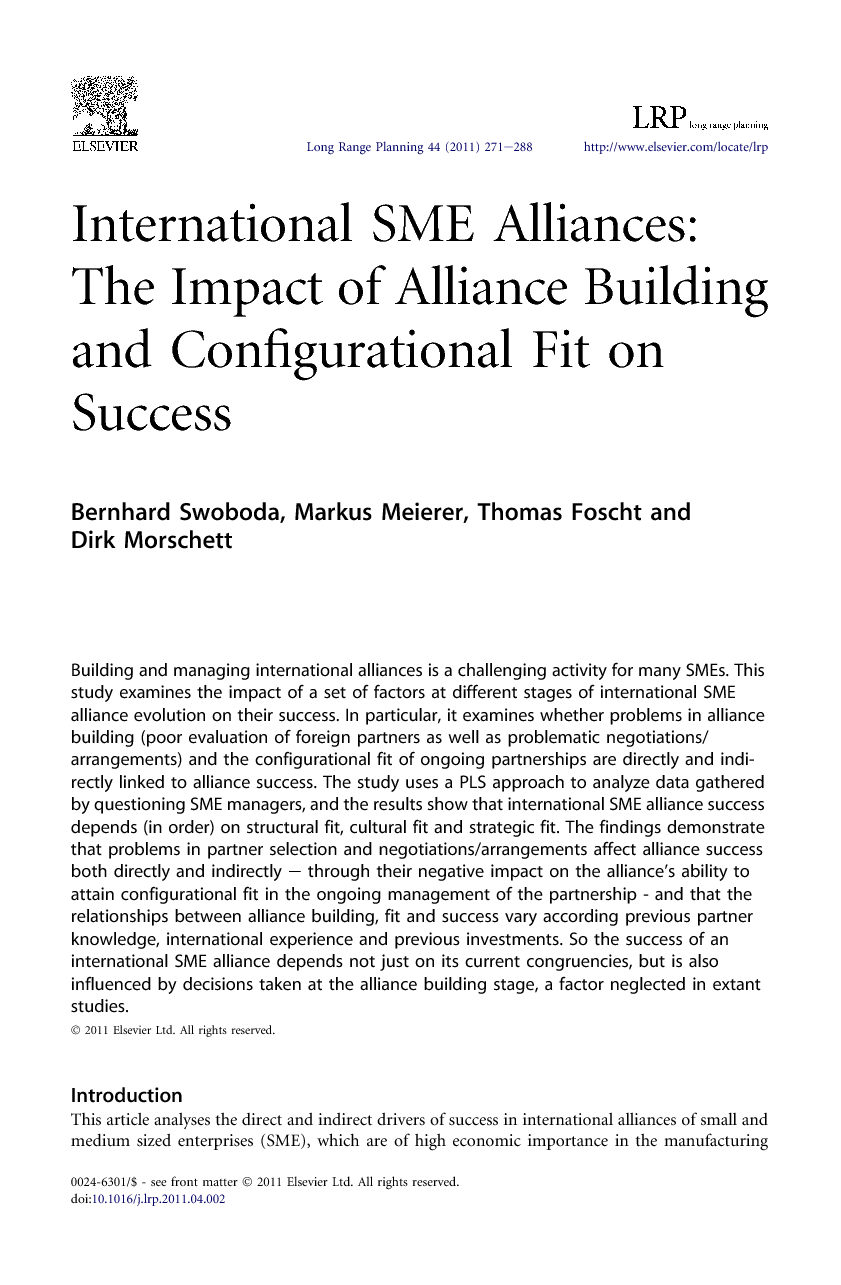 Building and managing international alliances is a challenging activity for many SMEs. This study examines the impact of a set of factors at different stages of international SME alliance evolution on their success. In particular, it examines whether problems in alliance building (poor evaluation of foreign partners as well as problematic negotiations/arrangements) and the configurational fit of ongoing partnerships are directly and indirectly linked to alliance success. The study uses a PLS approach to analyze data gathered by questioning SME managers, and the results show that international SME alliance success depends (in order) on structural fit, cultural fit and strategic fit. The findings demonstrate that problems in partner selection and negotiations/arrangements affect alliance success both directly and indirectly – through their negative impact on the alliance’s ability to attain configurational fit in the ongoing management of the partnership - and that the relationships between alliance building, fit and success vary according previous partner knowledge, international experience and previous investments. So the success of an international SME alliance depends not just on its current congruencies, but is also influenced by decisions taken at the alliance building stage, a factor neglected in extant studies.

This article analyses the direct and indirect drivers of success in international alliances of small and medium sized enterprises (SME), which are of high economic importance in the manufacturing sectors of Europe's leading economies (OECD, 2007, Lu and Beamish, 2001, Lu and Beamish, 2006, Coviello and McAuley, 1999 and Shrader, 2001). Alliances generally allow firms to focus on their own competences while relying on their partner(s) in other areas, but international alliances are increasingly being used to provide firms with specific advantages, such as access to distant countries at reduced risk. International alliances are defined as joint ventures, licensing, distribution/production agreements (Bierly and Gallagher, 2007). Scholars have shown that international alliances differ from domestic partnerships (Sirmon and Lane, 2004), and that alliances of smaller firms differ from those between large firms (Alvarez and Barney, 2001, Gomes-Casseres, 1997 and Kirby and Kaiser, 2005). But, while internationalisation is still a critical challenge for smaller firms (Jones and Coviello, 2005), many SME do not use international alliances as modes for foreign operation or, if they do, fail to maintain them. Studies on SME alliances generally examine the decision to build an alliance, and many address the diverse management decisions that arise at different stages of an alliance’s evolution (Shah and Swaminathan, 2008 and Patzelt and Shepherd, 2008), but without questioning the dependencies between the drivers of SME alliance success. However, the present study shows that international SME alliance success depends directly on congruencies in the management of ongoing international SME alliances, and also - directly and indirectly - on alliance building (i.e., partner selection and basic partnership negotiations). Our observations broaden the work of scholars who have focused on direct success drivers at different alliance evolution stages, (e.g., Simons and Royer (2006) on alliance building, Ireland et al. (2002) on alliance management, Lee (2007) or Meijaard et al. (2005) on alliance structure, or Hoffmann and Schlosser (2001) on key success factors), although we do not see those stages as independent from one another. Our analysis of success, congruencies in alliance management, and partner selection is also shaped by several articles in this journal by Bierly and Gallagher, 2007 and Douma et al., 2000 and Hoffmann and Schlosser (2001), which have evaluated individual alliance challenges, but which do not focus on international SME alliances (Street and Cameron, 2007). The perspective of this study provides SME managers with recommendations on how to succeed in alliance evolution. The article is structured as follows. After illustrating the stages of alliance evolution, a framework is provided which identifies the important drivers of success in international SME alliances. Considering this conceptual framework and theory, we derive hypotheses as the basis for the empirical study that follows, based on responses from managers of German SMEs. Our results are then discussed, and finally limitations and directions for further research addressed.

We first address the impact of configurational fit on international SME alliance success, and then clarify how a set of possible problems during partner selection and negotiations/agreements may influence success, directly and indirectly. We contribute to the literature – which is largely composed of studies that focus only on single or direct success drivers, and which mostly relates only to national alliances – by showing, from our combined analysis of strategic, cultural and structural fit, and of partner selection and negotiations/agreement factors, that these can strongly impact alliance success (see the R2 values in Table 4). This represents both a theoretical and a practical contribution in underlining the role of fit approaches in international alliance evolution research. We address the implications regarding configurational fit and the effects of alliance building on success separately in this section, and also discuss briefly the influences of our control variables.