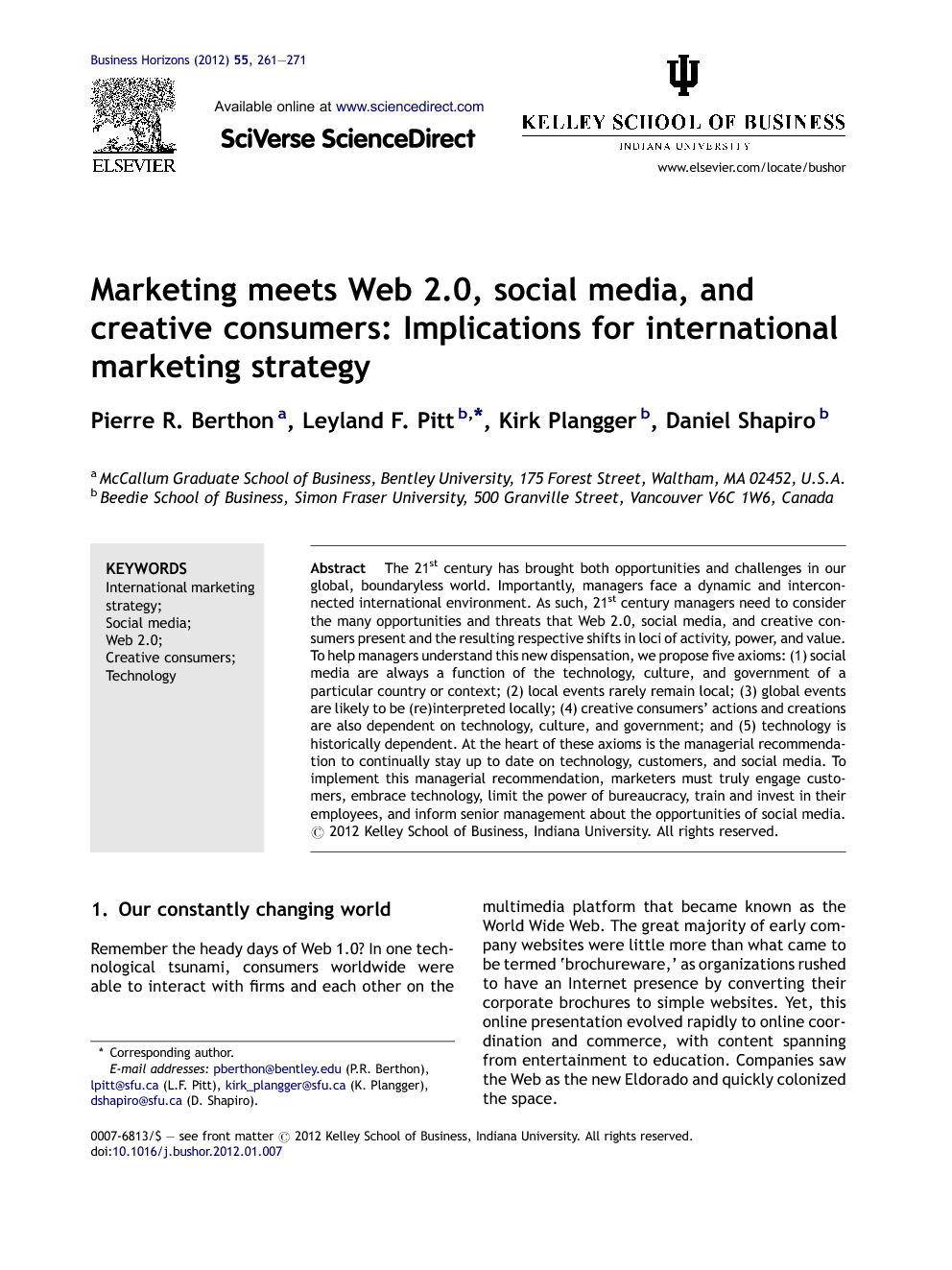 The 21st century has brought both opportunities and challenges in our global, boundaryless world. Importantly, managers face a dynamic and interconnected international environment. As such, 21st century managers need to consider the many opportunities and threats that Web 2.0, social media, and creative consumers present and the resulting respective shifts in loci of activity, power, and value. To help managers understand this new dispensation, we propose five axioms: (1) social media are always a function of the technology, culture, and government of a particular country or context; (2) local events rarely remain local; (3) global events are likely to be (re)interpreted locally; (4) creative consumers’ actions and creations are also dependent on technology, culture, and government; and (5) technology is historically dependent. At the heart of these axioms is the managerial recommendation to continually stay up to date on technology, customers, and social media. To implement this managerial recommendation, marketers must truly engage customers, embrace technology, limit the power of bureaucracy, train and invest in their employees, and inform senior management about the opportunities of social media.

The theme of this special issue is strategic marketing in a changing world, and in this article, we have taken the term ‘world’ in two senses. First, we use it in the sense of the world of marketing and second in the sense of marketing in the world (i.e., international marketing). Thus, we explore some of the primary drivers of change in the world of marketing and how these impact international marketing strategy. Moreover, we show that rather than marketing being reactive to a changing world, it is in fact one of the primary drivers of change. To recap, Web 2.0 technologies have enabled three main changes: a shift in activity location from the desktop to the Web, a shift in locus of value production from the firm to the citizen, and a shift in locus of power from the firm to the individual and the collective (Figure 1). To help international marketing strategists, we articulated five axioms that underpin the new marketing dispensation. To manage these, we offer a series of recommendations and highlight the barriers to implementation of a successful international social media strategy. Our first recommendation is that international marketing strategists understand the technology that underpins social media and creative consumers. Web 2.0 is a collection of technologies, and whether they like it or not, marketers have to comprehend how these technologies work and the phenomena they enable. Our second recommendation is to understand the consumer. Technology has transformed the traditionally passive consumer into a major source of creative talent. For marketers, the tables are now turned, and there has been a shift in the relative locus of power from the firm to the consumer. International marketers have become susceptible to consumers who formerly possessed little in the way of traditional power but can now direct the new powers of networks and influence afforded by social media. While it is one thing to learn how to relinquish control of a brand, it is another when value creation shifts from the firm to the customer. Marketers used to seek people to consume their products; now, they seek people to produce the value they seek to leverage. Given this unsettling scenario, the goal shifts from ‘telling the customer’ to enticing customers to participate in value creation. Our third recommendation is to understand social media. This entails two elements: the social and the media. The social involves the dynamics of networks, the power of the collective, and the wisdom and folly of the crowd. The media involves questions of how new media fit or integrate with traditional media and how marketers should manage and direct marketing dollars in the new ecosystem. These three shifts result in a number of substantial barriers to the implementation of a successful international social media strategy: 1. The attitude and language of engagement is one major barrier. Marketers will have to listen and learn, rather than preach. In doing so, they will need to adopt the right tone and take the right actions. They will need to learn to engage, not bully customers; and to take a personal, not an officious, tone in conversations with consumers. 2. The successful implementation of social media plans has to do with technology. There is the paradoxical situation in many of today's organizations where they are attempting to engage stakeholders by means of social media, while at the same time prohibiting their own employees from using social networking tools at work. There are too many reported instances of employees being banned from using the social networking tools they are told to use. 3. Bureaucracy is an impediment to the implementation of social media plans. Social media strategy requires speed and flexibility. However, bureaucratic rules can kill, or at least stifle, the successful implementation of effective social media plans. 4. An obvious barrier to social media plan implementation is that employees lack IT and communication skills. Frequently, these skills are not included in fundamental training. For example, a Deloitte LLP (2009) study found that while 74% of employees surveyed said it is easy to damage a company's reputation on social media, a mere 17% of companies have programs in place to monitor and mitigate the potential reputational risks related to social network use. According to Leonard (2009), there is a clear consensus among social media experts that establishing social media guidelines and training employees on the proper use of social media within those guidelines is paramount to running a successful company. The author goes on to state, however, that very little training in this regard is actually being delivered. 5. Many organizations are still oblivious to what has been termed the ‘digital divide,’ a situation in which many parts of the population—even in developed countries—do not have access to basic computing tools, such as desktops and broadband Internet access, let alone more sophisticated social networking tools. 6. Finally, it is still true that senior decision makers in some organizations see social media as the wasteful pastime of teenagers. A recent survey found while 58% of executives agreed that reputational risk and social networking should be a boardroom issue, only 15% said it actually was an issue (Deloitte LLP, 2009). However, for social media plans to succeed, they need the buy-in and support of senior managers who really understand how to move from ‘Big Brother’ to ‘engagement at a par.’ The 21st century has brought both opportunities and challenges in this global, boundaryless world. Marketing managers face a dynamic and interconnected international environment. As such, they have to consider the many opportunities and threats that Web 2.0, social media, and creative consumers present, and marketing managers need to learn to work within the resulting respective shifts in loci of activity, power, and value.