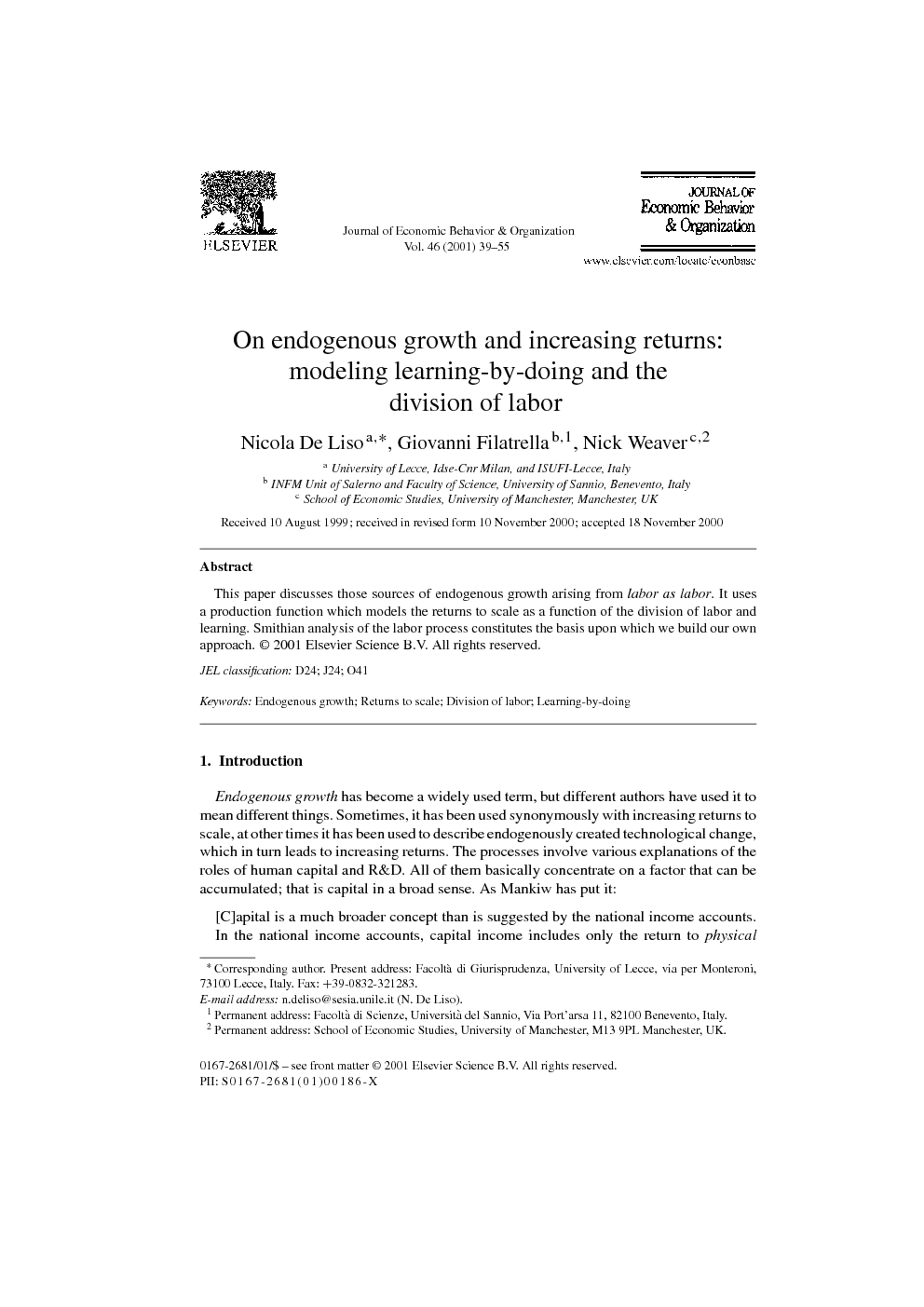 This paper discusses those sources of endogenous growth arising from labor as labor. It uses a production function which models the returns to scale as a function of the division of labor and learning. Smithian analysis of the labor process constitutes the basis upon which we build our own approach.

Endogenous growth has become a widely used term, but different authors have used it to mean different things. Sometimes, it has been used synonymously with increasing returns to scale, at other times it has been used to describe endogenously created technological change, which in turn leads to increasing returns. The processes involve various explanations of the roles of human capital and R&D. All of them basically concentrate on a factor that can be accumulated; that is capital in a broad sense. As Mankiw has put it: [C]apital is a much broader concept than is suggested by the national income accounts. In the national income accounts, capital income includes only the return to physical capital… More generally, however, we accumulate capital whenever we forgo consumption today in order to produce more income tomorrow. In this sense, one of the most important forms of capital accumulation is the acquisition of skills. Such human capital includes both schooling and on-the-job-training ( Mankiw, 1995, p. 293). The role of capital, broadly defined, has been carefully examined in the context of endogenous growth. Indeed, it explains a good deal of endogenous growth. In the present work, however, we look at the sources of endogenous growth in labor rather than capital. That is, we will highlight the role of labor in a narrow sense by deliberately avoiding issues related to human capital. In this context, we can identify two sources of increasing returns to scale: the division of labor and learning-by-doing. Both these phenomena have been recognized as important since Adam Smith (1776), and have been repeatedly referred to by many authors, from Young to Arrow and others.

Since, the late 1980s endogenous growth has become central to economic analysis, and it has been widely explained by means of the role played by physical and human capital and/or R&D activities. Economists, however, have been conscious for a long time of the existence of two more forces which contribute to growth, i.e. the division of labor and learning-by-doing. What we have attempted here is the formalization of a production process characterized by endogenous growth generated by the two forces just mentioned. Thus, rather than focusing, as is conventional, on the roles of both physical and human capital, we have focused our attention on ‘simple’ labor. Taking as a starting point a production function with labor as the only variable input, we have pointed out three main reasons that can lead to endogenously created increasing returns, namely a more detailed division of labor, learning-by-doing concerning the individual and learning-by-doing concerning the organization as a whole. We have then divided the exponent of the production function, Z, into two varying entities, the first being related to the process of division of labor, the second being related to learning. Neither the division of labor nor learning, within a given plant or work process, can grow forever. Mathematically, the first component can be approximated by a logistic equation, while the second, which subsumes both the individual and the organization as a whole, is approximated by a difference equation relating the stock of knowledge, via the exponent Z, to cumulative output. Now, despite the fact that we had to make some assumptions on the functional forms and we made use of specific values for the parameters, we have to point out that the qualitative results do not depend on such choices; furthermore, the formalization proposed, explains whyZ can have different values at different times.