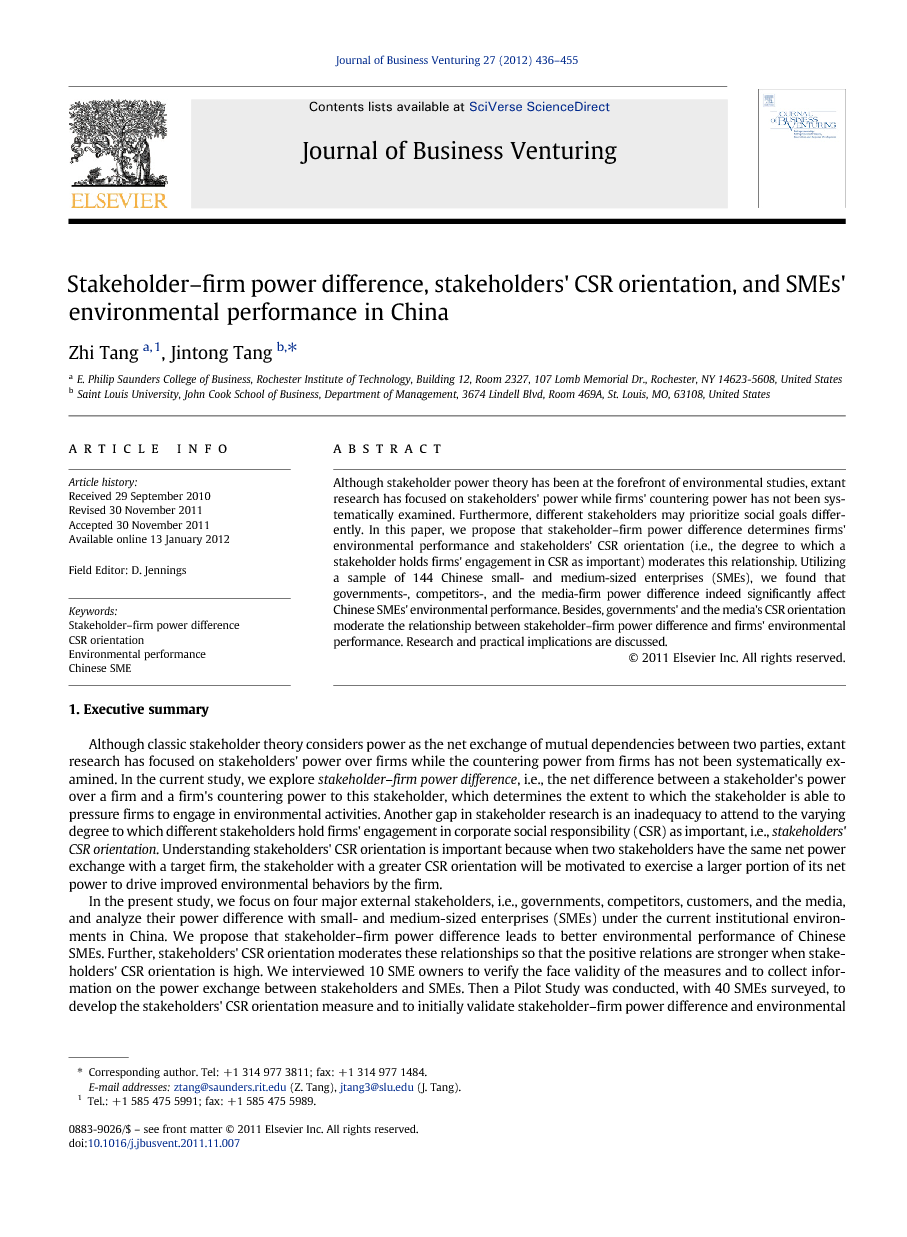 Stakeholder power theory has been at the forefront in explaining the motivation and strategies of a company's environmental initiatives (Agle et al., 1999, Frooman, 1999 and Mitchell et al., 1997). While adequate attention has been given to the absolute power of stakeholders, the countering power of firms has not been systematically examined in the extant literature. This topic is especially acute in emerging economies because in the process of developing their regulatory, industrial, and social environments, firms can utilize “gray areas” to challenge stakeholders' power (Li and Zhang, 2007). Thus, the net power between stakeholders and the firm, instead of stakeholders' absolute power, should be a better predictor of the firm's environmental performance. Furthermore, in the context of an emerging economy, stakeholders may not desire environmental performance to the same extent as their counterparts in a mature economy do. Constrained by low income and low environmental awareness, some stakeholders may prefer to mobilize their power to pursue goals other than environmental friendliness. Drawing from research on stakeholder salience (Agle et al., 1999 and Mitchell et al., 1997), stakeholder influence strategies (Frooman, 1999), and the effect of institutional environments on firms' social performance (Maignan and Ralston, 2002 and McCarthy and Puffer, 2008a), we attempt to move the stakeholder theory forward by addressing two questions: (1) How does stakeholder–firm power difference, i.e., the net difference between a stakeholder's power over a firm and a firm's countering power to this stakeholder, affect Chinese small- and medium-sized enterprises' (SMEs) environmental performance? (2) How does stakeholders' CSR orientation, i.e., the degree to which stakeholders hold firms' engagement in corporate social responsibility (CSR) as important, affect the above relationship? In the present research, CSR refers to a company's configuration of social responsibility, social responsiveness, policies, programs, and observable outcomes as they are related to the company's relationship with society ( Wood, 1991). This definition has been found especially applicable to international CSR studies ( Maignan and Ralston, 2002), including the CSR studies conducted in the Chinese context ( Luo, 2006). We focus on Chinese SMEs because although China is playing an increasingly important role in the world economy and a substantial amount of effort has been devoted to studying Chinese firms' financial performance, little is known about their environmental performance (e.g., Fryxell and Lo, 2003 and Matten and Moon, 2008). SMEs in China warrant special attention due to the vast number of SMEs and their dominant position in the national economy. For example, 99% of ventures in China are SMEs which collectively generate 60% of total industrial GDP and 75% of jobs (China Statistical Yearbook, 2008). Meanwhile, according to the Ministry of Environmental Protection of the People's Republic of China (2006), 80% of Chinese SMEs have pollution problems, which account for 60% of the national pollution. Indeed, large-scale empirical research on Chinese SMEs' environmental performance is urgently needed. Our study helps fill in a few gaps in stakeholder research. First, previous stakeholder theorists (e.g., Mitchell et al., 1997 and Pfeffer and Salancik, 1978) have largely depicted firms as recipients of stakeholder power, whereas the countering power possessed by firms has not been empirically explored. Although the importance of studying the mutual power between stakeholders and firms has been acknowledged (Clement, 2005 and Frooman, 1999), efforts to define and examine such a mutual power in CSR studies are limited. In this study, we systematically assess the impact of the net power difference between four major external stakeholders (i.e., governments, competitors, customers, and the media) and SMEs on SMEs' environmental performance in an Eastern Chinese manufacturing region. Second, although extant stakeholder research recognizes that stakeholders in general prefer improved environmental performance (e.g., Kassinis and Vafeas, 2006), it rarely incorporates the fact that the degree of that preference may vary among stakeholder groups. In this paper, we account for this variance by proposing the notion of stakeholders' CSR orientation. When the stakeholder–firm power difference is the same, stakeholders with stronger CSR orientation will direct more of their power to influence firms' environmental performance. Hence, our study extends stakeholder research by taking into account the effect of stakeholders' CSR orientation when examining the stakeholder–firm power relationship. Third, our study highlights the important role of institutional environments in stakeholder research. Due to the idiosyncratic political structure, social norms, and legal environment in China (Baron and Tang, 2009 and Tang et al., 2008), conclusions regarding the stakeholder–firm relationship drawn from Western studies may not be generalized to the Chinese context. For instance, China became the first major country that bans the production, selling, and usage of plastic bags with thickness under .025 mm, on June 1, 2008. Such an impulsive action can probably only take place in China (i.e., without a lasting, draining legislative process) due to heavy governmental interventions in economic activities. In addition, as the media in China do not possess the same level of independence as their Western counterparts do, it will further complicate the interaction between the media and firms. In this study, we illustrate how the unique institutional environment in China may change the power exchange between stakeholders and SMEs. To this end, we first review studies on stakeholder salience theory and stakeholder influence strategies. We then draw on the current institutional environments in China along with the perspective of liabilities of smallness to propose hypotheses regarding the relationships between stakeholder–firm power difference and Chinese SMEs' environmental performance. We also predict that such relationships are subject to the moderating effect of stakeholders' CSR orientation. Ten exploratory interviews, a Pilot Study of 40 Chinese SMEs, and a main study consisting of a large-scale survey of 300 SMEs (suppliers of a major chemical product manufacturing company) in China were conducted. Conclusions and implications are provided in the end.