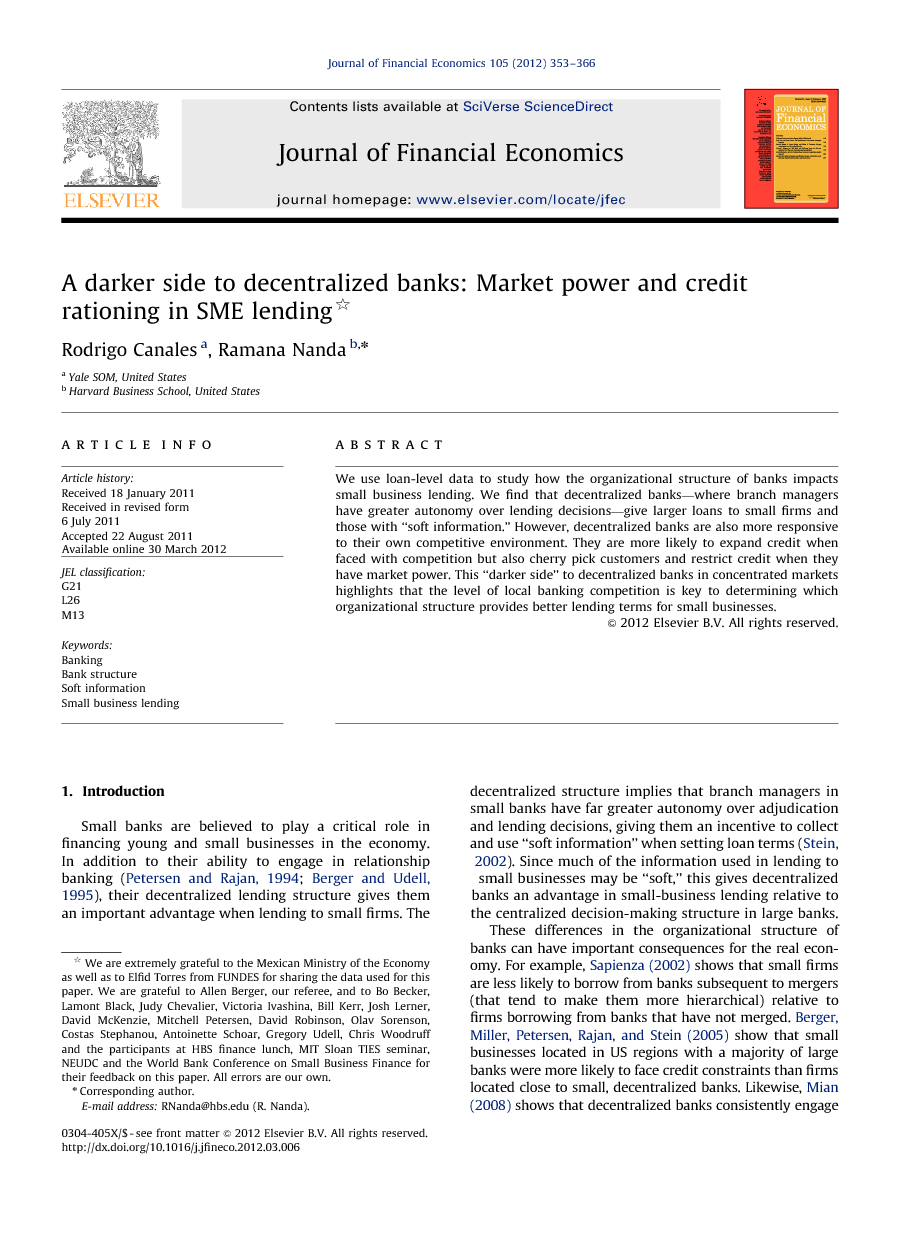 We use loan-level data to study how the organizational structure of banks impacts small business lending. We find that decentralized banks—where branch managers have greater autonomy over lending decisions—give larger loans to small firms and those with “soft information.” However, decentralized banks are also more responsive to their own competitive environment. They are more likely to expand credit when faced with competition but also cherry pick customers and restrict credit when they have market power. This “darker side” to decentralized banks in concentrated markets highlights that the level of local banking competition is key to determining which organizational structure provides better lending terms for small businesses.

Small banks are believed to play a critical role in financing young and small businesses in the economy. In addition to their ability to engage in relationship banking (Petersen and Rajan, 1994 and Berger and Udell, 1995), their decentralized lending structure gives them an important advantage when lending to small firms. The decentralized structure implies that branch managers in small banks have far greater autonomy over adjudication and lending decisions, giving them an incentive to collect and use “soft information” when setting loan terms (Stein, 2002). Since much of the information used in lending to small businesses may be “soft,” this gives decentralized banks an advantage in small-business lending relative to the centralized decision-making structure in large banks. These differences in the organizational structure of banks can have important consequences for the real economy. For example, Sapienza (2002) shows that small firms are less likely to borrow from banks subsequent to mergers (that tend to make them more hierarchical) relative to firms borrowing from banks that have not merged. Berger, Miller, Petersen, Rajan, and Stein (2005) show that small businesses located in US regions with a majority of large banks were more likely to face credit constraints than firms located close to small, decentralized banks. Likewise, Mian (2008) shows that decentralized banks consistently engage in more lending activity to small firms in markets with weak contract enforceability. The predominant view that emerges from this literature is that decentralized banks are the better answer for credit-constrained small firms that may otherwise be excluded from bank finance. Using a loan-level data set on Small and Medium Enterprise (SME) lending in Mexico, we find that this positive picture of decentralized banks does not always hold true. While our results are consistent with prior work in this literature, we show that the same discretion that allows branch managers of decentralized banks to act on soft information also allows them to be more responsive to their own competitive environment when setting loan terms. This can be beneficial for small businesses in competitive banking markets where decentralized banks can help alleviate credit constraints. But, in line with Rajan (1992), it also implies that decentralized banks might better-exploit their market power in concentrated banking markets by restricting credit or charging higher interest rates to small businesses. Our empirical analyses are based on a comprehensive, loan-level panel data set on SME loans in Mexico, covering the period 2002–2006. We find that small firms and those that tend to rely more on “soft information” get larger loans from decentralized banks. These results are even stronger when using instrumental variables, indicating that the differences across banks lie not just in the terms of lending, but also in the types of firms that get approved for a loan. In concentrated banking markets, however, decentralized banks are more likely than centralized banks to cherry pick the best firms, give them smaller loans, and charge higher rates of interest. This is particularly true for firms in the services sector, that provide less “hard information” to banks, have less collateral, and hence tend to have fewer outside options for external finance. Our results confirm the findings that decentralized banks are more likely to use soft information when setting loan terms. However, we show that this can have both positive and negative consequences for small firms. While some of our results complement prior findings by showing the benefits of decentralized banks, the results also highlight that there may be a darker side to decentralized bank lending. Put differently, the relative benefit of decentralized bank structures for small business lending may depend on the institutional and competitive environment in which banks are located. A novel feature of our analysis is that it allows us to get direct measures of organizational structure without relying on the size of the banks. Since our results are based on banks that have large, national presences but differ in their organizational structure, we can also show that it is in fact the organizational structure of banks that drives the observed patterns in our data as opposed to some other factor that may be correlated with bank size (e.g., Brickley, Linck, and Smith, 2003). In this way, the paper ties together two literatures that focus on small business lending but have so far remained largely separate.1 On the one hand, it is related to studies examining how competition in the banking industry impacts credit constraints of small startups (Petersen and Rajan, 1995, Black and Strahan, 2002, Cetorelli, 2004, Cetorelli and Strahan, 2006, Zarutskie, 2006 and Kerr and Nanda, 2009). On the other, it is related to studies examining how bank structure affects lending outcomes (Stein, 2002 and Berger et al., 2005). In tying together these two literatures, our findings may also explain why entrepreneurship increased significantly following the cross-state US banking deregulations from the late 1970s through the early 1990s, despite the fact that the deregulations led to a wave of M&A activity where the number of small banks fell dramatically. The increase in entry following the deregulation is seen as a puzzle by some, as a decrease in the number of small banks should have been associated with a decline in entrepreneurship. Our result highlights that the increase in entrepreneurship in this instance may have occurred precisely because small banks had been effective in exploiting their monopoly power in the period before the deregulation. In this context, the competition between large banks—a second best outcome in itself—was nonetheless a better outcome for entrepreneurs than borrowing from monopolist small banks. The rest of the paper is structured as follows: In Section 2, we outline the theoretical considerations for the paper. In Section 3, we outline our estimation design and the series of institutional features we exploit in our analysis. Section 4 provides an overview of the data and the descriptive statistics. Section 5 outlines our regression results. Finally, in Section 6 we have a brief discussion of our results, and conclusions.

Young and small firms are especially dependent on external finance for their growth and survival. The vast majority of their financing—especially in developed markets—tends to come from banks (Berger and Udell, 1998 and Robb and Robinson, 2009). Given the size of such businesses, credit is often concentrated at a single intermediary where the borrower has a lending relationship (Petersen and Rajan, 1994; Fluck, Holtz-Eakin, Rosen, 1998; Sapienza, 2002). Small businesses, and particularly young small businesses, have little internal cash flow to finance their operations and are also associated with significant asymmetric information. Accordingly, a potential concern for policy-makers is that these businesses face credit constraints. This is certainly the case in Mexico, where smaller firms mostly have to rely on expensive trade credit or the owners' personal credit cards to finance their operations (Fisman and Love, 2003). A large body of academic research has therefore focused on how the structure of the banking industry, both in terms of the competitive environment for banks and in the organizational structure of banks themselves, is associated with product market outcomes for small businesses. However, the two streams of study—one focused on banking competition and the other on bank structure—have remained largely independent of each other, and in fact, generated potentially contradictory findings. On the one hand, research on the organizational structure of banks has focused on the benefits of a decentralized banking structure in the context of small business lending. On the other hand, research looking at small business lending suggests that banking deregulation led to a widespread increase in entrepreneurial activity despite the wave of mergers that led small, decentralized banks to fall significantly following the deregulations (Black and Strahan, 2002; Kerr and Nanda, 2009). Our approach in this paper brings together the literature related to the organizational structure of banks with the one looking at banking competition to look at how the interaction between these two factors impacts the deal terms offered to small businesses. Our results show that branch managers in decentralized banks are more sensitive to the local environment than branch managers in centralized banks. They give more attractive terms to firms in competitive banking markets, but are more likely to cherry pick firms and restrict credit in areas where they have market power. Thus, the extent to which decentralized banks alleviate credit constraints depends critically on the competitive environment for banks. Viewed in the context of our results, previous findings that appeared contradictory now make sense: while decentralized banks are indeed better than centralized banks at alleviating credit constraints for small businesses in competitive markets, they are in fact worse than centralized banks in concentrated banking markets. Thus, an increase in banking competition alongside an increase in the presence of centralized banks due to M&A activity would still have had a positive impact on entrepreneurship as a result of the reduction in monopoly power of small decentralized banks. Our findings may also shed light on the mechanism behind the findings by Berger, Saunders, Scalise, and Udell (1998) that bank mergers in the US tended to increase small business lending by competitors to the merging banks, as well as the finding by Erel (2009) that the M&A activity following the US branch banking deregulations led to a sharp fall in the interest rates for firms, particularly for small businesses. Our results build on the empirical work of Sapienza (2002) and Berger, Miller, Petersen, Rajan, and Stein (2005) who find that the organizational structure of banks can have important consequences for the small businesses that seek credit in a given market. While they proxy for the decentralized nature of the lending technology using bank size, our in-depth qualitative interviews with the major banks in Mexico allowed us to identify large banks with decentralized lending structures. Our results therefore also speak to the hypothesis that Berger, Miller, Petersen, Rajan, and Stein (2005) raise in their conclusion that “a large organization might, at least to a degree, be able to enjoy the best of both worlds if it sets up the internal structure that achieves the right level of decentralization.” We are also able to look at the rates of default for the different types of banks, so that we can show more directly that the differences in deal terms seem to be driven more by the lending technology of banks rather than other factors such as their inherent risk preferences. Our findings also have implications for public policy. Prior work has identified the relative benefit of decentralized (small) banks in alleviating credit constraints among small businesses—in the context of more competitive environments. It thus has argued that the key issue from a public policy standpoint may not be market power in the traditional Herfindahl Index sense, but more about the choice of banks that firms have access to. Our results suggest that both the organizational structure and the localized market power of a bank are relevant for SME lending, and they should not be considered independently. This implication is also related to other work looking at the importance of examining organizational structure within the context of the institutional environment and not treating it in isolation (e.g., Raith, 2003).