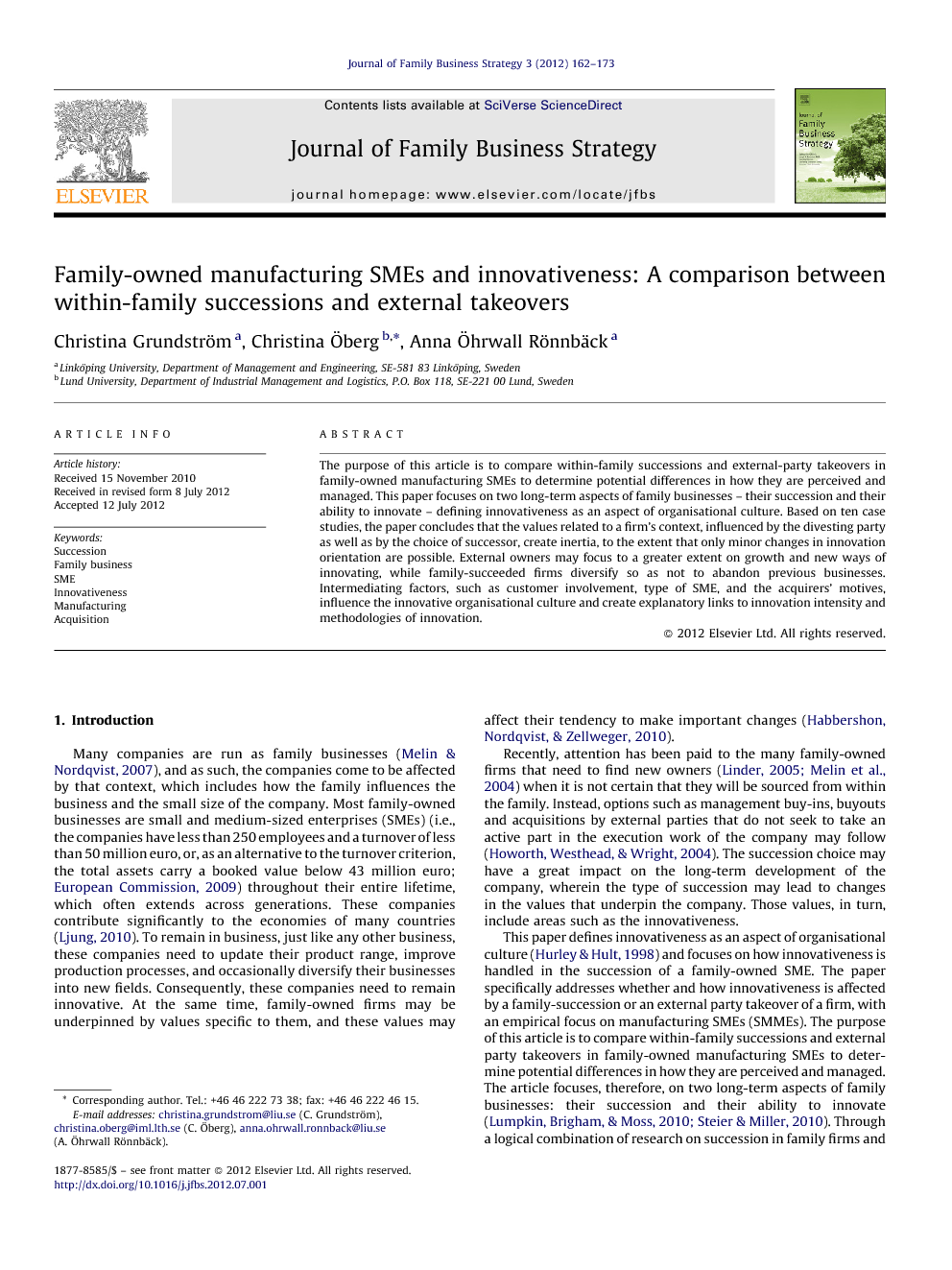 The purpose of this article is to compare within-family successions and external-party takeovers in family-owned manufacturing SMEs to determine potential differences in how they are perceived and managed. This paper focuses on two long-term aspects of family businesses – their succession and their ability to innovate – defining innovativeness as an aspect of organisational culture. Based on ten case studies, the paper concludes that the values related to a firm's context, influenced by the divesting party as well as by the choice of successor, create inertia, to the extent that only minor changes in innovation orientation are possible. External owners may focus to a greater extent on growth and new ways of innovating, while family-succeeded firms diversify so as not to abandon previous businesses. Intermediating factors, such as customer involvement, type of SME, and the acquirers’ motives, influence the innovative organisational culture and create explanatory links to innovation intensity and methodologies of innovation.

Many companies are run as family businesses (Melin & Nordqvist, 2007), and as such, the companies come to be affected by that context, which includes how the family influences the business and the small size of the company. Most family-owned businesses are small and medium-sized enterprises (SMEs) (i.e., the companies have less than 250 employees and a turnover of less than 50 million euro, or, as an alternative to the turnover criterion, the total assets carry a booked value below 43 million euro; European Commission, 2009) throughout their entire lifetime, which often extends across generations. These companies contribute significantly to the economies of many countries (Ljung, 2010). To remain in business, just like any other business, these companies need to update their product range, improve production processes, and occasionally diversify their businesses into new fields. Consequently, these companies need to remain innovative. At the same time, family-owned firms may be underpinned by values specific to them, and these values may affect their tendency to make important changes (Habbershon, Nordqvist, & Zellweger, 2010). Recently, attention has been paid to the many family-owned firms that need to find new owners (Linder, 2005 and Melin et al., 2004) when it is not certain that they will be sourced from within the family. Instead, options such as management buy-ins, buyouts and acquisitions by external parties that do not seek to take an active part in the execution work of the company may follow (Howorth, Westhead, & Wright, 2004). The succession choice may have a great impact on the long-term development of the company, wherein the type of succession may lead to changes in the values that underpin the company. Those values, in turn, include areas such as the innovativeness. This paper defines innovativeness as an aspect of organisational culture (Hurley & Hult, 1998) and focuses on how innovativeness is handled in the succession of a family-owned SME. The paper specifically addresses whether and how innovativeness is affected by a family-succession or an external party takeover of a firm, with an empirical focus on manufacturing SMEs (SMMEs). The purpose of this article is to compare within-family successions and external party takeovers in family-owned manufacturing SMEs to determine potential differences in how they are perceived and managed. The article focuses, therefore, on two long-term aspects of family businesses: their succession and their ability to innovate (Lumpkin et al., 2010 and Steier and Miller, 2010). Through a logical combination of research on succession in family firms and innovation management, the article develops propositions that are then tested using a sample of five within-family succeeded SMMEs and five family SMMEs that were taken over by external parties (Eisenhardt, 1991). The cases are then used to develop new ideas that the current literature has not yet sufficiently addressed (Siggelkow, 2007). Much research into family business succession deals with the processes of the transaction and integration phases (Ragozzino and Reuer, 2007 and Scholes et al., 2007), or it discusses the characteristics specific to family succession (family and business, legal, finance and tax issues, practical approaches to the succession, and other barriers) (Ip & Jacobs, 2006). Less is known about what happens following the succession, as well as the ways in which this phase differs if the company is taken over by an external party. In the related literature on innovations in acquisitions, scholars have generally focused on scenarios in which a large company takes over a small, innovative one (Ahuja and Katila, 2001 and Lengnick-Hall, 1992) and in which the acquired party is usually seemingly newly established (Boeker and Karichalil, 2002, Christensen, 2006 and Fillion, 1966). Overall, the literature on acquisitions involving small firms is limited, although it is a frequent practice (Hussinger, 2010). The remainder of the article is structured as follows. The next section outlines the theoretical point of departure: succession and take-over of family-businesses, innovativeness as an aspect of organisational culture, and how innovativeness could be expected to be handled in the case of such successions. The following section covers methodology. The article is based on ten cases of successions in family-owned SMMEs, five of which were taken over by family members, while the rest were acquired by external parties. These successions are briefly described. In the findings section, the ten cases are analysed in terms of innovation type, innovation intensity, and change. Research propositions are discussed in relation to the cases. The article ends with conclusions, managerial implications, limitations and ideas for future research.