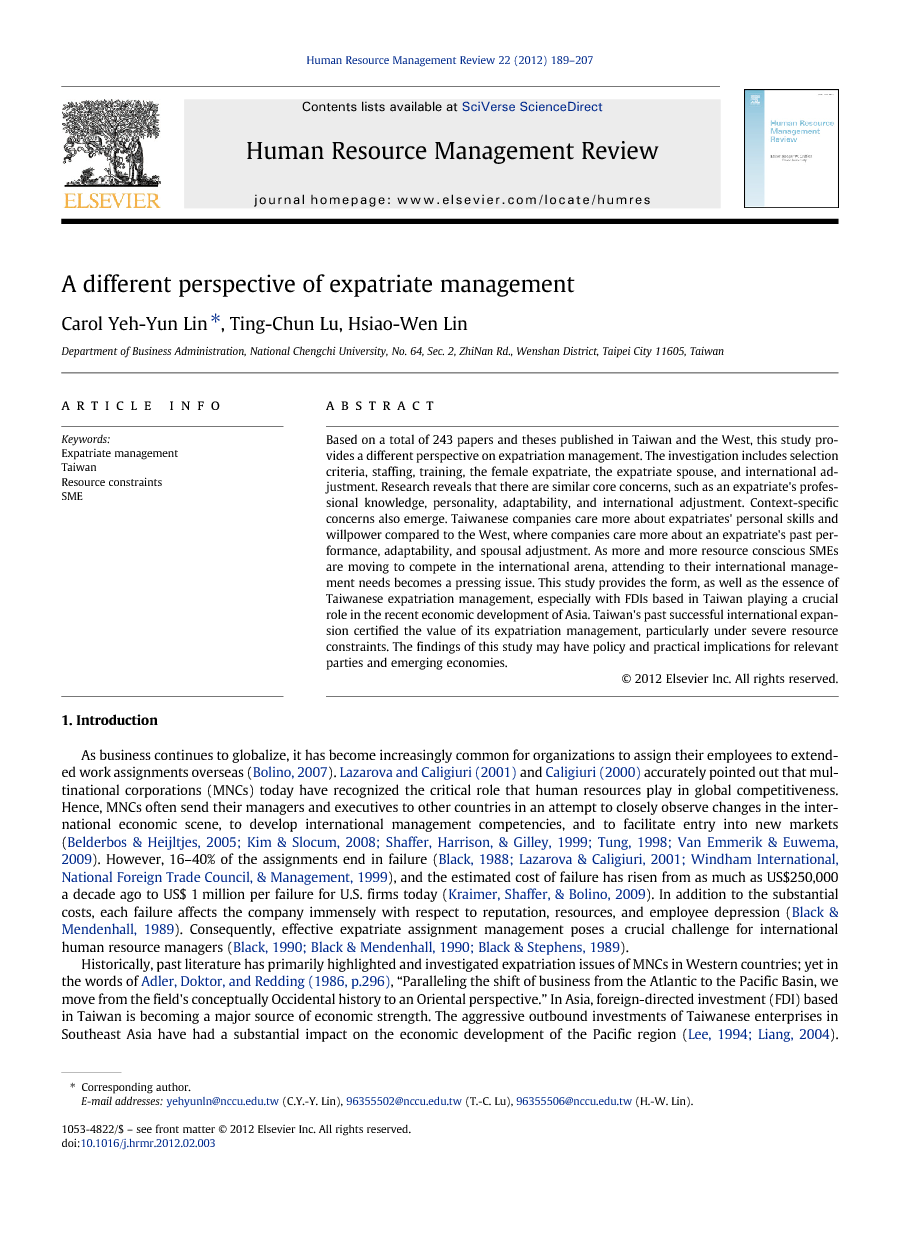 Based on a total of 243 papers and theses published in Taiwan and the West, this study provides a different perspective on expatriation management. The investigation includes selection criteria, staffing, training, the female expatriate, the expatriate spouse, and international adjustment. Research reveals that there are similar core concerns, such as an expatriate's professional knowledge, personality, adaptability, and international adjustment. Context-specific concerns also emerge. Taiwanese companies care more about expatriates' personal skills and willpower compared to the West, where companies care more about an expatriate's past performance, adaptability, and spousal adjustment. As more and more resource conscious SMEs are moving to compete in the international arena, attending to their international management needs becomes a pressing issue. This study provides the form, as well as the essence of Taiwanese expatriation management, especially with FDIs based in Taiwan playing a crucial role in the recent economic development of Asia. Taiwan's past successful international expansion certified the value of its expatriation management, particularly under severe resource constraints. The findings of this study may have policy and practical implications for relevant parties and emerging economies.

As business continues to globalize, it has become increasingly common for organizations to assign their employees to extended work assignments overseas (Bolino, 2007). Lazarova and Caligiuri (2001) and Caligiuri (2000) accurately pointed out that multinational corporations (MNCs) today have recognized the critical role that human resources play in global competitiveness. Hence, MNCs often send their managers and executives to other countries in an attempt to closely observe changes in the international economic scene, to develop international management competencies, and to facilitate entry into new markets (Belderbos and Heijltjes, 2005, Kim and Slocum, 2008, Shaffer et al., 1999, Tung, 1998 and Van Emmerik and Euwema, 2009). However, 16–40% of the assignments end in failure (Black, 1988, Lazarova and Caligiuri, 2001 and Windham International, National Foreign Trade Council, and Management, S. f. H. R, 1999), and the estimated cost of failure has risen from as much as US$250,000 a decade ago to US$ 1 million per failure for U.S. firms today (Kraimer, Shaffer, & Bolino, 2009). In addition to the substantial costs, each failure affects the company immensely with respect to reputation, resources, and employee depression (Black & Mendenhall, 1989). Consequently, effective expatriate assignment management poses a crucial challenge for international human resource managers (Black, 1990, Black and Mendenhall, 1990 and Black and Stephens, 1989). Historically, past literature has primarily highlighted and investigated expatriation issues of MNCs in Western countries; yet in the words of Adler, Doktor, and Redding (1986, p.296), “Paralleling the shift of business from the Atlantic to the Pacific Basin, we move from the field's conceptually Occidental history to an Oriental perspective.” In Asia, foreign-directed investment (FDI) based in Taiwan is becoming a major source of economic strength. The aggressive outbound investments of Taiwanese enterprises in Southeast Asia have had a substantial impact on the economic development of the Pacific region (Lee, 1994 and Liang, 2004). According to the Taiwan Ministry of Economic Affairs (2007), Taiwan has been the second largest investor in Vietnam from 1995 until the present, and led investment in Malaysia from 1990 to 1996. Aggressive Taiwanese investment in China since the opening of trade between these two societies in 2000 has also been witnessed. The most recent statistics, released by the Taiwan Ministry of Economic Affairs in April 2010, show that Taiwanese companies invested US$35.8 billion in China from January to April 2010. The investigation of Taiwanese business practices is taking on added significance, not only because of the increasing stature of Taiwanese investment in Asian nations such as China, Vietnam and Malaysia, but also because of the roles played by these nations in the world economy (Lin & Wei, 2005). One feature of this research is the focus on expatriation management in Taiwan, considering its increasing FDI in China and Southeast Asian countries. In addition, with the prevalence of Confucian culture in Asia, the findings may serve as a supplement to expatriation management practices in the West. This study also takes a more comprehensive view than do previous international comparative studies which are limited to the following one or two specific issues, such as the expatriate's personality, international adjustment, selection and staffing, compensation, and performance appraisal (Bhaskar-Shrinivas et al., 2005, Bolino and Feldman, 2000, Caligiuri et al., 2001, Gregersen et al., 1996, Mendenhall and Oddou, 1985, Peltokorpi, 2008, Ronen, 1990, Shen, 2006 and Suutari and Brewster, 2000). Furthermore, the findings of this extensive literature provide future researchers with a basic, yet comprehensive understanding of this field of study. With Taiwanese companies' successful international expansion in spite of constrained resources during the past few decades, our research may shed some light for companies in emerging economies or with resource constraints. Specifically, this study attempts to uncover the concerns over expatriation management through the academic research lens in both Taiwan and the West. This paper first introduces the purpose of conducting the expatriation management research of Taiwan as a supplement to what has been promoted in the West. Then, it describes the data sources. Afterwards, it presents the research results and derives relative propositions. It delineates the stage development of expatriation management research, and finally, it concludes with implications for further research.

In the era of hyper competition, qualified human resources with a certain caliber who can travel internationally, and then perform and excel are sought-after. Effective expatriation management is the winning strategy in the global economy. With an extensive literature review, this study unveils the evolution of expatriation management research reflecting the social concerns of the West and Taiwan over different stages. Table 1, Table 2, Table 3, Table 4, Table 5 and Table 6 summarize relevant variables investigated in the last four decades, which provide a valuable and comprehensive picture of this field of study for interested researchers. Specifically, this study sets out to compare the commonly mentioned concerns of expatriation management, including selection criteria, staffing, training, the female expatriates, expatriate spouses, and international adjustment between the West and Taiwan. After an in-depth literature review, we found that guanxi is a very important dimension that cannot be ignored in the Asian context. As a result, we elaborated upon the influence of guanxi on expatriation management. From a guanxi point of view, the concept of agency theory may not be applied well to the manager–expatriate relationship in Taiwan. At most, it is the benevolent agency relationship as Cruz, Gomez-Mejia, and Becerra (2010) pose it. In general, there are similar core concerns irrespective of regions, such as a given expatriate's professional knowledge, personality, and international adjustment. Context-specific concerns include such issues as the fact that Taiwanese companies care more about expatriates' personal skills and willpower, and that expatriates face the problems of job overload and family separation. Yet in the West, companies care more about past performance and adaptability, while expatriate international adjustment and spouse-related issues are the main problems. The major limitation of this research is that we are not able to include all of the published articles on expatriation management in the West due to accessibility and time constraints. However, with the intention to report “certified knowledge,” we are confident that the papers we reviewed are representative in terms of social concerns. Another limitation is that we include students' theses for a more meaningful comparison, yet the rationale for their inclusion is described in the data sources section. In addition, we provide a separate column reporting students' theses for the reader to choose a specific basis for comparison. Our study highlights a number of areas for future research. First, the knowledge transfer of repatriates is a vital area, as they act as a link between headquarters and foreign subsidiaries, and a great amount of information moves through their hands (Lazarova and Cerdin, 2007, Lazarova and Tarique, 2005 and Riusala and Suutari, 2004). Organizations that can leverage repatriates' knowledge sharing should be future winners. Up to the present, little research has touched upon this issue. Second, innovative expatriation systems which utilize female resources, spousal resources, commuting expatriation, shared or rotational expatriation, and virtual international assignment can be explored. Third, testing the propositions suggested by this study may show a different perspective of expatriation management, particularly for resource constrained companies. Fourth, how and why the resource constrained SMEs are successful in international expansion, particularly how the managers motivate initially unwilling expatriates to perform successfully, is worthy of investigation. Fifth, similar comparisons between the West and other Eastern societies can further fortify current research findings. This study reviews a large body of Western expatriation management literature; the unfolding of the development of this field by stages is valuable for future studies. In addition, this study provides the firsthand information, which cannot be easily obtained by Western researchers, concerning the active FDI expatriation management practices in China and Southeast Asia that have mainly driven recent Asian economic development. Furthermore, our research results based on very different cultural contexts from previous Western and MNCs studies serve as a supplement to a better understanding of expatriation management. As more and more resource conscious SMEs are moving to compete in the international arena, their innovation, flexibility, and speed may become future key drivers in the development of the global economy. Therefore, attending to their international management needs becomes a pressing issue. Hopefully, the findings of this study have policy and practical implications for interested parties and emerging economies.