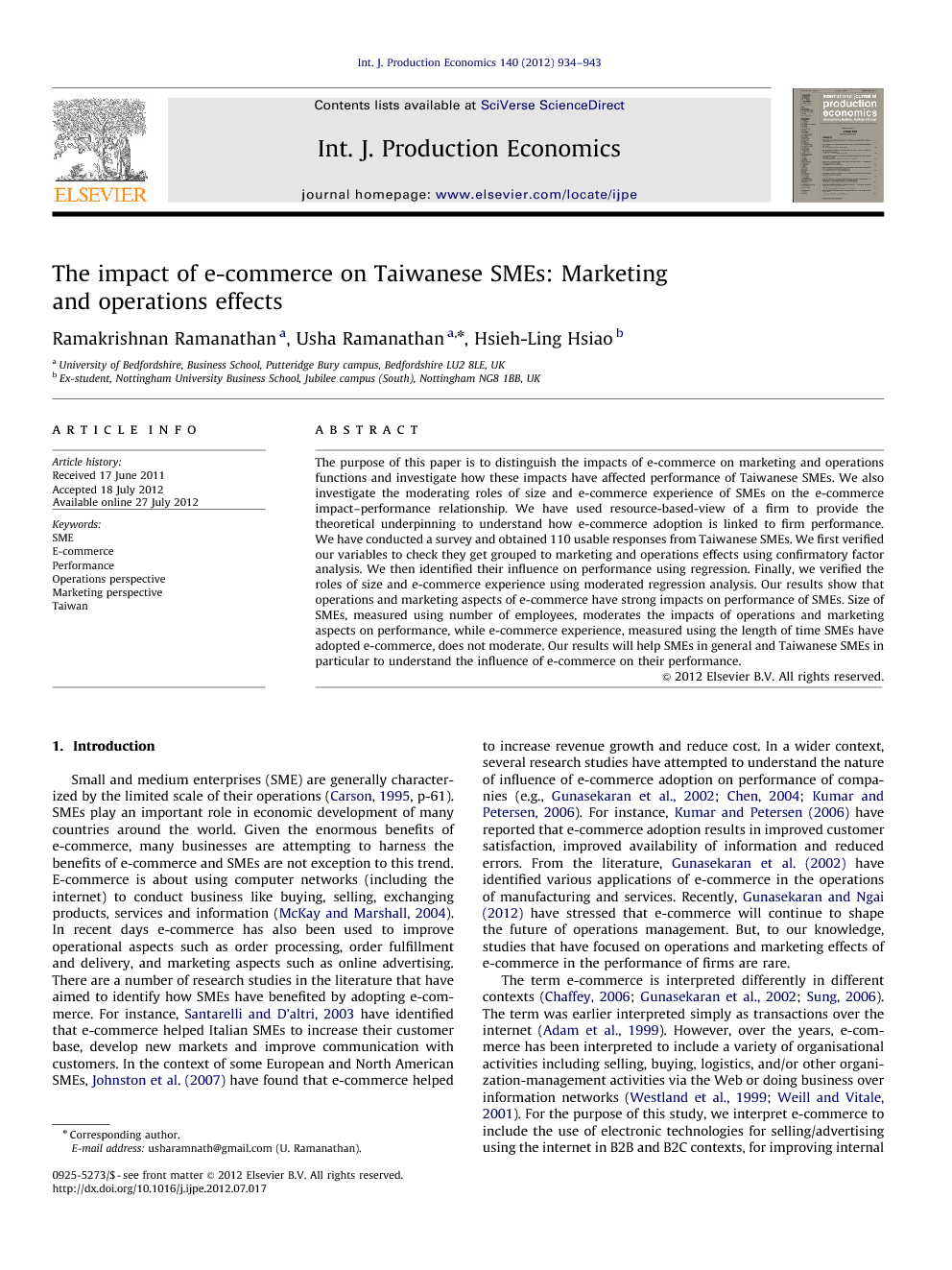 Small and medium enterprises (SME) are generally characterized by the limited scale of their operations (Carson, 1995, p-61). SMEs play an important role in economic development of many countries around the world. Given the enormous benefits of e-commerce, many businesses are attempting to harness the benefits of e-commerce and SMEs are not exception to this trend. E-commerce is about using computer networks (including the internet) to conduct business like buying, selling, exchanging products, services and information (McKay and Marshall, 2004). In recent days e-commerce has also been used to improve operational aspects such as order processing, order fulfillment and delivery, and marketing aspects such as online advertising. There are a number of research studies in the literature that have aimed to identify how SMEs have benefited by adopting e-commerce. For instance, Santarelli and D’altri, 2003 have identified that e-commerce helped Italian SMEs to increase their customer base, develop new markets and improve communication with customers. In the context of some European and North American SMEs, Johnston et al. (2007) have found that e-commerce helped to increase revenue growth and reduce cost. In a wider context, several research studies have attempted to understand the nature of influence of e-commerce adoption on performance of companies (e.g., Gunasekaran et al., 2002, Chen, 2004 and Kumar and Petersen, 2006). For instance, Kumar and Petersen (2006) have reported that e-commerce adoption results in improved customer satisfaction, improved availability of information and reduced errors. From the literature, Gunasekaran et al. (2002) have identified various applications of e-commerce in the operations of manufacturing and services. Recently, Gunasekaran and Ngai (2012) have stressed that e-commerce will continue to shape the future of operations management. But, to our knowledge, studies that have focused on operations and marketing effects of e-commerce in the performance of firms are rare. The term e-commerce is interpreted differently in different contexts (Chaffey, 2006, Gunasekaran et al., 2002 and Sung, 2006). The term was earlier interpreted simply as transactions over the internet (Adam et al., 1999). However, over the years, e-commerce has been interpreted to include a variety of organisational activities including selling, buying, logistics, and/or other organization-management activities via the Web or doing business over information networks (Westland et al., 1999 and Weill and Vitale, 2001). For the purpose of this study, we interpret e-commerce to include the use of electronic technologies for selling/advertising using the internet in B2B and B2C contexts, for improving internal functions (such as order processing/fulfilment), and for facilitating communications among supply chain partners. Our interpretation is based on several relevant previous studies including (Cagliano et al., 2003, Clayton and Waldron, 2003, George, 2001, Kumar and Petersen, 2006, Soliman and Youssef, 2003 and Turley, 2001). In this paper, we focus on Taiwanese SMEs. It is said that Taiwanese SMEs experienced their golden age in the late 1970s and early 1980s. During this period, they accounted for 70% of total exports. They also accounted for nearly 97% of the total number of enterprises in Taiwan until (SMEA, 1991, 2007). Unfortunately, over the years, the numbers of SMEs and the amount of exports have started declining. Subsequently, SMEs in Taiwan have started realizing the importance of employing innovative business structures with opportunities to employ new technologies (Daniel and Grimshaw, 2002). Thanks to the enormous breakthroughs in Information Technology (IT) and e-commerce, several businesses have begun to harness its potential to achieve competitive advantage and SMEs also followed this trend (Taylor and Murphy, 2004 and Oke et al., 2007). There are only a few studies on the adoption of e-commerce in the context of Taiwanese SMEs (Chen, 2004 and Chu, 2009). Based on a review of the literature, this study has found two important gaps. First, there are only a few studies (e.g., (Chen, 2004 and Chu, 2009)) looking at Taiwanese SMEs on the impact of e-commerce on performance. Second, while most of the studies have focused on the general influence of e-commerce on firm performance, there seems to be relatively few studies that attempted to understand the influence of e-commerce on various functional aspects in a business. On the other hand, there are studies that have highlighted that e-commerce can be applied differently in different functions, such as sales or logistics planning and on time delivery (Barnes et al., 2004 and Ramanathan, 2011). Hence, it makes sense to study the impacts of e-commerce on various functions of a firm. To fill these two gaps, we distinguish impacts of e-commerce on two major functions, namely marketing and operations, and study how these two influence performance of Taiwanese SMEs. In addition, we also test whether the length of experience of a firm after adopting e-commerce or its size have a moderating influence on the impact of e-commerce. To do our analysis, we have collected data from Taiwanese SMEs using specially designed questionnaire. In this research we have used resource-based-view as our theoretical underpinning, which is further explained in Section 2. Rest of the paper is organized as follows. Section 2 outlines the existing literature and develops research hypothesis. Section 3 describes the research method used in this paper with specific importance to survey questionnaire. Data analysis and results are discussed in Section 4. Section 5 discusses the results further. Section 6 concludes this paper with details on managerial implications, limitations of our study and scope for future research.