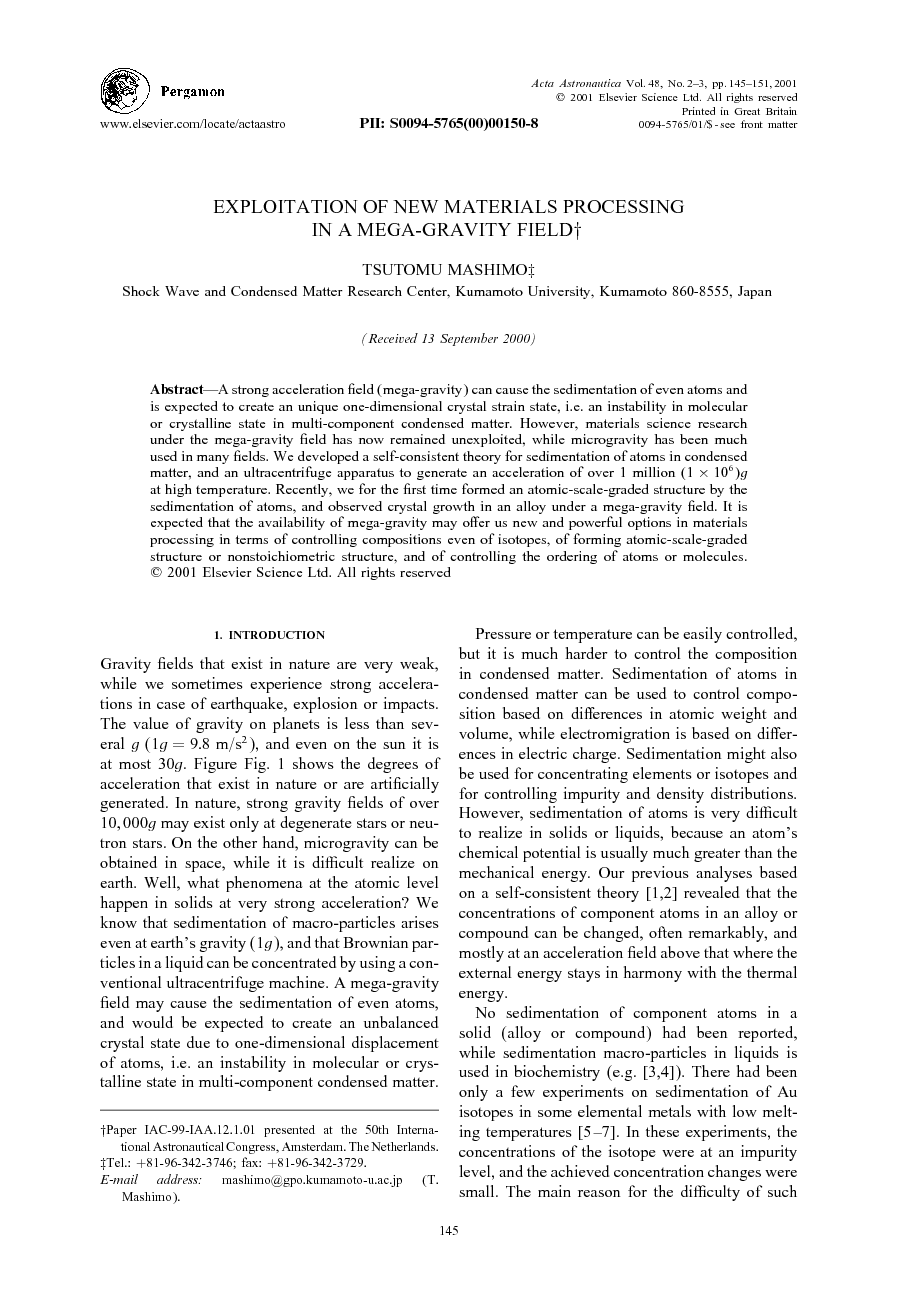 A strong acceleration field (mega-gravity) can cause the sedimentation of even atoms and is expected to create an unique one-dimensional crystal strain state, i.e. an instability in molecular or crystalline state in multi-component condensed matter. However, materials science research under the mega-gravity field has now remained unexploited, while microgravity has been much used in many fields. We developed a self-consistent theory for sedimentation of atoms in condensed matter, and an ultracentrifuge apparatus to generate an acceleration of over 1 million (1×106)g at high temperature. Recently, we for the first time formed an atomic-scale-graded structure by the sedimentation of atoms, and observed crystal growth in an alloy under a mega-gravity field. It is expected that the availability of mega-gravity may offer us new and powerful options in materials processing in terms of controlling compositions even of isotopes, of forming atomic-scale-graded structure or nonstoichiometric structure, and of controlling the ordering of atoms or molecules.

Gravity fields that exist in nature are very weak, while we sometimes experience strong accelerations in case of earthquake, explosion or impacts. The value of gravity on planets is less than several View the MathML source, and even on the sun it is at most 30g. Figure Fig. 1 shows the degrees of acceleration that exist in nature or are artificially generated. In nature, strong gravity fields of over 10,000g may exist only at degenerate stars or neutron stars. On the other hand, microgravity can be obtained in space, while it is difficult realize on earth. Well, what phenomena at the atomic level happen in solids at very strong acceleration? We know that sedimentation of macro-particles arises even at earth's gravity (1g), and that Brownian particles in a liquid can be concentrated by using a conventional ultracentrifuge machine. A mega-gravity field may cause the sedimentation of even atoms, and would be expected to create an unbalanced crystal state due to one-dimensional displacement of atoms, i.e. an instability in molecular or crystalline state in multi-component condensed matter. Full-size image (6 K) Fig. 1. Acceleration fields that exist in nature or are artificially generated. Figure options Pressure or temperature can be easily controlled, but it is much harder to control the composition in condensed matter. Sedimentation of atoms in condensed matter can be used to control composition based on differences in atomic weight and volume, while electromigration is based on differences in electric charge. Sedimentation might also be used for concentrating elements or isotopes and for controlling impurity and density distributions. However, sedimentation of atoms is very difficult to realize in solids or liquids, because an atom's chemical potential is usually much greater than the mechanical energy. Our previous analyses based on a self-consistent theory [1] and [2] revealed that the concentrations of component atoms in an alloy or compound can be changed, often remarkably, and mostly at an acceleration field above that where the external energy stays in harmony with the thermal energy. No sedimentation of component atoms in a solid (alloy or compound) had been reported, while sedimentation macro-particles in liquids is used in biochemistry (e.g. [3] and [4]). There had been only a few experiments on sedimentation of Au isotopes in some elemental metals with low melting temperatures [5], [6] and [7]. In these experiments, the concentrations of the isotope were at an impurity level, and the achieved concentration changes were small. The main reason for the difficulty of such experiments in solids has been that there was no ultracentrifuge machine that simultaneously generated on the order of 106g and operated at high temperature. If such ultracentrifuge technology were established, it is expected that a new extreme-conditions science of strong acceleration fields in condensed matter and related application research would be started in many fields. In 1996, we developed an ultracentrifuge apparatus that can generate acceleration fields of over 106g at temperatures of several hundreds °C for several days [8]. Recently, we succeeded in forming composition distributions due to sedimentation of component atoms in an alloy [9]. In the present paper, the history and the recent progress of studies under a strong acceleration field are reviewed. The effect of a strong acceleration field on atoms, molecules and crystals in condensed matter, along with possible applications, are discussed on the basis of the theoretical and experimental results.

The results on the Bi–Sb system alloy provided the first evidence of sedimentation of component atoms and crystal growth in an alloy under a strong gravity field. Recently, we observed the sedimentation of atoms also in several other alloys, compounds and polymers, and related phase instabilities that indicated a change in crystal structure or phase diagram could be induced by strong acceleration. The sedimentation of atoms in solids or liquids can be used to concentrate elements or even isotopes, and to control compositions or impurities. We can also use it to form a graded structure on an atomic scale in solids, while it is very difficult to prepare the atomic-scale-graded bulk materials by conventional methods such as sintering, self-combustion, or plasma injection. It may be possible to form a nonstoichiometric structure or nano–mezo composite structure in solids. The one-dimensional displacement of atoms induced by mega-g may also affect the ordering and orientation of atoms or molecules, and enhance crystal growth. It is also expected that chemical or phase stability would change, inducing related changes in physical properties in solids. In addition, the unbalanced crystal state may be used for the study of lattice dynamics or equation of state of solids. The authors would like to emphasize that the mega-gravity field has direct effects on atoms or molecules, while the microgravity field has been used negatively to suppress the convection or sedimentation of macro-particles in materials science. It is expected that such effects will be used as a powerful new tool, in many fields such as metallurgy, semiconductor science, polymer science, crystal chemistry, solid-state physics, nucleonics, space science, etc. We have already began to further explore the role of the mega-gravity field in materials science.