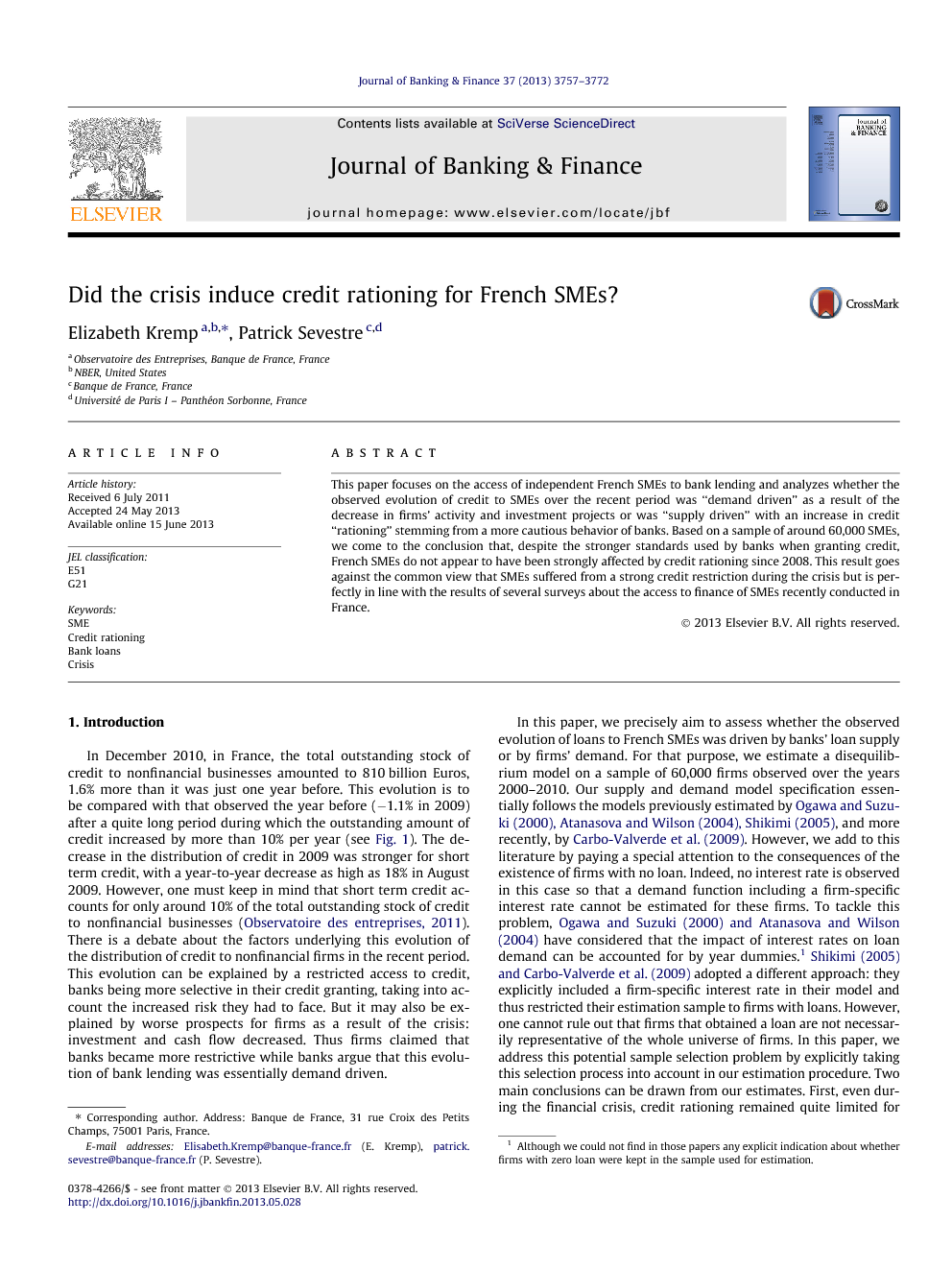 This paper focuses on the access of independent French SMEs to bank lending and analyzes whether the observed evolution of credit to SMEs over the recent period was “demand driven” as a result of the decrease in firms’ activity and investment projects or was “supply driven” with an increase in credit “rationing” stemming from a more cautious behavior of banks. Based on a sample of around 60,000 SMEs, we come to the conclusion that, despite the stronger standards used by banks when granting credit, French SMEs do not appear to have been strongly affected by credit rationing since 2008. This result goes against the common view that SMEs suffered from a strong credit restriction during the crisis but is perfectly in line with the results of several surveys about the access to finance of SMEs recently conducted in France.

In December 2010, in France, the total outstanding stock of credit to nonfinancial businesses amounted to 810 billion Euros, 1.6% more than it was just one year before. This evolution is to be compared with that observed the year before (−1.1% in 2009) after a quite long period during which the outstanding amount of credit increased by more than 10% per year (see Fig. 1). The decrease in the distribution of credit in 2009 was stronger for short term credit, with a year-to-year decrease as high as 18% in August 2009. However, one must keep in mind that short term credit accounts for only around 10% of the total outstanding stock of credit to nonfinancial businesses (Observatoire des entreprises, 2011). There is a debate about the factors underlying this evolution of the distribution of credit to nonfinancial firms in the recent period. This evolution can be explained by a restricted access to credit, banks being more selective in their credit granting, taking into account the increased risk they had to face. But it may also be explained by worse prospects for firms as a result of the crisis: investment and cash flow decreased. Thus firms claimed that banks became more restrictive while banks argue that this evolution of bank lending was essentially demand driven.In this paper, we precisely aim to assess whether the observed evolution of loans to French SMEs was driven by banks’ loan supply or by firms’ demand. For that purpose, we estimate a disequilibrium model on a sample of 60,000 firms observed over the years 2000–2010. Our supply and demand model specification essentially follows the models previously estimated by Ogawa and Suzuki, 2000, Atanasova and Wilson, 2004 and Shikimi, 2005, and more recently, by Carbo-Valverde et al. (2009). However, we add to this literature by paying a special attention to the consequences of the existence of firms with no loan. Indeed, no interest rate is observed in this case so that a demand function including a firm-specific interest rate cannot be estimated for these firms. To tackle this problem, Ogawa and Suzuki, 2000 and Atanasova and Wilson, 2004 have considered that the impact of interest rates on loan demand can be accounted for by year dummies.1Shikimi, 2005 and Carbo-Valverde et al., 2009 adopted a different approach: they explicitly included a firm-specific interest rate in their model and thus restricted their estimation sample to firms with loans. However, one cannot rule out that firms that obtained a loan are not necessarily representative of the whole universe of firms. In this paper, we address this potential sample selection problem by explicitly taking this selection process into account in our estimation procedure. Two main conclusions can be drawn from our estimates. First, even during the financial crisis, credit rationing remained quite limited for French SMEs. Even though banks decreased their loan supply by adopting more restrictive lending standards, especially regarding weaker firms, firms’ demand for new loans decreased even more strongly due to the deterioration of the economic environment. This result is in line with the low rationing estimates obtained from surveys that have been implemented recently about firms’ access to finance (e.g. the ECB SAFE survey, 2009, 2010a, 2010b, 2011). Second, allowing for the endogenous selection of firms does have an impact on the estimation results: the magnitude of most parameters in the model increase quite significantly. In particular, the estimated elasticity of demand to the interest rate strongly increases when selection is taken into account. These estimates changes lead to an increase in the estimated extent of credit rationing, which however remains at a low level. In the next section, we present our model and the econometric procedure and state how they relate to the existing literature. Our data are presented in Section 3. Section 4 is devoted to the presentation and discussion of our econometric results and Section 5 to our estimates of credit rationing. Finally, we assess the consequences of accounting or not for the likely endogenous selection of the sample in Section 6. Section 7 concludes.

In this paper, we focus on the access of independent SMEs to bank lending and analyze whether the observed evolution of credit over the recent period was “demand driven” as a result of the decrease in firms’ activity and investment projects or was “supply driven” with an increase in credit “rationing” stemming from a more cautious behavior of banks. Our main conclusion is that, despite a more cautious lending behavior of banks, SMEs have not been strongly affected by credit rationing, even since 2008. The major part of the observed decrease in loans outstandings is explained by the decrease in firms’ demand for credit, stemming from the strong decrease of their activity and investment projects. This result goes against the common view that SMEs suffered from a strong credit restriction during the crisis. Our conclusion is also reached by Rottmann and Wollmershaüser (2012) regarding German SMEs (see their Fig. 2) and is perfectly in line with the results of several surveys recently conducted in France about the access of small and medium-sized enterprises to bank loans.