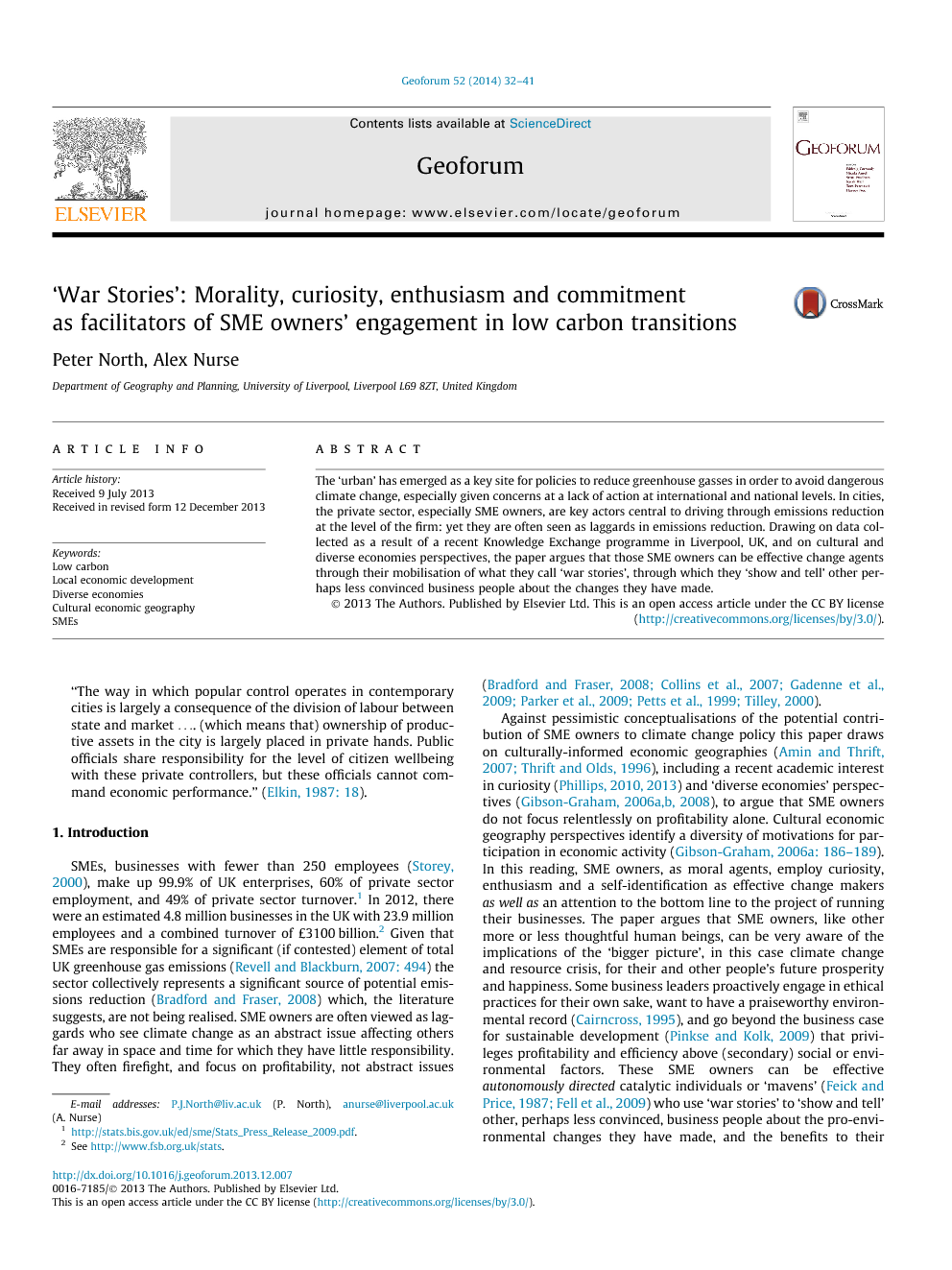 The ‘urban’ has emerged as a key site for policies to reduce greenhouse gasses in order to avoid dangerous climate change, especially given concerns at a lack of action at international and national levels. In cities, the private sector, especially SME owners, are key actors central to driving through emissions reduction at the level of the firm: yet they are often seen as laggards in emissions reduction. Drawing on data collected as a result of a recent Knowledge Exchange programme in Liverpool, UK, and on cultural and diverse economies perspectives, the paper argues that those SME owners can be effective change agents through their mobilisation of what they call ‘war stories’, through which they ‘show and tell’ other perhaps less convinced business people about the changes they have made.

SMEs, businesses with fewer than 250 employees (Storey, 2000), make up 99.9% of UK enterprises, 60% of private sector employment, and 49% of private sector turnover.1 In 2012, there were an estimated 4.8 million businesses in the UK with 23.9 million employees and a combined turnover of £3100 billion.2 Given that SMEs are responsible for a significant (if contested) element of total UK greenhouse gas emissions (Revell and Blackburn, 2007: 494) the sector collectively represents a significant source of potential emissions reduction (Bradford and Fraser, 2008) which, the literature suggests, are not being realised. SME owners are often viewed as laggards who see climate change as an abstract issue affecting others far away in space and time for which they have little responsibility. They often firefight, and focus on profitability, not abstract issues (Bradford and Fraser, 2008, Collins et al., 2007, Gadenne et al., 2009, Parker et al., 2009, Petts et al., 1999 and Tilley, 2000). Against pessimistic conceptualisations of the potential contribution of SME owners to climate change policy this paper draws on culturally-informed economic geographies (Amin and Thrift, 2007 and Thrift and Olds, 1996), including a recent academic interest in curiosity (Phillips, 2010 and Phillips, 2013) and ‘diverse economies’ perspectives (Gibson-Graham, 2006a, Gibson-Graham, 2006b and Gibson-Graham, 2008), to argue that SME owners do not focus relentlessly on profitability alone. Cultural economic geography perspectives identify a diversity of motivations for participation in economic activity (Gibson-Graham, 2006a: 186–189). In this reading, SME owners, as moral agents, employ curiosity, enthusiasm and a self-identification as effective change makers as well as an attention to the bottom line to the project of running their businesses. The paper argues that SME owners, like other more or less thoughtful human beings, can be very aware of the implications of the ‘bigger picture’, in this case climate change and resource crisis, for their and other people’s future prosperity and happiness. Some business leaders proactively engage in ethical practices for their own sake, want to have a praiseworthy environmental record ( Cairncross, 1995), and go beyond the business case for sustainable development ( Pinkse and Kolk, 2009) that privileges profitability and efficiency above (secondary) social or environmental factors. These SME owners can be effective autonomously directed catalytic individuals or ‘mavens’ ( Feick and Price, 1987 and Fell et al., 2009) who use ‘war stories’ to ‘show and tell’ other, perhaps less convinced, business people about the pro-environmental changes they have made, and the benefits to their business that have resulted from them. These catalytic individuals validate previously unfamiliar information, technologies and processes to other SME owners, people similar to themselves, and help diffuse processes of socio-technical change more broadly. Given that, in the UK at least, the Coalition government stresses market mechanisms to solve problems, and argues that if the state withdraws citizens will step up and address their issues autonomously ( North, 2011a), the identification of new actors with the skills to solve problems associated with climate change and communicate them more widely to people ‘like them’ and who they respect is of interest. Further, given recent interest in the materiality of flows of resources ( Rutherford, 2013), and of urban metabolisms in energy transitions ( Kennedy et al., 2011) the transition to a low carbon economy needs a wider transformation of everyday systems and practices of energy and resource consumption ( Shove and Walker, 2010) which will require private sector engagement. The argument is developed as follows. After a discussion of the research methods used, the paper reviews the literature on the business case for engagement in sustainable development, with an emphasis on why SME owners do or do not engage in environmental action. The contribution of cultural and diverse economic geographies to this debate is introduced. The paper then draws on action research findings to explore our hypothesis: to what extent do cultural and diverse economies perspectives contribute to a conceptualisation of SME owners as proactive environmental actors in the context of the transition to a low carbon economy? Finally, policy suggestions are provided to facilitate further engagement of SME owners in the development of low carbon economies.

Where then is the politics of hope here? It is that just as a lack of action at an international level has spurred action to reduce greenhouse gasses at lower urban and community levels, our research has uncovered many more ways of engaging with businesspeople to do the hard work of the transition to a low carbon economy that more pessimistic analyses of capitalism as irredeemably ecocidal would occlude. Local action on climate need not wait for the revolution (cf. Gibson-Graham, 2006a: 251). The power of state actors to influence agents they do not control is limited, and even well-funded agencies will be ineffective if their advice is not acted on (Granek and Hassanali, 2006) with the result that interventions aimed at SMEs can be disappointing (Friedman and Miles, 2002). The good news is that if action from the top down is not always effective, conversely, its absence need not be a disaster. Our findings are of interest in showing the diversity of ways in which businesspeople can come across information about climate change and resource crises through their own rhizomatic searches online which they then use to guide their discussions with business advisers. It shows they are driven by curiosity and care for the future, not just by profit maximisation. Here, the process of knowledge construction is owned by and constituted by the business owner in a ‘hybrid entanglement’ of ethical, cultural and business discourses, driven through a conception that something must be done, curiosity about what the issues are and what the solutions are, and persistence in driving issues through networks and through the encouragement of peers, customers, suppliers and staff. In local urban climate change policy terms perhaps we need to be more open to the possibility of conceptualising the local private sector as local actors capable of autonomously generating environmental solutions, and, crucially, spreading them to other less innovative businesses. That SME owners engaging with the morality of anthropogenic climate change can employ curiosity, enthusiasm and a self-identification as effective change makers to the project of the transition to a low carbon economy in the context of their own business will not perhaps be that surprising to culturally-informed economic geographers. It may be new to economic development managers schooled, unknowingly, in the vernacular ‘common sense’ associated with the entrepreneurial cities (Harvey, 1989) paradigm which assumes that inter-urban competition for footloose capital is the object of economic development policy, and that anything that does not create new jobs and businesses is ruled out of court. War stories may be a tool to widen discussions of low carbon transitions out of the constraints of debates about how to maximize growth in sustainable ways (Bulkeley, 2013: 102–3). If SME owners can make an impact on 4.8 million businesses responsible for 60% of industrial emissions that is a worthwhile contribution from actors often seen as barriers to change, not as providers of solutions.