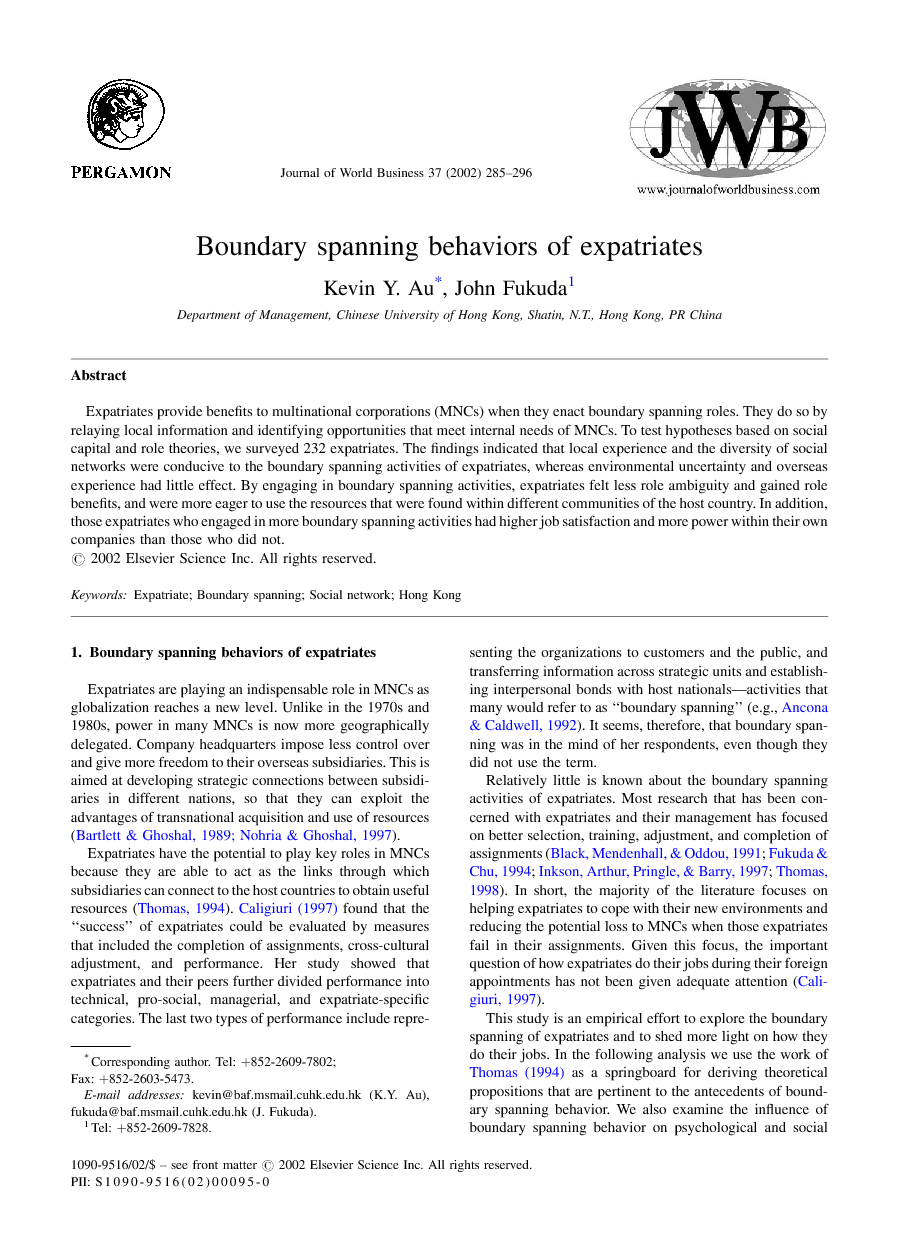 Expatriates are playing an indispensable role in MNCs as globalization reaches a new level. Unlike in the 1970s and 1980s, power in many MNCs is now more geographically delegated. Company headquarters impose less control over and give more freedom to their overseas subsidiaries. This is aimed at developing strategic connections between subsidiaries in different nations, so that they can exploit the advantages of transnational acquisition and use of resources (Bartlett & Ghoshal, 1989 and Nohria & Ghoshal, 1997). Expatriates have the potential to play key roles in MNCs because they are able to act as the links through which subsidiaries can connect to the host countries to obtain useful resources (Thomas, 1994). Caligiuri (1997) found that the “success” of expatriates could be evaluated by measures that included the completion of assignments, cross-cultural adjustment, and performance. Her study showed that expatriates and their peers further divided performance into technical, pro-social, managerial, and expatriate-specific categories. The last two types of performance include representing the organizations to customers and the public, and transferring information across strategic units and establishing interpersonal bonds with host nationals—activities that many would refer to as “boundary spanning” (e.g., Ancona & Caldwell, 1992). It seems, therefore, that boundary spanning was in the mind of her respondents, even though they did not use the term. Relatively little is known about the boundary spanning activities of expatriates. Most research that has been concerned with expatriates and their management has focused on better selection, training, adjustment, and completion of assignments (Black, Mendenhall, & Oddou, 1991; Fukuda & Chu, 1994; Inkson, Arthur, Pringle, & Barry, 1997; Thomas, 1998). In short, the majority of the literature focuses on helping expatriates to cope with their new environments and reducing the potential loss to MNCs when those expatriates fail in their assignments. Given this focus, the important question of how expatriates do their jobs during their foreign appointments has not been given adequate attention (Caligiuri, 1997). This study is an empirical effort to explore the boundary spanning of expatriates and to shed more light on how they do their jobs. In the following analysis we use the work of Thomas (1994) as a springboard for deriving theoretical propositions that are pertinent to the antecedents of boundary spanning behavior. We also examine the influence of boundary spanning behavior on psychological and social mediators, and its influence on work outcomes. Theories of role and social capital are considered to enrich our conceptualization. In particular, we postulate that expatriates are multicultural brokers for different ethnic or expatriate communities in the host country. Most expatriates are connected to both their parent MNC and their host country. They possess at least some cross-cultural experience, and are assigned managerial duties. Consequently, they are well equipped to establish social ties and bring together resources that are located within separate cultural communities (Cohen, 1977 and Fernandez & Barr, 1993). Viewing expatriates as multicultural brokers may complement the individual point of view that Thomas (1994) implied in his boundary spanning framework.