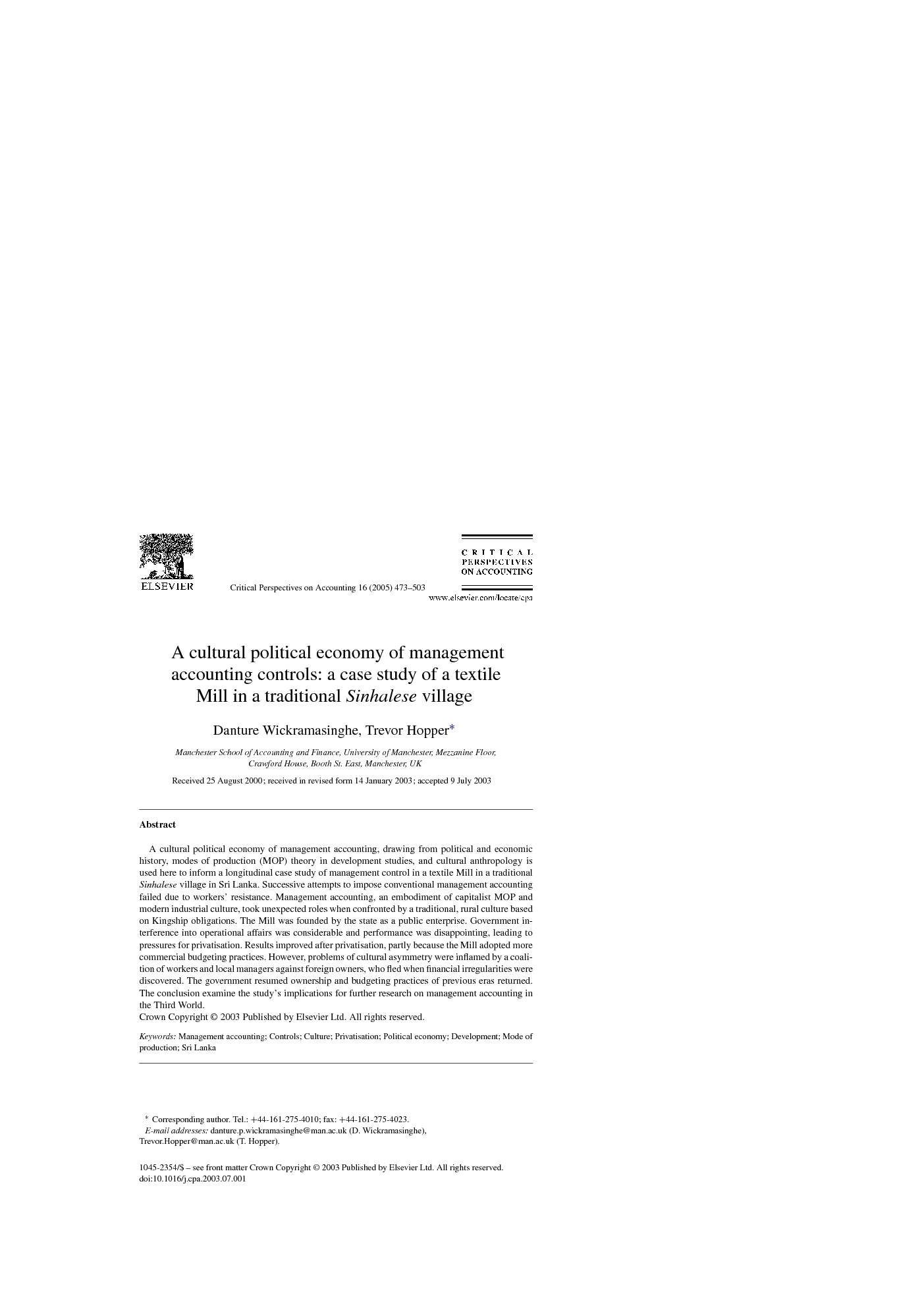 A cultural political economy of management accounting, drawing from political and economic history, modes of production (MOP) theory in development studies, and cultural anthropology is used here to inform a longitudinal case study of management control in a textile Mill in a traditional Sinhalese village in Sri Lanka. Successive attempts to impose conventional management accounting failed due to workers’ resistance. Management accounting, an embodiment of capitalist MOP and modern industrial culture, took unexpected roles when confronted by a traditional, rural culture based on Kingship obligations. The Mill was founded by the state as a public enterprise. Government interference into operational affairs was considerable and performance was disappointing, leading to pressures for privatisation. Results improved after privatisation, partly because the Mill adopted more commercial budgeting practices. However, problems of cultural asymmetry were inflamed by a coalition of workers and local managers against foreign owners, who fled when financial irregularities were discovered. The government resumed ownership and budgeting practices of previous eras returned. The conclusion examine the study’s implications for further research on management accounting in the Third World.

Most management accounting and control (MAC) research—political economy or otherwise—is in developed countries (exceptions include Hoque and Hopper, 1997 and Uddin and Hopper, 2001), so its neglect of development economics and anthropology is unsurprising. Yet, theories of cultural political economy in development studies have much in common with accounting research of a political economy hue. The latter’s argument that accounting is influenced by, and influences, the organisational and social context within which it operates (e.g. Burchell et al., 1980) is consistent with development research on modes of production (MOP) and culture (Seneviratne, 1997 and Taylor, 1979). This paper will illustrate why and how these factors are relevant to accounting in developing countries. The paper proceeds thus. First, it outlines the cultural political economy approach adopted and how it informs the case study. Second, it portrays Sri Lankan politics and village culture. Third, it describes the research methods adopted. The fourth and fifth sections analyse the case data on MAC within state capitalism and market capitalism, respectively. The conclusion discusses the findings’ implications for future MAC research of this ilk.

This paper illustrates how and why cultural and political factors are relevant to accounting in a developing country by analysing five episodes of budgeting in a Sri Lankan Mill. Idealised MACs repeatedly tried to reproduce capitalist MOPs in a village with a traditional culture and a non-capitalist MOP. They became caught in complex and indeterminate processes of transformation involving the state, political ideologies, trade unions, ethnicity and culture, organisational dynamics, financiers and markets. The paper demonstrates why culture and MACs should be studied within political economy. Events in NPC cannot be explained by culture alone and outcomes were contingent. Although culture was independent of MOPs, they were closely related and both were powerful in shaping social relations and controls (Althusser, 1995, Polanyi, 1957, Sayer, 2001, Taylor, 1979 and Williams, 1958). Similarly, the state, whilst not immune from pressures of global capital and the pursuit of its own interests, was partly reflective of, and responsive to cultural expectations whilst simultaneously being an agent of transformation. Given ethnic and cultural diversity, and different rates of adoption of non-capitalist and capitalist MOPs, cultural practices associated with MACs are unlikely to be stable or nationally consistent. MACs are not independent of culture but are an expression of a modern, urban, industrialised cultures and capitalist MOPs. Failure to recognise this carries the danger of researchers imposing their own ethnocentricity in inappropriate settings. In each budget episode workers perceived themselves as struggling for their ‘way of life’. In the village, inter-group conflict is unlikely but uniting against external powers perceived as a threat is possible, given its ethnocentric culture. There was little internalisation of capitalist values of efficiency and improvement, possibly because increases in real income had been small. Little occurred to undermine villagers’ antagonism to a conventional capitalist MAC. This was difficult for senior, non-local management to appreciate as workers invariably presented a respectful, co-operative face, whilst behaving in a contrary fashion when outside their gaze. Class, ethnic and cultural differences between managers and shop floor operators prevented problems being addressed bottom-up.