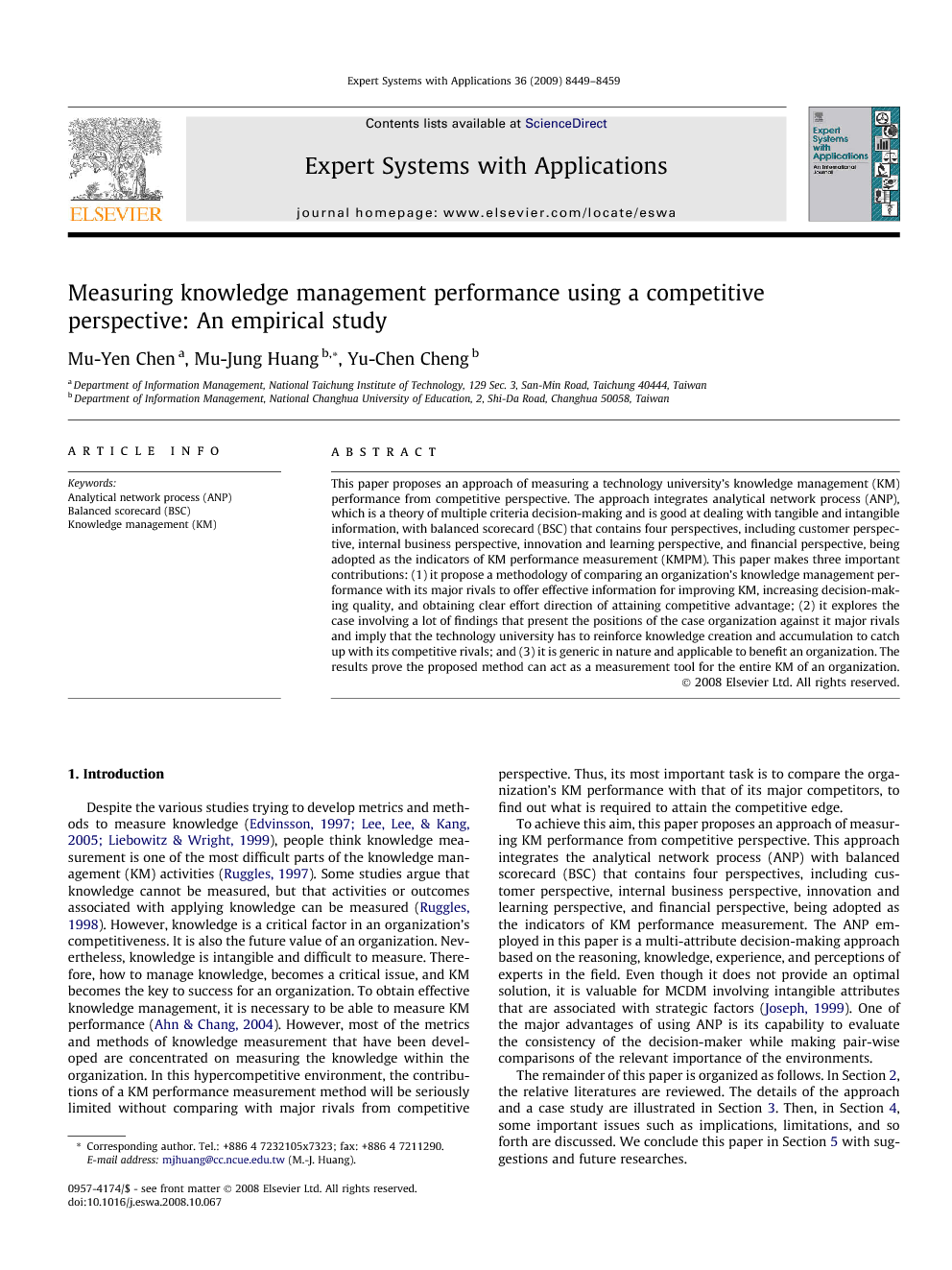 This paper proposes an approach of measuring a technology university’s knowledge management (KM) performance from competitive perspective. The approach integrates analytical network process (ANP), which is a theory of multiple criteria decision-making and is good at dealing with tangible and intangible information, with balanced scorecard (BSC) that contains four perspectives, including customer perspective, internal business perspective, innovation and learning perspective, and financial perspective, being adopted as the indicators of KM performance measurement (KMPM). This paper makes three important contributions: (1) it propose a methodology of comparing an organization’s knowledge management performance with its major rivals to offer effective information for improving KM, increasing decision-making quality, and obtaining clear effort direction of attaining competitive advantage; (2) it explores the case involving a lot of findings that present the positions of the case organization against it major rivals and imply that the technology university has to reinforce knowledge creation and accumulation to catch up with its competitive rivals; and (3) it is generic in nature and applicable to benefit an organization. The results prove the proposed method can act as a measurement tool for the entire KM of an organization.

Despite the various studies trying to develop metrics and methods to measure knowledge (Edvinsson, 1997, Lee et al., 2005 and Liebowitz and Wright, 1999), people think knowledge measurement is one of the most difficult parts of the knowledge management (KM) activities (Ruggles, 1997). Some studies argue that knowledge cannot be measured, but that activities or outcomes associated with applying knowledge can be measured (Ruggles, 1998). However, knowledge is a critical factor in an organization’s competitiveness. It is also the future value of an organization. Nevertheless, knowledge is intangible and difficult to measure. Therefore, how to manage knowledge, becomes a critical issue, and KM becomes the key to success for an organization. To obtain effective knowledge management, it is necessary to be able to measure KM performance (Ahn & Chang, 2004). However, most of the metrics and methods of knowledge measurement that have been developed are concentrated on measuring the knowledge within the organization. In this hypercompetitive environment, the contributions of a KM performance measurement method will be seriously limited without comparing with major rivals from competitive perspective. Thus, its most important task is to compare the organization’s KM performance with that of its major competitors, to find out what is required to attain the competitive edge. To achieve this aim, this paper proposes an approach of measuring KM performance from competitive perspective. This approach integrates the analytical network process (ANP) with balanced scorecard (BSC) that contains four perspectives, including customer perspective, internal business perspective, innovation and learning perspective, and financial perspective, being adopted as the indicators of KM performance measurement. The ANP employed in this paper is a multi-attribute decision-making approach based on the reasoning, knowledge, experience, and perceptions of experts in the field. Even though it does not provide an optimal solution, it is valuable for MCDM involving intangible attributes that are associated with strategic factors (Joseph, 1999). One of the major advantages of using ANP is its capability to evaluate the consistency of the decision-maker while making pair-wise comparisons of the relevant importance of the environments. The remainder of this paper is organized as follows. In Section 2, the relative literatures are reviewed. The details of the approach and a case study are illustrated in Section 3. Then, in Section 4, some important issues such as implications, limitations, and so forth are discussed. We conclude this paper in Section 5 with suggestions and future researches.