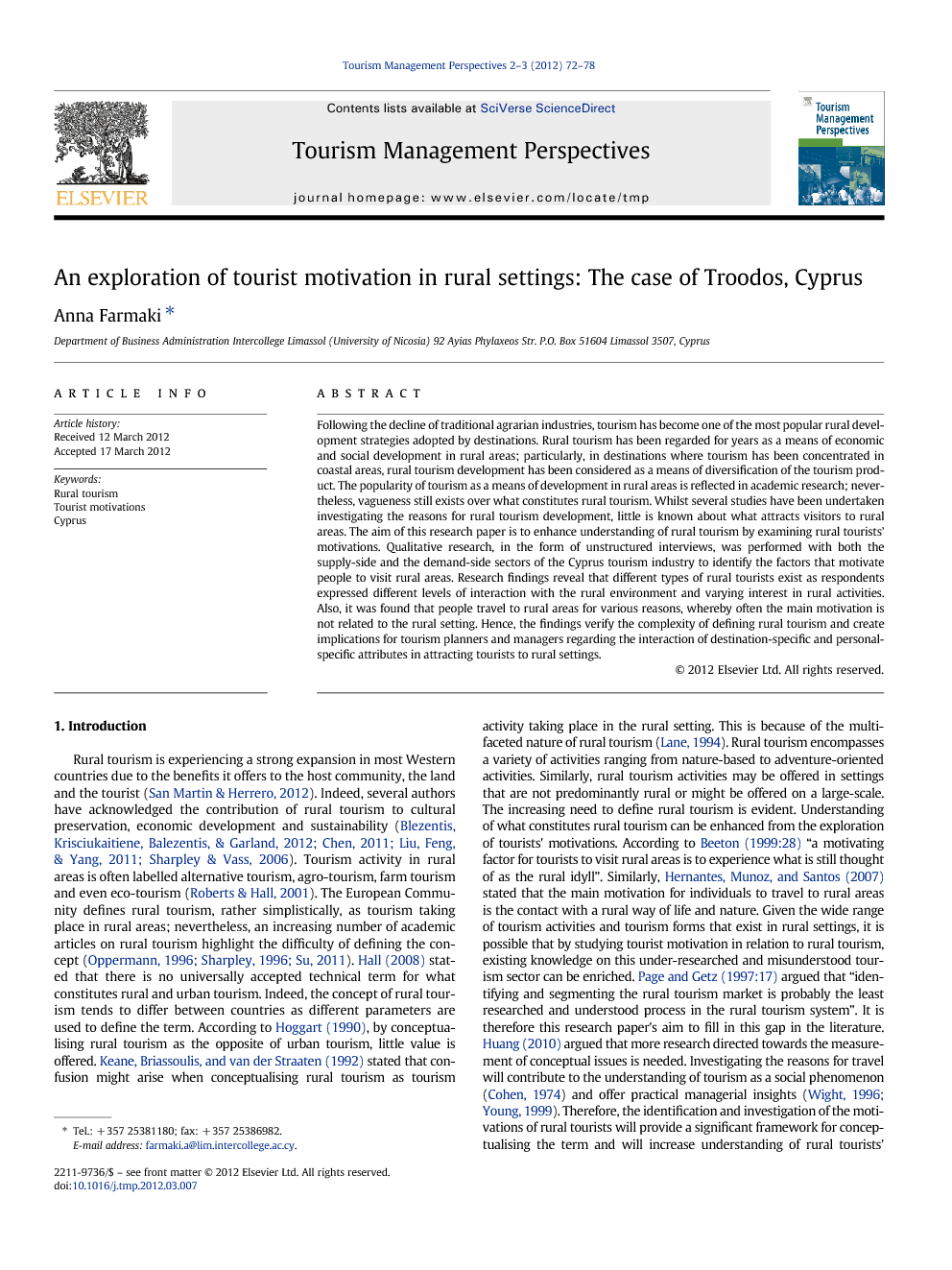 Following the decline of traditional agrarian industries, tourism has become one of the most popular rural development strategies adopted by destinations. Rural tourism has been regarded for years as a means of economic and social development in rural areas; particularly, in destinations where tourism has been concentrated in coastal areas, rural tourism development has been considered as a means of diversification of the tourism product. The popularity of tourism as a means of development in rural areas is reflected in academic research; nevertheless, vagueness still exists over what constitutes rural tourism. Whilst several studies have been undertaken investigating the reasons for rural tourism development, little is known about what attracts visitors to rural areas. The aim of this research paper is to enhance understanding of rural tourism by examining rural tourists' motivations. Qualitative research, in the form of unstructured interviews, was performed with both the supply-side and the demand-side sectors of the Cyprus tourism industry to identify the factors that motivate people to visit rural areas. Research findings reveal that different types of rural tourists exist as respondents expressed different levels of interaction with the rural environment and varying interest in rural activities. Also, it was found that people travel to rural areas for various reasons, whereby often the main motivation is not related to the rural setting. Hence, the findings verify the complexity of defining rural tourism and create implications for tourism planners and managers regarding the interaction of destination-specific and personal-specific attributes in attracting tourists to rural settings.

Rural tourism is experiencing a strong expansion in most Western countries due to the benefits it offers to the host community, the land and the tourist (San Martin & Herrero, 2012). Indeed, several authors have acknowledged the contribution of rural tourism to cultural preservation, economic development and sustainability (Blezentis et al., 2012, Chen, 2011, Liu et al., 2011 and Sharpley and Vass, 2006). Tourism activity in rural areas is often labelled alternative tourism, agro-tourism, farm tourism and even eco-tourism (Roberts & Hall, 2001). The European Community defines rural tourism, rather simplistically, as tourism taking place in rural areas; nevertheless, an increasing number of academic articles on rural tourism highlight the difficulty of defining the concept (Opperman, 1996, Sharpley, 1996 and Su, 2011). Hall (2008) stated that there is no universally accepted technical term for what constitutes rural and urban tourism. Indeed, the concept of rural tourism tends to differ between countries as different parameters are used to define the term. According to Hoggart (1990), by conceptualising rural tourism as the opposite of urban tourism, little value is offered. Keane, Briassoulis, and van der Straaten (1992) stated that confusion might arise when conceptualising rural tourism as tourism activity taking place in the rural setting. This is because of the multi-faceted nature of rural tourism (Lane, 1994). Rural tourism encompasses a variety of activities ranging from nature-based to adventure-oriented activities. Similarly, rural tourism activities may be offered in settings that are not predominantly rural or might be offered on a large-scale. The increasing need to define rural tourism is evident. Understanding of what constitutes rural tourism can be enhanced from the exploration of tourists' motivations. According to Beeton (1999:28) “a motivating factor for tourists to visit rural areas is to experience what is still thought of as the rural idyll”. Similarly, Hernantes, Munoz, and Santos (2007) stated that the main motivation for individuals to travel to rural areas is the contact with a rural way of life and nature. Given the wide range of tourism activities and tourism forms that exist in rural settings, it is possible that by studying tourist motivation in relation to rural tourism, existing knowledge on this under-researched and misunderstood tourism sector can be enriched. Page and Getz (1997:17) argued that “identifying and segmenting the rural tourism market is probably the least researched and understood process in the rural tourism system”. It is therefore this research paper's aim to fill in this gap in the literature. Huang (2010) argued that more research directed towards the measurement of conceptual issues is needed. Investigating the reasons for travel will contribute to the understanding of tourism as a social phenomenon (Cohen, 1974) and offer practical managerial insights (Wight, 1996, June 2–5 and Young, 1999). Therefore, the identification and investigation of the motivations of rural tourists will provide a significant framework for conceptualising the term and will increase understanding of rural tourists' profile. In turn, this will deepen the understanding for rural tourism demand and ultimately provide important implications for tourism researchers and tourism planners and managers alike. The following sections discuss the concept of rural tourism as defined and understood in the existing literature, highlight the importance of motivations in understanding the reasons tourists travel and present the findings on this research's attempt to conceptualise rural tourism by exploring the motivations of rural tourists.

Overall, it can be concluded that tourists travelling to the rural area of Troodos can be divided accordingly: - by purpose of travel: a) generic tourist and b) special interest tourist; - by interest: a) culture-oriented, b) nature-lovers and c) adventure-seekers and - by the level of participation/interaction: a) active/intense interaction and b) passive/moderate interaction The findings of this research have demonstrated that tourists travel to the rural area for various reasons; some travel because of an intrinsic need to escape or to relax whereas other were attracted to the region by the cultural/religious or natural attributes Troodos has. This has several implications. Firstly, it is evident that many of the tourists travelling to rural areas are interested in the rural setting; as research findings revealed many tourists expressed their desire “to escape from the city” as their main motivation for travelling to Troodos. Interestingly, no tourist interviewed expressed their interest in seeking ‘authenticity’ or ‘traditionality’. Rather, the primary purpose of visit to the rural area was interaction with nature and culture. Secondly, interaction with the locals was affected by the mode of travel; those travelling in organised groups did not interact with the local community. Thirdly, despite suggestions that rural tourism should be based on small-scale development, this research proved that several tourists attracted to rural areas stay in large hotels or in urban settings and travel to the rural area on a daily excursion. It is unknown why tourists select to stay in urban areas like the coastal cities of Cyprus instead of the rural area of Troodos. It is possible that tourist facilities in the area are of inferior quality or simply inadequate. Heitmann (2011) suggested that it is the push factors that will lead to the decision to travel but pull factors play an important role in influencing the selection of destination; hence, it is suggested that tourist facilities, being part of destination-specific attributes, will impact the decision of tourists to visit rural areas. The degree to which tourists interact with these facilities and whether they are satisfied with the amount and quality of tourist facilities available in rural areas must be further investigated. This research has demonstrated that rural tourism encompasses several attributes, which make its definition and conceptualisation difficult. The conceptualisation of rural tourism from the developmental viewpoint is not adequate, as rural accommodation and activities may be offered on a large scale whilst tourists genuinely interested in the rural setting may not stay in rural areas. Indeed, this has been evident within the Cyprus rural tourism context whereby several rural tourism accommodation units are owned by one large firm or where agrotourism units can be found in places near urban coastal cities. The confusion of what is rural is also evident in the CTO's listing of rural accommodation units, whereby traditional hotels in Troodos are not regarded as agrotouristic yet according to the Cyprus Agrotourism Company a luxury spa resort in the Pafos region constitutes an agrotourism accommodation unit. Nevertheless, the categorisation of what is agrotourism should not be based only on the accommodation available in an area but on the activities offered also. The complex nature of the tourism sector suggests that tourists travelling to rural areas might not be necessarily motivated by the rural setting but by the interest in an activity (such as culture). Should these tourists be labelled rural tourists or cultural tourists? Hence, it is obvious that more research is needed to answer such questions whereas it is obvious that the rural tourist market needs to be further segmented. This research identified several categories of rural tourists; the categorisation of the tourists was performed according to motivation of travel, their interest in the area and the level of participation with the specific interest. Motivations and activities performed are interlinked; yet the degree to which destination-specific attributes and personal-specific attributes will interact to form the desire to travel to specific rural settings must be measured in the near future as this will provide significant implications to tourism planners and managers.