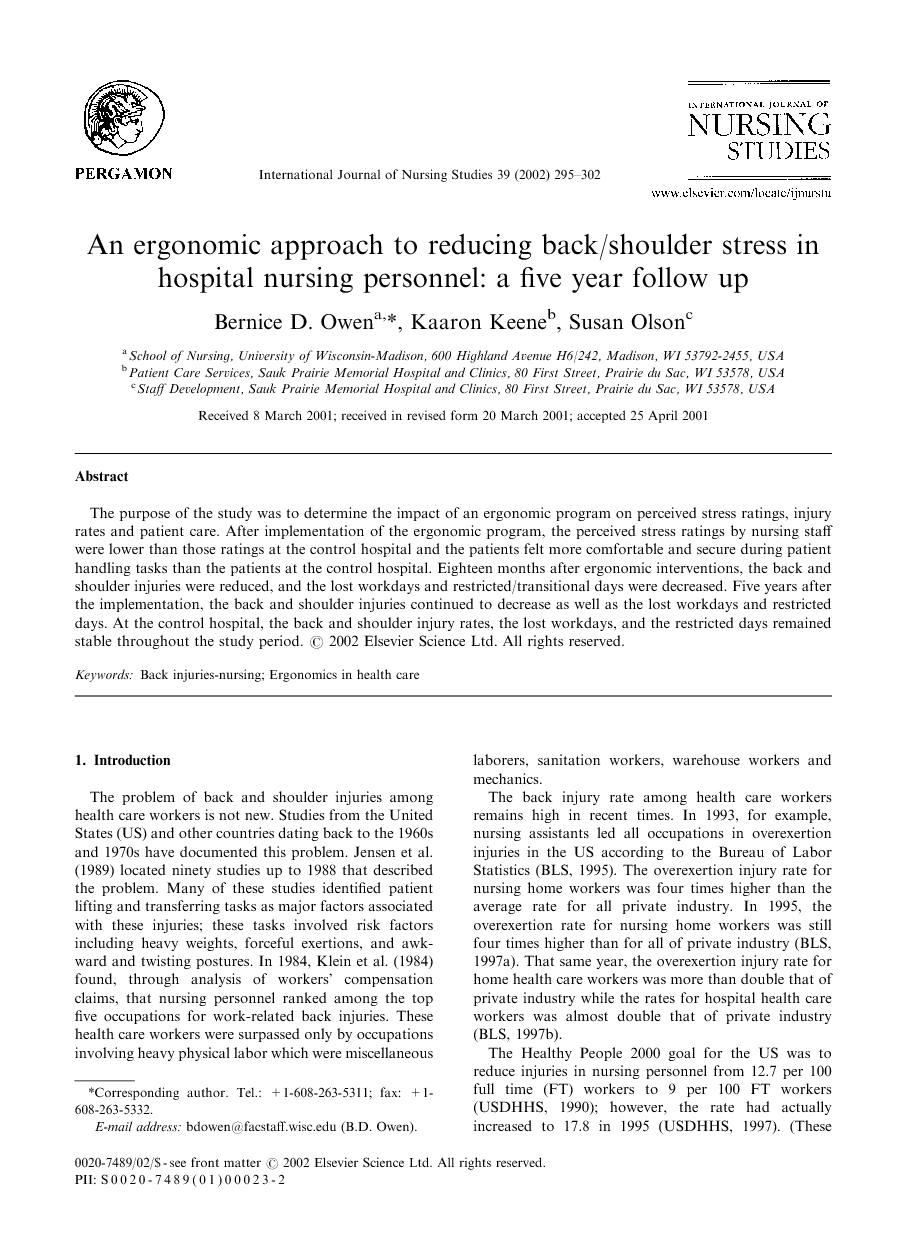 The purpose of the study was to determine the impact of an ergonomic program on perceived stress ratings, injury rates and patient care. After implementation of the ergonomic program, the perceived stress ratings by nursing staff were lower than those ratings at the control hospital and the patients felt more comfortable and secure during patient handling tasks than the patients at the control hospital. Eighteen months after ergonomic interventions, the back and shoulder injuries were reduced, and the lost workdays and restricted/transitional days were decreased. Five years after the implementation, the back and shoulder injuries continued to decrease as well as the lost workdays and restricted days. At the control hospital, the back and shoulder injury rates, the lost workdays, and the restricted days remained stable throughout the study period.

The problem of back and shoulder injuries among health care workers is not new. Studies from the United States (US) and other countries dating back to the 1960s and 1970s have documented this problem. Jensen et al. (1989) located ninety studies up to 1988 that described the problem. Many of these studies identified patient lifting and transferring tasks as major factors associated with these injuries; these tasks involved risk factors including heavy weights, forceful exertions, and awkward and twisting postures. In 1984, Klein et al. (1984) found, through analysis of workers’ compensation claims, that nursing personnel ranked among the top five occupations for work-related back injuries. These health care workers were surpassed only by occupations involving heavy physical labor which were miscellaneous laborers, sanitation workers, warehouse workers and mechanics. The back injury rate among health care workers remains high in recent times. In 1993, for example, nursing assistants led all occupations in overexertion injuries in the US according to the Bureau of Labor Statistics (BLS, 1995). The overexertion injury rate for nursing home workers was four times higher than the average rate for all private industry. In 1995, the overexertion rate for nursing home workers was still four times higher than for all of private industry (BLS, 1997a). That same year, the overexertion injury rate for home health care workers was more than double that of private industry while the rates for hospital health care workers was almost double that of private industry (BLS, 1997b). The Healthy People 2000 goal for the US was to reduce injuries in nursing personnel from 12.7 per 100 full time (FT) workers to 9 per 100 FT workers (USDHHS, 1990); however, the rate had actually increased to 17.8 in 1995 (USDHHS, 1997). (These non-fatal injuries include more than just the over exertion injuries, but these latter injuries make up the greatest numbers of injuries.) The Healthy People 2010 goals do not specifically single out nursing personnel for over exertion injuries; however, the publication does cite that low-back disorders remains a high priority for research (USDHHS, 2000). In 2000, the Bureau of Labor Statistics (BLS, 2000), reported on the incidence rates of non-fatal occupational injuries for private sector industries with 100,000 or more cases; the incidence rate for nursing and personal care facilities was second highest in the nation. Only scheduled air transportation surpassed the nursing rate. These statistics represent work-related injuries that have been reported. In the preamble to the proposed ergonomics rule, the Occupational Safety and Health Administration presented numerous studies showing that work-related musculoskeletal disorders are underreported (USDHHS, 1999). Data suggest the problem is even greater than what study data have indicated. Owen (1989) found that 38% of 503 nurses surveyed stated they had episodes of occupationally related back pain lasting more than three days, but only 34% of those with back pain actually filed an incident report. Marras et al. (1999) conducted an analysis of low-back injury risk and spinal loading during transferring and repositioning patients to investigate why health care workers are at such high risk of low-back injury. These researchers found that performing common patient handling tasks (e.g., transferring, repositioning) places excessive physical compressive force on the spine. The researchers used both a comprehensive evaluation system (low-back disorder risk model) and a theoretical model (biomechanical spinal loading model) to evaluate the risk of low-back disorder of 17 participants performing these patient handling tasks. They found many of the tasks approached and even surpassed the 6400 N maximum compression tolerance limits of force to L5S1. Even when the subjects used a draw sheet for transfer, the force to the low back exceeded the recommended compression tolerance limit established by the 1981 NIOSH Lifting Equation (USDHHS, 1981). Much of the literature on overexertion injury prevention for nursing personnel focuses on low-back injury (Charney, 1998; Holliday and Fernie, 1994; Knibbe and Friele, 1995; Owen and Garg, 1994). Lusted et al. (1996) and Owen and Fragala (1999) found stress to the shoulder area to be as high and as prevalent as stress to the low-back area as perceived by nursing personnel. However, the reported statistics center around low back overexertion rates. Lusted et al. further found the shoulder/neck symptoms were more likely to prevent nurses from doing their work than the low back symptoms and when nurses experience these upper limb symptoms, they take sick leave or rearrange their duties rather than completing a worker compensation claim. Many approaches to decreasing back/shoulder problems have been tried in general industry as well as in health care settings. Emphasis has been primarily on education and training with a definite focus on body mechanics; however, these approaches have had little impact on the problem (Daltroy, 1997; Lagerstrom and Hagberg, 1997; Personick, 1990). With these approaches, the aim has been to change the worker instead of changing the job or the task. Studies have indicated that an ergonomic approach has been successful in the laboratory setting and the long term care and hospital settings (Charney, 1998; Owen and Garg, 1993; Owen et al., 1995; Owen and Fragala, 1999; Owen and Hasler-Hanson, 1999). In this approach, the physical demands of the job are changed; it involves the assessment of stressful tasks, the development of alternative methods to decrease physical stress to the body, and application of these methods to the job. The purpose of this paper is to describe an ergonomic intervention study and the effectiveness of this program over a five year period. Preliminary data from the intervention study were published in Owen et al. (1995).

The findings of this study reinforce those found in the long term care setting by Garg and Owen (1992); in both of these studies the perceived physical stress to the back and the back injuries were reduced by changing the physical demands of the job. The perceived physical exertion was significantly reduced for all tasks at the experimental hospital. The number of back injuries, lost work, and restricted days were also decreased. If one compared the data of 18 months pre intervention to the data of 18 months post intervention, the injuries decreased to 40%, the LWDs decreased from 64 down to 3, and restricted days decreased to 20%. Therefore, the number of injuries decreased and the severity of the injuries was reduced. If the number of injuries had continued at the same pace as found in the 18 month pre intervention period, the number would have accumulated to 67 by the end of the five year follow up period; however, the actual number at the end of the follow up period was 26. The LWDs would have accumulated to 213, but the end number was 87. The RDs would have been 60 but were 55. There continued to be injuries, LWDs and RDs, but they were less than the extrapolated numbers. The patients felt more comfortable and more secure when assistive devices were used. It was important to gather patient feedback because Bell (1984) and Owen (1988) found nursing personnel were reluctant to use assistive devices because they thought patients would react negatively. In general, if the patient felt comfortable while the task was being performed, the patient felt secure also. Likewise, if the patient felt uncomfortable, he/she also felt insecure. There were a number of ergonomic elements important to the success of reducing the physical demands of the job. These included good patient assessment of mobility needs so the proper method for implementing the task could be carried out and also a good communication system so all nursing personnel knew which method to use. Proper training on how to use the assistive devices was essential. It was also important that an adequate number of assistive devices on each unit be available so they were accessible for the staff. Nursing staff informed both Bell (1984) and Owen (1988) that they would not use assistive devices because they did not know how to use them or they were not available to them on the unit. In addition, on-going support of the study by management and nursing personnel was fundamental. In this study, subjects in both hospitals rated stress to the shoulder area almost as high or even higher than stress to the back with several of the tasks. These findings are in agreement with Lusted et al. (1996) and Owen and Fragala (1999). This perceived stress to the shoulder and upper limb area should be of concern; continued research is needed to focus on this area. In conclusion, the findings of this study indicated that perceived physical stress could be reduced through the implementation of an ergonomic program, the patients felt comfortable and secured with the changes, and the injury, LWDs and RDs numbers were decreased. It was also found that the ergonomic program could be sustained over time and the injury numbers remained lower than the numbers extrapolated without an intervention program.